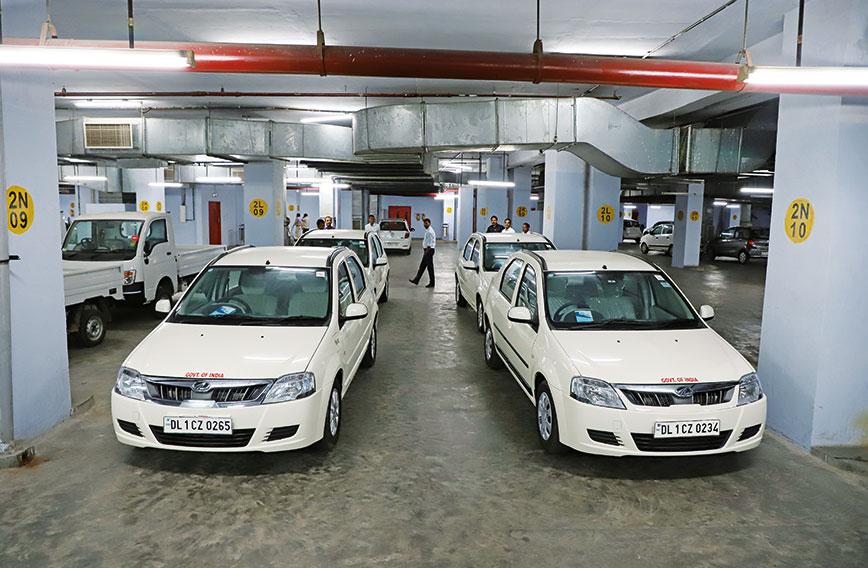 The govt bought 10,000 electric cars from Mahindra and Mahindra and Tata Motors to prime pump the market | Photo: Shrey Gupta

As air pollution levels soared in November, making it difficult to breathe in New Delhi and the surrounding National Capital Region (NCR), alarm bells for public health were ringing once again. Another year had passed without a solution in sight and the emergency measures being trotted out were the old ones — odd and even number plates, only CNG vehicles, a construction ban, no generators and an end to random burning of leaves and waste.

But what about electric vehicles? It is almost a year since the Union government set a target of going majorly electric by 2030 in personal and public transportation. Yet, not one electric bus has been put on the capital’s streets and two-wheelers and cars that run on battery are as good as non-existent.

So, what is holding up electric vehicles even as cities across the world aggressively introduce them to deal with air pollution and promote cleaner living? Are India’s big automobile manufacturers pushing back because a switch to electric vehicles disturbs their business plans? Is it the lack of infrastructure such as charging stations? Or is the absence of a  policy and direction from government coming in the way of investments and a rapid transformation?

When the target of having 30 percent of vehicles in India as electric by 2030 was declared, there was reason to cheer. A goal had been set. It was expected that a policy would follow. But soon it was made known that since a target existed, a policy wasn’t needed. The country would find its way to the target, it was said.

At NITI Aayog,  planners told Civil Society that a sudden transition was impractical. it was important to first prime-pump the electric vehicles market and create demand so that existing automobile companies could sustainably make the switch.  If cities bought buses and the government placed bulk orders for cars, capacity would increase and consumer interest would be created.

Since then, the government has bought 10,000 cars from Tata Motors and Mahindra and Mahindra. Bus orders by cities are somewhere in the works. But it is clearly not enough to bring in the mega investments that can transform transportation in India. The only noticeable increase has been in battery-run three-wheelers: more than a million exist but their introduction has been higgledy-piggledy, they don’t meet safety norms and they run on shoddy battery technology.

On the other hand, a clear policy, if formulated, would spell out intent and create confidence. It would help lay the foundations of an organised electric vehicles industry and attract investments. It would provide more jobs, new technologies and, most importantly, cleaner air in cities where automobile emissions account for a large part of air pollution. A policy would also kick off the complex task of creating infrastructure for the use of electric vehicles, embolden banks to lend and help consumers choose an unfamiliar technology.

“I think that setting that goal for 2030 was very important because it made people open up and think what a larger vision could be. But what has happened post that is the ecosystem does not exist. The auto industry has been saying it will take a lot longer. Things are not ready and so there has been a push-back on this front,” says Chetan Maini, creator of the iconic Reva car and currently Co-founder and Vice-Chairman of SunMobility, an electric infrastructure company.

“This whole thing came up because India would produce a lot of renewable energy. In fact, by 2030, India’s target is to produce 300 GW of renewable energy and if all vehicles go electric by 2030 we need less energy than that,” explains Maini. “I think 2030 was misconstrued. What was said was that we have enough energy and so we could go electric. This was translated into a target. But even if 40 percent of that target is achieved by 2030 that would move the country in the right direction.”

Comparisons are often drawn between India and China, but do the two countries compare at all? China has progressed by leaps and bounds in the past five to seven years to become the world’s largest producer of electric vehicles. It is the largest producer of electric two-wheelers and accounts for 99 percent of all electric buses made in the world. In a city like Shenzen all 15,000 buses are electric. 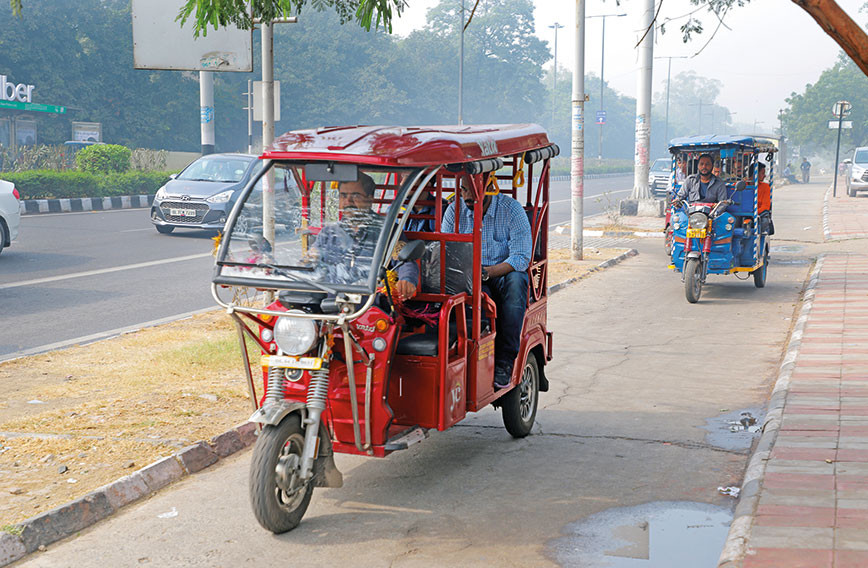 E-rickshaws have flourished on their own but are they good enough?

“Something like 80 percent of two-wheelers in China are electric. We have maybe one per cent. The push has been so fast in China because of policies and a lot of it has been to counter pollution.”

“There needs to be an overall framework. When something is so new and transformational, it needs a push from the government at the beginning. After that the market takes over. Now, in some areas where everything makes business sense from day one, everything will happen automatically. Take the example of e-rickshaws in India. We have 1.5 million e-rickshaws on our roads. It just happened because of demand. But in larger areas such as in the procurement of a bus, which will require tenders and infrastructure, a lot of stakeholders have to come together,” says Maini.

“I think you need a very strong regime to say if it is not 100 percent electric by 2030 where would we like to be by 2025. Let’s put some top-level thought process on these areas and let’s not judge those numbers on the basis of what some western countries are doing. But what the best in the world are doing and how we can be doing it even faster,” says Maini.

Benchmarking India with countries which have done well in relevant segments is important.  What did Norway do in personal  transportation to make 50 percent of its cars electric? What has China done in public transportation, two-wheelers, three-wheelers, taxis and so on?

“Are we going to follow the same policies? They may not be relevant in India and we have to think of what is relevant here. We don’t have the same subsidies and budgets. But in terms of the triggers that created the pulls, we can think of the equivalent here,” says Maini.

India does not have the luxury of making incremental increases. If the automobile industry is growing at 10 percent, electric vehicles have to do better than that. So what should be done? 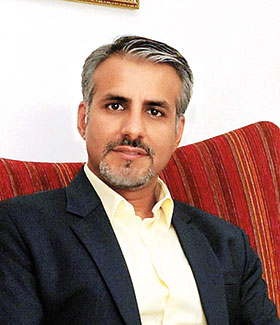 “I would first set a vision and target to say that this is the percentage of vehicles we would like to see electric in three years, five years, seven years and 10 years. It helps line up the industry,” says Maini. “Then we should do what is required to achieve this in terms of vehicles, infrastructure and the supply chain level. And based on these what are the fiscal and non-fiscal policy changes that are required?”

“You want investors in automobiles and infrastructure and so on to see it as a 200 billion dollar opportunity and invest in it. Transformational businesses like these need a lot of investment and money in place. And for people to put that in they should see a direction.”

A comparison can be drawn with the solar power industry. A policy stated the country’s objectives and investment followed. Now there is an International Solar Alliance and India plays a lead role.

For instance, in Delhi, with so much pollution there is no reason why there shouldn’t be a three-year plan for autorickshaws to go electric, which would be a stage cleaner than CNG.

In public transport, the government has a crucial role to play. Bigger targets are needed for making public transport electric. With coordination and a larger sense of purpose much can be achieved. For instance, if every city had a target of making 10 percent of new buses electric next year, followed by 15 percent and then 20 percent, in five years perhaps all new buses purchased could be electric.

Public transport also plays a role in deciding preferences in personal transport. For example, if a commuter took an electric bus and then the Metro and used an electric three-wheeler for the last mile of a journey, he or she would be most likely sold on a technology which is more comfortable, quieter and not harmful to health. When buying a car or a two-wheeler the chances are that such a commuter would readily choose an electric one.

If the government were to set the pace with large numbers, much would follow. Electric mobility would go from being an alternative to a mainstream reality with all the attendant opportunities and support systems.

“Investment goes in the direction in which the country is going to go. Look at going from a two-stroke to a four-stroke to CNG — all of this has been driven by the demand that has been created,” explains Maini.

“Even those in the automobile industry who are well entrenched would be ready to go electric if they were sure of the opportunity. They are being  asked to invest in a Euro 6 vehicle, but why will they put all their money there if they know everything is going to go electric.”