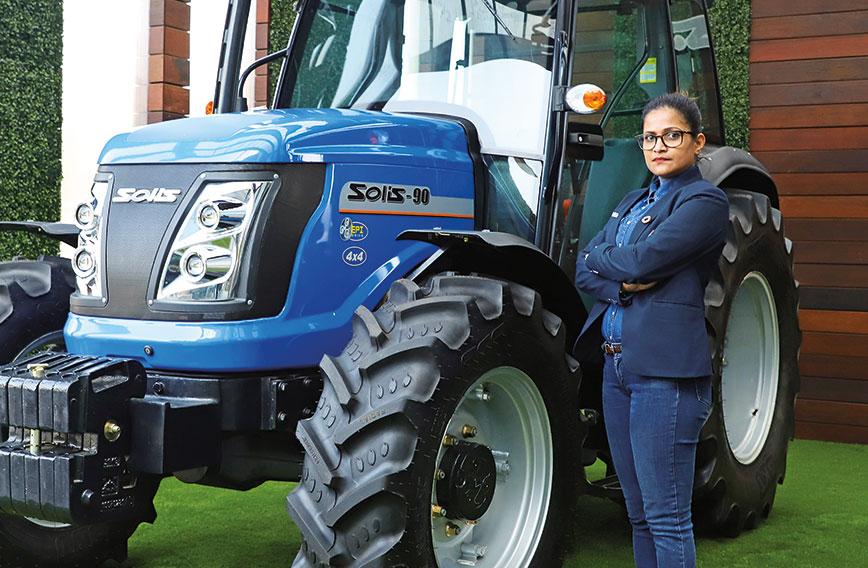 Lopamudra Priyadarshini: ‘My job is to help the farmer’

Stubble trouble: Is a market solution the way out?

Innovative mechanisation and a robust market in crop residues may just be the best ways of discouraging farmers in Haryana and Punjab from burning residues in their fields after a harvest, adding to air pollution in New Delhi and other northern cities in the run-up to winter.

If the residues could be collected and used as fodder or fuel or put back into the fields as mulch, farmers would be incentivised not to burn them as they prepare their fields for sowing the next crop.

Removing the leftover stalks of a crop of rice or wheat after a harvest can cost as much as between Rs 2,500 and Rs 4,500 an acre, which is expensive for farmers who are already coping with financial stress in a troubled rural economy.

But if local businesses were to provide machines for removing the residues and find ways of profiting from putting the residues to alternative uses, perhaps an enduring solution could be in sight.

It is not easy, but it is possible, says Lopamudra Priyadarshini, who heads the corporate social responsibility (CSR) initiatives of Sonalika International Tractors, a trusted manufacturer of tractors with a strong presence in rural India.

It is a Saturday afternoon when we meet, but Lopamudra is in her office at the company’s rambling headquarters in south Delhi. In fact, she is just back from Chandigarh where she met officials of Haryana’s Department of Science and Technology. She also travelled to Rajpura to see how L&T, the engineering major, has turned crop wastes into pellets at a demonstration unit for possible use as fuel in one of its power plants.

The crop residue burning problem is clearly top of the mind for Lopamudra and Sonalika as a company, which wants to contribute to alleviating air pollution in New Delhi and at the same time help farmers adopt progressive practices.

Sonalika has a significant presence and credibility in villages. It also runs a string of skill training centres. It is a catalyst for empowering rural people and helping them make the transition to better technology.  The Haryana government has turned to Sonalika to help find a solution to the complex problem of crop wastes.

“Officials said use your CSR funds to set up a pellet making unit in a village. I said we don’t just want to spend our CSR funds. We want to find a sustainable solution,” says Lopamudra.

“We want to create a model in one village, which can then be adapted and implemented in other villages and problem areas in the whole state,” explains Lopamudra. “It is important to cover a large area because there is no single solution. Handholding of farmers has to happen in numerous ways.”

Currently, burning of crop wastes is banned and invites a fine. The courts have admonished the governments of Haryana and Punjab for failing to be strict with farmers.

But the problem is a complex one and farmers are helpless. They don’t have much time between the rice harvest and the sowing of wheat. The cost of removing the residues by using machines is an additional burden. There is also the question of what to do with the residues since not all of them are in demand as fodder. Turning them into mulch is good for the fields but there are costs and limitations here as well.

Lopamudra believes that government departments, banks, venture capitalists, the voluntary sector and industry should work in synthesis to help farmers deal with a situation that is way beyond their control.

“My job is to help the farmer. So, what I am trying to do is bring in various stakeholders who have the expertise to address the issue in a sustainable way,” says Lopamudra of the role that Sonalika has chosen for itself.

“The farmer knows to work in the field. He cannot be expected to bring in appropriate technology, set up enterprises and develop marketing strategies. Our competency in Sonalika, on the other hand, is in finding managerial solutions,” she says.

Looked at like this, crop residues present a great opportunity to transform the village economy by taking waste and creating value from it and in the process solving an environmental problem.

Crop residues can be turned into pellets for use as fuel, fodder and biogas. They can also be made into compost, biochar and slurry and given back to farmers for fertilising their fields and improving soil productivity. With mechanical support, the residues can be cut and retained in the fields as mulch.

Each of these options requires a sustainable model, which is possible if businesses can be built around them. The goal should be to handle the wastes at minimal cost to the farmer. Innumerable small enterprises could rent out machines, make bales of the wastes and warehouse them, add value by shaping them into pellets and generate biogas from the straw. In doing so they would take the load off the farmer and simultaneously provide local employment to young people who may no longer see a future for themselves on the fields.

“There is really no single solution. Solutions evolve depending on the need. Local entrepreneurs are best suited to find what works,” says Lopamudra.

Once facilities are created and opportunities emerge, progressive farmers will begin to see the benefits of not burning their crop wastes and instead deriving value from them.

In a broad way, there are three machines which can be used to deal with the residual wastes on a field as a farmer goes from harvesting to planting the next crop.

These are the Bailer, the Mulcher and the Happy Seeder. They cost a few lakhs of rupees each and no single farmer can be expected to block that amount of money. So, as mechanical solutions go, these machines need to be shared to be affordable.

The Bailer cuts the wastes and makes bales which can then be sold, mostly as fodder. The Mulcher cuts and spreads the wastes on the fields so that they serve as mulch and nourish the soil. The Happy Seeder plants the seeds of the next crop in between the stubble left behind from the harvest and over time the stubble itself becomes mulch.

The problem is that no machine has universal application. The Happy Seeder has received the most attention, but it has its limitations depending on the height of the stalks. Also, it won’t work if the next crop is potato and not wheat.

Farmers burn crop residue to prepare their fields for the planting of the next crop, mostly in the cycle of rice followed by wheat.

The farmers are mostly pressured for time between crops. Removing the residue is a cost involving the hiring of labour or renting of machines.

Burning the residue, for most farmers and particularly the smaller ones, is the cheap and easy way out. It has some benefits too like adding carbon to the top soil and killing off pests and weeds. On the other hand, there is the downside of micronutrients being destroyed by the burning. But, this is what the farmer can afford.

“Farmers need access to appropriate machinery and training to implement change to discourage burning,” says M.L. Jat, of the International Maize and Wheat Improvement Centre (CIMMYT), in the organisation’s official release. “Using crop residue in a sustainable and eco-friendly manner could benefit all stakeholders.”

But Jat points out that only 15 percent of rice residues can be used as fodder, fuel and industrial raw materials.

“Residues are of great economic value as livestock feed, fuel and industrial raw materials, but of the total rice residues produced in northwestern India, only around 15 percent can potentially be used for these purposes and the rest must be managed with in-situ management technologies,” says Jat.

CIMMYT has been working extensively with farmers and promoting the Happy Seeder as the answer to stubble burning. Jat’s research has been conducted in collaboration with the CGIAR research programmes on maize, wheat and food security in the face of climate change.

If this is so, a combination of entrepreneurial activities and improved in-situ agrarian practices are needed to make farming more sustainable and put an end to the burning of wastes.

A huge responsibility rests with the government to create awareness among farmers. Financial incentives are also needed. It is also important to realise that multiple solutions and flexibility are required.

“We don’t have a readymade solution. Solutions will evolve depending on the need. This means working closely with farmers. Over time it will be possible to have dependable solutions which farmers can implement depending on what they plan to do. It could be mulching, baling or the use of the Happy Seeder,” says Lopamudra.

At the pellet-making unit in Rajpura, crop wastes have been collected from farms spread over some 300 acres and turned into pellets. The farmers have not had to do anything. It has all been done for them. As an experiment, such an approach may be fine. But, the true test of a workable system will be when farmers and local entrepreneurs join the dots.

There is also a need to quickly transfer technology and share learning. For instance, currently only the National Thermal Power Corporation (NTPC) is said to be successful in using pellets made from crop wastes as fuel.

Passing this experience on to other power producers will spur demand for the wastes and provide the opportunities that would attract small entrepreneurs who would in turn reach out to farmers.

The availability of machines will depend on financial support to entrepreneurs, who will also have to acquire the expertise for running and maintaining them. Or perhaps the servicing requirements could be an opportunity worth pursuing separately.

The possibilities are endless and there are indications that people already sense them. Lopamudra says when she was in Rajpura to see L&T’s pellet making, she was approached by representatives of a micro local unit who said they were fabricating machines to make pellets.

Lopamudra also refers to an outfit in Bathinda which has built a business model around using crop wastes to generate biogas, which it sells. The farmers pay the outfit for removing stubble and get compost and slurry in return.

Learning from such initiatives and promoting them for replication will be a challenge for which multiple partnerships will be needed. As with most environmental issues involving public health, the clock ticks loudly. Estimates have it that in certain months about 25 percent of Delhi’s air pollution comes from the burning of crop wastes in Haryana and Punjab. If another air emergency is to be avoided, time for effective action is running out.