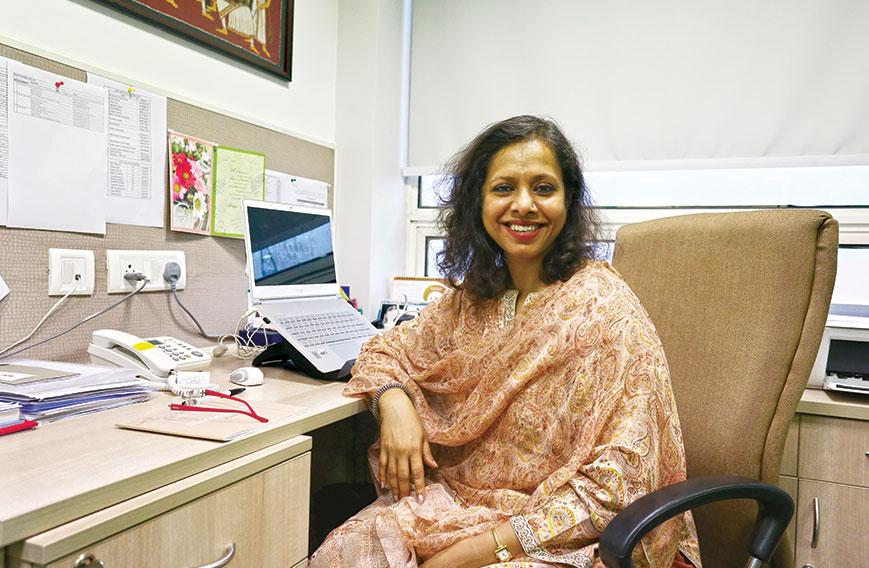 Ratna Vishwanathan: ‘Over the last month collection has slowly picked up and we are at around 70 to 80 percent’

‘MFIs have coped but going cashless is tough'

The microfinance business works on a model of collection and disbursement. Traditionally it has been dependent on cash because loans are small and so are repayments. When demonitisation was announced, this cycle was disrupted. At stake were the finances of 40 million women. Their problems were far removed from the focus on queues at banks in cities.

But in three weeks collections have reached 70 percent or so. Women have stood in line and withdrawn their small sums to keep the wheels of microfinance turning.  There are, of course, other issues like loans put in accounts that can’t be readily accessed and repayments that have been delayed. The thrust to go cashless in microfinance has many hurdles but it is also an opportunity. We spoke to Ratna Vishwanathan, the CEO of Microfinance Institutions Network (MFIN), a Self-Regulatory Organisation (SRO), on how the sector has been coping.

What has been the effect of demonitisation on the microfinance industry?

We cover around 40 million women across 32 states and our loan book size is about Rs 70,000 crores. The agricultural sector, cooperatives and the corporate sector all have a constituency. Big people speak for them. But the low-income, non-agricultural unorganised sector has no constituency. It is practically invisible.

We initially requested the government to allow us to collect old notes from our customers since most of them are in rural or peri-urban areas and their access to new money would be limited. We would, of course, account for every note and put it in the banks. But last minute our request was turned down.

You are saying that 40 million women had started accessing the new notes?

Yes. They were standing in line, in queues.  What is commendable is that all these women depend on daily earnings and their income is sporadic. They run vegetable stalls, kirana stores and so on. Almost three weeks after demonitisation we have reached collection levels of around 70 percent. Not bad for an industry that wasn’t allowed to collect old notes and lacked access.

Where did they exchange their old notes?

They went to post offices. They went to banks. They must have gone at least four or five times. Bank branches had been made agnostic and that was helpful. We haven’t done a study on how demonitisation has impacted the livelihoods of our borrowers. But it must have affected them. It also reflects their desire to repay.

Disbursement has become an issue. Banks don’t have the cash to give out or there is this restriction that you can withdraw only Rs 50,000 from a current account. That is meaningless for us.

Our model is a collection and disbursement one. It is not an attempt to work around the banking system. It is very imperative for disbursement to happen because MFIs don’t take deposits. They only collect and disburse. It’s an old model but a fragile one primarily because MFIs borrow from banks at commercial interest rates ranging from 12 to 18 percent. So they have to repay the banks. It’s all MUDRA (Micro Units Development & Refinance Agency) money. They pay the women who take small tab sizes. Liquidity has to be constant. If one part stops, the entire cycle gets disrupted. So MFIs have started disbursing smaller amounts of cash just to maintain liquidity in the system.

It’s important for glitzy financial papers to understand this model. This is the only place where women, who are marginalised and don’t have a voice, can get  unsecured funds through a regulated and formal framework. In the last four to five years we have pulled nearly 40 million women away from the informal lender. It’s a doorstep delivery model, which is why you are not standing at a bank counter. If you disrupt this model the women will go back to the informal lender.

What was the immediate reaction to demonitisation?

The immediate reaction was panic. Nobody knew the outcome. You were told that from midnight 8 November Rs 500 and  Rs 1,000 notes will not be legal tender. So there was a degree of confusion. On the first two days people took time to understand and the banks, too, were closed. Most MFIs had some money they had collected. The government allowed them to deposit it so the first two weeks were all right.  As an SRO (Self-Regulatory Organisation) we issued an advisory to our members not to collect old notes. So collection of old notes stopped. Disbursements went down quite badly. But they are coming back very slowly.

It’s not particularly on the downside?

No its not. Our other big issue is a circular issued by the RBI. The normal definition of an NPA (Non-Performing Asset) is an asset that does not perform over 90 days. The circular gave an extra dispensation of 60 days to anything originating between the period from 1 December to 31 December for NPAs. This meant that the NPA would have 150 days to perform instead of 90 days.

Unfortunately, the circular was worded such that everybody, including the media, took it to mean that your loan has been deferred by two months so you can pay after two months. And this misinformation went viral.

Of course MFIN put out advertorials, made press statements, issued press releases, spoke on TV, saying this is being misread. The circular has only to do with asset classification for balancing balance sheets of banks. It has nothing to do with actual repayment. You need to repay your loan on due date or the interest will start accumulating.

It didn’t really help a lot. In the states of UP, MP, Maharashtra, Uttarakhand and a bit in Karnataka misinformation created problems for us. Small political functionaries, and its party agnostic, began encouraging women to default. That is why I have been meeting senior functionaries in the political and bureaucratic hierarchy. In Karnataka it worked because the chief secretary’s office issued letters to all district collectors that these are MUDRA loans and have to be paid back else they will affect the NPA of banks. On the whole, the bureaucracy and the government have been receptive.

What is the size of the microfinance sector in India?

If you take NBFCs 10 percent of their portfolio can be lent to microfinance. Then there are Section 8 companies and banks that do microfinance either through business correspondents or directly. The actual share of NBFCs/MFIs is only 34 percent. For SHGs it is 38 percent, though here there is an overlap factor between SHGs and MFIs so its really not all 38 percent. Banks account for 22 percent. With the small finance banks going to move out in the next three or four months, 50 percent of today’s sector will again go into the banking sector. But if you take the overall pie it’s almost close to Rs 2 lakh crores gross loan portfolio size.

So there was no strategy for Rs 2 lakh crores in circulation in the economy?

I wouldn’t say that. The banks doing microfinance were allowed to collect old currency.  It was the NBFCs, the Section 8 companies and the NBFC/MFIs that had to steer their way through.

Our biggest request is for disbursement. Once that is cleared then the industry will settle down much more.  I can transfer any amount to my borrowers online. But my borrower faces severe constraints in accessing money from the system. There are limitations on access. From an ATM she can get Rs 2,000. If she goes to the bank she is entitled to Rs 24,000 from a cheque.

There is a need to understand that Jan Dhan accounts don’t have cheque books because they are no-frill, zero-balance accounts. The RuPay cardholder is given a passbook but not a cheque book. So borrowers only have the ATM route. Of course some people who may have proper bank accounts could use cheque books, but banks are rationing cash because of the shortage so you may get only Rs 10,000.

The whole microfinance sector works only in cash?

See it’s good to try and move microfinance to a cashless system. But there needs to be practical understanding of the extent and degree to which this is possible.  One limitation is the move to digitisation. Only 27 percent of the population has smart phones. Sixty-seven to 68 percent have feature phones. Some wallets can be accessed on feature phones, but there has to be an understanding around cyber security. It’s not just about having a phone. For a seamless cashless system you need electricity, net connectivity.

Can the microfinance industry become cashless?

Disbursal can be cashless to a large extent. Collection becomes a challenge. You need access to banks and POS machines. You need to be linked to a mobile wallet enabler.

Some MFIs have been disbursing 60 percent or 40 percent of cash through the online route. Smaller MFIs do 100 percent online disbursement. Today, there is another impact. The MFI can disburse cash into your account but you can’t withdraw the money. However, your interest begins from the day of disbursement. We have to be fair to borrowers. People are now asking for reversal of the transaction because unnecessarily you end up charging interest to the customer.  These are issues we are grappling with.

There is another fallout. The entire data of our borrowers is uploaded on the credit information bureau. NBFC/MFI borrowers have rock solid credit histories. The data is updated to credit bureaus on a weekly basis as mandated by the RBI. As an SRO, MFIN will penalise you if you don’t do so.

How has the new financial architecture worked? Did business correspondents (BCs) help borrowers tide over this crisis?

What is the status of financial literacy programmes?

So far it has been a bit piecemeal. But we will be introducing a literacy app soon.  It has been designed with icons and not numbers or letters. It has comic strips that explain what is a loan, what are interest rates and a ready reckoner. We will need to bring in the digital aspect. In most homes it is the man who has the smartphone. Every woman should have at least a feature phone so that she can access her account. It’s better to work with the system.  In the long run everybody will benefit.