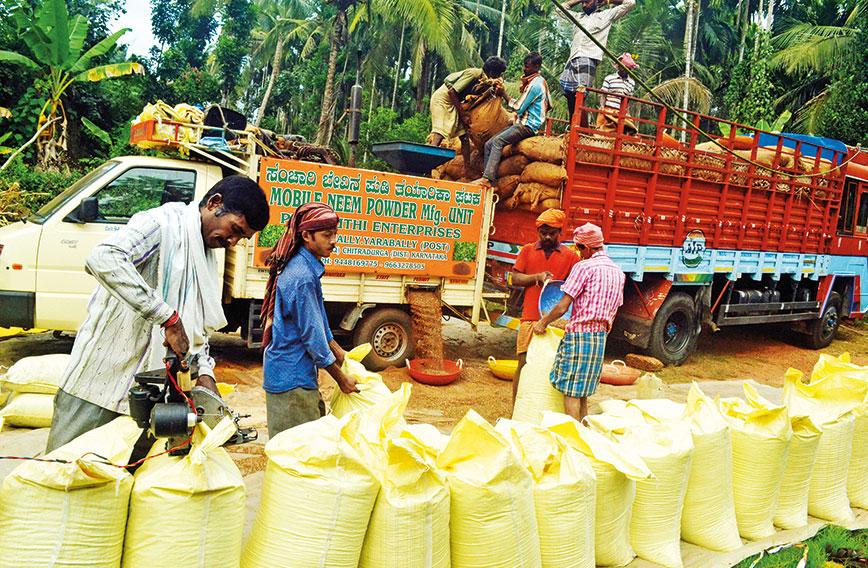 A neem factory on wheels! Fresh pesticide for farmers

Three months ago, Nagaraju G.H. started an unusual venture, probably the first of its kind in India. He set up a mobile neem crushing factory mounted on two trucks, and he now travels to the doorsteps of farmers to supply neem seed powder to them.

Nagaraju provides a much needed service. There is high demand for neem oil and neem cake due to the rising popularity of organic farming. Both products are used as natural pest repellents. Along with spiralling demand over the past two decades, prices have risen sharply. The end result is considerable adulteration of neem products. For farmers, getting pure neem products has become very difficult.

Going house to house, Nagaraju shows farmers a video on how his neem powder is made so that they are completely reassured.

“I sold about 1,000 tonnes of neem seed powder last year. Next season, I hope to double my sales,” he says. He plans to visit coffee estates in Chikmagalur and Hassan next month.

To get Nagaraju to come with his unit, the farmer has to place a minimum order of 10 tonnes. He then arrives on a pre-fixed date with two trucks. The first truck, a small one, is loaded with a crushing machine. The second, larger, ‘support’ truck has 10 tonnes of raw neem seeds. The unit has a staff of five consisting of a driver, two operators, one manager and two labourers.

The 45 hp pulveriser on the truck is a high-speed one. It crushes three tonnes of neem seeds in an hour. The ‘support’ truck is parked near the crushing unit. Two labourers continuously feed the pulveriser from bags of seeds on the support truck. The farmer has to provide five additional labourers to carry out the operation fast.

The seeds are crushed into coarse powder. These are filled into gunny bags, weighed and stitched. Each bag contains 50 kg of neem seed powder and is sold for Rs 1,100 and 1 kg of neem powder costs Rs 22.

In markets here neem cake, used both as manure and as a pest repellent, is available in two forms — as pellets and as a powder. “Neem pellets are produced in big expellers. While crushing the seeds, the oil comes out from one side and the pellets from the other. So neem pellets will smell of neem but not the oil which has insect repellent capacity. Several farmers, unaware of this, buy neem pellets but don’t get the desired result,” explains Nagaraju.

Nagaraju isn’t new to the neem seed business. He has a permanent neem crushing unit in Hiriyur taluk of Chitradurga district, functioning for decades.

Why did he decide to set up a mobile unit? Fifteen years ago, he says, when he was telling farmers about the purity of his neem products, a planter in Chikmagalur quipped, “What’s so special about you? All the manure business guys adulterate. Why should I believe that you are any different?”

Nagaraju felt insulted. He decided to rig together a mobile unit that could be taken to farmers to show them how he produces neem products. But implementing his idea proved tough. Finally, he brainstormed with a friend and came up with the unit.

Initially, the pulveriser used to be a separate stationary unit that was dismantled and transported. But it wouldn’t start smoothly. Most pulverisers, widely available, are small and produce little. Nagaraju required a pulveriser with high output. So he developed an inexpensive customised one and bought two second-hand 10-tonner trucks. Nagaraju’s total capital for his venture, which he started last November, worked out to Rs 25 lakh.

India has a copious number of neem trees in the southern and northern states. Seeds fall from the trees from June to September. Collection of neem seeds provides an income to thousands of poor labourer families.

Generally, these labourers sweep the ground and collect the seeds. So raw seeds have neem leaves, bits of twigs and tiny pebbles mixed in them. Small shops in the neem belt in Karnataka buy these seeds from labourers for about Rs 8 to Rs 10 per kg or even less. The pooled seeds are then bought by big traders who stock them to sell during the off-season when they get a higher price.

Nagaraju gets neem seeds from Kushtagi, the biggest market for neem seeds in Karnataka and Koppal. Both his raw material area and his customers are a 12-hour journey from his hometown in Hiriyur taluk.

During the peak season, every day, 50 to 100 lorries loaded with seeds arrive at Kushtagi. “There are big traders who stock 10,000 to 20,000 tonnes of these seeds from Kushtagi for a few months and then sell later,” he says. But during the off-season, he has to buy neem seeds from distant states like Andhra Pradesh, Odisha and Gujarat.

Nagaraju first sold neem products from his mobile factory during a day-long agriculture extension programme on the premises of a farmer, Vishwanath Rao, in Sullia. A few farmers bought 10 tonnes of neem seed powder from him.

Noting this, K.V. Sharma, a farmer from Ishwaramangala near Sullia, asked Nagaraju to visit his farm. He introduced Nagaraju to fellow farmers. In two or three days, Nagaraju sold 20 tonnes of neem powder. Sharma endorses the quality of Nagaraju’s neem powder. “Recently, I procured branded neem seed powder from a government research station. But Nagaraju’s product is far superior,” he says.

Nagaraju has so far sold 60 tonnes of neem powder from his mobile factory in three or four places and received positive feedback. “A few customers want to see our raw seeds. We show it to them. But the entire process is carried out right in front of their eyes, so they are completely satisfied,” he says.

He says he can get even better quality seeds with negligible stones and twigs from Odisha and Gujarat during certain times of the year but the seeds are costlier and he would need to hike his prices to make a profit.

Since the peak period, when coffee estates buy neem powder and pellets, is fast approaching, Nagaraju plans an intensive promotion drive to book orders. “I have 1,000 regular customers who buy anything from half a tonne to 20 tonnes. Even if I get an order of one tonne from each of my regular customers, I can easily achieve my regular sales target of 1,000 tonnes per year,” he explains.

He is now thinking of fixing the pulveriser on a bigger truck with a few alterations. If successful, he will need just one truck for his mobile neem factory.