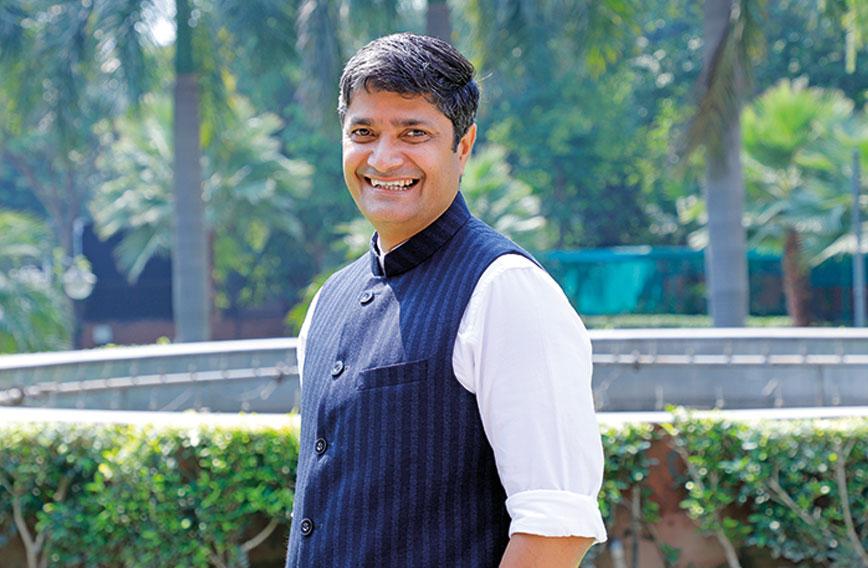 Chandra Bhushan: 'We will be very engaged in the climate change debate'

It is not common to find a hard-nosed environmentalist with a fan following in the boardrooms of corporations. Chandra Bhushan is one such.

As the leader of the Green Rating Project at the Centre for Science and Environment (CSE), Bhushan held an unwavering mirror to the standards of industries such as paper, cement, automobiles and mining.

Company after company was persuaded to improve technologies and processes. A space was created for engagement with senior management, which learnt to abandon stealth for a willingness to talk openly about where their factories were falling short.

Bhushan has now set up iFOREST or the International Forum for Environment Sustainability and Technology. An engineer by training, he believes modern technologies and innovation can bring quantum improvements in the environment. Dr R.A. Mashelkar heads the iFOREST board.

Bhushan was with CSE for 22 years. He was handpicked by the late Anil Agarwal and was a disciple who learnt from him how to be combative and collaborative at the same time. After Agarwal died, Bhushan worked closely with Sunita Narain on several impactful campaigns. He led many of CSE’s research programmes.

We spoke to Bhushan on his plans for iFOREST and how he sees the path ahead through the maze of India’s environmental problems.

You are leaving CSE after 22 years. After having worked closely on so many frontline issues what will you be doing now?

I had a wonderful journey at CSE. As an institution we achieved many milestones especially at a time when environmentalism in India was at a very nascent stage and people didn’t have information. That’s when Anil (Agarwal) came in with the State of India’s Environment report, Down to Earth began as an environmental magazine and research teams were set up at CSE. Some basic environment laws and regulations were put in place. CSE was at the right place at the right time, poised to become one of the leaders of the environment movement in India.

Today the language of environment has been mainstreamed. Everyone talks of environmentalism and every government has a paper on the environment. The challenge is how do you scale up implementation.

I have been thinking about this for quite some time. The era of top-down policy is over. The question is, how do you convert policy into a scaled-up model for implementation?

That is the real challenge the country faces today and that is what motivated me to embark on my next journey where I could look at policy design and, more importantly, at innovation. I think we are in an era where technology is available for large-scale innovation and scaled-up work in the field of environment.

So, policy design, innovation and scaled-up implementation — these are the three core pillars we will be building on.

You have worked closely and fruitfully with industry. Based on this kind of experience what are the areas you would focus on?

Absolutely. I was fortunate perhaps to lead the only programme in the environmental movement in India which engaged fruitfully with industry on the same platform, at the same level. When I was releasing the Green Rating report on the cement industry I was speaking to industry leaders and Anupam Mishraji was sitting in the front. Post the report’s release he came up to me, took my hand and said, ‘This is Gandhism at its best’.

At that time I didn’t understand what he meant. Later, I realised he was essentially saying that speaking truth to power is what Gandhi did. The Green Rating project did exactly that.

We spoke truth to the most powerful industrialists in India. Initially, they were resistant. But once they understood the unbiased nature of the rating and the foundation of goodwill it had for industry and the environment, they all came out to support us — from Gautam Thapar to Harsh Pati Singhania to Yogi Deveshwar…

In fact, Deveshwar was a big fan of the Green Rating project. Recently, after his passing away, I met some of his colleagues from ITC. They narrated a story which really warmed my heart.

In our first paper industry rating we had given the worst rating to ITC. Deveshwar called a board meeting in which he said, Who the hell is this Chandra Bhushan who says we are the worst paper plant in India. The next time he rates us, make sure we are the best. And that is exactly what happened. Four years later, when I rated ITC again, the company had the best paper plant in India.

This tells me that without engagement with industry and businesses you cannot improve environment in India. Environment cannot be solved by government alone. In fact, I always say environment is too important to be left to the government. We need industry engagement, financial sector engagement and public participation. Only then will we be able to resolve environmental issues.

One of the pillars of our work will be green economics. How do we green, not only industry, but the financial sector so that there is market support for the environmentalism that we want.

To take it to spaces where strife happens?

I would say to take it to uncomfortable spaces for environmentalists like me.

See, one of the problems in the environment movement is that we do not know how to engage with businesses. It’s very easy for other environmentalists to accuse you of being on the side of business even if you are engaging at the same level, even if there is no financial transaction. So it’s a very uncomfortable space to be in.

But the Green Rating project taught me that the way to navigate that uncomfortable space is to be open and transparent. So for the Green Rating project, every letter I wrote to industry or received from industry, every report that we published, I would get put up on the website. Then there was no scope for any kind of negative publicity to happen.

When you talk of NGOs and activists being adversarial for a long time, actually industry, even now to some extent, is adversarial in its own way. Despite that, in 22 years you have seen a change.

It is. People are discussing environment in their boardrooms which is a tremendous change. That discussion has to also become more real and more implementable. I am quite hopeful in an era of climate change, industry is realising that their businesses are at stake. One episode of extreme weather can wipe out a plant. Think about what happened in Pune, Patna and other cities. There were plants that were wiped out. So I think industry is realising that climate change and other environment issues are a threat to business.

Will climate change be one of the key areas you will be taking up?

Yes. We will be very engaged in the climate change movement because the solutions to climate change are going to be extremely challenging. We have to change the energy system.

But that’s a big issue.

Actually, changing the energy system is the easy part. We have the technology. We have wind and solar and we already live in a battery world. I mean, can you live without your mobile and laptop? So we are living in a battery world except that it has to be enlarged. The question is: how do you produce steel and cement? How do you produce food? How do you transform the transportation sector and the aviation sector? These are the big challenges we face and these are also core industries.

So what will you be working on, initially?

We have decided to work on four pillars in an integrated way. The first is livable and sustainable cities. Globally, more people live in cities already. I’m quite sure that when the 2020 census results come in 2022, you will find 40 to 50 percent of India’s population living in cities. So cities are going to define the sustainability of the nation. Not rural areas.

The second pillar, which I am very excited about, is an integrated programme on agriculture, land, forests and water. See, most environmental problems focus only on land management. Everything is about land. We will discuss climate change adaptation and other issues.

The third is energy and climate change. We will be discussing transition. It is an irony that climate change will lead to huge transfer of wealth. The poorest part of India is where the coal is and the richest part of India is where renewable energy is located. If you close down coal mines, what happens to the Jharkhands and Jharias? They are polluted, it is true, but there is economic activity happening there. How do you make the transition from coal to renewables without disrupting livelihoods in poor regions?

What do we do about coal?

I think we have 30 years to close down coal. Whenever someone says close down coal I give them a perspective. I tell them to think about 30 years ago. We had floppy discs, then. Today, we have more computing power than Apollo 11 in our hands. Thirty years is a long time for the world to change. There is also pressure for change to happen.

My sense is you have to build an alternative economy and industries in those areas. Coal will not end because we have renewable technology. Coal will end if there is political support and grassroots support to say, yes, we are now ready to transition from coal.

The fourth area is green economics where we will work very closely with the financial sector and industry.

In terms of coal, and this is so important to the nation, what do we do in the interim? Obviously, it makes sense to use our coal but at the same time you live in a warming world.

It isn’t just about India closing coal. It’s about the world moving away from coal. What should be the principle on which this should happen? And the principle I have arrived at is based on depreciation. If a plant has depreciated — covered its capital, interest, benefits… then it should be closed down.

If you draw a map of the world and place all the coal plants according to depreciation, you will find the oldest plants, whose average age is 40 years, are in the US. So it is immediately possible to start closing down US plants. There is Europe which also has old plants. If we use this principle then India should perhaps start closing its plants from 2030 and complete this process by 2050.

But during this interim period what should we do?

I think we should promote clean coal, high-efficiency utilisation of coal, reduce our T&D losses — we lose 30 percent of our electricity — and improve energy efficiency so for every unit of coal we get more economic and social output. This is what the roadmap should be and we have 30 years for this transition to take place.

Who do you think will fund iFOREST?

It will remain a publicly funded organisation. I do not see the colour of money.  I see its quality. So even if it is less money it should allow you to do good work. We need money with patience. Right now the money that comes to the NGO sector doesn’t have patience. The funders want a report the very next month. In this field, if you want to do good work you need money with quality and patience. My board is very keen that we raise as much Indian money as possible.