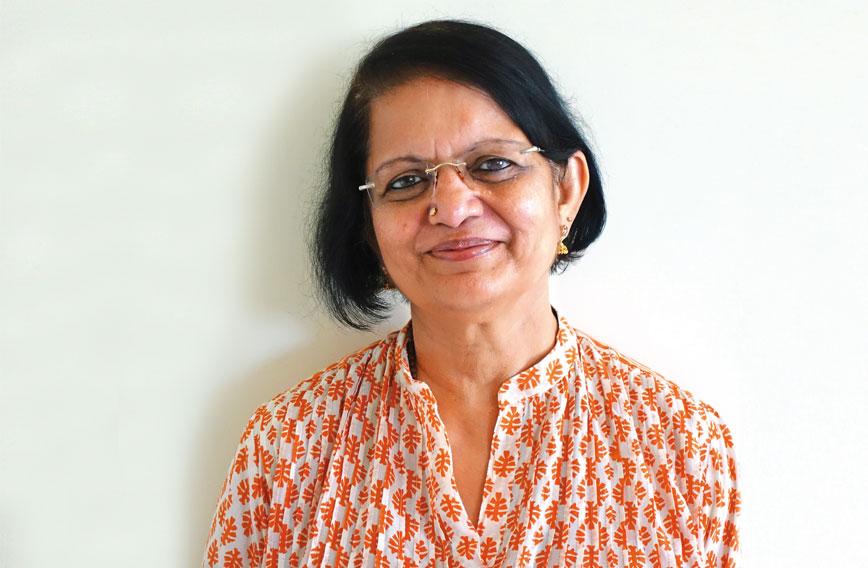 Meera Shenoy: 'Unless the business opportunity is clear to an organisation, it will never be an equal opportunity employer.'

Everyone is worried about the lack of jobs in the Indian economy. Where will a growing number of young people find employment? How will they be skilled?

But even as experts look for answers, 10 disabled young people, trained and groomed, are being placed in companies every day through an effort that recently won the 2019 MIT Innovative Inclusion Challenge award for Asia.

In the past seven years, Youth4Jobs, founded by former journalist Meera Shenoy, has put 18,500 young people in jobs where they have done well and brought value to the companies.

Better still, these young people all come from rural India where in their villages they were written off as being incapable of productive work. The jobs have not just transformed their lives but led to a rapid rise in family incomes. In many cases, social equations have been rewritten. At a personal level, parents have been able to breathe easy.

So what do Shenoy, a spirited 57, and her team get right with finding employment for the disabled which the rest of the country can’t seem to manage to do for perfectly healthy young people who have an education and much more going for them?

Youth4Jobs identifies disabled young people in villages, provides them intense training for two months at residential centres and persuades companies to take them in. Shenoy has built this edifice brick by brick, going from one success to the next.

It is not just employers, but families, too, that need to be persuaded about disabled young people being capable of learning and holding their own. A lot of the time low morale and lack of self-confidence come in the way. A disabled young person in a village languishes at the bottom rung of everything.

Shenoy has been in mission mode since the time she founded Youth4Jobs. “I am passionate about what I am doing and, as the leader, that is the example I want to set for the rest of my team. Together we care deeply for the young people we take in. And the transformation we see in two months is like a miracle before our eyes,” she says

After her life as a business journalist, she had helped the Andhra Pradesh government shape and implement a skilling programme for the young and then provided consultancy to the World Bank.

But with Youth4Jobs she wanted to do something completely different. Finding employment for disabled young people in rural areas was the kind of challenge Shenoy felt was worth taking up.

“People opt for the urban areas because they want the low-hanging fruit. But I felt the bigger problem was in rural India,” Shenoy explains. “The majority of disabled people are in the villages. Also, it takes a lot to get people in rural areas to admit to disabilities. They have little hope of finding employment or their young people being able to live normal lives.”

There are, as per census figures, 70 million disabled people in the country. The number could actually be much higher. Of them about 0.5 percent are employed in some way or the other.  Young people in villages are the least employable and cut off from opportunities. 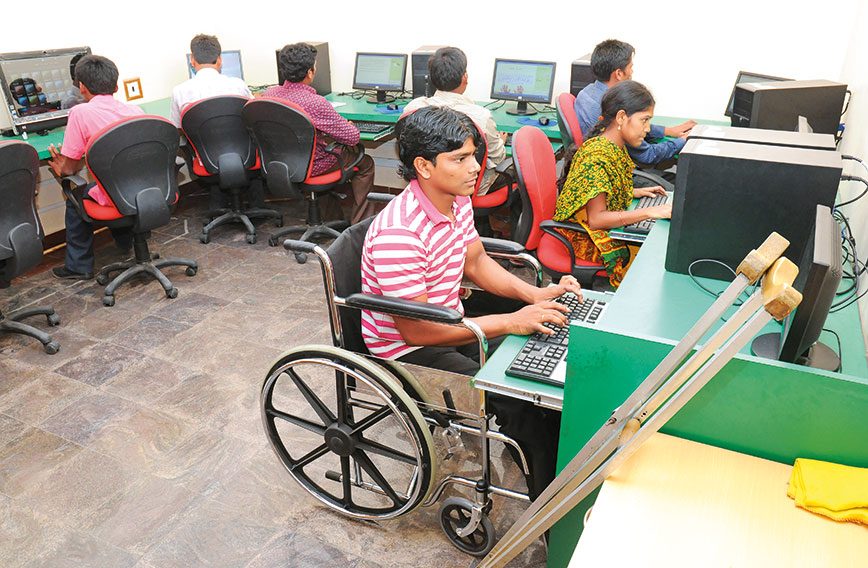 Computer skills are part of training

Shenoy set out to show that they could be made employable. She also wanted companies to see the opportunity in hiring disabled people in formal jobs. The company needed to see true value in them as employees and not just hire them out of a sense of charity.

Every young man or woman who got a job became an ambassador for the idea. Similarly, beginning with Google, every company where they successfully worked became an example for others to emulate.

“Unless the business opportunity is clear to an organisation, it will never be an equal opportunity employer,” says Shenoy.

“The biggest stumbling block is mindset. To create a ripple effect for a change in mindset takes time. The process is slow. But the beautiful thing is the process has begun,” she says.

“We call ourselves an organisation which is either helping companies to begin the journey in hiring people with disabilities or strengthening the existing journey,” Shenoy says about Youth4Jobs’ role.

“Many companies have hired one or two people with disabilities without the processes being in place because they were mandated to. There are companies that have not begun at all, some are sitting on the fence, some have made a beginning and there are those that have taken it up seriously because they see the business advantage.”

Traditionally, the IT sector hired people with disabilities. But these have been the bright ones with an education and knowledge of English.  But their number was small.

The real hiring and training needed to happen in the rural areas where more than 60 percent of India lives.

Now hiring takes place across sectors — in retail, hotels, coffee shops and small-scale units. Youth4Jobs has a large footprint. It began in the south, but to live up to its goals of reaching the poor and larger numbers it has had to go to states such as Bihar and Odisha. It is present in the northern states and in the northeast as well. 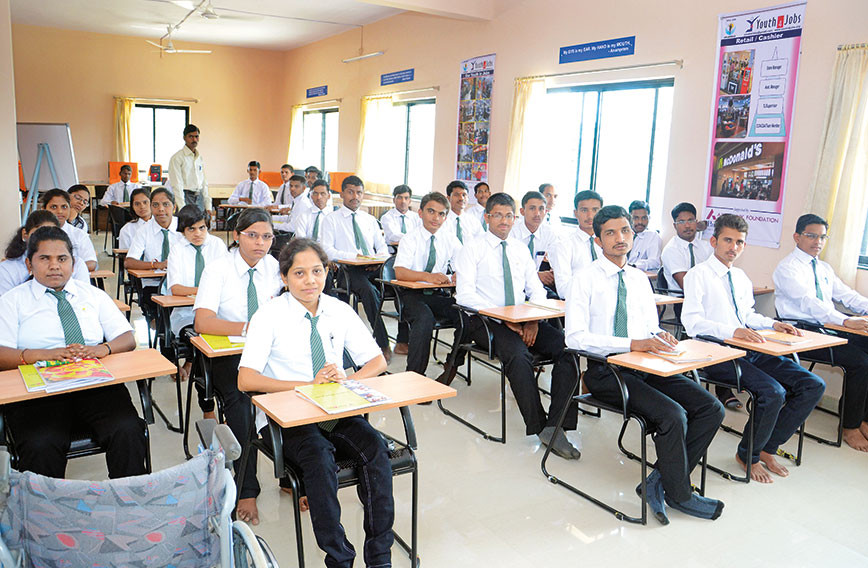 A class in session

After seven years, there is much to show by way of results. Shenoy remembers in the early days people in villages would not believe that youth with disabilities could be trained and employed. It was also not easy to get families to disclose disabilities.

“Parents thought we were fly-by-night operators. Some would come to our training centres to check us out. At first we had no track record. But every young person who got a job was proof of what we were achieving. A disabled young man with a job returning home in his uniform experiences a change in status. Often the landlord’s son doesn’t have a job, but a disabled boy from a poorer home does,” says Shenoy.

Of the 18,500 trained and employed through Youth4Jobs, 30 percent are girls. The number keeps falling because of states like Rajasthan where girls aren’t sent out.

Between 60 and 65 percent of the people trained get jobs in the organised sector. About 15 percent, having learned computers and English, want to go in for higher education. And another 15 percent or so insist on trying for government jobs.

After training there are young people who want to relocate to bigger cities. There are also those who are either less aspirational or have severe disabilities and prefer to stay nearer home. For them opportunities are found in local markets in small-scale sector units.

How difficult is it to train the young people who come to Youth4Jobs? Shenoy says more than 30 percent have been from lower castes. Their social status plus the disability means that they are invariably lacking in self-confidence.

The training over two months involves basic literacy, life skills, use of computers, financial literacy and learning how to communicate. Giving them self-confidence is crucial to preparing them for employment. Sometimes the training is customised for the job opportunities that are available.

“We look at what the jobs in the market are and give them orientation for what is available. Sometimes they receive on-the-job training before they are absorbed,” says Shenoy.

Youth4Jobs doesn’t turn anyone away. But they have been mostly working with young people who have locomotive problems, are speech and hearing impaired and have low vision. There are also those with cerebral palsy and learning disabilities.

The impact of a disabled person finding employment is difficult to assess. Much of it has to do with family. Every parent worries what will happen to a child with disabilities. Employment puts those fears to rest. Invariably, disabled young people tend to be caring about their families, particularly their parents. They also look after their normal younger siblings by paying for their education.

The outcomes are complex as is the process of taking disabled people out of poverty and making them productive and aspirational individuals.