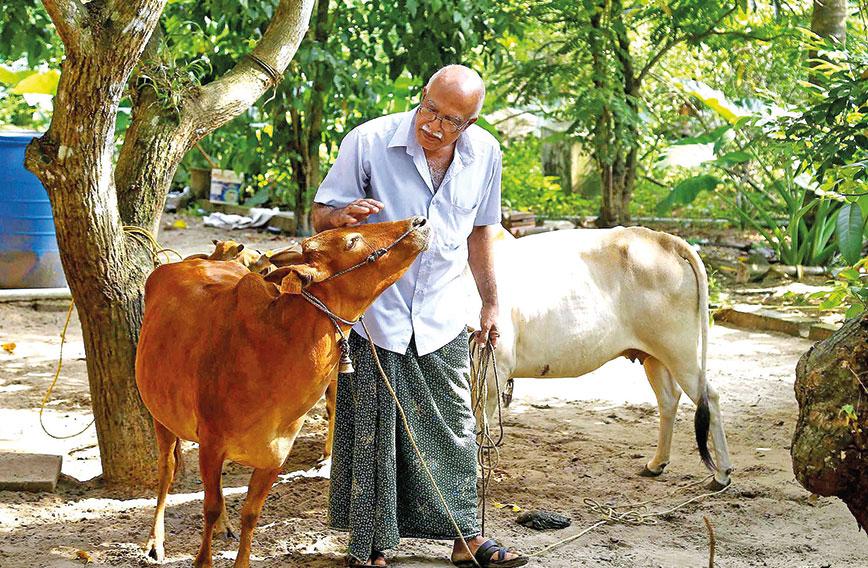 Kerala farmers give Desi cows get a brand name

How do you save desi or indigenous cows from extinction? Just make it profitable to rear them. It is really that simple.

For years desi cows have been losing out to crossbred varieties because they produce less milk. Farmers simply do not see them as a worthwhile investment. As a result, the number of these cows has been dwindling.

Well-intentioned efforts since the 1980s to conserve the desi cow invariably hit a roadblock when it came to the question of profitability. A farmer needed to get a decent income from his cow and with the desi breed that wasn’t happening.

Now, 50 farmers in five districts of Kerala have come together to set up the Vechur Parirakshana Samithi, which is a non-profit but with a hardnosed business strategy. They have chosen Vechur as the brand name of their products. Vechur is a desi breed.

The way they see it, there is clear opportunity in promoting desi cow products for their health benefits. The fact that there are fewer desi cows only makes them exclusive and desirable. On offer under the Vechur label are milk, ghee, curd and organic agriculture inputs like jeevamrutham and panchagavya.

Most of the farmers are from Kottayam and together they have some 200 cows. But though they have one brand they operate independently. Production of milk and dung is not pooled. The farmers sell their products independently but ensure that the standards of the Vechur label are adhered to.

Pradeep Kottoor, a farmer from Ernakulam district, has four Vechur cows. “People who are physically weak and those who have allergies approach us, asking for desi milk. Many people drink it to improve their health in general. The reality is that demand is much higher than production,” he says.

The Samithi was started by Pradeep, Sebastian, Ajay and a veterinary doctor. The man on whose shoulders rests the responsibility of promoting desi cows and their products is the 50-year-old Dr N. Jayadevan, a government vet working as assistant director in the state’s animal husbandry department at Kanakkary, 20 km from Kottayam.

Though the label is Vechur, not all the 200 cows that these farmers have are Vechur cows. There are three more desi varieties being reared by the farmers — the Kasaragod Dwarf, Vilwadri and Cheruvally.

The Kasaragod Dwarf is the most popular currently. Each farmer has around five to six cows of this breed. However, Vechur is the only cow whose desi qualities have been recognised and notified by the Indian Council of Agriculture Research (ICAR) and the National Bureau of Animal Genetic Resources (NBAGR). Farmers say that the quality of milk and related products of other desi cows is the same as of the Vechur.

Sebastian has been rearing four Vechur cows for a decade. He owns one hectare on which he grows mainly coconut, nutmeg and banana. He has taken another 15 acres on lease for cultivation. “Actually, what attracted me to the desi cows was cost. It is much cheaper to use fertiliser made from the dung of desi cows like jeevamrutham. I use only this and no chemical fertilizers for my crops. I also began to realise that desi cow milk is very good for health,” he explains. He earns a net income of Rs 3,000 per month by selling desi cow products. 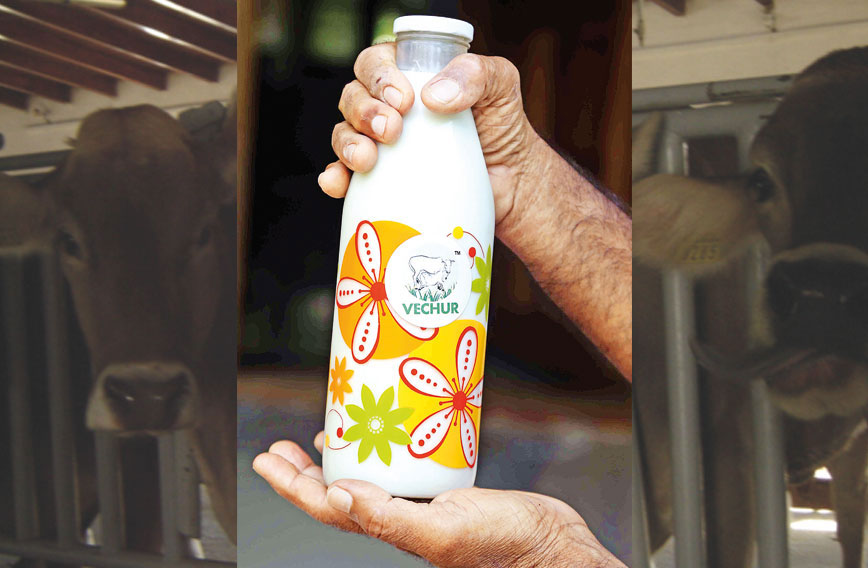 It was mainly due to propagation of ‘zero budget farming’ by well-known campaigner Subhash Palekar that interest in desi cows began to pick up in the past five years in Kerala. Palekar, who comes from the Vidarbha region of Maharashtra, wrote books and trained farmers in natural farming recommending jeevamrutham and panchagavyam made from the urine and dung of desi cows.

Awareness about the difference in quality between milk produced by crossbred cows, called A1 milk, and that from desi cows, called A2 milk, is also spreading. Campaigners for desi breeds like Dr Jayadevan have been conducting workshops in different parts of the state. A book, Devil in the Milk,  by Keith Woodward, a professor from New Zealand, has also contributed to raising the status of desi cows.

“Many of us are impressed by the use of jeevamrutham in farming. Demand for this nutrient preparation is rising. Families with only five or 10 cents of land can’t keep a cow. They need to go out and buy jeevamrutham. We started selling these soil nutrients in a small way to farmers in the neighbourhood,” says Dr Jayadevan.

The marketing of desi cow products started three years ago. As more and more people began making desi cow products, questions were raised about quality and standards. “In order to keep quality uniform and build trust, we thought branding was necessary for our products,” adds Sebastian. 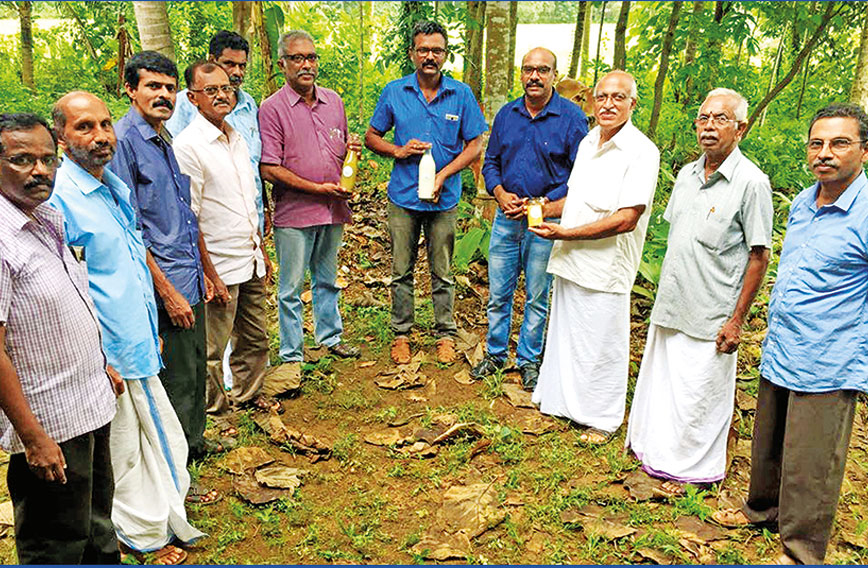 Members of  the Vechur Parirakshana Samithi

Native cows produce very little milk. Both the Vechur and Kasaragod Dwarf cows, even with very good rearing, yield just about three to 3.5 litres per day. This is not enough to meet the cost of their maintenance. Those who started rearing desi cows soon realised that, without any means to augment their income, they would not be able to afford to keep the cows for long.

“To encourage farmers to conserve desi cows, it is important to develop a market for desi cow products. The farmer then has an income and an incentive,” points out Dr Jayadevan.

Although the farmers got their Vechur trademark and logo approved in September, they have been working on their idea for the past two years. Dr Jayadevan has been conducting classes in rearing desi cows and in making different milk and dung products.

The Vechur Parirakshana Samithi doesn’t have an office. Interested buyers go to the homes of the Samithi members and buy cow products. For jeevamrutham, they need to inform the member in advance. All products are reasonably priced. Milk is sold at Rs 120 per litre. Jeevamrutham costs `15 per litre and ghee, which has high demand, is priced at Rs 2,500 per kg.

“Milk of Indian breed cattle is rich in beta A2 protein,” explains Dr Jayadevan. “This has beneficial properties. It guards us against lifestyle diseases and degenerative illnesses like Type 2 diabetes, hypertension, Alzheimer’s and so on. It has lactose that doesn’t cause a problem for the lactose intolerant. The fat globule size of A2 is comparable to human milk. This makes it easily digestible. The milk is especially good for children and convalescents.”

Adds Dr Jayadevan, “Desi milk can act as an ideal vehicle for neurotrophic medicines because its constituents can pass the blood-brain barrier. Take, for example, Brahmi leaves that are used to enhance memory. On its own the herb might not reach the brain. But Brahmi Ghrutam (ghee made with Brahmi leaves and desi ghee) can easily reach the brain. A2 milk is rich in phospholipids, the basic constituent of the human brain. It has ample cerebrosides too. This plays a positive role in brain development, improving memory and cognitive thinking.”

Around 50 years ago, people in Kerala took to crossbreeding of cows with great enthusiasm. The state, infected by this fervour, passed the Kerala Livestock Development Act, 1961, that made castration compulsory for local breeds. Private ownership of bulls that weren’t certified as castrated by the authorities wasn’t permitted. This sounded the death knell for native cow varieties. The Act still exists but is not insisted upon and is likely to be scrapped eventually.

In 1988 the Kerala Agriculture University initiated a programme to conserve the Vechur cow. Later, a trust was formed to breed this cow and make it popular. Today, Kerala has around 2,000 Vechur cows.

Slowly, the state government also realised its mistakes. Now, the same Kerala Livestock Development Board which was enthusiastically promoting crossbred cows is offering an incentive of Rs 10,000 for buying a Vechur cow. Frozen semen of the Vechur breed is widely available in all 1,000 government veterinary clinics spread over the state.

“Our organisation faces many challenges. We are still at the infant stage,” says Dr Jayadevan. “Our Samithi members are spread over five districts. Coordinating them is not easy. In fact, it requires a full-time person. I am able to spare very little time as I have a profession to look after. Potential customers don’t know about us. Currently, information about the Samithi is spreading by word of mouth. Supplying products to faraway places is another problem we face.”

Yet, say members of the Samithi, they are able to meet 75 percent of the demand for desi cow products. Of course, enlightening a new customer about the benefits of native cow products requires considerable time and energy.

“There is huge demand for jeevamruthan,” says Sebastian. “The reason is that within one-and-a-half months of using it the farmer can see the difference it makes to his field.” Dr Jayadevan keeps conducting half-day workshops on native cow rearing and making products like jeevamrutham. Last year, he did a workshop at the famous CMS College, Kottayam. Within a few months, students started making these products and selling them at exhibitions.

“Native cows have an inbuilt capacity to withstand climatic changes. They have considerable resistance to tropical contagious diseases. In the 10 years I have been working on this issue, I have come across very few cases of mastitis, and foot and mouth disease among desi cows,” says Dr Jayadevan.

The importance of the Vechur brand is that for the first time a sustainable model to rear desi cows has been showcased. It has created demand for agricultural inputs like jeevamrutham. More and more people now understand the differences between A1 and A2 milk. Therefore, the Kottayam model of branding has good chances of spreading to other areas of the state.

Because of many practical limitations, increasing A2 milk production is easier said than done. The traditional dairy industry will keep supplying A1 milk to consumers for a long time without much challenge. According to Dr Jayadevan, many Kerala dairies are rearing a few Gir cows. They add Gir cow milk to their crossbred cows’ milk to improve its quality. “By 2030, Kerala’s cattlesheds will have a considerable number of big desi cows like Gir, Sahiwal, Thaparkar and so on. With the help of these, the state will reach a level where 25 percent of the milk it produces will be A2,” he says.

The Kerala government has already decided to bring 100 Gir cows from Gujarat to Kerala for experimental rearing. “This is a welcome move, but these cows shouldn’t overshadow our own smaller breeds that are affordable and convenient for the common man,” says Dr Jayadevan. It costs `250 per day to maintain a bull of a local breed. Dr Jayadevan suggests the government provide a direct cash incentive to farmers as they are contributing in a big way to conserving local livestock biodiversity.