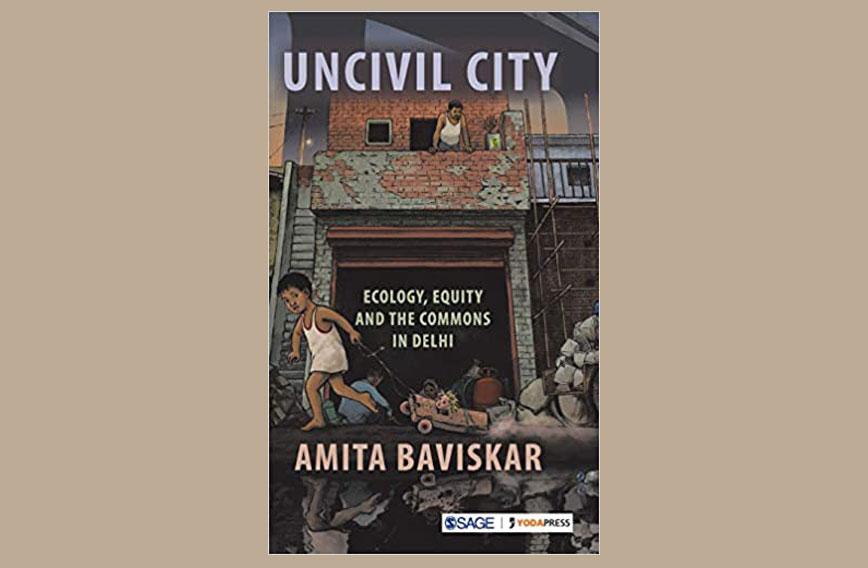 How far has green activism by Delhi’s middle class benefited the city? It hasn’t resolved a single problem and it has also marginalized the urban poor. That’s the thesis of this volume by Amita Baviskar, professor of sociology at the Institute of Economic Growth in New Delhi. Her  opinion, and it’s a convincing one,  is that ‘bourgeois environmentalists’ have made Delhi unfair and unlivable. Strong words.

The first part of her book, ‘Remaking landscapes and lives,’ focuses on the exploitative relationship between the State and the urban poor. Historically, the labouring classes have been invisible to Delhi’s rulers. They built the city, but the British ignored them as well as the natives. When India gained independence, Delhi’s power elite turned a blind eye to the plight of the city’s builders. They weren’t included in master plans or housing schemes or in basic services.

Planners, and subsequently the middle class, wanted a city that was clean,  green and ‘world class’. But Delhi’s labouring class subverted such plans by building their homes anyway, on vacant land they could find, whether it was the banks of the Yamuna or a low-lying plot. They worked as domestic help, daily wagers, chowkidars, street vendors, rickshaw-pullers and so on. There was demand for their labour, but no recognition of their rights.

Baviskar recounts the saga of evictions that followed, beginning with the Emergency, when slums from the Walled City were banished to east Delhi, then a swampy outpost. She ends with the Commonwealth Games when large-scale eviction relegated slums to the outskirts of the city on stretches of land with no services.

Apart from NGOs, nobody objected. The Asian Games and the Commonwealth Games, promoted as public spectacles, were seen as national activities, she writes. Opposing them, on any ground, was deemed anti-national. Yet, it was the labouring class which built Delhi’s flyovers, roads, stadiums and its smart Metro, its world-class infrastructure.

In the second part of her book, ‘Contesting the Commons’, Baviskar turns her attention to middle-class activism for the environment which caused impoverishment and misery to the urban poor. It was MC Mehta, the famed environmentalist-lawyer, who led this battle for a clean and green Delhi through the courts. Justice Kuldeep Singh, the ‘green judge’, was sympathetic and a line-up of PILs on such causes followed.

Mehta’s PIL against dust pollution led to the closure of mining activities on the outskirts of the city. The one against polluting industries forced hundreds of factories to shut down or migrate to other states. The rising prices of real estate were an incentive for some factory owners, writes Baviskar. According to the Delhi Janwadi Adhikar Manch, some 250,000 workers lost their jobs and received no compensation because 90 percent weren’t permanent employees.

Strangely, no survey was done on how much each industry polluted. The accusation was based on what they produced and not on actual emissions and pollutants.

The focus of most green activism was on streets, the Ridge and the Yamuna.  Baviskar’s chapter, ‘Cows, cars and cycle rickshaws’ is almost humorous. The middle-class aspiration for orderly streets and traffic was sabotaged by cows and buffaloes which belong to the Gujjars, traditional inhabitants of the city, who live in some of Delhi’s 276 urban villages. Their pastures and fields were acquired by the state to accommodate the expanding city. All attempts to relocate their dairies have come to naught.

The municipal corporation even launched a cash-for-catch scheme: catch a cow and win Rs 2,000. Only seven cows were caught. Cycle rickshaws, an ecofriendly mode of transport, were hounded by the police and the municipal corporation. Baviskar recounts how the Yamuna became a contested site, eyed by real estate. Slums were evicted — they were causing all the pollution in the river according to activists. The Games Village sprang up on the land they vacated, a massive temple and much else.

Baviskar is kinder to environmentalists protecting the Ridge and to some extent to those fighting to protect Mangar Bani, the only sacred forest struggling to survive in the National Capital Region in the Aravalis between Gurgaon and Faridabad.

The question is, why do the urban poor have no voice although they are a vote bank? To some extent, Baviskar answers this question. The urban poor are seen as migrants despite living in the city for decades. They lack strong organizations who could speak for them. Their concerns are seen as personal and not public, unlike green activism.

Baviskar’s book is comprehensive and readable. But several NGOs have also done good research-based activism and we need many more of them. Hopefully, things are changing on the ground. No eviction has taken place in recent years by the Delhi government which has been providing services to slums. Regularization of slum settlements was an election issue taken up even by the BJP. The visibility of migrant labour during this recent lockdown may lead to a change in the mindset of green crusaders. And the Yamuna looks cleaner with industries shut.