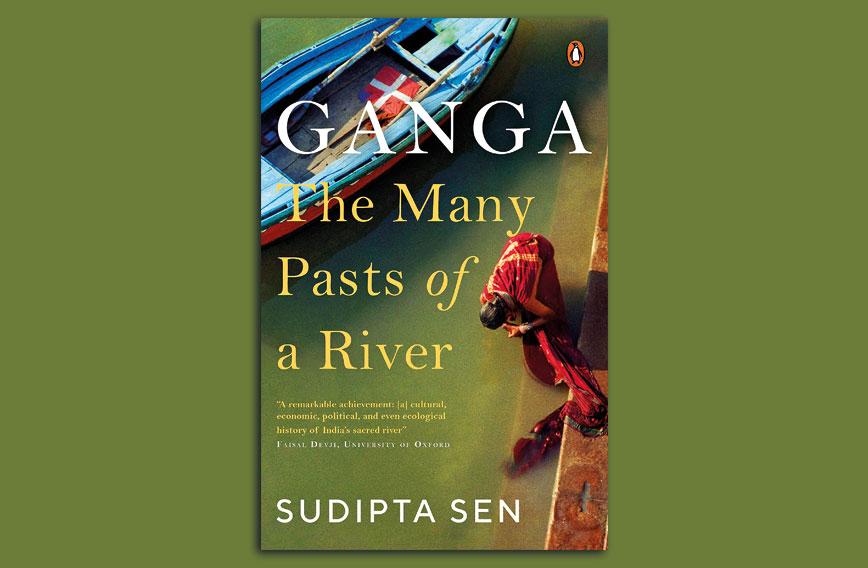 Sudipta Sen takes us down the Ganga on many rare journeys

The Ganga strangely represents the physical manifestation of an accepted mythological duality — to be divine and vulnerable at any given time. Revered as a goddess, the river is endowed with two contrasting characters: one as an eternal deity of flowing waters, the other as a carrier of accumulated human misdeeds. This beguiling duality has allowed the river to be worshipped and neglected at the same time, regardless of its worth as a finite and tangible resource. Flowing through the heart of an ancient civilisation, the unholy alliance between purity and pollution has kept this enigmatic cultural icon on the very edge of survival. It continues to survive nonetheless!

In an insightful account of the myth, religion, history and development of the sacred river, Sudipta Sen, a historian from the University of California, delves into the duality of approaches adopted to ease the Ganga of the vexing problems afflicting its purity and flow. While attempts to cleanse the river of its pollution load have been victims of their own top-down ambitious scope, the mythological history of the river makes it difficult for multitudes of Indians to accept that the river may be in imminent danger. Despite the evidence of an unprecedented ecological decline, the unstinted faith in the divine powers of the river makes it easy for a vast majority to espouse confidence that the Ganga will never go dry like the great Yellow River of China.

But can the Ganga’s miraculous powers heal its own scars? Sen lets mythology speak for itself to serve a possible clue. During her descent to the world, an anxious Ganga had asked King Bhagiratha: where shall she cleanse herself after people wash off all their sins in her waters? In his unexpected reply, the king had expressed confidence in the moral obligation of all upright mortals to carry out the unenviable task of expiating the sins of the world. Such is the power of mythology that it continues to inspire faith that the collective power of the sinners will rise one day to restore the river to its pristine state. Will it?

Within the study of the significant historical moments that shaped the river, the book offers two parallel but inter-related threads that connect the mythical and historical with climate and ecology in getting a sense of the cumulative consequences of human activity from the past to the present. Far from learning any lessons from its rich history, argues the author, the uneven contours of the past are very much at work today. The purest of all rivers continues to remain the most polluted. And, there is no getting away from the fact that the great cultural icon is in trouble, suffocated by dams, encroached by overcrowding and desecrated by discharge.

Ganga contains, for anyone interested in how a river shapes human culture and its history, stimulating multilayered interpretations on its metaphysical threshold. It is an ambitious undertaking that blends geography, ecology, mythology and religion in presenting an intimate biography of a most sacred and beloved river. It is as much a celebration of its glorious past as a mourning of its pathetic present. It is a scholarly treatise which, by the author’s own admission, took 12 years to write, and is essential reading for those interested in understanding a river from its diverse social, cultural and spiritual perspectives.

The book offers no quick fixes on redeeming the river from the civilisational onslaught. It instead asks why the Ganga, held in such reverence across a multitude of religious traditions, remains hostage to the promise of development and risks of degradation. It provokes the discerning reader into grappling with the river’s rich past and its most uncertain future. At a time when the cleansing and the purification of the Ganga have become an urgent and much-vaunted national priority, the book offers a nuanced understanding of the river from a cultural and civilisational perspective. A river which has watered and nurtured an entire civilisation from time immemorial cannot be left contaminated, carrying an unbearable burden of silt and detritus. Sen argues that it is time we identify what stands in the way of tangible progress toward a cleaner and healthier river. The time to act has never been as urgent!

Dr Sudhirendar Sharma is an independent writer, researcher and academic