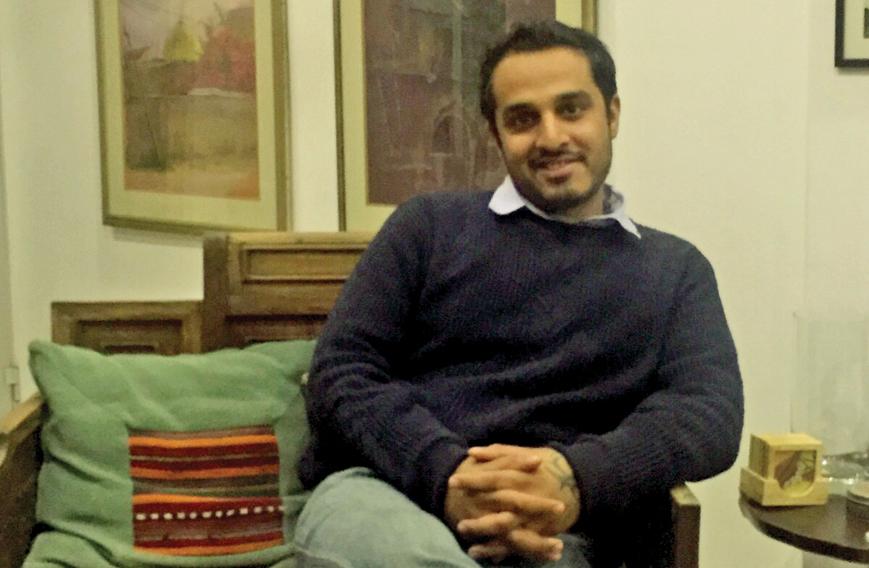 Searching for Shiva in Pakistan

In the face of rising extremism and intolerance Haroon Khalid, journalist and educationist, sets off on a journey in the reverse direction. He goes off to explore Pakistan’s folk religious culture and uncovers its links to Hinduism and history. He then writes a book with an intriguing title, In Search of Shiva. 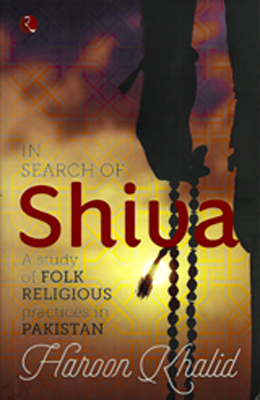 Shiva in Pakistan? In his book, Haroon identifies shrines in the names of Sufi saints dotted on Pakistan’s landscape that have survived the trauma of time and the onslaught of puritanism. Revered by ordinary folk, most of these shrines pre-date Partition. Their religious practices are still a veritable mix of folklore and tradition. Each shrine he visits has a story to tell and some hark back to the Indus Valley Civilisation.

There is a shrine where women worship the phallic symbol for fertility, reminiscent of the cult of Shiva. In another shrine there is a wishing tree where women fast for nine days, the Muslim version of the Hindu festival of Navratri. Haroon also draws an analogy between the dervish dance and the dance of Shiva.

The middle class in Pakistan, too, unconsciously practises traditions that are syncretist. Connections between Islam and Hinduism — the qawwali, Sufi saints, folklore, poetry — are very old.

But such cultural synthesis, remnants of Pakistan’s indigenous traditions, are unlikely to survive. The country has turned its back on its South Asian roots. The state has for decades promoted a conservative stream of religion.

Haroon studied anthropology at the Lahore University of Management and Sciences. He writes for Pakistan’s Friday Times, Nepal’s Himal, and the Indian website, scroll.in.

His first book, A White Trail, was a sensitive portrayal of Pakistan’s religious minorities. In Search of Shiva is a brave book and hopeful. Perhaps, maybe, sometime in the future, Pakistan will acknowledge its long forgotten pluralistic identity and be proud of it.

Civil Society spoke to Haroon about his journey of discovery and his new book.

You explored Pakistan’s folk religious practices during a difficult time. How did the idea originate and what motivated you to go ahead?

Unfortunately, the difficult times in Pakistan have continued for a long period. I came of age in these ‘difficult’ times. In fact, my motivation to embark on a writer’s journey is primarily due to these difficult times.

I grew up in the shadow of 9/11, which resulted in further polarisation and Islamisation of my society. Instances of religious violence increased by several fold in the decade following 9/11. Hence, religion became a part of all discourse — political, economic and cultural. It was in this climate that I started exploring the folk religious practices of Pakistan, traditions that defied religious extremism.

Perhaps, if times had not been difficult in Pakistan, I would never have explored these shrines and traditions because there wouldn’t have been any need. However, given that things turned out so badly, I felt that it is essential to share and celebrate these stories of syncretism and inclusivity.

You have also delved into research, in history, folklore, philosophy, and into understanding Hinduism for your book. Did you receive help and encouragement for your research? Were there hindrances as well?

I have been studying the philosophy, history and folklore of Hinduism for quite some time now. When I started, people I know used to be surprised at my interest. It is very unusual for a Pakistani Muslim to be interested in Hinduism. Our entire nationalism is premised on this separation of Hinduism from Islam and hence Pakistan. Therefore, you can imagine the curiosity that my fascination would inspire in people.

Initially, my family members and friends would ask me genuinely why I wouldn’t study Islamic history or heritage. They would tell me that I am a Hindu at heart. They would then joke, during India-Pakistan cricket matches, that I must support India. This also highlights how closely religiosity and nationalism are entangled here. Just a couple of days ago, I told one of my old friends whom I met after a long time the name of my new book. “You are still stuck there,” he replied with surprise.

What has made the shrine culture survive despite Partition and rising puritanical thought?

For one, the shrine culture is deeply embedded in the psyche of the people here. These shrines are centuries old. A lot of Sufis were also poets, like Baba Farid, Shah Hussain and Bulleh Shah. Their poetry forms an integral part of folk culture. Therefore, it would be impossible to remove their influence from society without radically changing its culture, which is what is happening now, unfortunately.

One can see radicalism and intolerance moving from the periphery of society into its mainstream. Only recently a large segment of the lawyer community protested against a local beverage called Shezan owned by an Ahmadi family. A few days ago, traders of the most important plaza here that sells mobile phones and computers refused to cater to Ahmadi clients.

With puritanism and intolerance creeping into our society these shrines are also coming under threat. Almost all the major shrines of our country have been bombed. The educated middle class is also moving away from such syncretism and preferring a more literal and puritanical version of Islam.

Having said that, I would also not glorify these shrines as emblems of tolerance and syncretism. In principle, such Sufi shrines represent tolerance, but in practice, they are becoming intolerant. Till a few years ago women were allowed access into the Qawwali Hall at Dara Darbar, the largest shrine in Lahore, but now they are not. Another example is that of Mumtaz Qadri, the assassin of Salman Taseer, the Governor of Punjab. His surname, Qadri, suggests that he belongs to the Qadri sect, a Sufi sect.

What was your best experience while exploring shrines?

The stories that I have covered for the book have been compiled over a couple of years. Initially, I was shocked to see a Muslim shrine where dogs are revered or a shrine where every year thousands of transgender people get together to celebrate a Muslim Sufi saint.

However, very soon, I realised that my fascination came purely from my vantage point — my education and geographical location. For locals these were regular shrines and religious practices. They were ordinary. It was this ordinariness of these extraordinary shrines that I enjoyed the most.

When I went back home and did my research I found out that almost all of these practices go back thousands of years, some even to the ancient civilisation of the Indus Valley. It is because of this very reason that for locals these shrines are ordinary. Their ancestors have been revering them for thousands of years.

What was also fascinating to learn is that such religious traditions existed in multiple ancient societies. For example, in Pattoki I discovered the shrine of a Muslim saint who used to keep stray dogs for company. After his death, his dogs lived at his shrine and became sacred.

Centuries ago, the cynics of Greece used to do the same. The Holy Fools of early Christian sects also had a similar practice. Close to Chechawatni, I found a Muslim shrine where women make phallic offerings to pray for a child. You will find such fertility cults in all ancient societies. Looking at the common thread of all such religious traditions, it is safe to say that there is universality in the religious experience of humanity.

The Chisti order, as you write, is inclusive and plural and revered by both Muslims and Hindus. Why is the syncretism of Pakistan’s culture practised but not acknowledged?

That’s because Pakistan’s nationalism is premised on the concept of exclusivity. The Two-Nation Theory, which is believed to be the raison d’etre of Pakistan, propagates the idea that Hindus and Muslims are two different nations. Even if in principle the theory was used to make a political argument it has now been internalised. Therefore, any association with Hinduism or the Hindu past is believed to be a corruption of nationalism and religiosity. So you will see several religious traditions in Pakistan that originate in the Hindu past but to admit that would be difficult as it would lessen their significance.

A few years ago (the festival of) Basant in Lahore was banned. One of the biggest arguments against it was that it represented Hindu culture. A reason why the middle class does not go to shrines anymore is primarily because shrines are perceived as being influenced by Hindu culture.

Nowadays there is vibrant opposition to celebrating mehndi in Pakistani weddings because that too is believed to be a corruption from the Hindu past.

Therefore, in instances where syncretism still thrives there seems to be a sense of shame and wrongdoing. New stories and legends are created to explain the origin of the tradition or shrine, lest its Hindu past come back to haunt them.

For example, in the book I talked about an ancient banyan tree which is still revered by locals. Given the size of the tree, there is no doubt that it predates Islam and must have been revered by Hindus along with Muslims in pre-Partition India. However, after the creation of Pakistan it became impossible to worship a relic from the Hindu past. Hence a grave of a Sufi saint mysteriously came into existence and a new legend about the sacredness of the tree was crafted.

What has been the initial reaction to your book in Pakistan?

The book has been published in India so it takes a little while to get to Pakistan. It has only recently started popping up at bookstores here so I still have my fingers crossed. But I have been writing about such traditions and the non-Muslim history of Pakistan for almost a decade now and I have always received a positive response. All my readers and friends have expressed fascination with my research. One of my friends, who heard about the book, wants to work on a documentary with me.

But one needs to bear in mind that I write in English hence I cater only to a particular kind of audience. I have always been reluctant about translating my work into Urdu lest it be misunderstood. So, perhaps, to say that my work has been positively received in Pakistan would only be talking about a limited audience.

Did your last book, A White Trail, lead to some change?

I would like to believe so. My first book came out in 2013 and since then a number of interesting projects have been undertaken. A few months after my book was launched, a coffee table book from Pakistan that documented Hindu temples in the country was published. A friend of mine is now publishing another coffee table book on the religious festivals of minorities in Pakistan. A couple of academic books too have been published recently and there are a few in the pipeline.

Of course I cannot take credit for the wonderful work that people are doing but when I started talking about the cultural heritage of religious minorities in Pakistan there were only a couple of other writers and journalists in the country writing about such issues. Now there are several. Hence one can see that there is an increasing interest in religious minorities in Pakistan. Politically, of course, things haven’t changed much. But, given that many more voices are being raised, I am optimistic that things will change.