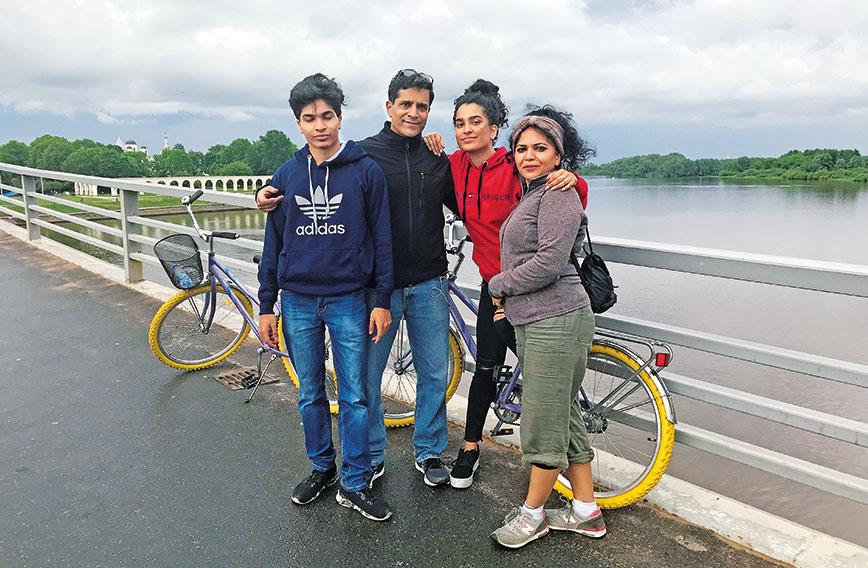 Jyoti Pande Lavakare with her children and husband

Not just another air pollution story

THERE was a time when concern over air pollution used to be treated as an exaggeration. Now it is just about everyone’s disturbing story. One family to the next there are cases of cancer, asthma and an array of mild and serious breathing disorders. As it has been with smoking, awareness has taken a long while to sink in. When it finally has, an enormous price has already been paid in terms of public health.

But if awareness has come, in public discourse there is a humdrum quality to the concern and very little of the urgency one would expect. It has become common for newspapers and TV channels to routinely report figures for particulate matter and pollutants in a way not dissimilar from how numbers are meant to sum up the highs and lows of a day’s trading on the stock exchanges. If you live in Delhi and the National Capital Region (NCR), chances are that you wake up in the morning and check your phone for air pollution levels in your area. Inside your room, an air purifier has already done its job. For a great many of us it has become acceptable to live in an inside world and an outside one as if the two can be separated.

Numbers have their own significance — at least to those who understand them. The real impact of air pollution is, however, better understood from people’s lives. The loss of near and dear ones. Children with scarred and compromised lungs. Asthmatics tied to inhalers. Cancer survivors reduced to a mere fraction of their original selves.

It is this that makes Jyoti Pande Lavakare’s book a significant addition to literature on air pollution in India. It is both a personal story and an activist’s thesis. Numbers and lives come together to jolt us out of our private air-purified worlds to face the reality outside. Since she has journalistic flair, Pande Lavakare succeeds in being both engrossing and rigorous. It is a well-woven narrative that takes us into hospitals, homes and courtrooms.

We right away know from the title, ‘Breathing here is injurious to your health’, that the book addresses pollution in everyday life. We need to breathe to live and when the air around us is foul we are half alive and increasingly dead. It is a reality that confronted the author when she lost her mother to lung cancer — just like that with no major warning signs. Decades spent in Kolkata and Delhi had taken their toll. Air pollution makes everyone into passive smokers with superfine particulate matter taken in over the years blocking airways and triggering cellular changes.

As she watched her mother die, and the doctor linked it to what bad air does, the author came upfront and close to air pollution like she never had before. It was no longer a mere statistic, which is what her mother’s painful death like the deaths of so many others would have become were it not for this book.

What long-term exposure to air pollution does to the lungs is the larger question. All the evidence points to the consequences being horrible. Bad air doesn’t just stop at the lungs but invades the body in its entirety.

Having lived in Kolkata and written what were the first air pollution stories in the country in the 80’s, almost four decades ago, this reviewer has seen the impact air pollution has. The data of those years is fundamentally no different from the data of today. But Kolkata  chose to live in denial, succumbing slowly to air pollution even when the signs of what was happening were there for all to see. For example, at least one chemist in central Kolkata set up a separate store for cancer drugs — such was the rush of patients!

Pande Lavakare’s book is personal in other ways too. She and her husband relocated to Delhi from the US where they had a comfortable and prosperous life. They had no reason to return except that they wanted their son and daughter to grow up close to their cultural roots. Air pollution makes her wonder whether they did the right thing. Did an emotional decision result in compromising the health of their children?

Many Indian children, of course, just don’t have a choice. Their parents, in fact, might not even know how badly their health is being damaged or that a better life elsewhere exists. Tackling air pollution is thus a great responsibility that rests with governments and must be shouldered with complete seriousness. It is not just the short-term public health cost involved, but also what the next generation is being condemned to. Children growing up in the midst of pollution are being tarnished in ways that haven’t been fully documented. It is criminal for governments to neglect their responsibility.

Pande Lavakare is an accomplished journalist. It is what brings detail and balance to the book, which races along. But while in Delhi she discovers the activist in herself with Care For Air, an NGO. She also fraternizes with the expat community in the capital. The book takes us to their concerns and fears about air pollution. In a microcosm we get what the world thinks of a polluted India. For an economy eager to be lauded globally, dealing with pollution needs to be priority. It is not that bad air is solely an Indian phenomenon. It is the failure to deal with it in earnest that is problematic and brings bad press.

How can air pollution be dealt with? So many things have been tried with limited success. Each step has been important but has served as no more than a band-aid for a systemic malady. There have been improvements in fuel quality, CNG for public transport, bans on generators, curbs on thermal power plants and most recently odd and even numbers for private vehicles. It is not a complete list of initiatives, but the air hasn’t become cleaner.

The answer really lies in better urbanization in India. The Indian city, in the way it has developed, can’t be repaired. A complete rethink and rejig are needed. Urban loads should be rationalized. An overarching vision is needed for the role of cities and together with it should come the willingness to empower local governments so that regulation improves and becomes effective.

Cities are meant to be drivers of opportunity and growth. Left to fend for themselves without adequate finances and systems of governance, they easily sink into chaos. The headlines tend to be about Delhi and some of the bigger cities, but urban areas in general are in a mess. Pollution is an outcome which won’t go away anytime soon till urbanization in India becomes more orderly.