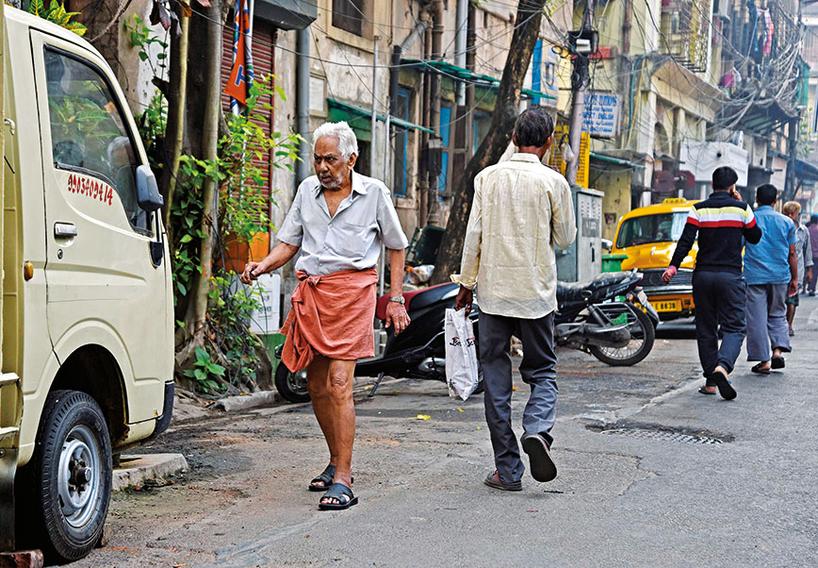 P.T. Nair walks down the road in Kansaripara

The village yogi never gets alms. Thus goes the oft-repeated Bengali saying. In other words, familiarity breeds contempt. And that certainly holds true for Parameswaran Thankappan Nair, better known as P.T. Nair, the well-known urban historian from a Kerala village who made Kolkata his home after he arrived here as a young man in 1955. In all these years, Nair has written 62 books on Kolkata and about 600 articles. His latest book is on Gandhi in Kolkata which will be released at the upcoming Book Fair, although he will not
be present.

While he was working in the city, the media hardly took cognisance of his presence. But the moment they got wind that he was leaving the city for good on November 22, reporters and TV channels almost crowded him out of his tiny, bare, two-room home in an old house of Kansaripara in Bhowanipore. For years Nair had lived alone; of late, his wife, Seetha, a retired teacher, had been living there with him. Once his most precious possessions were his books on the city, 3,000 of which the Kolkata Municipal Corporation acquired in 1999. These are housed in the Town Hall library, although accessibility is a problem. 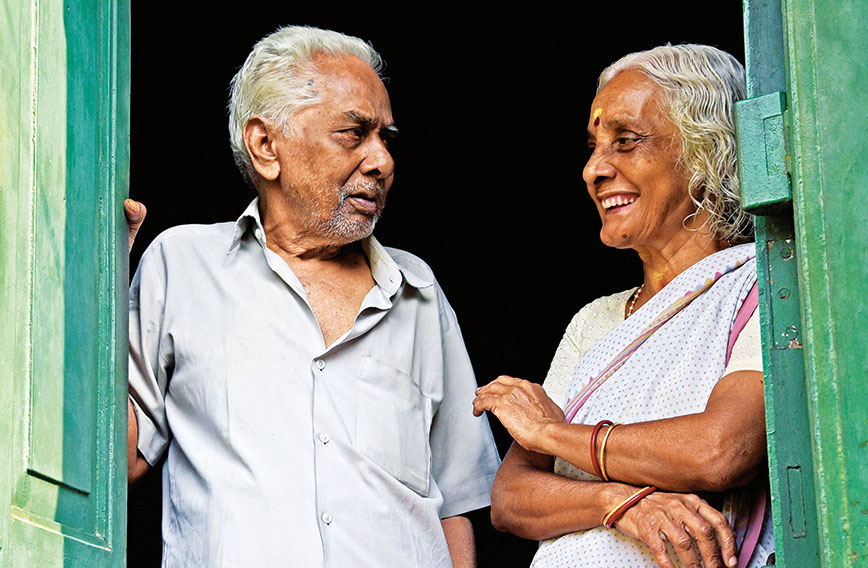 Nair with his wife, Seetha

Nair left the city because his grandchildren wanted him to return, and he left behind 350 books with a trusted friend. These are meant to be donated to a suitable institution. His other prized possession, also left with his friend, is his trusted Remington typewriter meant for knocking out his innumerable articles and books. His two-room flat has been returned to the landlord.

When I went to meet him on the morning of November 21, his two rooms were empty, except for his typewriter and work table. Some journalists had dropped by. Wearing a lungi and a shirt, as he always does at home, Nair’s face looked puffy and he had a stubby chin. The other sign of age is his inability to recall facts in a trice. He fumbles for words before he speaks in his heavily accented English. Even after all these years, Nair has been unable to master Bengali, although he admits he understands it well enough. A charge that is often brought against him is that his research is hampered by his lack of understanding of the vernacular. Nair retaliates, saying he is entirely dependent on unimpeachable source material — all in English.

Yet, Nair knew the ins and outs of the city in such detail that he won the praise of that pioneering Kolkata researcher, Radharaman Mitra, who in the first part of his Kolikata Darshan mentioned a question that Nair had raised in a letter to the editor of The Statesman. Nair had pointed out that the Mayor’s Court was always in the “white” town around Dalhousie Square. So why is a lane in north Kolkata named Old Mayor’s Court? Mitra had taken for granted that it was a knowledgeable Bengali making the query. In actuality, it was a South Indian gentleman.

At 86, Nair is still fighting fit. In Kolkata, he used to go on his daily visits to the National Library. It was only a 10-minute walk from his home, he explained. When I called him a few days after he reached his village, Alwaye, near Kochi airport and railway station, he seemed to be enjoying himself with his grandchildren. Earlier, he lived in rented rooms. Now he is the master of all he surveys. “There are four acres of land here. We have coconut plantations, apart from a garden. I have to look after everything,” he chuckled.

Nair explained that Alwaye was not where he was born. Kerala still being a matriarchal society, he is living at his wife’s place. Historically, Alwaye is very interesting because the Portuguese set up India’s first printing press here. Since the village is so close to the port, the Jews settled here too. If there is time to spare, perhaps Nair will delve into its history, because nobody has studied it before.

Yet, P.T. Nair is only a bachelor of arts and a non-practising lawyer. Since the early ’70s, when little material was available on Kolkata, Nair gathered material from different catalogues of archives all over the world, sometimes with the help of friends. His collection of books contained a complete set of Bengal Past and Present from 1907 up to present times, which is priceless. “Most of my books were collected from the Dharamtala-Wellington crossing and College Street. At Dharamtala you can still get books on a particular subject, whereas in College Street books on various subjects are available.”

Nair emphasises that the National Library has a treasure trove of material on the city as well as a 300-volume Union Catalogue of the American Library of Congress and a 100-volume British Museum catalogue. And so “you needn’t go anywhere”. He collected documents on Job Charnock from Fort St George in Chennai which dispelled myths about the man who reportedly founded the city.

Nair was born in 1933 at Manjapra in Ernakulam district near Kalady where Adi Sankaracharya was born. In school, the focus was on Sanskrit, although he was taught English and his mother tongue as well. After arriving in Kolkata, he began working as a typist. He used to live with friends near Deshapriya Park and after working for some time as a stenographer in Dalhousie Square, he landed a job with the Anthropological Survey of India. Later, he devoted his time entirely to research, while his wife taught in a school.

Nair recalls his early days. “From the day I came to Calcutta I started taking an interest in the city. Whenever I saw a building or a monument, I started collecting material, including in-depth information from other sources,” he says. He used to take the tram from Kalighat to reach his office and look around the city. He feels neither Dalhousie Square nor the city, which has no doubt expanded, has changed much. At one point of time, he worked for Engineering Times, depending entirely on common sense because he had no technical knowledge.

Although Nair believes that all heritage buildings must be preserved and strengthened, those which have no heritage status could be demolished. He is in favour of development. He stresses that if the owner of a beautiful building cannot afford repairs, either the state government or the Corporation should look after it for such buildings cannot be built again.