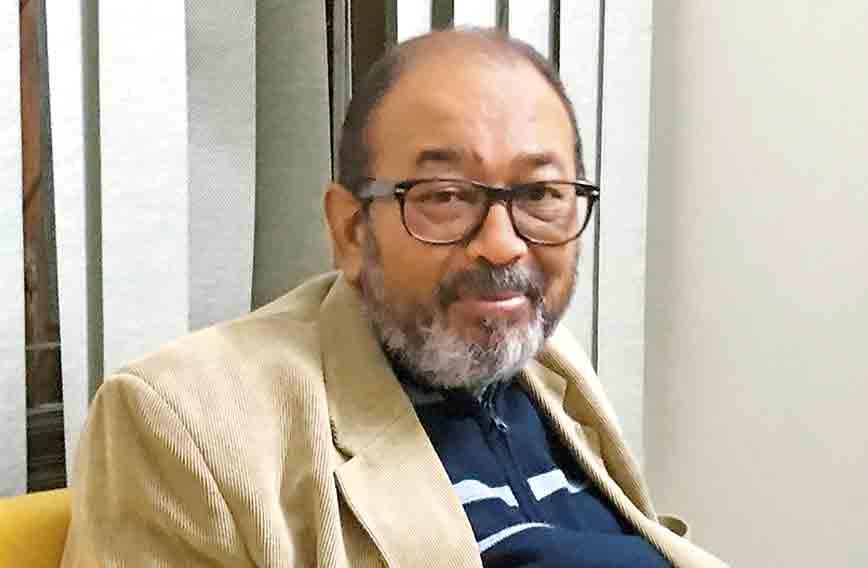 Nilanjan Mukhopadhyay: ‘Modi is no reformer'

From the Hindutva beat, real Modi and Ayodhya stories

WHEN Nilanjan Mukhopadhyay began reporting on the RSS-BJP-VHP combine in the 1980s, it was not a popular beat amongst reporters. Living in a flat in Delhi’s Munirka, he would walk to the nearest Sankat Mochan temple where members of the Vishwa Hindu Parishad (VHP) often gathered for a puri-bhaji breakfast. Mukhopadhyay’s impeccable Hindi — he hails from Western UP – his kurta-pyjama outfit and unobtrusive manner, put the VHP rank and file at ease. They spoke frankly to him. He says he was intrigued by them.

Since then Mukhopadhyay, now 61, has doggedly written on the Hindu right and closely tracked its strategies, agitations, politics, ideology and writings. He has interviewed the top leadership of the BJP-RSS-VHP as well as their cadres at the grassroots. An eyewitness of the exponential growth of the RSS-BJP and its affiliates, Mukhopadhyay realized early on the significance of what was unfolding. He never underrated the abilities of the Sangh Parivar.

His first book was in 1994, Demolition: India at the Crossroads.  In 2009, out of the blue, he decided to write a biography of Narendra Modi. Mukhopadhyay recalls calling up and telling him, “I want to write a book on you.” Modi replied, “Likhiye.” “It won’t be an authorized book,” warned Mukhopadhyay. “When have you written anything authorized?” was Modi’s cryptic reply. He did get to speak to Modi and spend time with him. But, he says, after he spoke to ‘certain people’ his access was blocked. In 2015, came his book on the massacre of Sikhs after Indira Gandhi’s assassination, Sikhs — The Untold Agony of 1984.

“You know, after my biography of Modi (Narendra Modi: The Man, The Times) was published in 2013, business houses kept inviting me for chats. Their understanding of Modi was that he would be a tremendous reformer. I laughed and said he is not going to be a Hindu Margaret Thatcher. And when Modi came to power in Delhi, the first thing he said was, My government is for the last man on the street. He committed himself to Antyodaya,” says Mukhopadhyay. In 2019, he wrote The RSS — Icons of the Hindu Right, demystifying the RSS, plunging into its world and its most important personalities.

His recent book, The Demolition and the Verdict, is a masterly account of the Ayodhya issue right from the origins of the dispute to the demolition of the Babri Masjid and the Supreme Court verdict of November 9, 2019, handing over ownership of the disputed land to the Ram Janmabhoomi trust to build the Ram temple. Mukhopadhyay delves deep into the thinking behind the Ayodhya agitation, the politicians, the narrative, the strategies, and the aftermath of the demolition. The Ram Janmabhoomi movement was structured to gain political power and change the very idea of India and, thus far, it has succeeded.

The book is engrossing, combining research with journalistic flair.  Mukhopadhyay, who says he really wanted to become an environmental journalist, has become instead India’s foremost writer on the Hindu right.

With the success of the Ram Janmabhoomi agitation, is the Nehruvian idea of India as a plural, secular republic dead or has it just been tempered?

I definitely think that the world view of India that we grew up with from the 1950s and the dream at Independence have suffered a huge setback. Look at events just before the Uttar Pradesh (UP)  elections — the BJP narrative of Ayodhya-Varanasi-Mathura, Arvind Kejriwal going to Ayodhya, starting a pilgrimage service, Mayawati beginning her campaign from Ayodhya, Priyanka Gandhi waving a sword at a rally in Varanasi, starting her speech with a Durga sloka….

I am agnostic but I have no problems with people being personally religious. But bringing religion into political and public life is something that has happened. Everyone is playing the same hockey game, shooting the same goal. You have no goalkeeper trying to save a certain territory. There is no one in public life saying that there is no harm in making the minorities feel secure. Or making the statement Manmohan Singh made several years ago at the National Development Council that minorities have the first right to the nation’s resources. There is no harm in saying, Look, our Constitution says the majority has to work to make the minorities feel secure.

The dominant belief is that this is a country of Hindus. Muslims stayed back after Partition, that was their choice. Now, if they want to live here, they must do so on our terms and conditions.  They must respect our ideas, ideals and iconic figures. Modi has said that and I quoted his exact words verbatim in his biography which I wrote eight years ago. This is now being said openly.

So everyone is following the BJP rule book?

Yes. Everybody feels there is greater acceptance of the Hindutva ideology. Even between 2004 and 2014, the Congress and its allies were not able to roll back any of the ideological gains the BJP made. Or narrow the widening of their base over several years including between 1998 and 2004.

Throughout the Ram Janmabhoomi movement, nobody could counter the strong narrative of the RSS-BJP — not the political parties, nor the Left, the liberals or the Babri Masjid Action Committee. Why?

See, the Babri Masjid Action Committee went to the other extreme. Because of that they enabled the VHP to mobilize people. That was one of the more serious mistakes they made. I’ve written about it in my book. Syed Shahabuddin later accepted in private that they should not have done so. Similarly, Shah Bano. I don’t think the Rajiv Gandhi government should have capitulated. They should have stood firmly behind the Supreme Court judgment. It would not have given rise to the sentiment among Hindus that these guys are wavering.

A number of missteps were taken by the Muslim community too?

The Muslim leadership, not the community. The Muslim leadership was a contested territory in the 1980s. They were scattered across political parties but the bulk of the Muslim elite leadership was with the Congress since the 1950s. These leaders, after the Shah Bano case and the opening of the Babri Masjid gates, provided the opportunity for a new leadership to emerge. This was also the time when economic expansion among Muslims started taking place. They are also an intensely caste-divided society with Pasmanda Muslims at the bottom.

The new leadership that emerged, like Shahabuddin, started directly contesting with people like Imam Bukhari. The thinking was, the more extreme a posture I take, the more support I will be able to get from the Muslim community. It enabled the VHP to say, Look, the Muslims are ganging up against us.

The first time I heard the word ‘reverse polarization’ was in 1991. The discussion was with (K.N.) Govindacharya on elections in Muzaffarnagar which had a significant population of Muslims. They dominated in 20 to 25 seats. Govindacharya said it was good if Muslims were there in large numbers because Hindus were there in even larger numbers. We will tell them, Look, Muslims are getting together. They will polarize so we will reverse polarize.

Why is it in every speech, be it Modi or Yogi, the first point they emphasize is danga? It’s because the rioter is synonymous with the Muslim or those backing them. So it’s a vicious nexus they’ve created. Anyone who is not with the BJP is against the government, the country, against Hindu society and with Muslims and Pakistan.

Are there any chinks in the BJP armour?

Caste. It remains a major chink. During the Ram Janmabhoomi agitation the trishul became a political weapon. What does each of those prongs represent? The central one is anti-Muslim prejudice and communal politics. The second one is social engineering, another phrase introduced to us journalists by Govindacharya.  He enabled us to decode the BJP because of his openness. The others wouldn’t speak to us or would speak in such obtuse language that none of us could understand. At that time, most of us who reported on the BJP were essentially English-speaking, left-of-centre journalists of Nehruvian stock.

After the 1991 elections the BJP won a majority in UP. Kalyan Singh became the CM. He was a Lodh Rajput, an OBC, it was explained to us. The old-style politics began unravelling at this time after the Mandal award. Everyone was groping in the dark, trying to understand its long-term implications.

At that time my understanding of the Sangh was not sufficient. When I went back and read the Pune Vasant Vyakhyanmala lecture of Balasaheb Deoras (the third Sarsanghchalak of the RSS) where he talks of the need to broaden the social horizon of the RSS, I realized that’s where it began. Yet, despite its commitment to widen its social base, the BJP still remains, in its basic orientation, essentially a savarna organization.

The third prong of Hindu nationalistic policy — social welfarism — has been devised by Modi. It was not there during Vajpayee’s time. That is what has enabled a tremendous amount of support for the BJP — free food and MGNREGA. Money, under welfarism, is being doled out for political reasons.

The Indian economy is on a downward swing for the past five years. There is rising disparity. This entire system holds together because of a very strong political narrative which is: this is our country, I have given you a sense of dignity, restore your dignity so that a foreigner, an invader, cannot exploit you. This idea, that our present crisis is less important than restoring what we lost in the past, has become the dominant narrative.

How do you bridge this polarization?

An academic in the US who does all kinds of data analysis has analyzed Twitter engagements of some 15 to 20 leading Indian journalists at the top of Twitter engagements. Two important findings emerged: one, those who tweet in Hindi are doing better in terms of being followed. Second, the more aggressive and abusive you are, the greater your engagement. People like Barkha (Dutt) are falling behind. So the narrative is becoming more abusive in the country. That has to do with the coarseness that has been introduced in the past 10 years, which we have to take stock of.

Where do you see majoritarianism taking this country?

I think this is a cyclical process. There will be periods of conflict interspersed with periods when people will say: Humko adjust karke rehna hai. That sentiment will become dominant. This will continue alongside the vacating of public space by religious minorities. I see them receding into pockets. There will be occasional excessive bouts of localized violence but maybe not at the national level.

I don’t see a reversal of the Hindutva narrative in a big way. Unless some political party forms an alternative government and has a clear idea of what has to be rolled back. But between 2004 and 2014 was there one decisive action the Congress took to recover lost terrain from the BJP? After the High Court judgment of 2000 on Ayodhya, what did the Congress do? It did nothing.