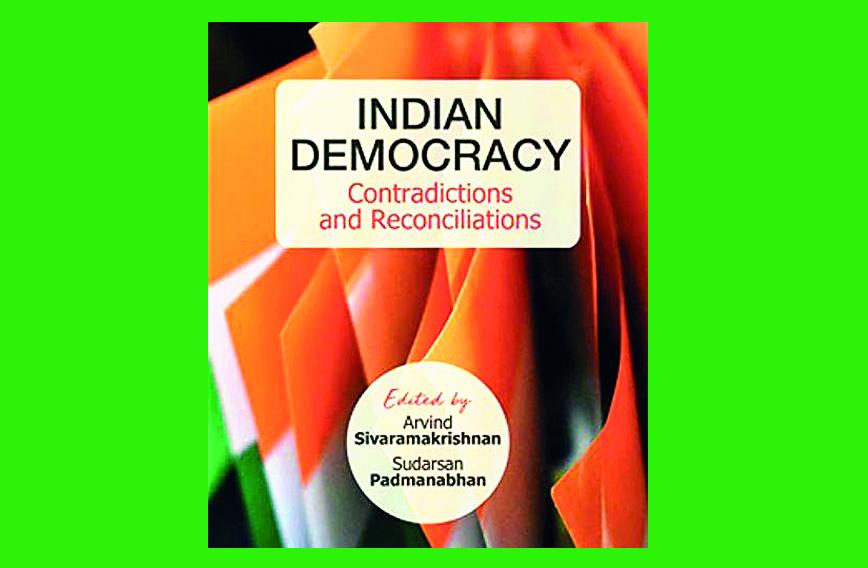 While there seems broad agreement about Brazil, the Philippines, and Turkey being erstwhile democracies moving progressively away from democratic principles, even India, the UK, and the US are widely considered to be on a similar path. It is this thought that the editors of the book, Arvind Sivaramakrishnan and Sudarsan Padmanabhan, express when they write, “Almost inevitably in democracies, strong tendencies occasionally emerge which in effect reduce democracy to electoral politics as the only form of political activity. Major political parties seem to do this very often….”

In an attempt to “outline the ways Indian democracy has shaped and reshaped itself in the last six decades, in the light of the Indian republic’s theoretical foundations, institutional mechanisms and certain kinds of political processes”, the editors have got 13 contributors to write essays on different facets of Indian democracy.

Starting with the origins of democracy in Athens and referring to the writings of Socrates, Plato, and Aristotle, Padmanabhan reviews the broad sweep of the history of the Constitution of India, focussing on ‘procedural versus substantive’ democracy, concluding that “the Indian Constitution became the crucible of negotiation and contestation between antinomic interpretations of the Indian democratic experiment”.

N.L. Rajah also takes a deep dive into the constitutional, legislative, and judicial history of the Constitution, pointing out that “Elections in this country owe their origin to the elections to the Provincial Councils of 1937.” The status of the Election Commission of India was decided in the Constituent Assembly where Ambedkar said “Therefore, so far as the fundamental question is concerned that the election machinery should be outside the control of the executive Government, there has been no dispute.” Two other important issues dealt with by Rajah are that democracy was made a basic feature of the Constitution, with “free and fair elections” being an integral part of democracy, and the right to vote “a constitutional right” even if it is not a fundamental right.

The next chapter in this first broad theme is by S.Y. Quraishi and describes a successful attempt by the Election Commission called the Systematic Voters Education for Electoral Participation (SVEEP), to increase voter participation. Sivaramakrishnan and Chris Terry present a case for considering replacing the first-past-the-post system by a proportional representation system.

The theme, “Political Processes”, consists of four chapters. In the first one, N. Gopalaswami chronicles the success of the Election Commission of India over the years. Next, M.G. Devasahayam describes the movement led by Jayaprakash Narayan against the proclamation of emergency in 1975 by Indira Gandhi. Five landmark cases on different aspects of electoral reforms are described by myself, showing that “the road to reforming politics and elections through legal changes is long and tortuous”. Following the dictum that “governance is too important an issue to be left only to big Government,” Trilochan Sastry describes a nationwide survey of voter perceptions. Results of the survey unambiguously show that the issues that voters considered very important do not find mention in what the candidates and parties talked about during election campaigns.

The theme, “The Practice of Democracy”, consists of six chapters on the interplay of democracy on various aspects of social functioning. Two of the chapters, by Wendy Singer, and by Josephine Anthony and Padmanabhan, deal with women and gender issues. A.V. Balasubramanian highlights the importance of organic agriculture. The chapter contains very useful information but its connection with democracy does not come across. R. Azhargarasan presents a thought-provoking evaluation of how effective Indian democracy has been in emancipating the traditionally depressed classes in Indian society. C. Kuppuswamy makes an interesting case that India has exercised only “passive sovereignty” in its approach to intellectual property legislation.

The authorship of the last chapter is attributed to a civil society organisation, Arappor Iykkam, set up in 2015 when Chennai experienced unprecedented floods. The experience of dealing with the Chennai floods of 2015 resulted in valuable insights: “An enlightened and active citizenry is key to saving democracy and making it participatory, making it functional, making it real, making it work,” and “One of the key ways in which Governments of the day subvert democracy is by making institutions of democracy non-functional.”

Given the size, complexity, and diversity of Indian democracy, it is impossible for any volume to deal with all of its “contradictions and reconciliations”. The volume under review does a reasonably good job of what the editors set out to do. The topics included in the volume appear to be quite disparate. It is not easy to decipher any common theme running through them. The volume would have benefitted from a concluding chapter which could have tied together the disparate issues covered. This does not, in any way, reduce the informative and thought-provoking value of the book. There are a number of observations spread over various chapters that appear uncannily relevant to the specific situation that Indian democracy finds itself in. Any student of Indian democracy or anyone interested in getting a peep into Indian democracy will find it of immense value.

Full disclosure: This reviewer is one of the 13 contributors