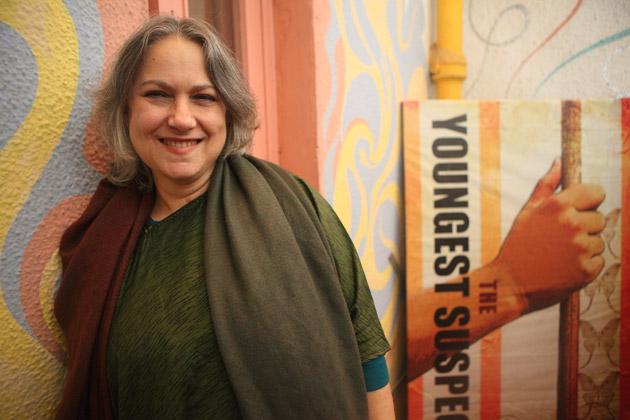 PEGGY Mohan’s second novel, The Youngest Suspect, is a fictionalized account of what happens when young Muslim boys are brutalized into confessing to terrorist crimes they did not commit. It is a novel on the aftermath of the 2002 Godhra riots in Gujarat, ‘an indictment of sorts of the Modi government,’ says Peggy Mohan.

After every terror attack, the police pick up young Muslim boys as suspects. They are tortured into writing confessions indicting themselves. Many of them turn out to be innocent. Yet they languish in jail for years. The stigma leaves their lives in tatters.

Mohan is a linguist from the Indian community in Trinidad. She did her doctoral thesis on Trinidad Bhojpuri. She has twice been an expert witness responsible for analyzing confessional statements in terrorism trials in India – once in the Parliament Attack case in 2002 and then for the Tiffin Bomb Trial in Ahmedabad in 2003.

As an eyewitness of POTA (Prevention of Terrorism Act) trials, Mohan could have written her book as fact, not fiction. But she wanted to relate her story with all its horrors through the eyes of those who suffered.

Mohan, who also teaches music at Vasant Valley School in New Delhi, spoke to Civil Society about her book.

Reading your book left me wondering how much of it was fact and how much was fiction. What was your objective in writing this book?

I have tried to capture the ground realities in Gujarat after the Godhra riots of 2002. The book is based on my personal experience as an expert witness called in by the defense in the Tiffin Bomb Trial in Ahmedabad. My job as an expert linguist was to analyse the confessional statements of the accused and convince the POTA Court in Ahmedabad that those confessions could not have been obtained the way the police were claiming.

My task was to refute the contention of the police that the confessional statements were verbatim depositions given freely and written down in real time. My testimony based on, among other things, a quantitative analysis of the speed of writing, the neatness of writing, sentence structure and highlighting the verbatim repetition of one particular paragraph containing the word for atonement, paschatap or pastavo, as the second and last paragraph of all the confessions, convinced the court that these statements could not have been spontaneously generated. This led to the acquittal of five of the 18 accused boys.

Moreover, the framing of charges by the police was also real. I found a woman journalist who interviewed the accused in jail and I saw her documents. The descriptions of torture including electrocution are all authentic and based on these documents. That is the reason why the descriptions ring so true.

So, where does fact end and fiction begin in your book?

Although the book is described as a ‘courtroom thriller and a love story’ on its back cover, it is based on the reality that Muslims are framed by the police to serve the political masters ruling the state.

The love story is fictional. The two chief protagonists – the boy Adil and the girl Megha – are actually metaphors. There are many coincidences. The boy represents young Muslims who are trying to get out of a ghetto existence and become part of the middle class. The girl represents civil society. They meet during the Godhra riots, and then again in jail when the girl is researching a media project.

There is an element of fact even in this fiction. All the five accused vanished after their acquittal. I understand one of them is now with a girl who waited nine months for him to come out of jail. You know, I always feel someday my doorbell will ring and a guy will come in and say my name is not Adil but you have written about me. Similarly, the three industrialists I have described in the book are real – I was actually reporting their views not making them up myself.

If so much of your book is based on actual experiences and events, why did you choose to adopt the fiction format?

The impact happens when you write about people you know. I wanted to see the situation through the eyes of the victims and the transformations they were going through as a result of this kind of state violence. Given the facts, what other opinion could I have except an indictment of such state-sponsored violence on innocent victims, especially minorities?

You may say the book is too political, that I am taking some kind of a political stand or that I am writing from a political standpoint. But I never set out to write a political story. Modi is not interesting. It is the people I found interesting – not just the victims but also all those ordinary middle class people who would normally abhor violence yet either accept or participate in communal violence.

Take, for example, the three industrialists mentioned in the book who wouldn’t employ Muslims. They never say that the violence did not happen – for them that was not important. It is an assertion of their communal identity in response to globalization when language vanishes and people within a community are no more able to communicate as they used to in the past. Of course, this is just a theory but I wanted to understand the mindset of all the people involved and portray the ground realities as well as I could. So I had to adopt the fictional format and use real experiences of individuals to explore the larger social issues.