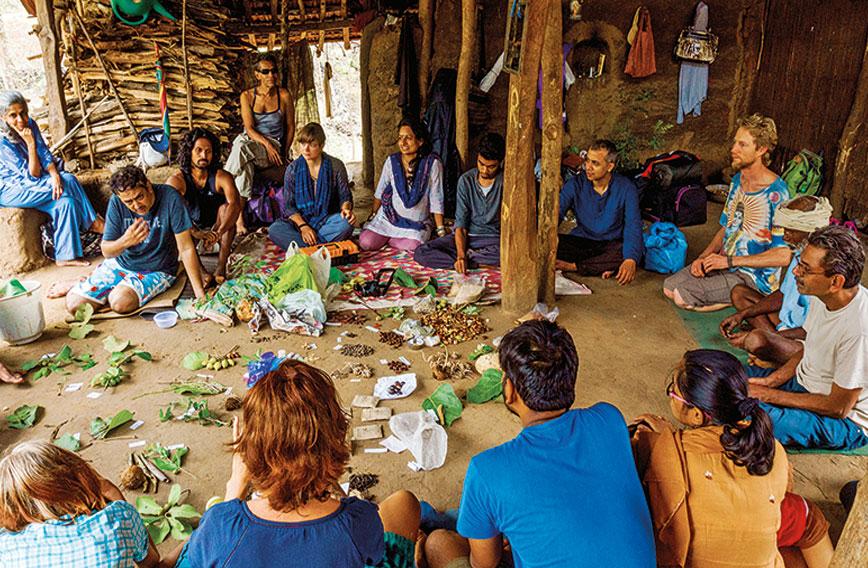 At Vanvadi the forest food festival will showcase over100 varieties of wild, forest foods from the North Western Ghats

Eating from a forest: Vanvadi becomes a dream come true

AS summer peters out and the monsoon sets in, the Sahyadari mountains in the Western Ghats brim over with forest foods. There are vegetables, fruits, vines and tubers that are endemic to these ranges and local people relish them.

At Vanvadi, a forest we have regenerated over 28 years in the foothills, the months of May and June saw the fruiting and ripening of karvanda, mahua, mango, jambul and tembrun.

With the first rains, there also emerged shoots of shevla. Brilliantly coloured and exotic looking at closer sight, this locally relished vegetable is cooked in a special way with another forest plant to remove its itchiness.

Shevla has some kind of an exotic status and fetches a fancy price in not-too-distant towns like Badlapur and Kalyan. You might also find it in the Dadar market in Mumbai.

All through June, small hordes of neighbouring villagers fanned out into the Vanvadi forest to hunt for shevla. They also looked for the tender, young shoots of several varieties of creepers that are cooked as delicious vegetables, and are quite abundantly available till about mid-July. 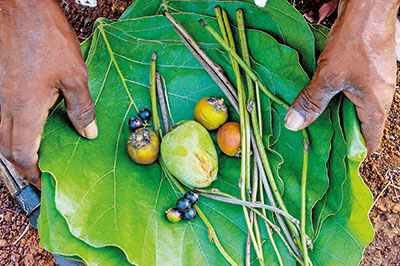 A few varieties of tubers like ol-kand are also consumed in the rains by the local older generation, who swear by their high nutritional value. The ol-kand tubers are securely tied in a small cloth bundle and left overnight in a flowing stream, then boiled and eaten the following day. The elders recall that in the past, especially during periods of food shortage, they survived — quite healthily — on this tuber.

Forest foods are special. They are untainted by chemicals, nutritious, therapeutic  and uniquely flavourful. But they are lost to people living in cities as forests disappear and organized farming supplies markets.

At Vanvadi we hold a forest food festival from time to time to create awareness and perhaps change tastes a little. The last was in 2018. We are doing one this year and calling it Forest Foods of the Konkan.

Both Sanjay Patil of BAIF and Nilam Jorwar of Kalsubai have done great work in documenting and spreading the word about forest foods. 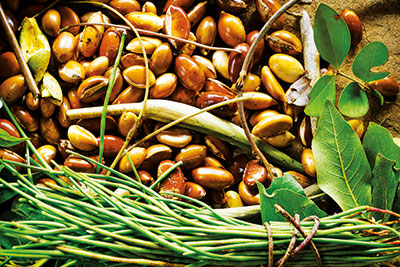 The gathering at Vanvadi will showcase over 100 varieties of wild/forest foods of this region. Other highlights will be ‘Forest Food Foraging Walks’ in small groups of eight to 10 with Adivasi elders; an interactive discussion on ‘Forests, Wild Foods and Adivasis’; and a wood fire-cooked lunch, served on plates made from the leaves of the palash tree, which has multiple medicinal uses.

Almost two decades earlier, in 1994, a number of us had pooled our resources to buy undulating land, now known as Vanvadi, in the foothills of the North Western Ghats. Our primary aim was ecological regeneration of the forest and local self-reliance. Over the years, the land regenerated into a magnificent forest: tall, dense and rich in biodiversity.

A survey of the botanical wealth of Vanvadi, based on local tribal knowledge, surprised us. The forest contained 52 species of uncultivated foods that provide edible yield (leaf, fruit, flower, stem, tuber/root), usually at a certain time of the year. The peak availability in our region is during the early monsoon, when the agricultural produce of the past year has been largely consumed and the farming population needs nourishment for the hard work of the new planting season.

In February 2014, I attended a vibrant Tribal Food Festival at Bissam Cuttack in the Niyamgiri foothills of Odisha. Over 600 Adivasis, about 80 percent of them women, gathered from around 200 tribal villages of different states in eastern and central India to celebrate the rich diversity of their traditional foods. More than 1,500 food varieties —cultivated and uncultivated, raw and cooked — were on display, including more than 900 uncultivated forest foods. There were 400 ready-to-eat recipes for sampling.

The late Debjeet Sarangi of Living Farms  that helped organize the Tribal Food Festival in Odisha told us: “Uncultivated foods provide a critical supplement to the diets of  local native communities. Often, in bio-diverse natural forests, there is a year-long supply of several hundred varieties of foods, ensuring diversity and nutritional balance in local diets.” 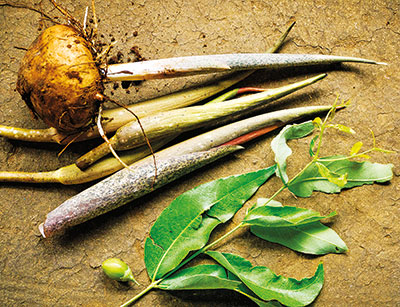 A recent study by Living Farms revealed that there was not a single household in its sample study of the Adivasis of the Niyamgiri hills and forests that reported it does not collect or consume uncultivated foods like wild tubers, greens, mushrooms, fruits, and so on. A wealth of living knowledge still exists in our indigenous communities regarding their forest bio-resources.

An Adivasi of the Pahari Korba tribe declared, “We Pahari Korba have always enjoyed a long and healthy life for generations, without any major ailments or diseases. For every minor disease, symptom or discomfort we depended on forest herbs, plants, vegetables to get well, and we never visited a drug store, hospital or took any injections.”

Other Adivasi tribals at the festival related how their uncultivated forest foods have been dependable sources of nutrition even during drought and agricultural failure, caused by increasingly erratic or scant rainfall.

But in many places, communities are now reporting a decline in the availability and consumption of uncultivated foods, due to a variety of external factors. Deforestation, displacement, urbanization, big dams, industrial mining, mega-plants, the spread of cash crops and monocultures all constitute a relentless assault on the biological and socio-cultural habitats of our enormously rich diversity of uncultivated foods, evolved over millennia.

An elderly Adivasi woman, participating in the 2014 Tribal Food Festival, lamented: “Now we see our own children, educated the modern way, getting culturally alienated from us. This younger generation knows little about our rich heritage and traditional, season-based food practices. I fear that our whole life, livelihood and culture may be lost forever if we do not start educating our children and future generations to conserve nature, live harmoniously with the seasons, and revive our traditional bio-diverse nutritional security.” 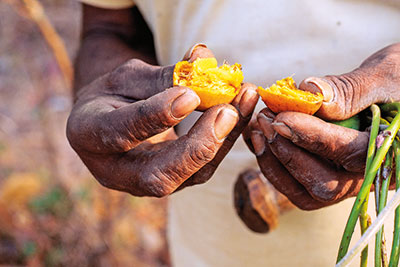 Devinder Sharma, a food and agricultural policy analyst, states, “Modern living has snapped the symbiotic relationship that existed with nature. Not many know that India is a mega-diversity region with over 51,000 plant species, but with hardly a handful being cultivated.”

At Vanvadi, a primary listing yielded over 120 forest species known to have various traditional uses. Apart from food yielding species, we discovered we had more than 45 plant species of known medicinal use and at least 20 timber species, including four rated as ‘first grade timber’. And then there are plants that yield natural dyes, soaps, edible oils, bio-fuels, gums and resins, botanical pesticides, leaf plates and so on apart from fodder, fuel, fibre, manure, hedge protection, craft material and the like. 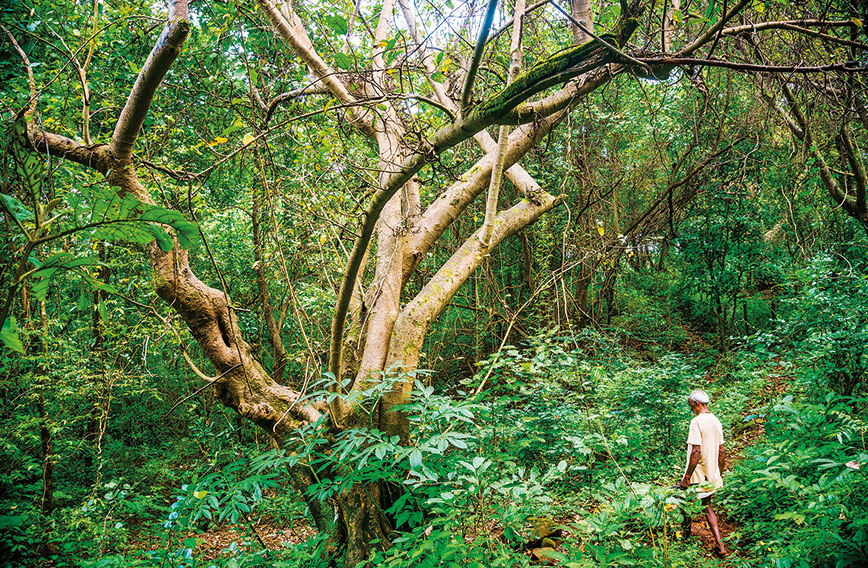 Many species have multiple uses. For example, the flowers of the mahua tree are used to make jaggery, liquor and dozens of food recipes among the Adivasi communities of central and eastern India. The fresh, green fruits can be cooked and eaten as a vegetable, or sun-dried and consumed months later. In our region of north Konkan in the Western Ghats, the seed of the mahua fruit is crushed to yield a cooking oil, far more wholesome than any brand available in the market. And the residual cake after extracting the oil is used to fertilize farm crops. It is also burnt with dried cow dung to smoke out mosquitoes.  When the mahua tree dies at a ripe old age, its wood is used for making carriages, furniture, sports goods, musical instruments, agricultural implements and for house and ship building.

The rich heritage of our forested regions sustained our Adivasi communities for generations beyond count. Today, if there are any people left on this earth who can teach our floundering ‘millennium generation’ the fine art and science of co-existing in harmony with the forest, it is these tribals. Or rather, just those among them who still retain the knowledge, skills, and the native cultural perspective.