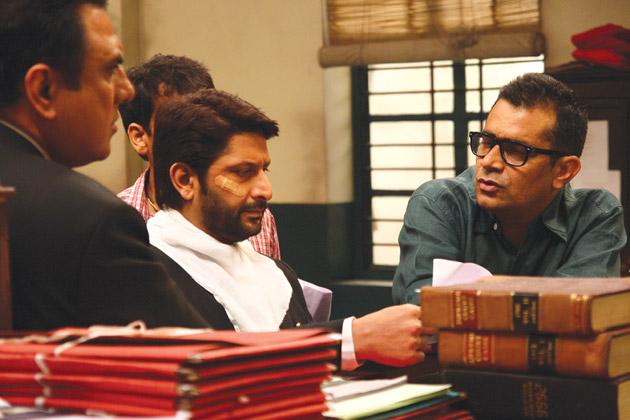 When writer-director Subhash Kapoor’s third feature film, Jolly LLB, opened in the multiplexes on the Ides of March, few expected it to set the box office on fire even though, by all accounts, it had the looks of an intelligent courtroom satire with the potential to earn critical encomiums. It did garner heaps of the latter, but it was the commercial success of the film that was the real surprise.

Jolly LLB is a low-budget film sans big names. So it did not trigger mass hysteria on the opening weekend. But its innate artistic quality and the acuity of its comment on the nation’s legal system generated enough word-of-mouth publicity to turn it into one of 2013’s first certified Bollywood hits.

“I was confident that Jolly LLB would strike a chord but I could not have anticipated that it would rake in `34 crores and would still be counting,” says Kapoor, a self-taught filmmaker and one-time television news journalist who covered politics in the national capital for several years in the late 1990s. “The film has held its ground despite big releases.”

Kapoor, a post-grad who was active in leftist student politics back in his college days in Delhi, knows the feeling all too well. Like his film, he has made it in the Mumbai movie industry entirely on his own steam, without assisting any established director, an early career exercise that many aspiring filmmakers take recourse to in order to secure a toehold in the business.

Armed with an MA degree in English Literature, Kapoor landed a job with the National Literacy Mission that allowed him to travel across parts of rural Uttar Pradesh and see for himself the plight of the real India. His empathy for the underdog was strengthened – it is a quality that comes in handy today as he goes about crafting sardonic cinematic fiction about themes and people that mainstream Bollywood tends to ignore as a rule.

Jolly LLB did get its share of free publicity when some lawyers sought to scuttle its release because they felt the film mocked their fraternity. “That was rather surprising,” says Kapoor on hindsight. “I did expect some murmurs of protest after the release of the film, but a case being filed merely on the basis of the promos was somewhat strange.”

“Jolly LLB,” he asserts, “is actually a highly positive film about the Indian judiciary – you come out cheering for the law and the underdog, a Meerut lawyer who triumphs against all odds. So I knew that the misgivings about the film would go away,” says the director.

He hails the “historic” Supreme Court verdict that paved the way for the release of Jolly LLB. “A two-judge bench ruled that if you don’t like the film, don’t watch it, but you can’t stop its release. Never before has such a ruling been delivered in the case of any film or, for that matter, any book,” says Kapoor.

The film benefits hugely from a clutch of impressive onscreen performances. Most notable is the one delivered by Saurabh Shukla, who invests the figure of the judge with an avuncular cheeriness that is completely at variance with the stuffily earnest air that a character presiding over a court hearing exudes in an average Hindi film.

Kapoor had the actor in mind when he conceived the character. “For me writing is a lonely process,” he explains. “I write alone and at night, so having an actor in mind while developing a role helps me in envisaging more clearly. It wasn’t just Saurabh, I also had Boman Irani and Arshad Warsi in my head right from the outset.”

“The success of Jolly LLB has given me the confidence to continue telling the stories that I want to tell without having to play strictly by the commercial rules of the mainstream movie industry,” says the director who made his debut in 2007 with the now-forgotten cricket-themed film Say Salaam India.

The release of his maiden film was timed to coincide with the 2007 World Cup hosted by the West Indies. India was knocked out of the tournament in the first round itself and, in the bargain, Say Salaam India – its tagline was ‘Let’s Bring the Cup Home’ – turned out to be a cold turkey that had no takers.

The directorial itch had well and truly struck Kapoor (along with his wife, he had set up an independent production company in 2001) when his pals from his news television days, Dibakar Banerjee and Shoojit Sircar, made their first films in the same year (2005) – Khosla Ka Ghosla and Yahaan respectively.

So, unfazed by his disastrous debut, Kapoor wrote another screenplay – it was initially titled Jagdish Tyagi LLB – and went out looking for funding. But the idea was shot down by everyone that he approached. The rejection was on the grounds that the world was in the midst of a recession and the Mumbai movie industry could not afford to bankroll an unconventional film like the one that he had in mind.

And that sowed the seeds of his second film, Phas Gaye Re Obama, about a recession-hit NRI businessman who returns to the badlands of Uttar Pradesh to sell a part of his ancestral property in order to save his home in the US. A gang, also in the grip of recession, kidnaps him unaware that he is no longer a millionaire.

The 2010 comedy built around an issue of global concern was anything but a blockbuster, but it was just the turning point that Kapoor was looking for. “The numbers at the box office were average but the film was critically lauded and well received,” he recalls.

It paved the way for Jolly LLB – the eventual title was borrowed from the name of Kapoor’s lawyer-friend Girish Sharma Jolly. “Jolly had a nice ring to it and I opted for it,” says the director.

The title, the promos and the film clicked. It is easy to see why. Jolly LLB addresses popular concerns about India’s judicial system but it isn’t a stodgy, preachy drama that talks down to its audience. The film draws its inspiration from real life incidents and newspaper headlines although none of the characters is actually modelled on anybody that Kapoor knows.

“You see somebody, find him or her interesting, you store away the impression, and it eventually emerges as  part of a story you want to narrate,” explains Kapoor, who spent hours in the Patiala House district and sessions court as a journalist.

It is this seamless blend of fictionalization and experiential memory that makes Jolly LLB out of the ordinary. The courtroom in Kapoor’s film is a real, tangible ordinary space and not the kind of larger-than-life, high drama-driven setting that popular Hindi cinema usually creates.

The judge is absolutely believable, as are the two key adversaries – the hotshot advocate who has the world at his feet (Boman Irani) and the cocky small-town lawyer (Arshad Warsi) in a hurry to make his mark.

“I wasn’t on the legal beat, but spent time inside the courtrooms on occasional assignments,” he reveals. “It struck me that the atmosphere in there was absolutely informal and often quite funny. I wonder why nobody had ever captured that on the screen before.”

The Mumbai movie industry was waiting for Subhash Kapoor and the wait has been worth it.