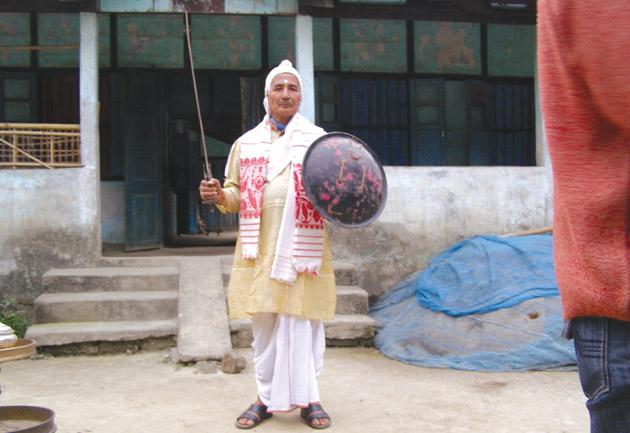 The ‘magical’ place is only a 40-km drive from Guwahati, but few youngsters in the capital city of Assam, hooked as they are to the fictional tales of Harry Potter and his Hogwarts School of Wizardry, have any idea of its existence.

Mayong – the name is believed to have originated from the word maya (illusion) – is a cluster of villages located on the banks of the Brahmaputra in Morigaon district. It is famed and feared as a land where “sorcerers and magicians” have held sway for centuries. Well, to be precise, the sway of the conjurers ended several decades ago, but the legacy lives on, crying for wider attention but palpably at ease with its anonymity. Should the magic and mystery of Mayong be allowed to disappear in the mist of time in the absence of scientific upkeep?

Unmissable signs of Mayong’s past are strewn all around – in rock inscriptions, in wall engravings, in the idols of Hindu deities, and the incantations written on manuscripts that have been stored for generations in households all across Mayong. But tourists who drive past this place on the way to  Pobitora Wildlife Sanctuary, home to the one-horned rhino, rarely, if ever, stop by to explore  these remnants of the past.

It is, therefore, significant that film critic-turned-filmmaker Utpal Borpujari decided to take a rare detour on one of his many trips to his native city. His sojourn has yielded a 53-minute documentary film, Mayong: Myth/Reality, which delves into the ancient secrets of these practitioners of the tantra school of Hinduism. The film had its first public screening at the India International Centre in New Delhi on March 11.

“I am an engineering graduate,” says Borpujari. “I strongly feel that the myth of Mayong needs to be unravelled from a scientific point of view. I am not an expert on occultism, so this film is only a document that is meant to be a record of what I saw and encountered. It is for those with greater understanding of this domain to go deeper into it, decipher it and preserve it for posterity.”

The knowledge that has driven the tantric practitioners of Mayong over the centuries is locked away in thousands of manuscripts handwritten in varied scripts, both on paper and birch-bark (locally called sanchi paat). A lack of proper and scientific preservation of the manuscripts is leading to slow destruction of a unique heritage. There is much disinformation in circulation about Mayong. Borpujari says: “People are wary of visiting the place because of its association with ‘dark’ practices.”

Mayong is still a predominantly rural outpost and still has a traditional king, who is the 40th in the line of descendants of the Kachari tribe rulers. A passage in Borpujari’s film is devoted to the king, Tarani Kanta Singha, a pale shadow of regality. His wife exhorts him to don the ceremonial attire. “A king should look like a king,” she says. When Singha does get into his royal guise, he only embodies the fading glory of Mayong.

It has a community of 100-odd magicians, but many of them, as the film reveals, are compelled to work as farm hands or masons to make a living. Time seems to have stood still here for too long, leaving the locals in a rather precarious socio-economic condition.

But attempts are being made to bring Mayong back into the limelight. A museum has been set up here to house some of the manuscripts. While these are being preserved with care, there are many more that are in need of urgent attention. “Almost every home in Mayong has inherited texts on magic from their ancestors,” says Borpujari, who is based in New Delhi.

“Many of these manuscripts have been stolen over the years; some others have been destroyed by the people of Mayong themselves to prevent them from falling into the wrong hands,” he adds. “There is a need for the Assam government to step in and rescue these historical texts from further damage.”

But not all the secrets, the filmmaker points out, are in a handwritten form. “Many of the magic spells have been passed down orally from generation to generation,” he says. “Some of the current practitioners are cagey about sharing them with strangers.”

Barring stray efforts by strong-willed researchers to study the history of Mayong and make sense of its mystical traditions, the ‘treasures’ that lie here have remained largely neglected. “Mayong is grappling with oblivion despite its unique place in Assam’s history,” says Borpujari. The National Mission for Manuscripts, a division of the Union Ministry of Culture, has now undertaken a project with the Srimanta Sankardev Kalakshetra, Guwahati, to preserve the Mayong manuscripts. Moreover, both the department of archaeology and the Assam tourism ministry have woken up to the potential of the place.

The filmmaker did a random survey in Guwahati on July 15, 2011, the day of the release of the last Harry Potter film, Harry Potter and the Deathly Hallows Part 2. Youngsters emerging from the movie theatre waxed eloquent about the power of the film, but were completely stumped when asked whether they knew where or what Mayong was.

The survey, which provides the prelude to Mayong: Myth/Reality, serves to highlight how little awareness there is of the local culture that is still deeply rooted in the ethos of a place only an hour away from Guwahati.

The core of the film, apart from highlighting the beauty of the landscape in which Mayong sits pretty, is devoted to bringing out the challenges that confront the people of a part of Assam that is still firmly tethered to the past even as the present swirls all around it.

For the film and its maker, the primary source of information about the traditions of the Mayong magicians, variously described as master tantrics, witch doctors, faith healers, herbal medicine men and mere performers – is Lokendra Hazarika, a local schoolteacher who  knows every nook and cranny of Mayong. No wonder the film describes him as “a one-stop information centre”. Old-timers and current practitioners of magic reveal details of Mayong’s hoary traditions by sharing their own reminiscences as well as their skills.

One bez (witch doctor), Tilak Hazarika, who refuses to speak about voodoo tricks, puts up a show that is as logic-defying as irrefutable. He chants mantras, casts a spell and sticks a bell-metal platter to the back of a man sitting upright, defying the law of gravity. Says Borpujari: “These men are very secretive. Many of them refused to reveal anything on camera. But off-camera, they talked freely.”

Historically, Assam has had a reputation as a hub of black magic. Even Sir Edward Albert Gait’s A History of Assam, published in 1906 and cited upfront in Mayong: Myth/Reality, refers to the dread the sorcerers of this region aroused in the rest of India. Several Mughal texts, too, talk about the mystics of Assam and their powers, which a general of Emperor Aurangzeb discovered to his consternation when he led an army against the Ahoms in the mid 17th century. He was routed in battle.

The onslaught of time has, however, pushed Mayong off the map. His film, Borpujari hopes, will help, if only in a small way, to bring the magic of the place back into focus.