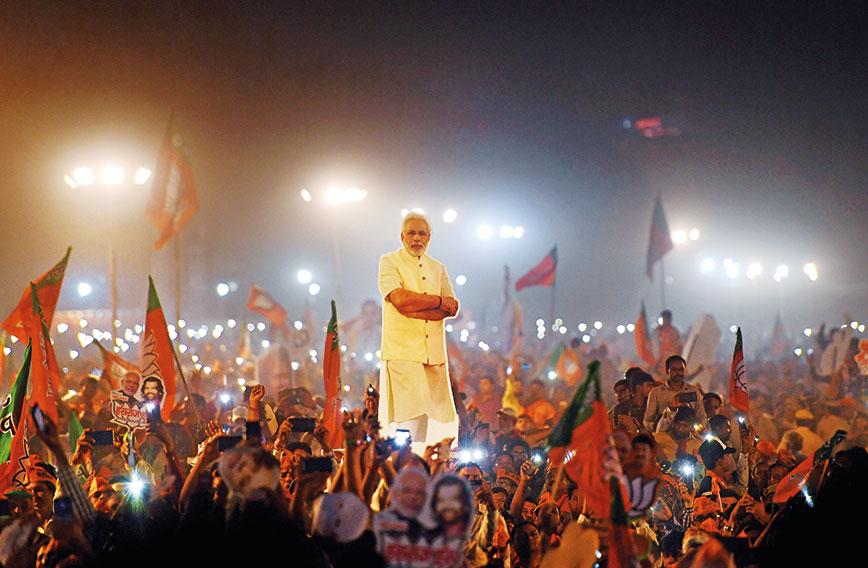 The urban middle class is solidly with the Big Leader

The COVID-19 pandemic has brought to the fore a paradox at the heart of the present political conjuncture in India. On the one hand, we have the most powerful and popular Prime Minister in office who is now known to an overwhelming majority of the country’s citizens. On the other hand, the State and government over which he presides are nowhere near being able to deliver on the expectations he has generated. Prime Minister Manmohan Singh used to often say, “promise less, deliver more”. Prime Minister Narendra Modi has willy-nilly pursued the opposite motto: “promise more, deliver less.”

The social, political and economic consequences of this paradox first became visible after the demonetization of the rupee. It is once again on display as the state and civil society grapple with the COVID-19 pandemic. I have always maintained in my writings that demonetization was a political intervention that had economic consequences. Its primary objective was not to unearth black money. It was an instrument used by a prime minister sitting in distant New Delhi to enter the life of every single citizen in the remotest parts of the country.

After Indira Gandhi no other prime minister had become a household name across the length and breadth of India. Modi’s victory in May 2014, with a little over 30 percent of the popular vote, was as much a negative vote against the Sonia Congress and its second avatar - UPA-2 - as it was for a leader of promise which Modi projected himself to be. That Modi had not yet established his brand and credentials would have become obvious to him when the BJP lost the assembly elections in Delhi and Bihar. Demonetization came in the run-up to the elections to the Uttar Pradesh assembly.

The common man silently supported the PM’s decision by patiently standing in queue to exchange old notes for new. The disruption to their life did not alienate voters. There were very few protests against demonetization. However, what the following weeks revealed were the shortcomings of the government — the delay in getting new notes out, the faulty ATMs, the disruption of the farm and small enterprises economy. The economy took a huge hit because the Indian state was not able enough to deliver on the hope and promise generated by a Strong Leader.

With the COVID-19 pandemic too we see this contradiction playing out. Public response to the one-day “Janata curfew” and the lockdown has been generally positive. Even the millions who walked miles to get to distant homes did so peacefully. As with demonetization, no violence, no display of anger, hunger and frustration. They heard the Strong Leader. They knew there was a global problem. They knew the pandemic would threaten their lives and livelihoods. Yet, they walked quietly home. They had no complaints against the Strong Leader. But they had no faith either in the capacity and capability of a weak State, that has rarely been able to deliver what they need. The limited capacity of the state to address the challenges posed by the pandemic stands in contrast to the hopes of an aspirational India generated by and invested in the Strong Leader.

The limitations in the capacity and capability of the state in dealing with the many consequences of the pandemic are imposed by several constraints. First and foremost is the constraint imposed by limited fiscal capacity of both the central and state governments. Second, the constraints imposed by the limited capacity of the public health and public sector healthcare system. Third, the inadequacy of human resources in almost all agencies of the state dealing with a national lockdown.

The Indian state has been fiscally constrained for a long time now. The challenge posed by a low direct taxes-GDP ratio has been compounded by the problems of transition from the erstwhile indirect taxes regime to a new goods and services tax system. A pre-existing problem of fiscal incapacity has been compounded by the economic slowdown, which in turn has contributed to a further reduction in government revenues. No Strong Leader can deliver on his big promises if the state treasury is weak and running low on cash.

As for the limitations of the public health and public sector healthcare system, one does not have to say much. For years the Indian state has neglected both. Even in the best of times the government is unable to handle the healthcare challenges of society – ranging from the care of the new-born child to that of the ailing elderly. Viral attacks come and go, and most of us manage. Thanks to our weather, natural immunity and so on, we survive disease and a virus. But when a pandemic of this magnitude hits the world, the inherent limitations of the public system in India present themselves as a constraint on the promise of the Big Leader. He knows that. And so he urges us to clap and light lamps for the few who still work in the healthcare system.

By describing the Indian state as ‘weak’ I am not for a moment denying the ability of the security forces to get tough when they want to. We have seen a lot of that toughness in the last few months. The weakness of the state — Gunnar Myrdal referred to the weakness describing the Indian state as ‘soft’ — lies in its inability to deliver in areas where it should. Certainly, education and health are two such areas where the state has failed to deliver.

The paradox of the popularity of a Strong Leader presiding over a Weak State may not be a paradox at all if we assume that the electorate’s one-third who voted for Modi are not as worried about these constraints as the two-thirds who may not have voted for him and are the ones walking home in search of food and care. The pandemic and the lockdown have brought to the fore issues of class. The urban middle class is solidly with the Big Leader. They are the ones who clap and light lamps, and watch Ramayana on TV over breakfast and dinner. But the Strong Leader needs and wants the continued support of the poorer millions, and they in turn want a more fiscally empowered state to fund a more caring and efficient public health and healthcare system.

Finding the financial and human resources that can enhance state capacity and capability so that government can deliver to the poor on the promise of the Strong Leader is the big challenge facing the government. How Narendra Modi manages to square the circle in the face of this challenge will define his prime ministership.

Sanjaya Baru is a writer and Distinguished Fellow at the Institute for Defence Studies & Analysis in New Delhi.