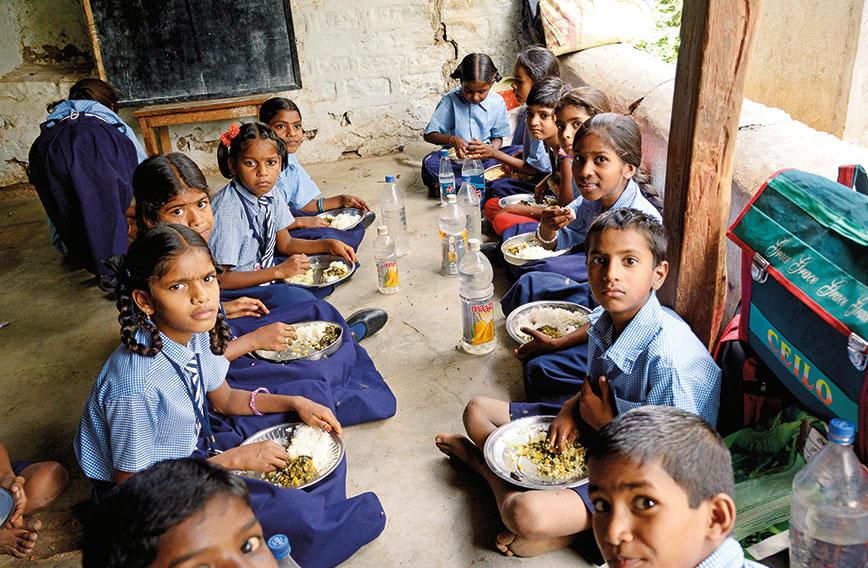 A midday meal for children in a government school

THE Global Hunger Index (GHI), published by two European non-government organizations, has been universally slammed in India both by government representatives, including the chairman of the Prime Minister’s Economic Advisory Council, and by professional economists. Poor methodology, questionable data collection through sample surveys and inadequate understanding of the difference between hunger and malnutrition made GHI an easy target.

As economist Sonalde Desai reminded us in a recent newspaper column, the controversy draws attention to the difficulties in constructing such indices in general and diverts attention from substantial arguments relating to statistics, their collection, the construction of an index and so on. The lay public is not interested in substantial arguments and only looks at and remembers numbers and country rankings. Hence the need for the government to get its message out.

There was a time when the general public paid little attention to such studies coming out of international organizations. In 1990 economist Amartya Sen (later a Nobel laureate), London School professor Meghnad Desai, and Pakistani economist and former finance minister Mahbub ul Haq constructed the Human Development Index (HDI) and the United Nations published a Human Development Report (HDR) with this index in it. It tried to measure country performance in education and health and not just gross domestic product (GDP).

When the first report came out, few in the Indian media showed any interest. Having just moved from academia to media that year, I took some interest in the HDR. Not only did I write about it, I was probably the only journalist who interviewed Dr Haq. That early association lasted a lifetime. Between 1991 and 2002, I was invited to almost every global launch of the HDR and in 1997 Dr Haq took me to New York to write a report on the global media response to the first five HDRs.

Since then, there has not only been a proliferation of such reports coming out of various United Nations organizations but also various global NGOs. Once again, few of these reports have drawn much attention because the governments of the day were not into seeking global approval or too irritated by disapproval. We are now into achhe din, and any sachchi baat coming from outside either excites us or makes us angry.

The Indian media is full of Westerners saying what a great place India is to do business in. Union ministers readily shake hands with them. When Western commentators criticize India, they are castigated as racist and worse. Indian businesspersons who are not willing to give such certificates about ‘ease of doing business’ are either frowned upon or worse, a knock on the door. Business organizations have become a department of the ministry of industry and commerce.

Coming back to the HDI. The big issue in the early years was India’s relative ranking with respect to its neighbours. While Dr Haq was a Pakistani, he was a student at Cambridge University, UK, and knew both Amartya Sen and Manmohan Singh well so no one accused him of any anti-India bias even though India had a low rank. Most were satisfied that India’s rank was higher than Pakistan’s.

During Prime Minister Narendra Modi’s first term in office, the World Bank’s Ease of Doing Business (EoDB) index became a hot topic because the report showed a dramatic improvement in India’s rank. When the report was published in 2017, the Union government organized a celebratory event in New Delhi, inviting the World Bank CEO, Kristalina Georgieva, a Hungarian. Prime Minister Modi attended the event and praised Ms Georgieva sky-high. The leadership of Indian business was in full attendance. No one wondered how this dramatic improvement had been constructed.

By 2021, Georgieva got caught in an EoDB scandal when an internal inquiry revealed that senior World Bank officials had tweaked numbers to favour China and Saudi Arabia. Many in the bank and in India felt that what had happened with China and Saudi Arabia, the World Bank’s major shareholders, may have happened with India too. The PM’s high praise for Ms Georgieva strengthened such doubt.

Whatever the facts, despite the ignominy of the scandal, Georgieva not only retained her job but, even before the scam broke out, was promoted as managing director of the International Monetary Fund. Cynics in Washington, DC, said the combined weight of China, India and Saudi Arabia had tilted the decision in her favour.

India has a schizophrenic attitude towards such international comparisons and indices. Countries like China do not really give a damn these days, in part because any negative news may not be reported at home and also because China has stopped seeking global approval.

Indians, both at home and overseas, are constantly looking for global approval and get very prickly when it does not come their way. Both the desperation for approval and the anger against disapproval have markedly increased this past decade.

Prime Minister Modi’s mega gatherings in the United States, in New York and Houston, when several US politicians stood in attendance and President Donald Trump walked hand in hand with him, excited his support base. But, when US politicians criticized India’s human rights record, religious bigotry and so on, all hell broke loose. The Hunger Index was so flawed that it got rejected and buried very quickly. But what’s the harm in flogging a dead horse a few more times!