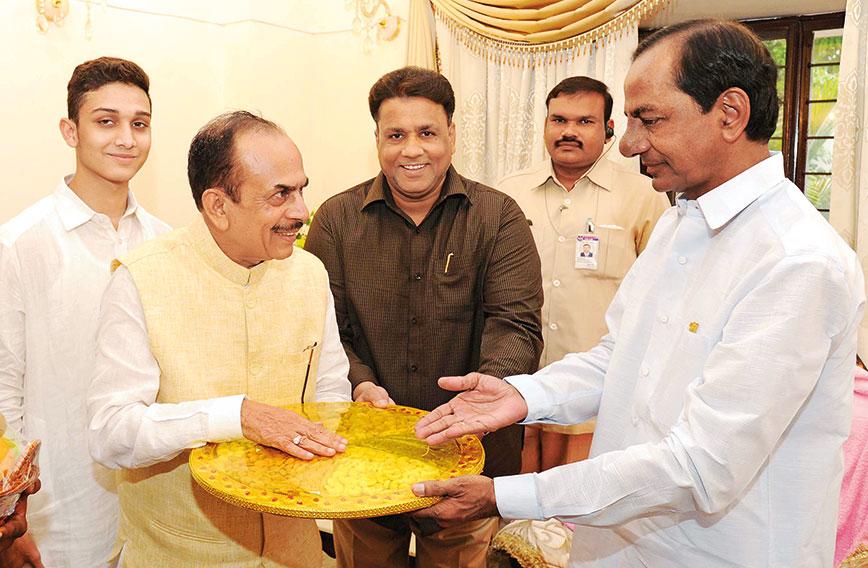 Chief Minister K. Chandrashekar Rao had a 'scooter'-sized ministry for over two months

Time was when Hyderabad had become famous for being home to the largest council of ministers. More recently it has been in the news for hosting the country’s smallest cabinet! Chief Minister T. Anjaiah had the misfortune to induct over 60 members of the state legislature in his council of ministers so as to ward off any dissidence. His was dubbed a jumbo ministry, given its size. By that token, Telangana chief minister K. Chandrashekar Rao had, for over two months in office, a ‘scooter’ sized ministry — with only a CM and a deputy CM in office.

Telangana Rashtra Samiti spokespersons have said that the delay in putting in place a full ministry was on account of Mr Rao’s plan to restructure departments. The media speculated that it had something to do with astrological constraints. Even so, Mr Rao has proved during his first two months in office, after re-election to a second term, that a government can be run by two ministers.

In trying to deal with whatever political exigency or astrological prediction he was faced with, Mr Rao has proved that governments do not require large ministries, even if the council of ministers has to have more than one person. This situation is a far call from the days when CMs and the PM had to form jumbo ministries to accommodate all manner of political constituents and their eager requirements.

Both the PM and the CMs have gotten over the restriction imposed by the 15 percent rule by inducting members of Parliament and State legislatures into positions that enable them to acquire all the perks and privileges of being a minister — a government house, with several aides and assistants, a government-owned vehicle or two with fuel paid for, air and train travel at government expense and so on. Thus, many state governments have inducted MLAs into government with the title of ‘parliamentary secretary.’

Prime Minister Manmohan Singh got over the 15 percent rule by liberally giving cabinet and minister of state rank to chairperson and members of the various official commissions and committees he appointed. In the past this privilege was enjoyed mainly by the Planning Commission whose deputy chairman had cabinet rank and members had MoS rank. But during the tenure of the United Progressive Alliance (UPA) government not only was this privilege extended to the National Advisory Council, headed by Sonia Gandhi, who enjoyed cabinet rank and privileges, but to a large number of expert committees like the National Knowledge Commission, headed by Sam Pitroda, the National Commission for Enterprises in Unorganised sector, chaired by Arjun Sengupta and so on.

Over the years many chief ministers have given cabinet rank to various MLAs heading some committee or the other, or some public enterprise or the other. An MLA chairing a committee and enjoying cabinet rank would ensure that his letterhead said so — chairman of so-and-so committee (with Cabinet Rank)! After all, at the end of the day, being a minister is mainly about perks and privileges, isn’t it. Most of the work is done by the permanent civil service.

Normally, the size of a ministry should not have administrative and governance consequences apart from inflicting a fiscal burden on the exchequer. However, there has been a negative fallout of the creation of more ministries than required. After all, the number of issues a government normally deals with are limited. So what does a CM or a PM do? Bisect, trisect and split ministries. Thus, instead of a Ministry for Education, we have a ministry for school education, higher education, technical education, and so on. Prime Minister Rajiv Gandhi thought he would end that splintering by creating a Ministry for Human Resources Development, but there is the office of the MoS to accommodate junior MPs.

Many experts have urged successive PMs to ensure a coordinated energy policy for India by having one cabinet minister for energy. Even Narendra Modi has not been able to ensure that. Thus we have different ministers for oil and gas, coal, renewables, nuclear and so on. The same with transportation and industry. Moreover, since more ministries means more secretaries to the government the bureaucracy too acquires a vested interest in the creation of multiple ministries.

The only amalgamation of ministries that has been done in recent times was when the Indian Foreign Service (IFS) succeeded in wresting a post back from their Indian Administrative Service (IAS) counterparts by integrating the ministry for overseas Indian affairs into the external affairs ministry. A “foreign travel” job of the IAS was taken back by the IFS!

In the end, ministers matter in a political system in which they bring not only their experience and political judgement to a job but also ensure dispersal of power within a political party. However, if all political power is centralised with the PM and CM, how does the size of a ministry matter, beyond its fiscal impact?