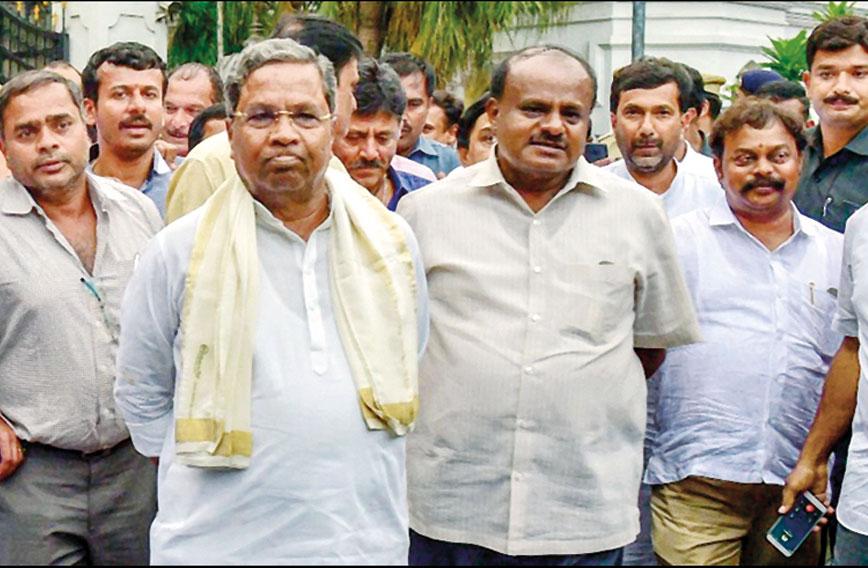 A few months ago I had to discontinue this column when I took up an assignment that did not give me the time to write. I am happy to resume this at the invitation of Rita and Umesh Anand.

The ambiguous results of elections to the Karnataka assembly, with no one political party securing a clear majority, have once again raised questions about the morality of ‘post-poll’ coalition formation. During the campaign itself some political commentators raised eyebrows at the prospect of H.D. Deve Gowda's  Janata Dal Secular (JDS) joining hands with the Bharatiya Janata Party (BJP). Prime Minister Narendra Modi has been criticised for praising Mr Gowda now after having spoken against him in 2014. Such innocent commentary is touching.

Consistency has never been a virtue in coalition formation the world over. In India the word ‘secular’ was often used to lend a moral edge to a coalition but no politician took these words too seriously. Coalitions, by definition, are an alliance of the willing and subject to constant flux. Coalition building is, in the end, more of a numbers game than a morality play.

Mr Modi’s praise for Mr Gowda during the Karnataka campaign as opposed to his criticism of the man in the past is not out of line. It is very much the kind of readjustment in thinking that politicians are required to do to enable them to form governments. After all, it is the very same Congress party that unseated Mr Gowda from prime ministership that rushed to secure the chief minister’s chair for his son.

There are scores of such examples of yesterday’s rivals being today’s allies. Consider the fact that in 1996 many in the Congress party refused to join hands with the DMK on the grounds that the Dravidian party had been supportive of the Tamil Tigers — “the killers of Rajiv Gandhi”. By 2004 the Congress was ready to form a government in New Delhi with the support of the DMK. The Left Front has remained an unrelenting critic of the ‘neo-liberal’ economics of Manmohan Singh and yet it is thanks to the support of the Left Front that Dr Singh became Prime Minister in 2004. By 2008 the Left Front had enough of Dr Singh and sought to pull the rug from under his feet, but the Congress party discovered that old betes noires Mulayam Singh Yadav and Amar Singh had their uses.

Politics is the art of the possible. Not everyone agonises about holding hands with political untouchables the way the CPI(M) politburo does. After months of internal debate the CPI (M) finally decided that allying with the Congress party in West Bengal while fighting it in Kerala was an acceptable tactic given larger strategic considerations.

It would seem that the only two political parties that can never be expected to be partners in a coalition government are the Congress and the BJP. But, wait a minute. Something short of that has happened. In 1991-92  P.V. Narasimha Rao survived as the head of a minority government thanks to the tacit support extended to him by the BJP’s Atal Bihari Vajpayee. None of Mr Rao’s ministers, including ‘diehard secularists’ like the late Arjun Singh, objected to this. As long as they could remain ministers and enjoy the perks of power in the Delhi Darbar why bother about who is helping keep the government in office.

The only interesting political question for 2019 is whether Prime Minister Modi and BJP's  party president Amit Shah have raised the bar for such tacit or explicit support of other political parties in case the BJP needs it. If the BJP falls short of a majority will there be enough number of MPs
from other political parties willing to support it? Managing this ‘untouchability’ factor and
ensuring that he remains acceptable to a wide cross-section of political opinion in the country is
the only challenge before Mr Modi as he moves towards 2019.

In Karnataka many had assumed that the BJP would reach out to Mr Gowda and form a coalition government. But the Congress beat the BJP and rushed to Mr Gowda. This does not mean that at a later date Mr Gowda may not favour an alliance with the BJP. It is a free for all. The Karnataka result has shown that neither the Congress nor even the BJP can ignore the egos of lesser parties. Everyone should be kept happy. Who knows whose friendship would come in handy at what point. The only political fact that seems clear is that the BJP is the dominant national political party today. All others, including the Congress, are regional parties. The question for 2019 will be whether a dominant national political party would form the government in Delhi or whether some sort of a coalition will once again come into being.

Many political analysts had assumed that the so-called ‘Era of Coalitions’, that began in 1989 with the V.P. Singh government had finally ended with Mr Modi’s decisive victory in 2014. That judgment may well be proved right if the BJP secures an absolute or near absolute majority in 2019. This cannot be ruled out. However, if the BJP falls short of a majority and India is once again back into the ‘era of coalitions’ one should expect to see strange bedfellows readjusting their pillows and getting comfortable with one another. A BJP coalition with a breakaway faction of the JDS in Karnataka, a CPI(M)-Congress coalition in West Bengal, a BJP-DMK alliance in Tamil Nadu, a BJP-YSR Congress alliance in Andhra Pradesh. Anything is possible. After all, in politics, as in modern social life, the idea of ‘friends with benefits’ has long taken root.

(Sanjaya Baru is a writer based in New Delhi.)