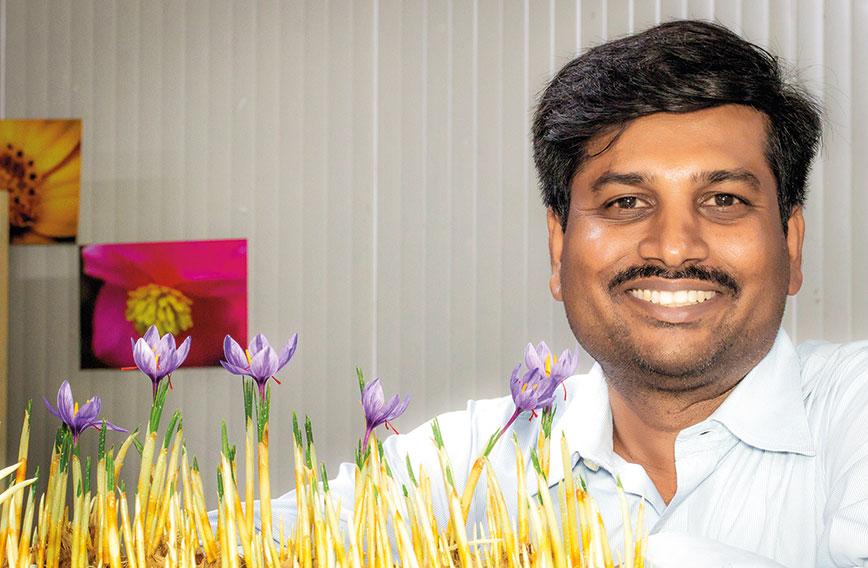 Girish Ramaswamy with his saffron grown in a controlled atmosphere

Saffron blooms in the South

FOR 39-year-old Girish Muchal Ramaswamy, a rose farmer in Vasupura village, November 11, 2021 was a day of great significance. As he stepped into his cold storage that day, an exciting new fragrance greeted him. Ramaswamy recognized the aroma. He realized saffron had finally bloomed in his cold storage.

After a year of toil, Ramaswamy’s dream had finally come true. He had become the first farmer in Karnataka to grow saffron, the most expensive spice in the world.

The best quality saffron is priced at Rs 2 lakh per kg. Lower quality produce costs a minimum of Rs 1.3 lakh per kg. Saffron is produced from the dried stigmas of the flowers of Crocus sativus, the biological name of the plant. The flowers are called saffron rose.

The general impression is that saffron cannot be grown outside a 25-km radius of Pampore in the Pulwama district of Jammu & Kashmir (J&K). The cool temperature of the state is best suited for this elusive flower. Ramaswamy disproved such notions by growing saffron in warm Karnataka, albeit in controlled conditions.

His farm at Vasupura is in Kudligi taluk, 85 km from Hospet, the capital of the newly formed Vijayanagara district.

Ramaswamy started Sri Rama Flora at the end of 2016, investing Rs 4.75 crore to grow roses under protected cultivation. On six acres he set up poly houses, cold rooms and allied infrastructure, even harvesting rain from his poly houses. This water, stored in a huge plastic-lined tank, was sufficient for irrigating his rose plants for six to eight months.

A successful rose farmer, Ramaswamy is general secretary of the Karnataka Small Flower Growers Association (KSFGA) and is director of the International Flower Auction, Bengaluru (IFAB).

His roses were marketed through IFAB. When the going was good, Sri Rama Flora’s turnover was `4-8 lakhs per month. The roses were sold mostly in the domestic market. For special days like Christmas, Valentine’s Day, Mother’s Day, the flowers were also exported.

But due to the pandemic his enterprise came to a standstill. Fruits and vegetables are considered essential commodities, but not flowers. The horticulture department officers advised Ramaswamy to prune his rose plants and stop production. He lost lakhs of rupees. When the pandemic continued he removed half his rose plants since he couldn’t afford to maintain his farm.

Sri Rama Flora has four cold storage rooms. Each one has a storage capacity of 6 x 4 x 4.5 metres with a volume of 108 cubic metres. Ramaswamy started wondering whether these rooms could be put to any productive use. He began trawling the internet intensively. It was then that he came across the work of Dr Ardalan Ghilavizadeh, a senior agricultural consultant in Iran, on growing saffron indoors.

This method of growing saffron in a controlled atmosphere is called aeroponics. It is a process of growing plants in an air or humidmist environment without using soil or any aggregate medium.

“That was a ray of hope,” recalls Ramaswamy. He studied the Iranian expert’s success. “One advantage I had is that I already had cold rooms, the main requirement. I didn’t have to invest any money in that. Secondly, since saffron is a 45-day crop, once normalcy returns I could raise saffron during the off-season for rose.”

“Another possibility was to grow saffron through vertical farming,” he says. Vertical farming is the practice of growing crops in vertically stacked layers, often in a controlled environment, to optimize plant growth, and without use of soil. You can get high yields from a small area. Also, he came to know that two brothers, Naveen and Praveen, had grown saffron in controlled conditions in Haryana.

Ramaswamy contacted the Iranian expert and the two brothers but couldn’t afford their consultation fees. So, once again, he turned to the internet. He started studying how to grow saffron in a controlled environment. His elder sister, Hamsaveni Kumar, deputy director in the Agriculture Department and his younger brother, Harish M.R., an assistant horticulture officer in the Horticulture Department provided vital information. Ramaswamy approached the Spices Board which also gave him a helping hand. So did Raichur Agriculture University.

He got 200 bulbs from Kashmir. Growing saffron in an artificial atmosphere requires utmost care and knowledge. First, the outer layer of the bulb has to be removed. Then it has to be treated with a fungicide and shade dried. Corm rot, a fungal disease, is a serious issue.

After treating his bulbs, Ramaswamy started growing them in his cold room. On September 30, he recalls, he ‘sowed’ the bulbs. If the temperature of the cold room is increased, humidity decreases,and vice versa. “We vary the physical parameters too so that plants feel it is day and night,” he says. LED lamps are lit from 6 am to 6 pm for plants to think it is day. Low temperature and high humidity are required. Flowers don’t bloom if the temperature goes above 18 degrees Celsius.

Plant nutrients are provided via foliar sprays. Ramaswamy recorded the growth of his saffron plants every five days by taking photos. Once in a while, he measured the sprouted flower stalk with a vernier caliper.

On the 43rd day, November 11, the first flower bloomed. “That was a moment of great joy for me. In fact, I never expected my experiment to be so successful. At  best, I thought I would get a half-bloomed flower that would fall soon,” says Ramaswamy.

According to media reports the saffron grown by the two Haryanvi brothers is of good quality. So a precedence exists of growing quality saffron in controlled conditions. As for costs, Ramaswamy says an investment of `30 lakh is needed to build a cold storage area which would grow one tonne of saffron bulbs. Peripherals like racks and artificial lighting would cost another Rs 3 lakh.