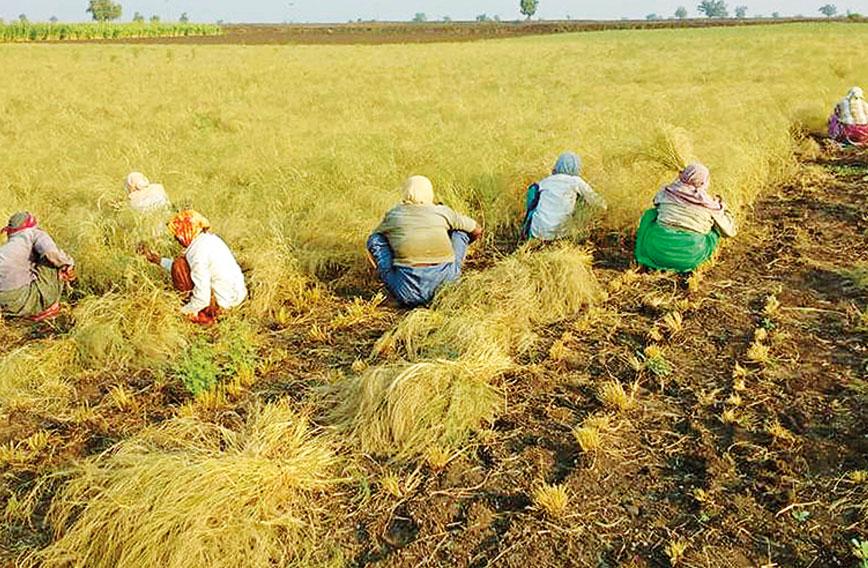 Teff being harvested on Patil's fields in Gadag

Four years ago, Dr N.S. Sudhakar, a professor, returned home to Mysore from Eritrea with a packet of teff seeds in his baggage. “This is a wonder cereal,” he thought. “We have to grow it in India.” 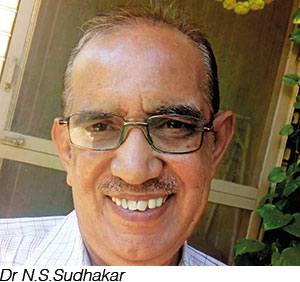 Dr Sudhakar came across teff, now considered a superfood, while teaching in Eritrea. The grain is cultivated mainly in Ethiopia and Eritrea, where it originated. It is a key crop. Flat pancakes called injera are made from teff, providing a livelihood to around 6.5 million farmers in Ethiopia. Two-thirds of the daily protein intake of Ethiopians comes from teff.

Injera resembles the south Indian dosa, except that it is bigger and thicker.

Since Dr Sudhakar was living alone, neighbours would regularly offer him half an injera. Dr Sudhakar would share his half-injera with another colleague. “If we ate that piece of injera at 2 pm with some stir-fried vegetables we wouldn’t feel hungry till 8 pm,” he recalls. “I turned into an injera lover very quickly.” His love for injera motivated him to study it more closely and he vowed to take this superfood to India.

At first, he says, he didn’t really like the taste of teff. It was a bit sour. But when Dr Sudhakar, a fish processing expert, started comparing the nutritive value of foods in Eritrea, injera was right on top. 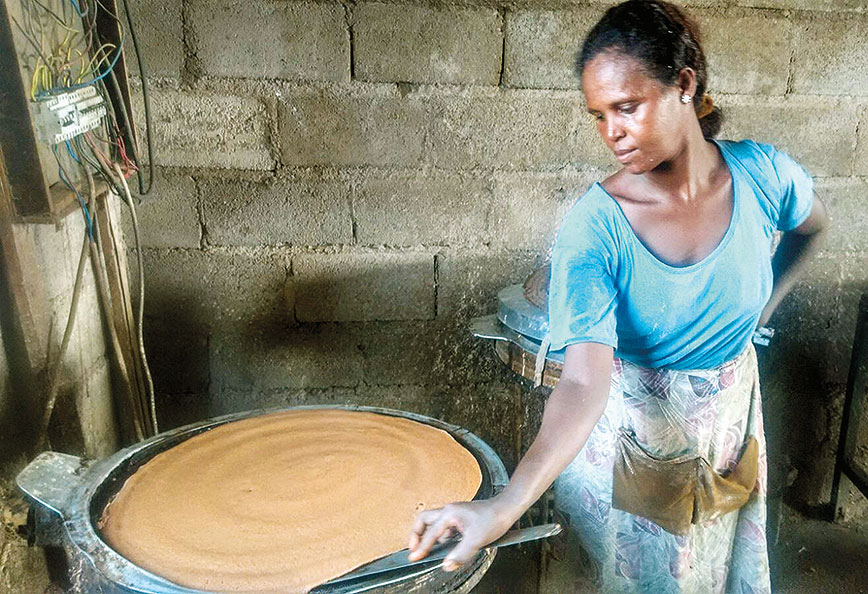 Each half-cup of injera has 127 calories, 5 gm of protein,  1 gm of fat, 25 gm of carbs, and nearly 4 gm of fibre. Like banana flour, teff is high in resistant starch, a type of fibre that may help support insulin sensitivity and increase satiety. Teff has caught global attention for being both gluten-free and a complex carbohydrate. No wonder it is now called a superfood.

Dr Sudhakar gave his seeds to some enthusiastic farmers but he didn’t hear from them again. He then worked with a Kannada farm magazine to write an in-depth story on teff and inform farmers about this grain. 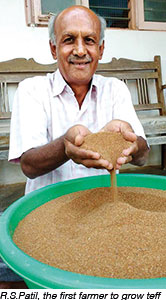 R.S. Patil, an organic farmer in Gadag, read his article with interest. He procured a 50-gm teff seed packet from the Central Food Technological Research Institute (CFTRI) in 2016 and finally managed to grow teff on three acres.

Patil is probably the first farmer to grow teff in south India or perhaps in the whole of India on such a scale. Dr Sudhakar was thrilled to hear of his success. “It’s a dream come true for me,” he says

For farmers, teff has an added attraction. The grain is also fodder for livestock and parts of it can be used as thatch material for huts. “The teff crop has many farmer-friendly qualities. It grows without fuss and is very drought-resistant,” says Patil.

Patil says the seeds he got from CFTRI were too few so he opted for transplanting and raised saplings, a method that ensures high survival and a good crop. Direct sowing is actually easier for farmers because it requires less labour and expense.

Teff requires around three months to harvest. The plants are then tied into small bundles and placed on a tarpaulin sheet. A tractor is made to run over the plants. That’s how Patil separated the grain from the hay. 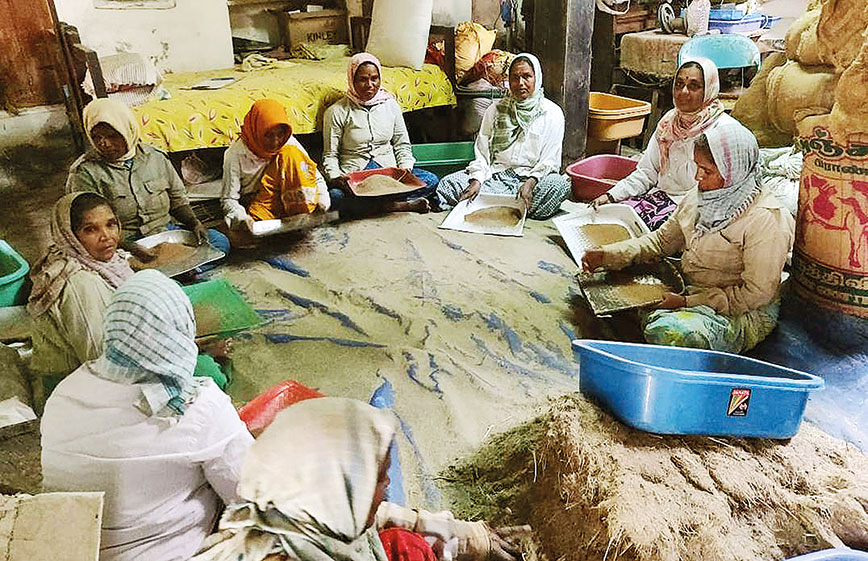 A team of women cleaning teff at Patil's farm

The biggest drawback of teff is that its grains are smaller than ragi or sand particles. “So cleaning teff is very labour-intensive and cumbersome. If there is rainfall during the harvest, the grains might fall on the ground and disappear. Even without rain, lodging is common,” explains Patil, who has hired a team of women to clean the crop.

Another problem is that some weeds look like teff. De-weeding has to be done carefully.

Teff is similar to millets which undergo a complex process of milling by machines. The problem with millets is that there aren’t any small milling machines which farmers themselves could use for processing. Here, teff has an advantage. It doesn’t require milling. The downside is that teff grains have to be cleaned by hand and that means employing an army of labourers.

Cleaned teff can be boiled and eaten like rice. Patil’s family has been experimenting with teff and making several dishes from it — rice, idli and injera. Everyone in the family likes these preparations. Patil cooked injera at the Desi Santhe weekly organic bazaar in Dharwad and a few visiting dignitaries tasted it.

In Ethiopia, teff is soaked and fermented for three days. Sampada, Patil’s wife, says the grain ferments faster here since the climate is warmer. “We soak it in the morning, grind it in the evening and make idli or dosa the next morning,” she says. Teff can be a good alternative to wheat. All bakery products made with wheat can be made with teff.

After hearing about Patil’s success, Sahadeva Yaragoppa, deputy director of agriculture in Gadag, visited his farm. “Teff has the potential to change cropping patterns in drought-prone Gadag district if the state government is interested,” he remarks. “Our millets require watering twice. Teff, I hope, can make do with one irrigation or rain at its crucial stage of crop bearing. The seeds sprout in three days and can be harvested in about three months. We can start growing it from late monsoon to the late kharif season. In other words, it can be cultivated almost round the year.”

Patil, an experienced farmer, says, “There are certain patches of land which hold water even during rain-scarce years. For teff, this moisture is enough.”

Sahadeva’s opinion is that the crop will grow nicely in sandy or well-drained red soil. “It would fare well and give better yield and grains of better colour and quality in red soil as compared to black cotton soil in which Patil has grown it,” he said. Patil says teff crop will succeed wherever farmers grow onions. “The crop is ideal for organic methods. In drought situations, when farmers can’t grow any other crop, teff can be grown,” said Sahadeva.

Hay, a byproduct of teff, makes good fodder, which Patil has already started using.  He says teff has a good rooting system and can be used to prevent soil erosion. It gives two to three ratoons too. Hay can be used for thatching earthen houses.

“There is no awareness about teff in India,” points out Dr Prasanna Reddy, an agricultural scientist who used to work in CFTRI in Mysore. He did some trials with teff. “If awareness is built, more farmers would be keen to grow it.” After he left, though, a year ago, further study of this crop stopped.

“Teff can be used in the same way we use ragi. We can make idli, upma, dosa and so on. The resistant starch in teff gets converted into glucose very slowly, making it better than wheat for diabetics. Of course, cleaning the grains after harvesting is a major problem. We, too, had to do it manually. The productivity of this crop is low.”

CFTRI, he says, had distributed about 50 kg of teff to scores of farmers for raising seeds. It was the early bird in identifying teff. But with the exception of a farmer in Andhra Pradesh, no one provided any feedback. The viability of teff starts decreasing after one year, according to Dr Reddy.

Patil’s experience of growing teff corresponds with Nayaz’s, a farmer who works on  Deejay Farms at Penugonda in Andhra Pradesh. He grew the crop in both the rabi and kharif seasons last year, procuring seeds from CFTRI.

“Ours is a pretty dry area with 300 to 400 mm rain,” he says. “Instead of direct sowing, we resorted to transplanting which gave us better results. One major advantage is that teff doesn’t require much attention. We have used only organic manure like cow dung. No pest or diseases attacked the crop.”

But when he took teff to sell in the market he couldn’t find buyers. No one had heard of it. Subsequently, he sold it in millet festivals and to a millet restaurant called Kaulige Millet Corner in Bengaluru. Disappointed, he has grown teff only on a small area this time.

Patil’s advice to farmers is to grow teff for their own consumption. “This will be good for their health instead of consuming food with pesticide residues. The crop requires little attention and it will gain in popularity. Organically grown teff should have good export potential. The government could extend financial support to farmers to grow, process and export teff,” he says.

There are two kinds of teff in Eritrea and Ethiopia, brown and white. While the brown variety costs Rs 150 per kg, the white is priced at Rs 200. It is a staple which people eat every day.

“Eritreans are very hardworking,” recalls Dr Sudhakar, “Joining the army is mandatory in their country. People are very well-built. They are guerilla war experts. Their ability to construct roads in difficult hilly regions is unmatched. No other nation can match their physique and energy. This energy they derive from teff."

“Lifestyle diseases like diabetes, high blood pressure and heart disease are much less there. People who are over 70 look much younger. Teff has 10 percent of dietary fibre. Those who eat teff don’t get heart disease or diseases of the digestive tract.”

Keenly interested in nutrition, Dr Sudhakar believes teff could play a role in combating malnutrition among pregnant mothers and children. “It is gluten-free, has important nutrients and minerals that are only available in meat. Fermenting makes it an important cereal.”

But farmers will grow teff only if they get a good price. In the international market, teff is priced at $5-6 for a kg. Patil has a stock of clean grains and flour for those who are interested.

Studies on teff’s nutritive value and its suitability as a crop in India could be done. It might turn out to be another life-saver crop for poor farmers in drought-prone areas.