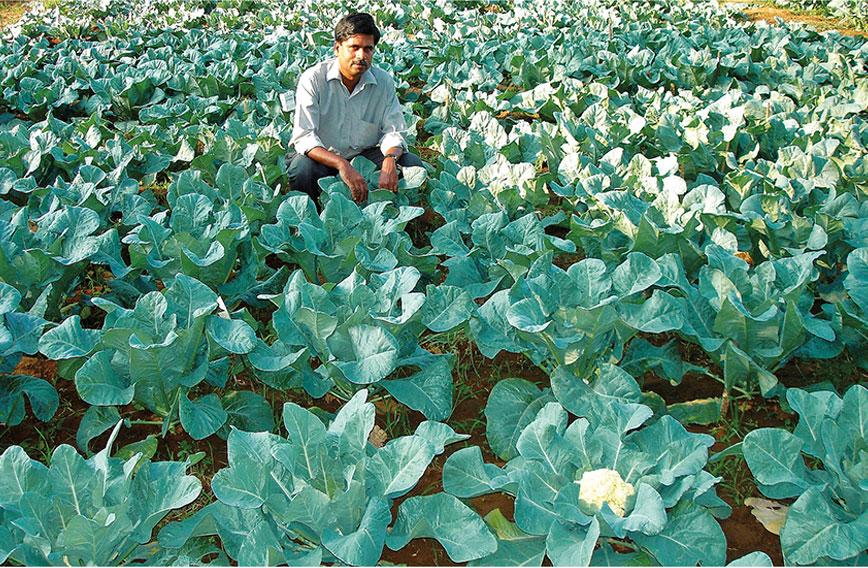 Mohammad Kutty of Thoppil Thodi in Pazhayannur panchayat of Thrissur district grows vegetables commercially for sale. This year, he feels like an achiever. For the first time in his life he is eating cauliflower which he has grown on his own farm.

“Since the past one month, cauliflower curry is a regular dish at home. We eat it with chapati. The taste is really good. Maybe because it’s farm fresh. Generally, we buy such winter vegetables when they are five or six days old,” he says.

Shivaprakash Paleppady, a farmer in Kasaragod district is also feeling great. He planted two rows of winter vegetables — cabbage and cauliflower — and both have grown well. The vegetables were a bit small  but he could cultivate them without any chemical pesticides. “The size was medium but the taste was notably superior,” was his wife Geetha’s assessment. Shivaprakash has decided to grow cauliflower and cabbage next year too and try his hand at growing carrots as well.

In Kerala, winter vegetables have so far been bought from other states or grown in small quantities in high ranges like Kandalur and Vattavada. Because of the state’s warm climate, it was believed that such vegetables wouldn’t grow. But the Kerala Agriculture University (KAU) changed all that. About a decade ago scientists started experimenting with growing winter vegetables in a warmer climate. They succeeded and spread their knowhow across the state.

The best part is that in the health conscious state of Kerala, winter vegetables are being grown with minimal use of chemical fertilisers or pesticides. In homesteads, farmers use bio-inputs to check disease.

Ranjit and his friend Sinoj of Mala in Thrissur are commercial vegetable growers who produce a range of vegetables throughout the year. Last year they cultivated cabbage and cauliflower on a commercial scale. Sunil Kumar, Kerala's  Minister for Agriculture, harvested Sinoj’s team first winter vegetable crop. Sinoj couldn’t get land on lease this year but his friend, Ranjit, grew both vegetables on one acre. 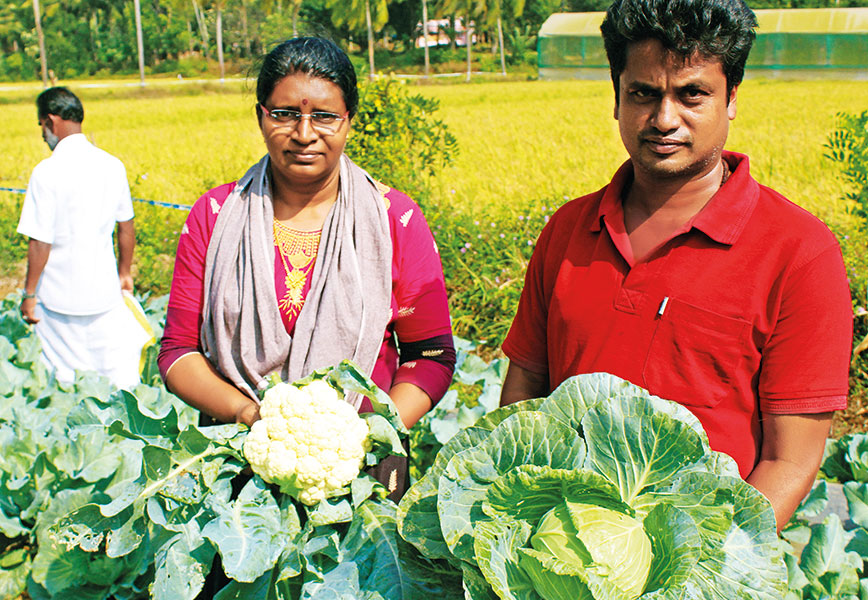 “The climate has been just right,” says Ranjit. “If it rains, we will land in trouble. Hundreds of households and commercial cultivators now have the confidence to grow winter vegetables.” He said most cultivators were using neem-based sprays to prevent insect attacks. A little chemical fertiliser was sometimes used.

When Dr C. Narayana Kutty, Professor, Agriculture Research Station (ARS) at Mannuthy in Thrissur insisted that winter vegetables could grow in Kerala, his opinion was treated with utter disdain. Dr Kutty’s optimism came from his experiences at the Indian Agriculture Research Institute (IARI) in Delhi, 15 years ago. Winter vegetables, like cabbage and cauliflower, were being grown on-campus successfully in 40 degrees Celsius. Kutty thought, why can’t we then grow these vegetables in Kerala’s 35-38 degrees Celsius?

After joining KAU, he suggested they experiment with growing winter vegetables. These vegetables won’t grow in Kerala, he was told. We can just buy them from neighbouring states.

But Dr Kutty persisted. Initially, he found it difficult to get cabbage seeds which at Rs 40,000 per kg were expensive. Finally, a person he knew in a seed company gave him some seeds. In 2004-05, he began trials amidst a lot of criticism. He started growing winter vegetables in the backyardof ARS so that if his experiment failed, he wouldn’t be publicly ridiculed.

But, wherever the sun shone on his vegetable patch, his crop of cabbages and cauliflowers bloomed. Dr Kutty happily showed these to his director of research who gave him the green signal to go ahead with his experiments.

Dr Kutty went to Israel in 2006 for training in vegetable seed production. “No farmer is given seeds there. The seedling nursery industry is so advanced that farmers order customised seedlings like ‘plant with five leaves’, or ‘seedlings of four-inch height.’ They were earning a huge income by exporting seedlings to countries like Russia,” remarked Dr Kutty.

He soon hit another roadblock. Seeds of winter vegetables were small, expensive and prone to soil born fungi attacks.  Farmers would find it hard to raise seeds for cabbage and cauliflower. Professional seedling production in pro-trays in the nursery was the only solution, he decided.KAU has a standardised method for raising nursery level seedlings.

Kutty’s successful trials with winter vegetable cultivation hit the headlines. The Vegetable and Fruit Promotion Council Kerala (VFPCK) got interested. They began producing seedlings in a big way. When the agriculture minister started harvesting big cabbages and cauliflower in his farm, everyone got interested.

At that time, not many knew of pro-trays or vermiculite, a natural mineral used in potting medium to enhance plant growth. Dr Kutty put in a lot of effort to procure pro-trays for further trials. These issues got resolved but the next question was whether farmers would buy the seedlings.

Coincidentally, at this time the Kerala government introduced a series of grow bag farming schemes to increase vegetable production in the state. Seedlings would be needed for the grow bags. Suddenly there was demand for seedlings.

Today pro-tray seedling production technology has spread widely. For example, Joseph U. J., a farmer from Mappalachery near Kanhangad, who dropped out of school, produces thousands of seedlings which he sells on the roadside!

Out of half a dozen winter vegetables, cabbage and cauliflower emerged as the most popular, especially cauliflower. Apart from KAU, the Department of Agriculture and VFPCK are producing seedlings on a mass scale. Recently, seedling production has started commercially at farmers’ level with support from these agencies. 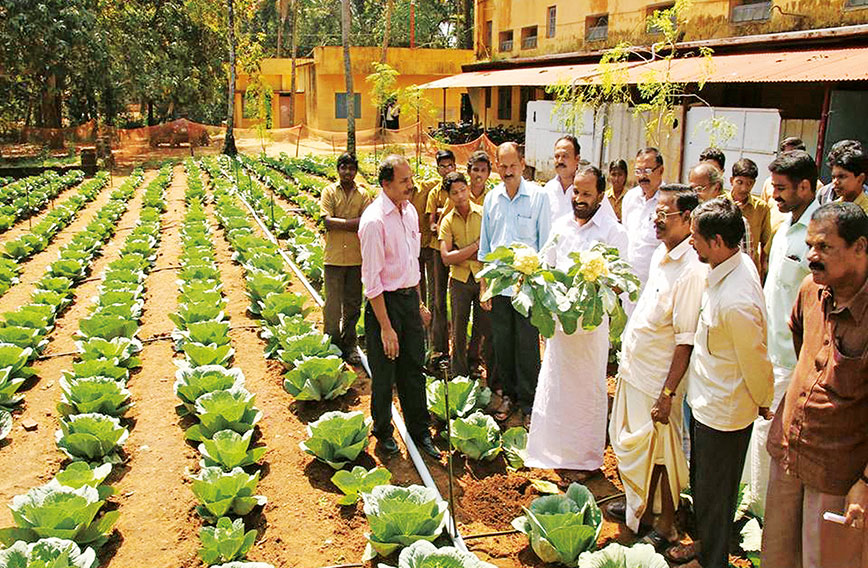 Weeks before winter starts, Krishi Bhavans and agriculture departments in all districts begin producing winter vegetable seedlings. KAU has identified about 30 plus cultivars of cabbage and cauliflower that are tropical types and have proven successful in Kerala. Generally, seedlings of about four to five varieties are mass produced.

Commercial cultivation of these vegetables, in small amounts, has spread to almost all districts. “Cultivation picked up when grow bags became popular in the last four to five years. In remote Panaththadi panchayat at least four to five acres of winter vegetables are being commercially cultivated. In Kanhangad block alone around 500 households are growing winter vegetables,” said Sajini, Deputy Director, Agriculture, Kasaragod.

Both KAU and the Agriculture Department sell seedlings at Rs 3 apiece. In Thrissur, the Perumatti Agriculture Society produced five lakh seedlings and sold each for Rs 1. Kasaragod has six centres that sell seedlings. Easy availability of plants has given a big boost to winter vegetable farming.

Currently winter vegetables are bought by local consumers. Each cabbage or cauliflower is sold, depending on its size, for Rs 5-40 apiece.

“Since we have an eco-shop, we can sell cabbage and cauliflower at a remunerative price. Regular shops won't be able to sell at this price. If more farmers cultivate such vegetables, marketing will become tough,” remarked Joseph U.J. who is cultivating winter vegetables for the fourth year. 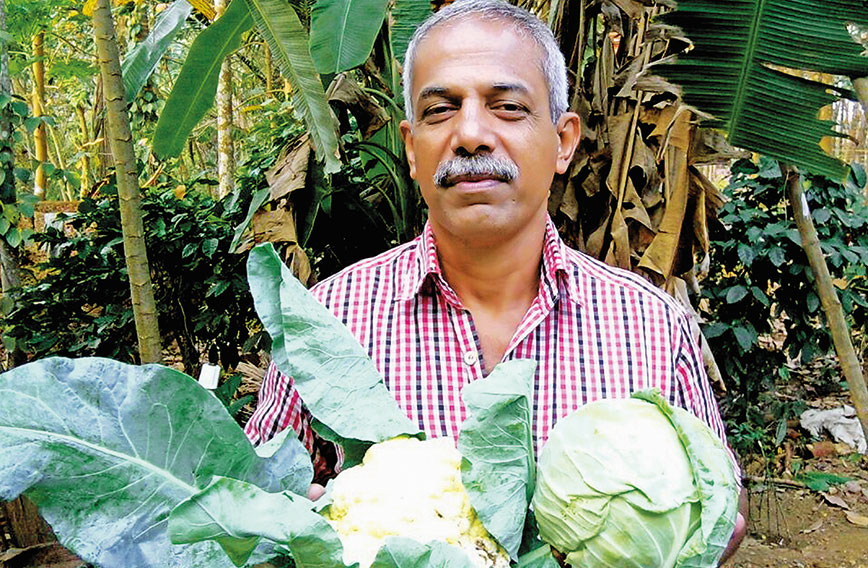 Joseph U.J. with a cauliflower and cabbage from his farm

Last year Sinoj and his friends sold cabbages and cauliflowers for Rs 60 each. This year Ranjit had to settle for Rs 25 to 40 per kg. “Cabbage is now available at a cheap price. We could sell ours at a premium because they are grown without chemicals. If we had a variety of vegetables to offer to traders, we would earn more.”

This is the second year farmers of Pazhayannur Krishi Bhavan are cultivating winter vegetables. “This time we had a cold winter, and therefore a good crop. Sixteen farmers have cultivated these crops this year.  Our cauliflowers weighed 1.25 kg each and the cabbages around one kg each. If we cultivate these vegetables on 10-15 acres, we can sell the crop for a good price. Selling more than that would be tough,” said Joseph John Therattil, agriculture officer.

Commercial farmers are keen to grow these vegetables because they are off-season and short-duration crops in Kerala. They can’t grow any other vegetables during this period.  Cabbage requires 80-85 days to grow and cauliflower can be harvested in 75 days. But apprehension of competition from the usual crops prevents farmers from devoting more land to winter vegetables.

“No commercial farmer will grow these on more than one acre. The simple reason is that winter vegetables grow only in winter,” says Dr Kutty. “For farmers of other states, winter vegetables are a peak crop and sold here at a cheap rate. Their labour rates are lower too.”

The reason local people like to buy local winter vegetables is safety. Farmers point out their vegetables are mostly free from chemicals. Cabbage and cauliflower are infamous in Kerala for high pesticide content.

Mohammad Kutty who is growing cabbage and cauliflower on one acre each says he does resort to using a little chemical pesticide at an early stage of cultivation. “Commercial farming will require mild chemical pesticides because of the inability to give attention to all plants,” he says.

The reason why Kerala can grow winter vegetables with very little use of chemicals is because farmers grow just one crop. “Enemy pests can’t continue their life cycle through the year as in regular cabbage growing areas. Growing just one crop is actually a boon from the crop management and health safety point of view. We don’t have to worry much about pests,” says Dr Kutty.

With winter vegetables being grown in Kerala, dependence on buying them from other states has declined. In the next five years, winter vegetable production will be a regular feature in most Kerala homesteads.