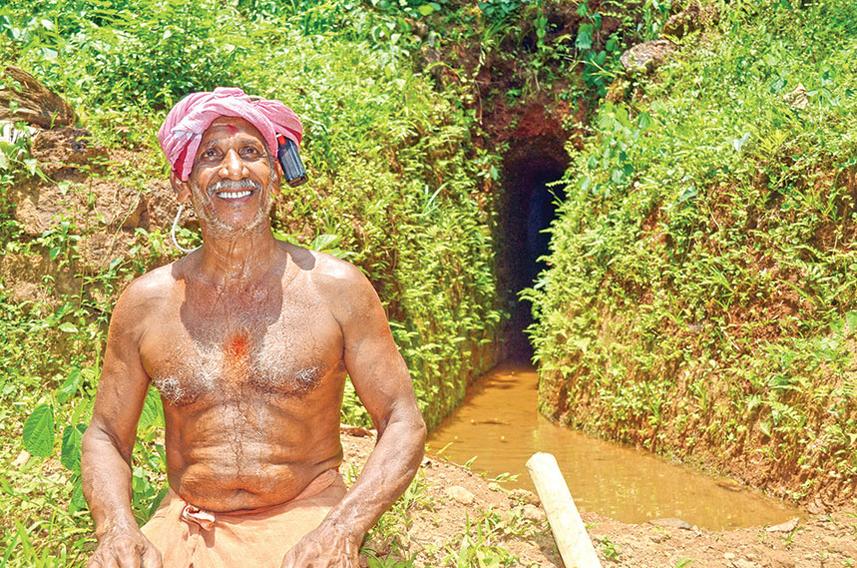 The diggers of suranga are vanishing in India

Chaliya Kunhambu, 64, is standing on a road, 30 km away from Kasargod, the district’s headquarters. If he could connect all the surangas he has dug in 50 years, he would reach Kasargod walking underground all the way!

Imagine digging a cave in hard laterite soil, that too for 45 km. It’s a record unlikely to be broken — because India has probably less than half-a-dozen suranga diggers left.

A suranga is a traditional water harvesting structure of Kasargod district — a man-made cave for water that can be dug only in a particular type of laterite soil that’s not very hard and not too soft.

Generally, a suranga is dug across a hill with a gentle gradient. When the ‘cave’ intercepts the water table, water starts flowing into it. You get pure water round the year, and you don’t need a booster pump.

The biggest advantage of a suranga is that it is possible to dig it in the upper reaches of a hill where no other water harvesting structure like a tank or an open well is possible or affordable. A poor farm labourer with some courage and commonsense can dig a suranga in a couple of months, working one or two hours in the evening — without affecting his livelihood elsewhere. 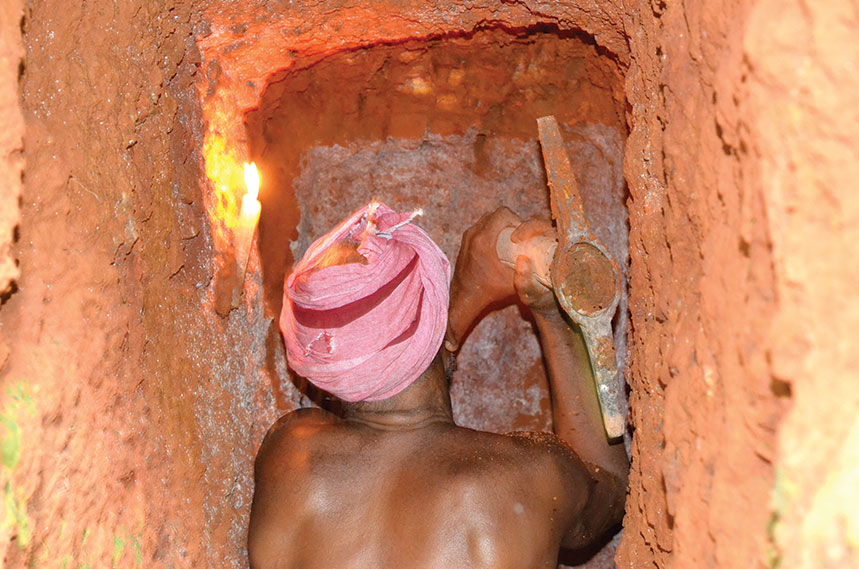 Not much is known about the history of the suranga in Kasargod. It resembles the qanats of Iran and Afghanistan, and is similar to the karez. Very few surangas are dug today. Kasargod has a few. But suranga diggers like Kunhambu are a rarity. Knowledge of this traditional water structure is vanishing fast.

Kunhambu was 14 when he was initiated into suranga work by Kannan, his 72-year-old uncle. The boy liked the work and understood its finer aspects in two years. Since then, Kunhambu has been digging surangas without a break.

Generally, depending on length, surangas are dug by a team of two or four people on contract. For digging upto 40-50 kolus, two people suffice. But, as the length increases, work becomes more labour-intensive since the soil that has been dug out has to be removed. It is emptied into a rubber basket and pulled out from an opening in the suranga.

In a day, Kunhambu and his assistant are able to dig about three kolus. “On an average we dig over two kolus per day. We work long hours, from 8.30 am to 6.30 pm. If the soil is very hard we have to be content with digging only one kolu a day,” he says.

Suranga digging is done after the monsoon recedes, from mid-October until May. But Kunhambu digs surangas in the rainy season too if the hill consists of very hard laterite soil and its walls are unlikely to collapse.

At times he strikes water at just 10-15 kolu. The farthest he recalls having dug is 230 kolu — a neat 575 feet. His village, erstwhile Bedadka (now bifurcated into two villages), has an estimated 3,000 surangas, according to Kunhambu. He probably dug 500 of them.

Using his vast experience, Kunhambu is now divining water for dug wells and even borewells. He is summoned to various spots for water divining. But he doesn’t use the implements that other water diviners use such as the Y fork or pendulum. “In the past I used to take a water-level indicator to measure the slope. Now, I go empty-handed,” he says. Thanks to his accuracy in water divining and suranga digging, his failure rate in surangas, he says, is minimal.

Half a century ago, when Kunhambu joined this field of work, there were many suranga digging teams in these areas. “There was a team from Paika, one from Madhur and another team of Muslims. They would go from house to house, asking whether their services were required. My village itself had around 20-25 teams then,” he recalls.

But the rise of the borewell led to the downfall of the suranga. Only around 25 surangas have been dug in the past several years. Balakrishnan, 55, a neighbour who used to dig surangas, has quit the work. Out of about 20 people who learnt the skills by assisting him, only one or two are continuing. “It’s hard work and doesn’t suit everyone. You need patience, boldness and judgement. Some of the young diggers who trained under me have become drivers or run small businesses,” he says. 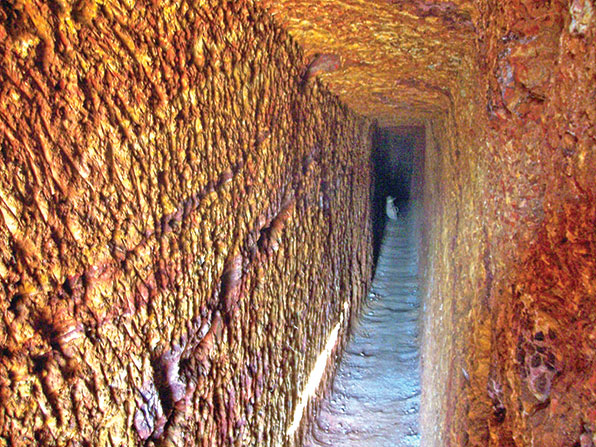 Suranga digging is hard, solitary work and risky. There is the danger of the suranga walls collapsing during digging. There are also incidents of diggers getting entangled inside the cave and deaths too, though rare.

“One has to be very alert to avoid danger,” explains Kunhambu. “It is an intricate job with many dos and don’ts. In about a couple of metres of actual digging area, soil doesn’t collapse as it has support. The precursor of any soil-slide, if you are very attentive, is the distinct sound of a mass of soil breaking nearby.”

Kunhambu always returns to see the old surangas he has dug. When he digs long surangas, he reduces their height by digging the last few metres in a sitting position. He has, to his credit, completed many surangas other diggers have abandoned halfway due to fear or a dispute.

Bandadka and Kuththikol, two adjacent villages, are a classic model for use of surangas today. “No other water harvesting structure gives you this clean perennial running water,” says Kunhambu. The water that oozes from the interior of the hill through the suranga is directed outside in a pipe and collected in a tank. In fact, it is a 24/7 supply of clean drinking water without any pump dependent on fuel.

For hundreds of households, the suranga is the only potable water source. In these two villages, suranga water is also used for irrigating a few homestead trees like coconut, banana and so on.

“Another notable feature of our villages is that we have open wells with a suranga inside,” points out Ratheesh, Kunhambu’s son.

When the owner of a well feels that the water in it is inadequate, he gets a suranga dug from the inside wall of the well. Such surangas are generally dug in a sitting position to save labour. In fact, this is an even more labour-intensive task than digging a hillside since the soil has to be lifted out of the well.

“Surface water has dried up. Open wells dry up fast too. Our village boasted of thousands of traditional surangas but now borewells outnumber them,” he says regretfully.

Kunhambu, a God-fearing man, has dynamism, optimism and vision. Wherever he digs surangas, he keeps the welfare of the landowner in mind too. He has never abandoned any suranga halfway because of a dispute.

“When I dig some surangas, I can’t go very far because of poisonous gases. You can’t get enough oxygen. So I have to stop work. But there are instances when I can resume work the next year and finish it.”

Though Kunhambu deserves a national award, he has not achieved recognition even at state level. The local media began writing about him after a team from the UK that was conducting research on surangas met him three years ago.

Dr Darren Crook and Sudhir Tripathi, both from the University of Hertfordshire, spent an entire day interviewing Kunhambu in 2013. Before leaving, they asked if he would be willing to go to the UK. He quipped: “If you take care of my visa, travel and all other expenses, why not?”

The visit by the UK study team roused interest among Malayalam journalists. In the past two years, a few reports on Kunhambu’s saga of suranga digging have seen the light of day in Kerala dailies.

This led to a couple of milestones for Kunhambu. Bidar in Karnataka has many silted karezes. The local community was not sure whether they could be revived and how to go about it. There was no expert who understood the structures.

V. Govindan Kutty, an assistant professor of geology from Palakkad and a researcher, had visited Bidar and studied these karezes. He came to know about Kunhambu. On his suggestion, the district administration invited Kunhambu to Bidar.

Govindan Kutty took Kunhambu to a seminar in Bidar on “Glory that was Bidar” to share his experiences as a suranga practitioner. Kunhambu, after studying the structures in Bidar, presented his plans to revive the karezes. Govindan Kutty translated his presentation.

Subsequently, with the help of an NGO, the local administration has successfully begun reviving the karezes.

“Kunhambu Ettan (brother) encouraged us and gave confidence to the district administration, researchers and local labour that the karez or suranga-bavi of Bidar can be restored. He also guided and supervised the labour on-site in cleaning the distribution channel. This led to smooth execution of the subsequent debris removal work,” says Govindan Kutty.

Vinay Malge, convener of Team Yuva that actively participated in reviving the suranga-bavi, was very impressed by Kunhambu. “The opening from which he started the excavation of the Bidar karez was small and congested. He dug the whole channel literally sitting on his knees,” recalls Vinay. “His passion was infectious. He hummed songs while working. He was absolutely fearless inside the tunnel. In that narrow and low tunnel where it was even difficult to turn around he worked coolly like a snake lurking around.”

Kasargod has an estimated 8,000 surangas. Many of them continue to quench the thirst of poor families and parched lands. Kunhambu, a historic achiever, is probably the last authority who can speak on this vanishing traditional skill of digging surangas. It is time his achievement is recognised, and his experiences and skills are documented in multimedia format.