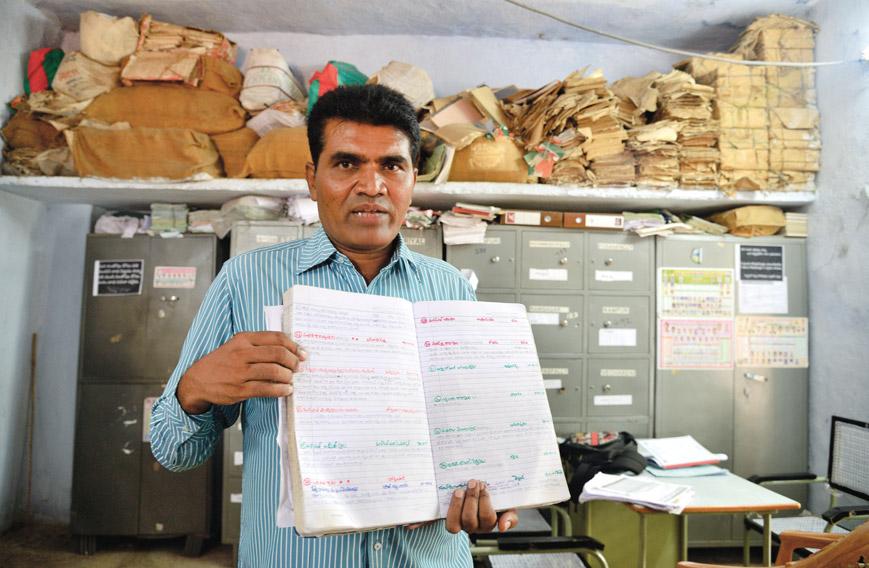 In Warangal district of Telangana, Beeram Ramulu uses the Right to Information law to access government records on farmer suicides. The issue is close to home. Ramulu is a farmer himself. He has become an activist fighting for farmer rights and helping families affected by farmer suicides.

He has been maintaining a register of farmer suicides in Warangal district since 2008. His number is much higher than official records due to his diligence. There is much that the State can do but doesn’t.

However, until then Ramulu’s assistance to the people of Warangal is invaluable. He is helping families cope with the challenges they face after these personal tragedies. With civil rights groups like Caring Citizens’ Collective, he has been pivotal in spreading awareness about the government’s support schemes and helping farmers transit to more sustainable farming practices.

Ramulu is slightly better off than other farmers — he is educated, has four acres and is more aware of the implications of farmer suicides. But, most important, being a farmer himself, he understands what needs to be done and is doing it.

Below is a piece by Umesh Anand and Harsha Sai that appeared in Civil Society's September-October 2016 edition. Read on.

It is tough being a farmer in Telangana’s Warangal district. Water is difficult to come by. The soil lacks in fertility. Middlemen and moneylenders reign supreme. If a couple of crops fail, chances are that you will be staring at a deadend with no one to go to. Banks won’t touch a farmer in trouble. The government doesn’t have the sensitivity to pick up distress signals.

Beeram Ramulu, 48, knows how challenging life can be for Warangal’s farmers because he is one himself. He is luckier than others because he has four acres, a family support base, an education and some money. He is also  more savvy because he has lived and worked in Hyderabad. But if the second tube-well he has dug on his land were to fail, he would be in a spot. It is as tricky as that in Warangal. A tube-well fails, the rains don’t come, a crop gets hit by pests — and just like that one’s world goes topsy-turvy.

Most farmers suffer quietly. Several thousands have, in desperation, taken their own lives over the years. But Ramulu is one farmer who has decided to do his bit to find a way out by campaigning for farmers’ rights and highlighting their problems.

It is not easy for a farmer to also be an activist. Ramulu works hard at it with personal conviction and perseverance. He moves around a lot in Warangal district and uses the right to information (RTI) law to access government records. He has also linked up with civil rights groups.

Warangal’s farmers suffer because of their choice of crops and their overuse of chemical fertilisers and pesticides. Cotton brings in money if a crop is successful. But it is not suitable for a rain-deficient area. It also needs to be protected from pests. The use of chemicals has depleted Warangal’s soil. It has driven up the indebtedness of farmers who are forced to borrow to pay for the rising cost of pouring more and more fertilisers and pesticides into their fields.

Ramulu tries to convince farmers not to plant cotton because of the many challenges associated with its cultivation in Warangal. He suggests they grow maize and pulses instead as those crops require less water. He also campaigns for organic inputs or at least moderation in the use of pesticides and fertilisers.

Farmers mostly don’t know the way out of the difficulties they find themselves in. They need guidance and role models to make a transition to more sustainable practices. Very often they don’t even know what the government has on offer in terms of support schemes and seeds. Ramulu helps them make such connections.

It is not easy. For all the awareness he has Ramulu too seems to be in transition. On his four acres, he grows wheat and turmeric. A part of his land is set aside for organic practices. If his second tube-well were to fail, he would be in a bind. So, it isn’t as though he has his farm sorted out. 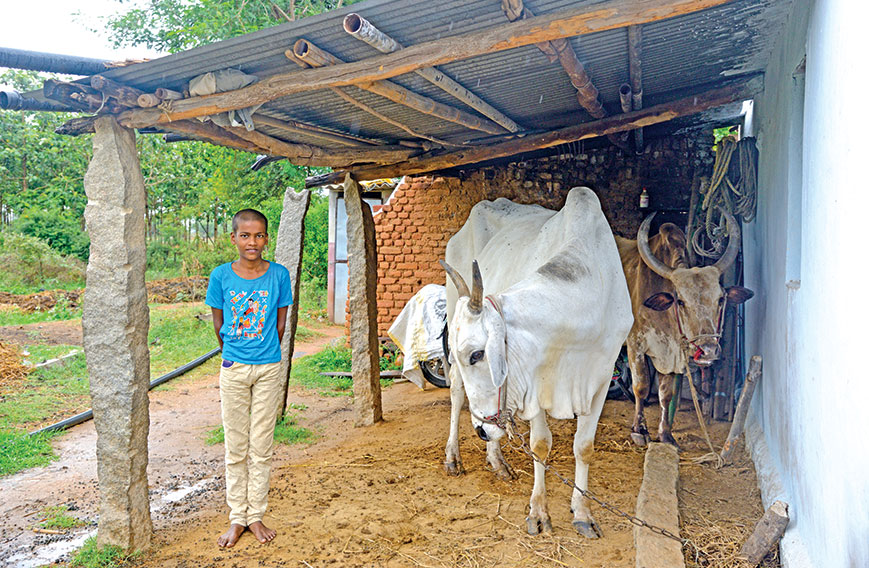 Children invariably drop out of school when their father kills himself

After finishing school and acquiring some training as a technician, Ramulu got himself a job in Hyderabad. In 1994 he got married and returned to his family’s farm at Thimmapur village in the Hanamkonda mandal.

“I enjoy farming and I dislike working under others, as I had to while doing a job in Hyderabad. My father worked on the farm from childhood. My grandmother was known in our village for her agricultural skills. She has been an inspiration to the other farmers. My family had 14 acres out of which us four brothers were given two acres each. The remaining six acres is still in the family’s name and used for grazing. Apart from the two acres I was given, I purchased two more acres and now I have four acres,” says Ramulu.

Ramulu says around 2003 he was influenced by the human rights activist, Burra Ramulu. A few years later, he came in contact with the Caring Citizens’ Collective (CCC) and began making a record of farmer suicides and helping the families of those who had died.

The mandate of CCC is to alleviate the distress of people affected by the deepening crisis in agriculture. In CCC’s view it is not just farmers who are suffering, but also those in traditional professions like artisans, weavers, carpenters and so on. Human rights initiatives need to be combined with organised caring efforts to meet the needs of families in ways that go beyond mere charity.

CCC seeks to be a platform for people from all walks of life. It reaches out through volunteers to follow up on cases of starvation deaths and suicides by farmers and weavers so as to help families cope with the challenges they face after these personal tragedies.

Apart from helping families in distress, Ramulu also wanted to do something to prevent farmers from committing suicide. He joined the Raitu Swaraja Vedika in the year 2008. It became the Telangana Raitu Joint Action Committee (TRJAC) in 2014 after Telangana State was formed.

“I can say I have directly helped 130 farmer families in the past four years. There are thousands of others who have been helped by the awareness that our organisation creates,” says Ramulu. “If we know a farmer is getting into losses, we provide advice on what to grow, give him subsidised seeds and also try to connect him to banks. I have picked Cherial village, which has recorded the highest number of farmer suicides, and spread awareness amongst the farmers there about the dangers of growing cotton.”

“The government provides subsidised seeds. We help the farmers in getting access to them because half of them don’t know about the procedure or from where to collect the seeds. We have been doing this as an awareness drive over the past year,” explains Ramulu.

“We are not affiliated with any of the political parties or leaders. Our main aim is to work for the farmer’s benefit. We have succeeded in helping farmers get their input subsidy and better market facilities.”

Ramulu has been personally maintaining a register of farmer suicides in Warangal district since 2008. He has a record of 4,000 deaths and says that he has visited 1,800 families. He focuses on the families that haven’t got compensation because they need someone to speak for them.

His applications under RTI to the office of the Superintendent of Police have shown that officially there have been around 5,000 suicides between 1994 and 2008.

Ramulu believes there have been many more suicides and that the authorities have been living in denial because they don’t want to own the crisis that Warangal district is experiencing.

There is also the question of compensation. Of the 5,000 cases officially recognised as suicides, compensation has been given to only 900 and 4,100 are awaiting relief. He has filed a case with the Lokayukta to help 1,200 families get compensation. Of these 400 are close to being decided.

Asked what he thinks the government should do for farmers, Ramulu says it is important to ensure that they get access to loans from banks. Farmers who take land on lease deserve to be recognised and given identity cards. There should be a fair price for crops. Crop insurance, he says, has not been working and the government should revisit this scheme.

The farmers who commit suicide invariably leave their families adrift. We went to the home of Kommera Praveen, who at 35, had hanged himself from a tree in his fields.

The cotton Praveen planted, taking loans amounting to Rs 3.5 lakh, failed in two successive years. He was paying 24 percent annual interest on the loans. It was all too much for him.

The family has eight acres, which is a lot. But with Praveen gone so suddenly, his wife and parents don’t know what to do. His daughter and son go to school. The family doesn’t know how it will make ends meet.

“We never approached banks as we were ignorant. Praveen would take care of the farming and finances and he too never approached banks. No one from the government came to us. We lack information about taking loans from the government banks,” says Praveen’s widow, Narkula Sujatha, who is just 28 and doesn’t know how to plan her life without her husband.

It is in circumstances such as these that Ramulu plays an invaluable role. He is invariably the only support that the family has. 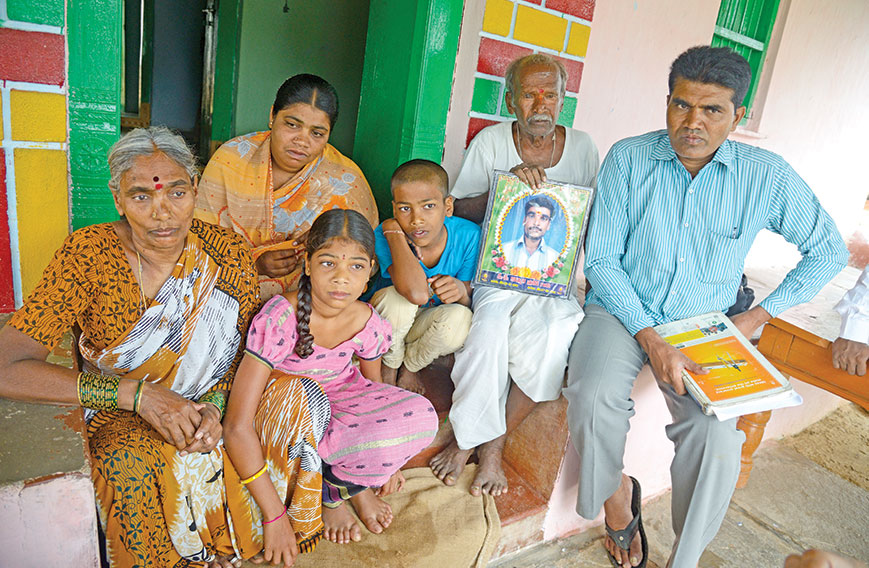 Beeram Ramulu with the family of Kommera Praveen who committed suicide