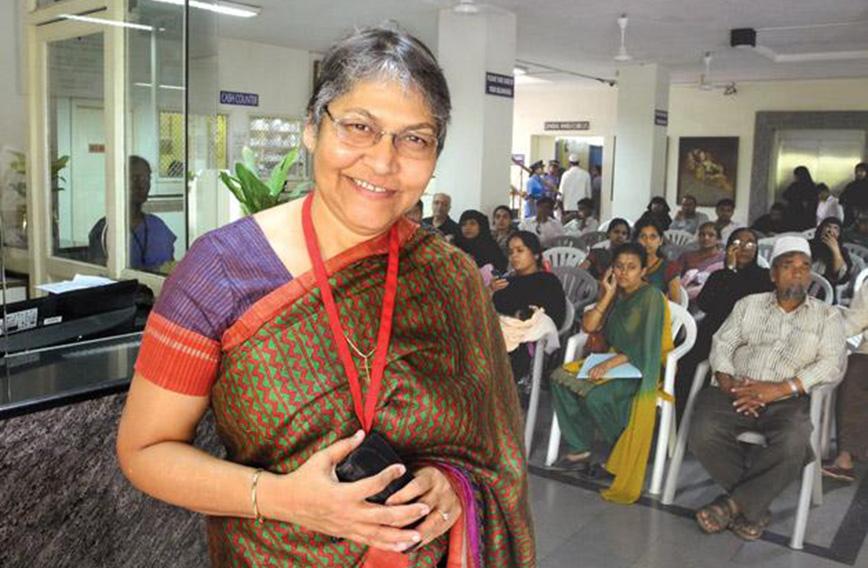 Evita Fernandez is literally married to her profession — she chose to remain single so that she could focus on her work. By the time she was eight, she knew she wanted to be a doctor. At 16, she decided she would dedicate her life to caring for pregnant women.

Fernandez inherited this passion for medicine from her doctor parents who ran a modest two-bed nursing home in Hyderabad. Fernandez expanded the nursing home to a 225-bed hospital. Today, Fernandez Hospital is at five locations in Hyderabad. She also devotes her time to a training programme for nurses and midwives.

Fernandez has been immensely successful, but she doesn’t just run the hospitals for profit. Her ethical foundation is also an inheritance from her parents. At her hospitals, patients are not given unnecessary medicines or treatments.

Fernandez has been known for making her patients feel special and safe. She strongly believes in the need to make good quality healthcare accessible to all. HIV-positive women are treated for free. Patients who can’t pay are not turned away.

Fernandez’s rare brand of medical care goes beyond good quality treatment. It is ultimately defined by empathy for her patients.

The warmth of Dr Evita Fernandez’s sunny smile has radiated to thousands of newborn babies. Ask any mother who has delivered her baby under Dr Fernandez’s care and she will tell you she felt special and safe.

“Be kinder than necessary because everyone you meet is fighting some kind of battle,” says a message on a pinup board in Dr Fernandez’s office, mirroring her philosophy.

Fernandez Hospital in Hyderabad is her battleground. Through her untiring efforts she has shown how a private healthcare facility can provide high quality service to women from all strata of society and contribute to public health as well.

Dr Fernandez says childbirth is the most beautiful and magical happening in the world and she practices medicine to keep it that way.

She  was eight years old when she decided she must become a doctor. At 16, she was sure all she wanted to do was to look after pregnant women who bring babies into this world. “That was the only subject I wanted to study even in college though for some reason I didn’t get my highest marks in obstetrics!” she grins.

She also chose to remain single so that her only passion would be work. Evita (she likes to be called only by her first name) says she saw how her parents struggled to cope as doctors and caregivers to their four children. And yet her mother was her inspiration.

Her parents started Fernandez Nursing Home in 1948, opposite their home in Bogulkunta in Hyderabad,  as a two-bed facility. Evita nurtured it into a 225-bed facility. “Not the kind of numbers you would probably be impressed by,” she smiles. “But then corporate expansion into a network of hospitals was not our motive. I just wanted to provide honest healthcare. I did not want to run the hospital as a proprietary concern. This is a place where patients come, not for an individual doctor, but because of their trust in the institution. And we achieve that by focussing on standardising procedures and protocols.”

Evita and her siblings – two sisters and a brother – were initiated early into the world of doctors. Her elder brother was a surgeon till he died of brain haemorrhage at the age of 36 in 1985. In the same year, Evita took over the reins of the hospital.

She says she inherited not just the hospital from her parents but ethics, the right way of doing everything. “St Johns in Bangalore, where I studied between 1969 and 1975, was one of the few colleges that had a paper on ethical medical care. Internship at St Martha’s taught that in practice.”

From there to the government-run Gandhi Hospital in Hyderabad was a culture shock, Evita confesses. The numbers of patients there was so large. Resources were overstretched. “When I went to the hospital, my coat pockets used to be stuffed with bandages and syringes from home,” recalls Evita. “But numbers need not overwhelm you. You are a doctor and must provide the healing touch. That is what I learnt from Dr Suvarna who served at the government hospital for decades.”

A stint at the Royal College in England taught her the importance of systems, protocols and standards. That is what Evita brought back to her hospital in 1985. It wasn’t easy. Evita recalls how she checked a pregnant lady for over half an hour and told her she did not need any medicines as she was perfectly fine. The patient’s mother got really upset. “What kind of a doctor are you if you do not even write a prescription?” she asked and complained about Evita’s ‘inexperience’ to her mother.

That did not deter Evita. No unnecessary medicines or treatment continues to be her hospital’s philosophy. Representatives of pharma companies are not encouraged at Fernandez Hospital. An expecting mother, Shirley, confides this was the reason she chose Fernandez Hospital. “I was told they will let you give birth naturally and a C-section is only carried out if it is an unavoidable option unlike other private hospitals.”

Shiv and Karuna confess having their baby girl at Fernandez Hospital was the experience of a lifetime. “My sister in Delhi delivered at a top-notch hospital but her husband was not allowed to be by her side when their baby was born. But Dr Evita encouraged Shiv to be with me,” says Karuna. Shiv nods in agreement. “For us it was our first baby so there was a lot of excitement. What amazed me was the kind of interest and positive energy Dr Evita would radiate to her patients. Both doctors and paramedical staff worked in synergy.”

Dr Evita credits that to teamwork and transparency. It has earned her acceptance and respect from colleagues and patients.

By 1992 Fernandez Hospital found itself grappling with a rush of patients. Dr Evita had to take the emotional and financially difficult decision of demolishing the old nursing home and building a new hospital in its place.

Raising `4 crore rupees to build the new hospital was not easy. But Dr Evita believes in miracles. And she says that is what happened. An ethical bank financed the expansion of the hospital.

A decade later, demand grew even more. This time a decision was taken to start a second, state-of-the-art facility, for high-risk cases. Dr Evita found in Dr Pramod, a paediatrician and colleague for 16 years, a leader who shared her values and beliefs. He helped her set up a full-fledged neonatal facility with an intensive care unit (ICU). The facility  cost `41 crore and opened in the Hyderguda area in January 2011. It has so far handled 2,000 deliveries.

Fernandez Hospital has patients from all social strata. HIV positive mothers are treated free of cost. The ground floor treats those who can’t afford to pay. Those on the third and fourth floors cross-subside them. But the quality of care is the same.

“We never want to send away a patient from our hospital because he or she cannot afford to pay. The biggest challenge is to be accessed by the entire spectrum of society,” says Evita.

Dr Evita and Dr Pramod share the concern that hi-tech care is neither affordable nor accessible to many in the country although the highest numbers of low-birth weight babies in the world are born in India.  That is why Fernandez Hospital has taken the lead in implementing the practice of kangaroo mother care (KMC) where the mother’s bosom is advocated as the best place for very tiny babies.

Sudha has come from Karimnagar and is at Fernandez’s KMC ward. Her baby is a little over 1 kg in weight. After 10 days in the neonatal ICU, the baby is now strapped to her mother, skin-to-skin, virtually round-the-clock. Dr Pramod explains that this does not require  equipment or great expertise. There is the added advantage of these babies doing well in cognitive development and parental bonding. “That is why we strongly need to promote KMC,” he says.

Fernandez hospital has also evolved into an institute of learning and research. There are regular teaching sessions for post-graduates and workshop programmes for practicing clinicians. Evita says money from such activities is used to fund travel to medical conferences so that dependence on sponsors like pharma companies is avoided. The hospital is recognized for its two-year post-doctoral fellowship in high-risk pregnancies and perinatology.

Evita has invested her time, money and energy in training nurses and midwives. The hospital has a professional two-year midwifery programme introduced in 2011.

“I want this cadre of midwives to provide their services to urban health centres so that they can reduce the load on tertiary centres by taking care of low risk cases. India needs trained midwives to be part of the health system,” explains Evita. She says some of the midwives are as well trained as doctors .

In 2008, the Fernandez School of Nursing began admitting tribal girls from backward areas of Maharashtra and Gujarat. They were given free education, boarding and lodging. Out of  170 students who have been sponsored, 120  are from tribal regions. The first batch of 21 tribal women are now working as staff nurses in the hospital.

Evita feels strongly about women’s empowerment. She has been a vocal voice against sex selection and unethical practices at ultrasound centres and hospitals. In her own hospital, two-thirds of the staff are women.