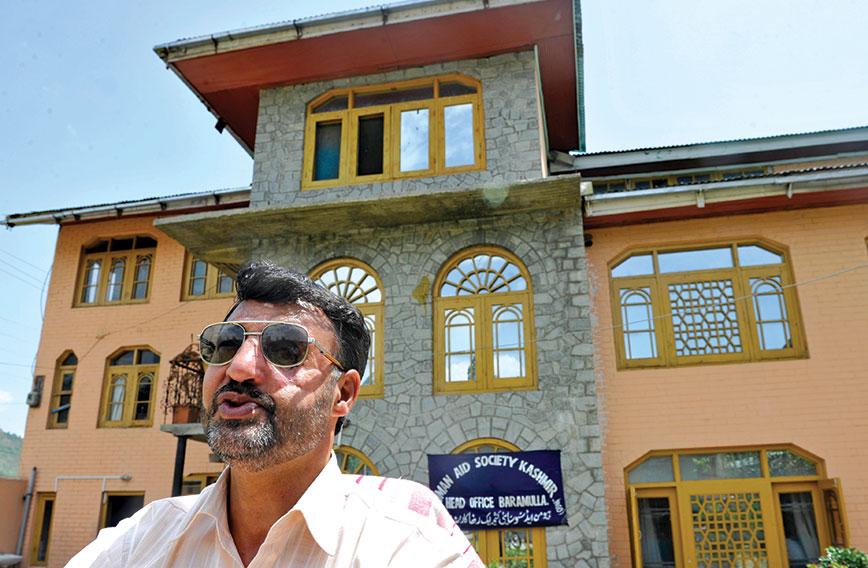 Bashir Ahmad Mir’s life is marked with tragedy. It is that experience which pushed him to help others who have suffered similarly. Mir’s father was an active political worker of the National Conference in Kashmir in the 1990s. Over the course of a few months in 1998, Mir lost his father, two uncles and his brother to militant violence. He was shot in the face multiple times and recovery took a year. In November 1999, he set up the Human Aid Society (HAS) to help other victims of violence in Kashmir.

The first donation for HAS came from Mir himself who sold his family’s apple orchards to raise `7 lakh. Now HAS sponsors the education of needy children and helps provide skills and assistance to widows and the destitute — in an amazing act of forgiveness, they belong to the families of militants.

The saying goes that violence begets violence. But in Mir’s case, violence has led to love and the will to serve. His compassion and generosity have made him an icon for those he has helped.

A family tragedy became a turning point in Bashir Mir’s life. The story of this former truck-driver, now an ardent peace activist, dates to 28 September,1993. On that fateful day his father, Kabir Mir, a civil contractor and an active political worker of the National Conference, was gunned down by a militant outfit in his village Vizer-Wagoora in North Kashmir’s Baramulla district.

His father’s murder became a prelude to a spate of violent incidents. The militants shot and injured Bashir and killed his uncle and his brother.  Bashir, now  46, could have resorted to hatred and revenge.  Instead he chose to forgive. He now runs Human Aid Society (HAS), which he funded by selling his apple orchard.

Bashir’s compassion and generosity has made him an icon for those who know him. His life is a saga of courage, dedication and a strong will to serve. It also provides a picture of the challenges ordinary folk experience in Kashmir.

Bashir says he is committed to faith-based reconciliation. In fact, he has sponsored the education of some of the children of the militants who died after they devastated his life.  “I am at peace with myself because I have devoted my life for the poor, the sick and the destitute,” he says.

Bashir dropped out of school after passing Class 11. He wanted to become an entrepreneur. His father gifted him a truck in 1982 to give him a start. Bashir drove the truck himself and began earning for his family. His father resigned from the National Conference when militants began threatening him. His only ‘sin’ was that he was a worker of the ‘pro-India’ National Conference.

Bashir sold his truck to finance a small grocery shop for his father and keep him away from active politics as militancy was then at its peak. Being a worker of the National Conference was perceived as being ‘anti-movement’ in the eyes of the ‘mujahids.’  Bashir got himself a job as a driver in a transport company. But little did he know that avoiding politics would not save his father’s life.

“I was in complete shock. Here I was, young, earning a good livelihood and living a peaceful life and then suddenly tragedy struck,” says Bashir. As news of his father’s killing spread in the area, Bashir’s younger brother Mushtaq, who was then studying for a B.Sc  degree, could not control his anger.  Overcome by strong feelings of revenge, Mushtaq left  college and joined another militant outfit opposed to the one that had killed his father.

Bashir too was simmering with rage. But he realized he needed to take care of his mother, youngest brother, sisters, wife and children. One day when Bashir was away on work, the militant outfit which killed his father raided his home after receiving a tip-off that Mushtaq had arrived with a group of militants and was planning a retaliatory attack.

The militants cordoned Bashir’s home and resorted to indiscriminate firing. Mushtaq was severely injured. The militants left Mushtaq in a pool of blood. Bashir was informed about the attack while he was on his way home.

He tried hard to reach his family but his relatives, fearing for his life, advised him not to visit his home. Finally, he was escorted by his cousins to a nearby village, four kilometres from his residence.

Braving all odds in the dead of the night he managed to reach his home escorted by his cousin and a few friends. When he opened the door to his house, he found Mushtaq bleeding profusely from his thigh. Bashir and his cousin appealed to his neighbours to provide a vehicle so that they could take his injured brother to hospital. But they refused. Running out of patience, Bashir and his cousin smashed the window panes of one of the vehicles and took the injured Mushtaq to a hospital in Srinagar.

After Mushtaq recovered, the family settled in his paternal aunt’s home. But on 6 May, 1994, Mushtaq quietly returned to his home in Baramulla to take revenge on the militants responsible for attacking his family.  He did not take Bashir’s permission. “He knew I would not allow him to go back and resort to violence,” says Bashir.

The next day,  Mushtaq was killed in a fierce gun battle. Bashir returned to his village to bury his brother.  “The locals told me that the militants had not allowed them to bury Mushtaq for he had fought against ‘mujahids’,” says Bashir.

At the funeral of his brother a shocked Bashir was forced to apologize to the militants. People now thronged to his home to offer condolences.  In the evening his relatives urged him to spend the night in a safer place.  “I could not grasp the situation. My relatives kept imploring me to join them but I did not relent,” recollects Bashir.

That same evening, two gun-wielding masked men entered his home and asked for him. Bashir was  sitting amongst his relatives including his maternal uncle, Abdul Ahad Pala. “Just to avoid harassment of my relatives and mourners, I introduced myself to them. They asked me to accompany them outside my home. I stood up and followed them. But I sensed that they were going to kill me. I bowed low and pleaded for forgiveness hoping against hope that I would be able to snatch their rifles and kill them. Meanwhile, my maternal uncle followed me. He pleaded for my life but the two gunmen started abusing him. I became furious and began shouting at them. They pointed their guns towards me.  I chanted special verses of the Holy Quran loudly. My maternal uncle hugged me. He asked the militants to fire at him and leave me alone. But the militants fired a volley of bullets at my face. Then they fired heavily at both of us. My maternal uncle died on the spot,” says  Bashir with tears rolling down his face.

Bashir was left to bleed the whole night as relatives and friends could not muster the courage to take him to hospital. Next morning, some relatives assembled at Bashir’s home and took him to a hospital in village Kreeri where the doctors referred him to SKIMS, the state’s super specialty hospital.

The doctors at SKIMS found that bones on the left side of Bashir’s face had been completely damaged. One eye, which had been hit by a bullet, was destroyed. “They immediately performed major surgeries on my face and head. I was not in a position to talk. The tragedy was that we had no money with us even though we owned apple orchards worth lakhs of rupees in our village. I came to know later that my younger sister had to beg in the hospital to collect Rs 265 which just about fetched us some tea and snacks,” says Bashir.

When Bashir came to know his sister had been forced to beg and his family was in a sorry state, he contemplated suicide.  He thought he was a burden on his family.

But in SKIMS he witnessed the courageous struggle of people  who were suffering even more than him.  “While I was being treated at SKIMS my family introduced me to a patient lying on a bed next to mine.  That was when I truly began to grasp the magnitude of violence which the entire population of Kashmir was living through.  The patient I was introduced to had faced a similar attack as I had from militants. He had lost six members of his family. Both his legs had been amputated. Yet he was eager to recover and  go home. I asked him  why. He said he wanted to return to see how God will punish the killers of his family. This was the turning point in my life,” says Bashir.

While he was in hospital, his children were expelled from school since his family could not pay their school fees. Bashir underwent medical treatment for one and a half years. Nine major surgeries were performed on him. He lost vision in his left eye and has difficulty moving his right hand. These surgeries cost him `4 lakhs. The money was donated by his friends and relatives. His facial bones were replaced with artificial bones.

Bashir realized that there were many people in Kashmir who like him were living a life of pain. He wanted to help.  He began the Human Aid Society (HAS) in November 1999. To raise money he sold his apple orchard  for `7 lakhs. He donated this money to HAS and began to reach out to victims of violence in Kashmir –  orphans, widows and the destitute.  HAS sponsors the education of needy children and helps provide skills and assistance to widows and the destitute. It has undertaken rehabilitation work for those hit by the 2005 earthquake. Over the years, HAS has rendered tremendous services in conflict-torn Kashmir. The NGO has helped 1,107 victims of violence.