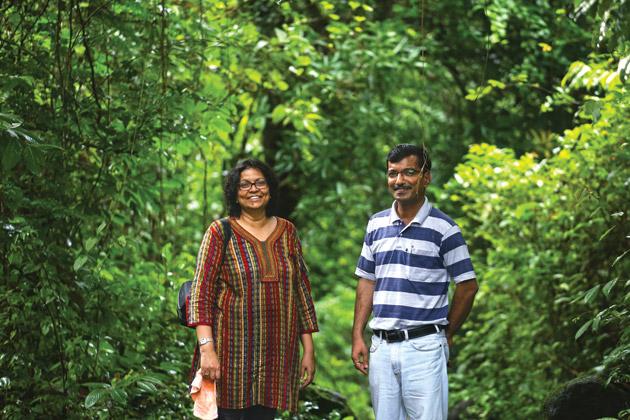 Archana Godbole and Jayant Sarnaik in one of their forests

Archana Godbole, a botanist, and Jayant Sarnaik, a public-spirited nature lover, have redefined the economics of conservation. Their organisation, Applied Environmental Research Foundation (AERF), pays families to conserve forests that grow on their land.

Godbole and Sarnaik work in Ratnagiri district of Maharashtra in the North Western Ghats, a region replete with sacred groves, rambling forests and hoary trees. Vast slopes are privately owned. When families are in need of quick cash, they cut trees. AERF pays them the same amount they would have earned had they felled those trees.

“For conservation to be successful it has to make economic sense,” says Godbole. Their unique approach has worked. Till 2017, more than 5,000 acres of forest land was secured. The aim is to secure 10,000 acres by 2050.

The Western Ghats are one of 34 biodiversity hotspots in the world. Godbole and Sarnaik are ensuring that it retains its priceless status.

Below is a piece that appeared in Civil Society's September-October 2015 edition. Read on.

A narrow mud path begins under a sprawling banyan tree and takes us up rocky slopes thick with green cover. It is slippery underfoot because it has been raining and we have been told it would not be wise to go more than a short distance. The climb will be manageable, but the way down can be tough and messy, perhaps even dangerous. Being July, we are in the middle of the monsoon in the Western Ghats, one of the world’s 34 biodiversity hotspots. As is to be expected, the fecund forests here are burgeoning with new life. The undergrowth is difficult to negotiate. And there are venomous snakes and other forms of wildlife to think about.

So we don’t go too far in, but the periphery in itself is an important landmark. A solitary metal board dwarfed by magnificent greenery announces a unique effort in conservation. From here begin 800 acres of forests under the village of Umre where local dwellers have signed three separate conservation agreements not to cut trees for the next five years in return for financial compensation. Up ahead there are another 538 acres in the village of Kalambaste for which  similar agreements been put in place.

The Applied Environment Research Foundation (AERF) is the driving force behind these two conservation agreements. The two parcels of forest are contiguous and connect with the buffer zone of the Sahyadri Tiger Reserve. A swathe of hillside in the Western Ghats has in this way, through agreements, been conserved as a habitat for rare trees, medicinal plants and wildlife.

The Western Ghats are mountains that run parallel to the entire west coast of peninsular India. The sea is not more than 30 km away. Multiple gene strains continue to thrive here though they are also getting decimated and many are either extinct or almost so because of felling and mining.

The villages of Umre and Kalambaste are in the Sanghameshwar block of Ratnagiri district. They fall in what is called the  Sahyadri-Konkan Corridor in Maharashtra. It is the North Western Ghats.

The AERF has worked with the private owners of these forests to shape conservation agreements that compensate them adequately. If the agreements had not been signed, it is almost certain that trees would have been felled indiscriminately and sold.

Felling has been quite common in these parts. Local dwellers in need of money are quick to have deals with contractors who put cash down. The wood goes to nearby industries for use as timber and fuel. But now the conservation agreements have provided an alternative. It is possible to preserve the trees for almost the same money that would have come from felling them.

Archana Godbole and Jayant Sarnaik founded AERF in 1994 to save the biodiversity of the North Western Ghats. It has been their mission to find ways of making conservation financially attractive and meaningful to people. Telling people to protect the environment is not enough. It is more impactful to show how natural resources can be used sustainably for economic gain.

Godbole, 52, is a botanist, who began coming here in search of sacred groves when she was working for the Botanical Survey of India and simultaneously doing her Ph.D. That was in the late eighties.  Sarnaik, 47, got involved as a public-spirited nature lover but has gone on to acquire a deep understanding of biodiversity. After 20 years of fieldwork and studies they are regarded as experts on the region’s natural resources and environmental traditions.

The three days we spend with Godbole and Sarnaik are as packed with learning as they are full of visual delights. Sacred groves, rambling forests, ancient temples, medicinal plants, rare birds and hoary trees — we go on a magical tour of nature’s mysteries.

As we stop our vehicle at a high point on the first day, Godbole and Sarnaik point to vast expanses of greenery on the slopes of the North Western Ghats that they tell us are privately owned. The land belongs  to families with very many members. The forests themselves are not more than a few decades old and date back to the time when these families stopped farming on their land.

Since the claimants within a family are many, big holdings are broken up into very small ones in the records, sometimes as little as an acre. This prevents the government from taking them over.

The farming families, being essentially poor, use the trees when they need emergency money, easily turning them into cash by calling in a logging contractor.

Selling the land outright is not an option because ownership within the families is complicated. The locations are also not good for tourism since they are remote and on slopes. Access is difficult.

But these small private forests play an important ecological role. Taken together they represent substantial forest cover. They are home to rare plants, trees and animals.

“It is not that the people here don’t know the inherent value of keeping the forest standing. They have that knowledge. But it is their economic need that drives out that wisdom and makes them hand over their trees to a logging contractor,” says Sarnaik.

“They will tell you how healthy forests are linked to rainfall and groundwater recharge. All this they know, but they also need money in their pockets,” he says.

“The time has gone,” says Godbole, “when you could ask someone not to cut a tree to save the planet. No one buys that argument. For conservation to be successful it has to make economic sense.”

The first agreements AERF signed were in October 2008 with five farmers for five years. Ten areas were identified and 10 farmers were approached. Five agreed. Last year, when the agreements matured, all five farmers agreed to renew them.

AERF is particularly fond of these five farmers because they were the original believers in this novel attempt at conservation. But between 2008 and 2013, many more agreements were signed and 2,800 acres have been secured in the Sanghameshwar block of Ratnagiri district.

“We are targeting 10,000 hectares,” says Godbole. “We expect to protect the forests under such agreements till 2050. That is the target we have set.”

Before the agreements were signed, AERF did GIS studies and validated them on the ground to identify good tracts that had not been cut. In this way it zeroed in on the original 10 areas.

“The local people said the logging contractor gave Rs 5,000 for a clump of trees. We said at first that we could give Rs 3,000 to Rs 5,000 over five years,” says Godbole. “Then we negotiated and checked the quality of the forest and reached a figure of Rs 3,000.”

The first agreements were funded with Rs 5 lakh from the Rufford Small Grants Foundation (RSG). From 2008 to 2013, AERF worked hard to assess biodiversity, mark trees with carbon sequestration and plant more trees.

To expand and do more agreements, AERF launched a web-based initiative called My Forest to appeal to the urban nature lover. It became possible for individuals and companies to sponsor forests in the North Western Ghats. A Business and Biodiversity Programme was also launched.

“There are people who are serious about conservation but don’t know what to do. To them we said you can sponsor a forest,” says Godbole.

Praj Industries and Innoventive Industries based in Pune took 50 acres each. Pukka Herbs, based in the UK, took another 50 acres.   Further down the line, money came from the Critical Ecosystem Partnership Fund.

Unlike the logging contractor, AERF was specific about money and area. Boundaries have been mapped and guarded. “They now say to us, ‘We want to give you forests so that you will keep them safe for us.’ Ultimately the aim is the same — to conserve the forest,” says Sarnaik.

At the core of AERF’s conservation effort is the sacred grove. In contrast to private forests, the groves are on land owned by the revenue department but managed by communities. Temples have been built to local deities who came out of folklore. A  dream was translated into a belief and from that came an idol and then a temple. Around these temples grew trees and plants. Water sources were protected.

Some of the oldest, most valuable and now endangered trees exist in sacred groves. Linked to the presence of the trees in the sacred groves are bats, giant squirrels, eagles, the Great Pied Hornbill and the Malabar Pied Hornbill.

In the North Western Ghats there are an estimated 2,200 sacred groves. Godbole says she began by working in 10 sacred groves and by 2008 took up another 40. In the past couple of years, 30 more sacred groves have been added. AERF now works for the preservation of 80 or so sacred groves.

“The sacred groves represent a traditional mechanism by which people get connected to nature. They are examples of community management of resources,” says Godbole.

Birds like the Great Pied Hornbill and the Malabar Pied Hornbill nest in old trees found in sacred groves. They look for natural cavities in the Bahera tree (Terminalia bellerica). The birds eat fruits and seeds and play an important role in promoting germination.

“Once the seeds pass through the alimentary canal of the birds they germinate. This is why birds like the hornbill are called forest farmers. So there is a complete link — sacred groves,  Bahera trees, hornbills and dispersal of forests across the landscape,” says Godbole.

“One Great Pied Hornbill occupies an area of 50 sq km,” says Sarnaik. “They are big birds who eat a lot and so you can imagine the amount of seeds the bird can disperse over the landscape. But for that to happen the hornbill needs its natural habitat. It nests in the natural cavities of Bahera trees, and such cavities form in trees that are 100 years old,” says Sarnaik.

“Since the rate of deforestation is increasing, the hope is that only these trees in sacred groves will survive,” says Sarnaik. “Some of these trees have been around 200 to 300 years. The sacred groves are therefore heritage sites.”

As with the My Forest initiative, AERF has built an economic aspect into the conservation of sacred groves. At one sacred grove, HCL, the software company, had sponsored the planting of traditional trees that have now grown.

AERF has also been training and involving local people in collecting and processing the fruit of the Bahera tree, which is one of the constituents of triphala, used in Ayurveda as a medicine. The dried and processed Bahera tree fruit is sold  to Pukka Herbs in the UK.

AERF has also shown how to use the bark of the Bija tree to make wooden tumblers. The Bija bark is known to control blood sugar. Water stored in the tumbler overnight is supposed to be good for diabetics. The wooden tumblers are smartly packed and for sale. The profits from such initiatives are expected to bring economic benefits to the community and promote the conservation of traditional trees in sacred groves.