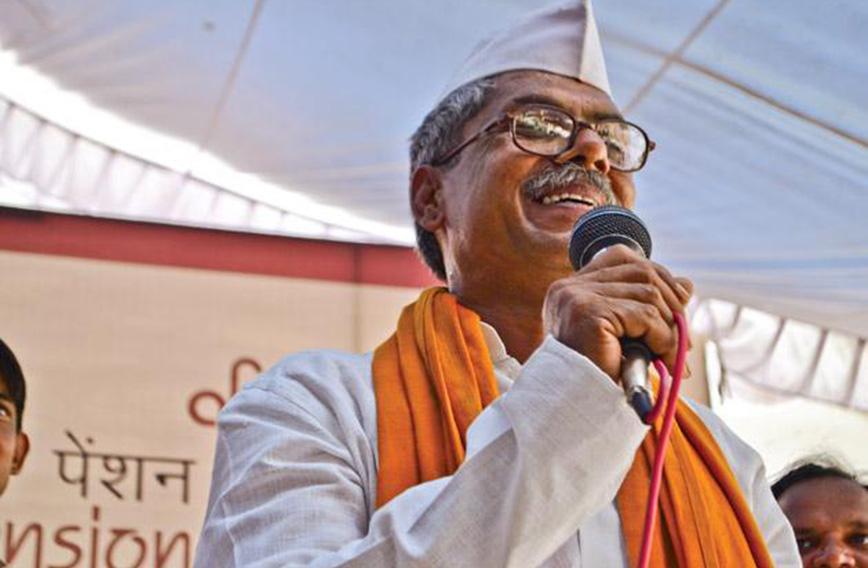 Shankar plays the neta at the Pension Parishad

Shankar Singh has played a key role in spreading awareness about the Right to Information (RTI) law in the villages and cities of Rajasthan. In 1997, when the Mazdoor Kisan Shakti Sangathan (MKSS) rolled out the Ghotala Rath Yatra in Jaipur it was Shankar’s brilliance as a performer that brought RTI alive for ordinary people. Along with Aruna Roy and Nikhil Dey, he is a founder of the MKSS. While others lobbied the system, Shankar showed how to happily take the message of transparency to the streets.

Shankar gave up the opportunity of being a government schoolteacher so that he could be an activist. In 1994, he came up with the concept of a public hearing or jan sunwai to communicate information regarding public funds to the ordinary citizen. Communication is obviously essential to public life, but Singh is truly a pioneer in conveying complex political and social ideas at the grassroots.

When the Ghotala Rath Yatra (Chariot of Scams) rolled out at the 53-day dharna demanding the right to information in Jaipur in 1997, it was a masterstroke in communication. Shankar Singh  was the moving force behind this unique messaging. Dressed as a neta he stood on the chariot and irreverently acted the part of a mindless politician. What he said was funny but it was also tragically true. So was the song, ‘Ghotalaraj ki jai jai bolo‘. Its lyrics underlined the irony of representative politics, divorced from people and their realities.

Not far from the arc lights of the RTI (Right to Information) movement, Shankar has played a key role in communicating complex ideas at the grassroots. Seldom heard as a spokesperson and always seen as part of a group, Shankar is a rare talent. He is one of the most valued members of the Mazdoor Kisan Shakti Sangathan’s (MKSS) core group.

Shankar was born in Lotiyana village in Ajmer district of Rajasthan. He is the only son of a patwari. His father died when he was around 10 years old. His mother toiled on public works as a daily wage labourer to pay off the debts her alcoholic husband had left behind as an unwelcome legacy. Her 1.5 bighas,  barely yielded two months of grain. Shankar is a Rawat. The Rawats are an economically and socially backward community, but with strong egalitarian principles. Both Shankar and his mother have an innate sense of equality.

Noji Ya, as she is affectionately called now, really laid the foundation of Shankar’s life. She decided to send him to school, at any cost.  Shankar completed high school but employment became a serious concern.

Shankar changed 17 jobs. He worked on a poultry farm, sold tea, pakoras, vended kerosene, became a babu, a mate on public works a labourer in a namkeen factory and more.

He discovered to his surprise and chagrin that too much literacy was a disqualification.

Shankar recalls that when he went to a poultry farm for a job, the owner asked him what his educational qualifications were. Shankar proudly replied that he had passed high school. The owner retorted that he was too literate and sent him away. As he was leaving, he overheard the owner hire an illiterate man.

So the next poultry farm he went to, he told the owner he was illiterate and he was hired! Since he didn’t want to rouse any suspicion, Shankar drew lines on the wall with a piece of coal to count the egg-trays. The owner admonished him for marking the walls and gave him a pencil and notebook to draw lines.

Meanwhile Shankar secretly studied for his graduation. He worked for three years at the poultry farm. When he went to the owner with sweets to celebrate his academic success, the owner was shocked to realise that Shankar was very literate!

With a Bachelor of Arts degree to his credentials,  he got a job with the Adult Literacy programme in Ajmer. It was there that he discovered his extraordinary skills as a communicator. He made friends with people working with the Social Work and Research Centre (SWRC) or Barefoot College, Tilonia. Fascinated with his ability to connect, they persuaded him to join their team. Shankar’s ready wit, his sharp satire with malice towards none and his compassion turned him into a grassroots star.

Shankar set up SWRC’s communication section attracting talent from everywhere – Ramlal and Chauthuji from the Nat community of traditional performers and Bhanwar Gopal amongst others from non- traditional performing groups. Shankar left with the group for a workshop in Saharanpur with Alarippu, a creative theatre group based in Delhi, organised by Lakshmi Krishnamurthi and Tripurari Sharma. Tripurari who teaches at the National School of Drama, continues to be an inspiration and comrade in Shankar’s theatrical journey.

The group returned and orchestrated a decade of exciting growth. Every day new ideas and concepts were discussed, experimented and performed. This group of traditional and non-traditional performers energised an entire generation of activists in Rajasthan and across the Hindi heartland. A gharana of activist communication was born.

All through this period, Shankar struggled with his family. They wanted him to get a government job, not be a performer. Performers are economically and socially at the bottom of society.  At the SWRC, Shankar found a friend and admirer in activist Aruna Roy who was determined to have him remain in theatre and activism. Arguments and persuasive logic finally prevailed and Shankar turned down the government schoolteacher job he had landed. Instead, he decided to combine his communication skills with his political concerns and work for his people.

Nikhil Dey came into their lives in the early 1980s. The three of them ­– Aruna Roy, 41, Shankar Singh, 33, and Nikhil Dey, 24 – decided to begin work in Devdungri. They lived in Shankar’s sister’s mud and stone hut, then in Udaipur district in 1987. They worked to shape a non-party, people’s organisation with the political ideology of people’s empowerment. In the first three years, significant struggles on land and wages gave birth to a desire to form a Sangathan. On 1st May 1990, the Mazdoor Kisan Shakti Sangathan (MKSS) was formed by a group of over 1,000 people at Bhim, Rajasthan, and the rest is history.

Like all great performers, Shankar brings an infectious vivacity on to stage. He could be performing at a street corner, a makeshift arena or even on a handcart! His dexterity of mind and his immense compassion lend quality and depth to all his performances. But when it came to choosing between acting and activism his human and political concerns dominated. The famous theatre director, BB Karanth, once tried to persuade Shankar to remain with theatre. But Shankar’s concerns were for the poor.

Shankar’s infectious warmth is universal. There is no malice or ill- will even when he quarrels. He makes friends with those he critiques. He fights injustice, corruption and oppression, but never a person. His artistic expression rises above petty pique, or personal rivalry. His performance is memorable and leaves behind ideas that resonate long after he has left.

Activists respect Shankar for his great skills as a communicator, a speaker, an actor and puppeteer. But what is special is his ability to link political thought with activism. He articulates the language of the people and the thoughts that flow through their minds. He has the knack of subsuming his persona with the people. He is one of them. He is the audience and he is the actor. He is Chaplinesque, combining pathos with sharp political comment.

Shankar’s contributions to theatrical performances are innumerable. Take the song, Mein Nahin Manga, or the street play, Khazana which ingeniously defined the worker-peasant and the ordinary citizens point of view on the RTI.  His contribution has always strengthened the collective and encouraged individual creativity.

Shankar with Bhurji and many others converted an ordinary handcart into a rath replete with stuffed horses and the Ghotala Rath Yatra was born. A group from Baran composed the songs. The ek-abhinay of the neta was Shankar. As the Ghotala Rath rolled from village to city, it captured the imagination of the people and drew them into the discourse on politics, leadership and democracy with irresistible humour and political satire.

Corruption is endemic in village development. Officials, contractors and the sarpanch get together to siphon public funds meant for roads, irrigation, drinking water and other public works. MKSS demanded that government accounts be made public. People would then know where money was being misspent and whether the claims of expenditure made by officials were correct.

Shankar managed at that time to access some official records. He copied them laboriously by hand. The MKSS had, meanwhile, crafted the mode of the Jan Sunwai (public hearing) to creatively place such information in the public domain.

These processes electrified the people. From the very first Jan Sunwai held in Kotkirana in December 1994, Shankar effortlessly linked this information to human stories, to the lives of the people with the pathos of drama. He imbued the information with life and helped contour a dramatic depiction of corruption. This empowered people. It gave them the courage to fearlessly testify, despite threats.

The Jan Sunwai campaign of 1994-95 led to the evolution of a platform of the RTI and the yen for a more participatory democracy. It was a precursor to what has now become the discipline of the social audit.

Shankar has been a guru to many young people helping them understand the process of the social audit. Sowmya Kidambi, the current Director of Social Audit in Seemandhara and Telangana is one of his students! He has the ability to spot errors in accounting and counter check accounts with implacable logic. Though never publicly acknowledged for this talent, he remains an important part of the collective that contributed to a very important tool of governance.

Whether he is addressing protestors at the Narmada Valley or officials at the UN headquarters in New York, Shankar always makes a very powerful statement. It is his empathy with the people, his uncanny ability to gauge the audience, and reach out with compassion, that helps him connect. For him, the truth must be unfolded and conveyed engagingly. As Tripurari once said, “he thinks with his heart and feels with his mind!”

At protest sites when tensions rise, Shankar often breaks into song leaving the frontlines of the police amused, bemused and disarmed by the truth of his lyrics. In New York, Shankar took Ban Ki Moon, Secretary-General of the UN, by utter surprise when his puppet unexpectedly popped up and asked him an unscheduled question - “Will the UN meet basic transparency norms on its expenses across the world?”

An innate sense of equality and dignity has become for him and his comrades the realisation of the MKSS slogan: “We will create a world of justice and dignity for all.”

At 60, Shankar has incredible energy. He works with determination and hope completely committed to the rights of the deprived. He also works tirelessly. He will sing, walk miles in searing heat and dust, ride on trucks and listen to the people, to their problems and grievances. He will put up tents for a dharna. All with equal ease and sincerity.

Watch a video of the song Mein Nahin Manga at