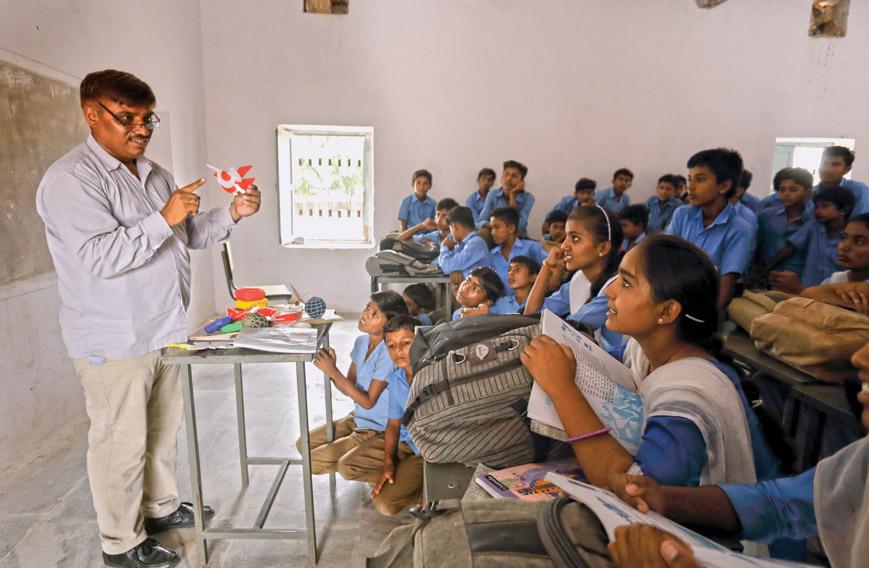 Ramesh Gharu is a charismatic teacher and his classroom at the government school at Siyani village in Rajasthan is always packed with children hungry to learn. He knows how to keep them hooked by using an array of self-made toys for learning such as doughnut rings from polythene to explain weight distribution.

Gharu’s teaching style is far removed from the compulsions of a syllabus. He is innovative and passionate and connects completely with children. He is both a teacher and a performer.

Gharu is from the lowest rung of the Scheduled Castes. His parents were safai karamcharis and when he was young, he helped his parents when they went out to clean toilets. Education has emancipated him, and he understands what it can do for his students.

Below is a piece by Umesh Anand that appeared in Civil Society's September-October 2016 edition. Read on.

When Ramesh Gharu enters a classroom it is packed to capacity. There are students all over — behind their desks, standing at the back, on the floor in front. They are thrilled to be there and the excitement is visible on their faces. Eyes shining, they hold on to each word and try to outdo one another with answers, at times speaking together in noisy outbursts.

Gharu has the appeal of a rockstar. He knows to go live. He can make sparks fly. His personal energy gets a frenzy going. From start to finish, he sets the pace, regulating the highs and lows.

Using a variety of innovative teaching aids, which he has made himself, Gharu can in a single lesson go from maths to geography to language to elementary science to gender. It is a kaleidoscope of information and ideas.

The reputation of government-run schools is generally dismal. The infrastructure sucks. Teachers don’t care and lack in abilities. Books aren’t available. Children don’t turn up and when they do it is questionable how much they actually learn.

Gharu has confronted this ailing system and turned it on its head. He has shown that even in the most bleak of circumstances teaching can be fun and learning a liberating experience. For the past 20 years in a government school at Siyani village in Barmer district of Rajasthan, close to the border with Pakistan, Gharu has built a great reputation for himself as a perceptive teacher and as a compassionate human being.

“For me teaching is all about involving children. Children finally teach themselves. As a teacher, I see my job as creating an environment in which a child can explore and experiment. What is language after all? The letters of the alphabet remain the same. How you use them is what matters,” says Gharu.

“Children should be given the opportunity to play around with the alphabets, play around with ideas. It is then that they learn quickly and remember what they learn and find the classroom experience meaningful. If I as a teacher can bring mathematics, geography, science alive in ways that don’t intimidate the child, a process of learning is begun. The challenge is in getting started in ways that are happy and wholesome and not destructive. A child must get the self-confidence to explore and make mistakes.” 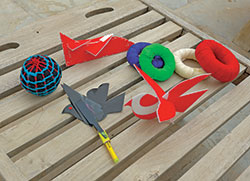 A short, thickset man, who looks kind of muscular because of a big chest, strong arms and noticeable shoulders, Gharu is a natural teacher. He has an MA and a B.Ed and all that, but his success as a teacher comes from his own insights and inventiveness. He has chosen to remain a primary school teacher though he has the designation and salary of a lecturer.

“I am happiest in the classroom with young children,” says Gharu. “It is where I belong and where I can have the most impact on young lives. I also don’t want administrative posts in which I will sit behind a table and spend my time doing bureaucratic things.” 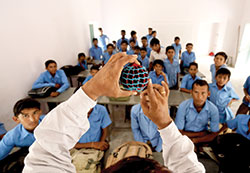 A deep sense of compassion defines Ramesh Gharu. It is because of his humble antecedents. As a Gharu he comes from the lowest rung among Scheduled Castes. Having evolved from there, he has dropped Gharu from his name in the official records. So, Ramesh Gharu has become Ramesh Kumar. But in everyday interactions and for his email,Twitter and Facebook accounts he continues to use Gharu. He is often referred to as Gharuji.

His parents were safai karamcharis, which is a euphemism for workers who clean toilets and are manual scavengers. In his boyhood, and even as a young man, Gharu would help his parents when they went out to clean toilets.

The discrimination Gharu has faced could have made him a bitter and angry man. Instead he is gentle and soft spoken. He brims with energy, but lacks aggression even though he admits he continues to face discrimination among his teaching colleagues.

Gharu’s life changed because he managed to get through school and then college. He did different jobs, all of them inconsequential, and his caste followed him wherever he went. He would invariably end up being told to scrub and clean and perform menial functions.

It was his dream to join the Army. In college he was part of the National Cadet Corp (NCC), where he distinguished himself. His NCC success gave him direct access to the round of final selection into the Army, but he never made it.

Gharu began teaching and giving tuitions. As he journeyed along he found employment in the Kendriya Vidyalaya at the Air Force station in Barmer. For the first time he got what he considered a decent salary — Rs 2,500. He also found acceptance because the forces are free of biases based on caste. 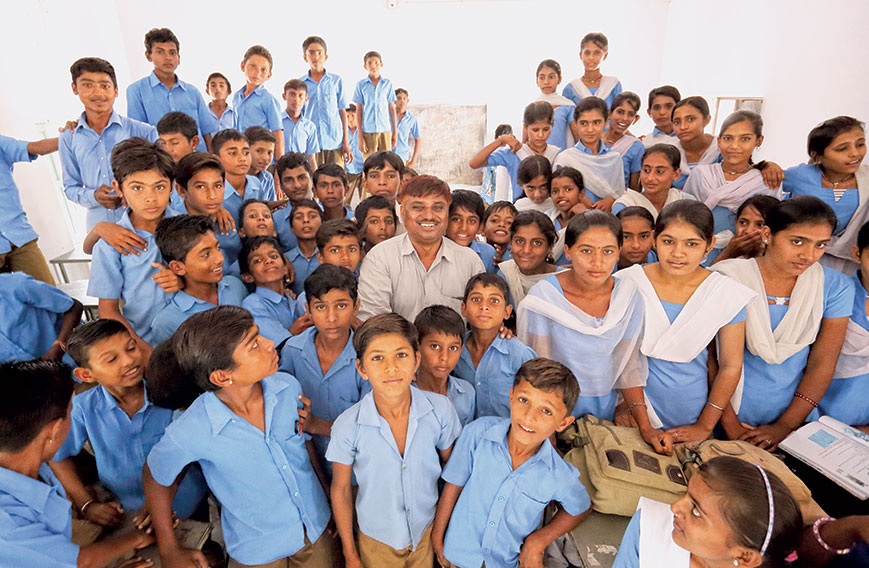 Ramesh Gharu with his students

It was around then that someone suggested he teach street children in his spare time. He began doing that and became closely involved with families with very little. It was while helping street children get an education that he got interested in making toys and saw the opportunity in creatively recycling waste.

The next stage for him was a job as a government teacher in 2006. He was posted in the government upper primary school in the village of Siyani. For many years, till he acquired a motorcycle, Gharu would walk the last six kilometres to the school.

He remained posted at Siyani for 20 years because, he says, there are no takers for jobs in a school so far out. Over time the school got upgraded from upper primary to senior secondary. Last year, he was transferred to the government secondary school at Railway Kuan No 3 in Barmer city.

It was at the Siyani village school that Gharu’s talent as a teacher grew and blossomed. It was here that he became a legend among the students for his novel teaching methods and the passion with which he would conduct his classes. He faced discrimination from other teachers for being of a lower caste, but from the children there was unquestioning acceptance. His success was in integrating his lessons with the lives of the children.

Gharu has cultivated the manner of a performer. He is a teacher but the children could just as well be watching a magician or a juggler. His classroom aids include a soft ball made from waste cloth and covered in plastic. A bird made from discarded X-ray film attached to an old ballpoint pen so that wings can be made to move. A bird made from wedding cards. An aeroplane made from old cardboard. Doughnut rings from waste polythene that can be used to balance loads on the head.

Each aid has multiple functions. The first lesson is in conservation and controlling pollution since all the aids are made from recycled waste. The ball is good for a game of catch. But it can also be used to teach children about the shape of the Earth and its interplay with the Sun and the Moon.

A polythene doughnut ring, when placed on the head, makes it easier to carry a load. The weight is distributed and becomes more manageable. There is a lesson in elementary science here. Traditionally women put a thick wad of cloth under a pitcher of water or a bundle of firewood carried on the head. It allows them to balance the load and maintain posture.

The doughnut rings Gharu makes come in many colours and sizes. Placed side by side they can be used to teach numbers 10, 100, 1,000 and so on. It is vivid and can be easy to grasp.

The bird with flapping wings made from old X-ray film is used to teach bird calls. What does a myna sound like? What does a crow sound like? It is also an opportunity to talk about gender equality and the rights of girl children. Like birds shouldn’t be caged, girls should be left free to discover their potential. Girls are the pride of a family, Gharu tells his students. The message goes down well with the girls in the classroom. They come from male-dominated families. 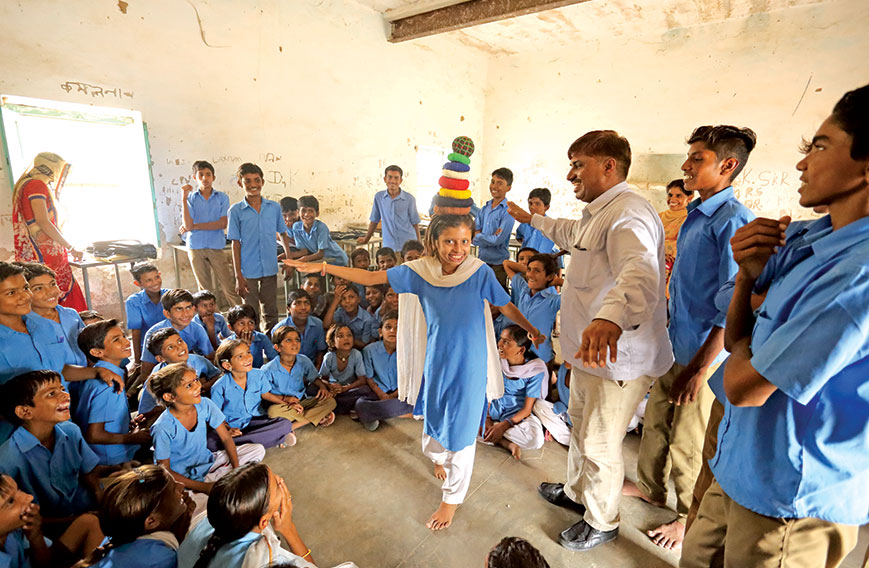 Classes are full of action and fun

Over time, Gharu has acquired the reputation of being a teacher’s teacher. Other teachers reach out to him to learn his methods. But he will only help government schools, he says. He also trains teachers at the District Institute of Education and Training (DIET) in Barmer.

It has been an amazing journey from being among the lowliest of the low and cleaning toilets to now being regarded as a pundit of inventive teaching methods.

Gharu earns a salary of Rs 52,000 a month from the government. He has built a small house where he lives with his wife, mother and six children. Two of them are his own girls, two are adopted and two belong to his younger brother whose wife has left him. The younger brother is still a sweeper.

“We are very happy,” he says, exuding satisfaction. “We have everything we need. I enjoy my work as a government teacher.”