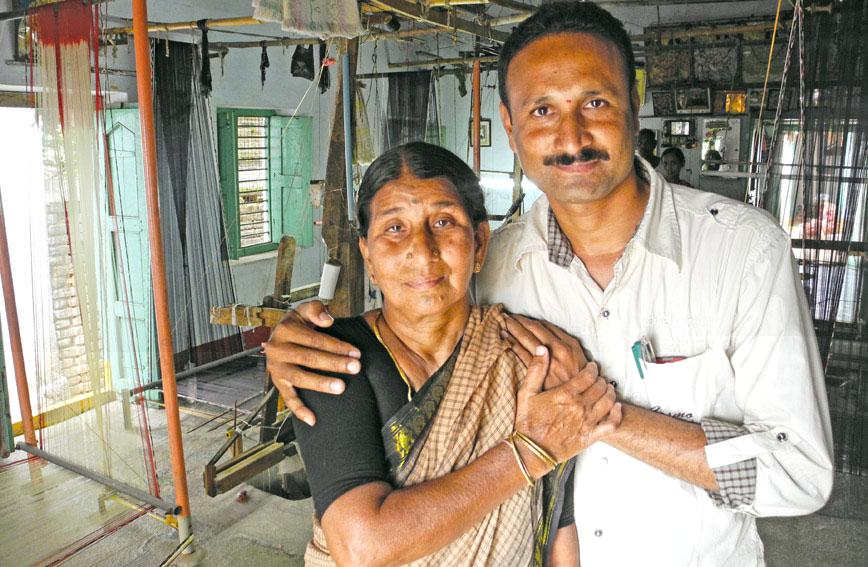 Chintakindi Mallesham has revolutionised the way the famous Pochampalli silk sari is made in Andhra Pradesh. He has invented and patented a machine which has cut to one-third the time needed for processing the thread for weaving a sari on a loom.

It was his mother, Lakshmi’s plight that moved Mallesham to invent a mechanised version of the traditional Asu machine which women weavers used to process the thread.

Lakshmi lost vision in her right eye and has a severely damaged shoulder because weaving the sari the traditional way is an arduous task and puts immense pressure on the shoulder and the eyes. When it was time for her sons to start working, she told them to find another career.

Mallesham had studied only up to Class 10. He took on the work of an engineer and put together the machine after failing multiple times. Mallesham has replaced the woman’s arm with a mechanical one which winds the fine silk thread on the pins and offers a choice of settings. A sari can now be completed in three days instead of five.

The weavers of Pochampalli are happy — they can produce more saris and their incomes have gone up, all thanks to Mallesham who now has his own company called Shanker Engineering Works.

Chintakindi Mallesham, 39, has revolutionised the way the famous Pochampalli silk sari is made in Andhra Pradesh. He has invented and patented a machine which has cut to one-third the time needed for processing the thread needed for weaving a sari on a loom.

Women of the Padmashali caste traditionally spend a whole day processing the thread by hand using a device with 42 pins called an Asu. It involves the right hand going back and forth as many as 9,000 times for a single sari.

Mallesham has mechanised the Asu and replaced the woman’s arm with a mechanical one which winds the fine silk thread on the pins and offers a choice of settings.

The result is that the thread needed for three and even four saris is now processed in the time that used to be taken for one. The thread is then dyed and put on a loom. A sari can now be completed in three days with the help of the machine compared to four or five days earlier.

With more thread processed it is possible to invest in a greater number of looms and increase production.

There are health benefits too. Repetitious use of the right arm results in irreversible damage to the shoulder. Women also lose their sight because the right eye has to track the rapid movements of the arm and the fine thread looping on to the pins.

Mallesham was motivated to make the machine because of the plight of his mother and so he has named the machine Laxmi Asu after her. After 30 years of using the Asu, Mallesham’s mother can’t see with her right eye and has a severely damaged shoulder.

“I saw what my mother was going through and wanted to help her end her suffering. That is why I thought of designing a machine. Of course I didn’t know what shape it would take or how I would do it. But I thought I should try,” says Mallesham.

Like many men of his village – Sharjipet in Andhra Pradesh’s Nalgonda district – Mallesham too would have been a weaver. But his mother’s condition and her advice that he choose a different livelihood made him think of devising a machine.

“I told him and my other son to do something else, find another career. There was no future in being a weaver,” says Laxmi.

However, Mallesham attended formal school only up to Class 6 and then somehow worked his way through the Class 10 exam. It didn’t qualify him for anything much better. But he dreamt up the automated Asu and figured out through trial and error ways of rigging it together.

For someone with as little education as he had, it was a heroic effort. Perhaps it was the desperation to escape from the impoverished life of a weaver that kept him going. But the machine got finally made.

He is now a small entrepreneur with a workshop and a company called Shanker Engineering Works. An IC board which he has designed for the latest model of the Laxmi Asu has ‘Chintakindi Brothers’ stamped on it.

The Laxmi Asu costs Rs 13,000, which is Rs 3,000 cheaper than a few years ago, thanks to refinements that Mallesham has introduced. His first machine was made in 1999 and since then he has improved it twice, the latest being in 2005 when he managed to put together an IC board to vary speed and choose the number of times that the thread needs to be taken around one of the 42 pins on the Asu. 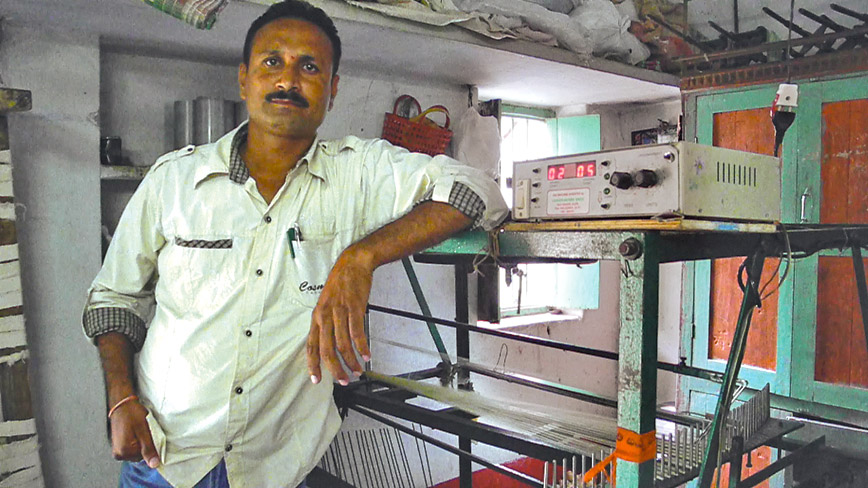 He makes four or five machines a month though the market is huge considering there are 30,000 households where the Pochampalli sari is made in Andhra Pradesh. But these families are poor, banks aren’t forthcoming with loans and the Andhra Pradesh government has not done anything significant to help.

Mallesham’s own family has gone from making Rs 400 a month as weavers to the Rs 15,000 to Rs 20,000 a month that he now earns from the Laxmi Asu. Their house is a two-storey structure, with tiled floors. There is a colour TV  with a satellite connection in the drawing room. He owns a Pulsar motorcycle, mobile phone of course and laptop on which he shows a video of how his machine is an improvement over the traditional Asu.

Mallesham’s two daughters both go to school. They will never be weavers working for a pittance. The elder one is in Class 9 and the younger in Class 5.

None of all this came to him easily. The decision to design a mechanical Asu was fraught with uncertainties. It often seemed a very foolish and hopeless endeavour which stretched over seven years. He spent his meager savings and borrowed from relatives. But he stuck to his idea and finally managed to produce the machine.

“People would call me lazy, saying that I was tinkering around because I didn’t want to work hard as a weaver like the other men. There was a time when everyone I had borrowed from was after me to give their money back. They would say I was illiterate and didn’t know what I was doing, that making machines was the job of engineers and people with a science education,” says Mallesham.

Faced with this, he went off to Hyderabad, where he worked as an electrician and continued to perfect his machine. His problem was to get the thread to come on to the pin in exactly the way required by the design.

One day when out on work he found a machine which, though used for a different purpose, had a mechanism that could help him get the thread on to the pin. He bought the part and fitted it and the Asu became functional.

Mallesham is self-taught. At first he made a crude contraption with wood which was heavy to move. He then developed a steel frame. The control box based on an IC board was developed by reading the books of engineering students.

His fortunes really turned when he came to the notice of the Honeybee Network and the Innovation Foundation of India. From them he got help to formalize his design and file for a patent.

The traditional Asu is still used widely for the Pochampalli. But those who can put together the finances for the Laxmi Asu know what a difference it makes.

In Warangal district, some 15 km from where Mallesham lives, is a cluster of weavers in what has come to be called Weavers’ Colony. There are looms in every home here. Some of the families have the old-style Asu and some the Laxmi Asu. 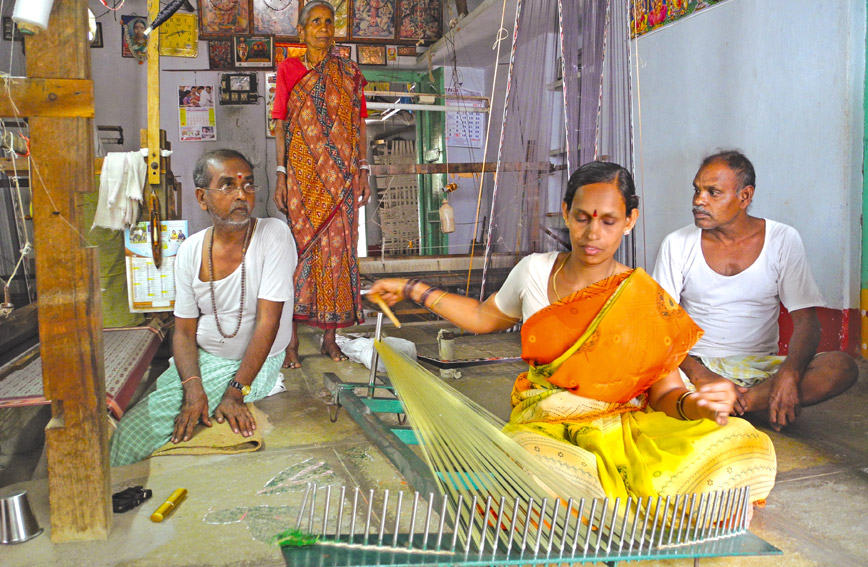 Chandrakala, about 35, has been handwinding thread on the old Asu since she was 16 or 18. The Laxmi Asu has liberated her from that drudgery. Her family owns the latest model with a control box based on the IC board.

Chandrakala says: “This machine helps us do more than three saris a day. We have more looms now.” More than 16 years of using the old Asu has taken its toll. Her shoulder gives her trouble and she finds her vision stressed. But with Mallesham’s machine she feels she can keep working “till I die”.