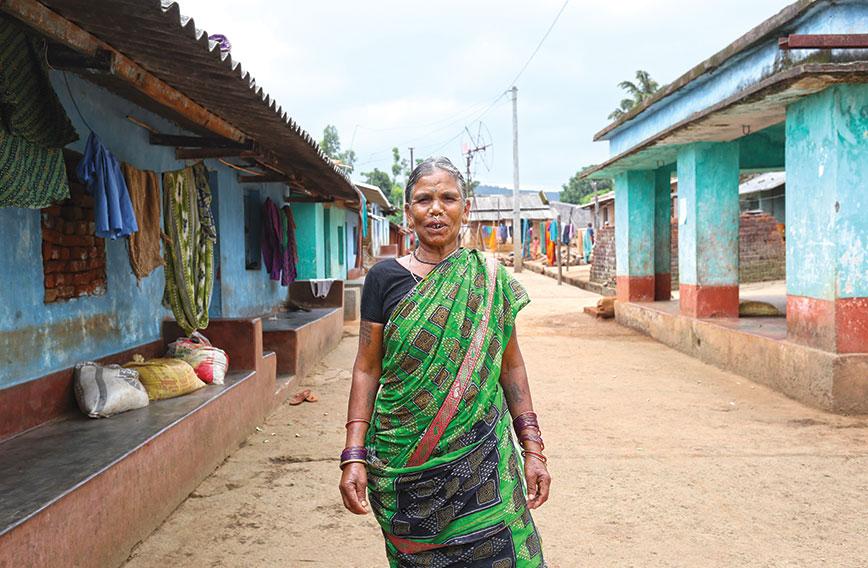 Sumoni Jhodia presides over the Ama Sangathan, a federation of several tribal groups in Odisha. It makes brooms and deals in minor forest produce and other local products.

In 1991, Jhodia fought her first battle against hunger in her village, Siriguda. She talked the villagers into starting a grain bank. Moneylenders objected. And then joined it too.

Forests were controlled tightly by the forest department. Jhodia, with 450 women from 10 districts, successfully petitioned the then chief minister, Biju Patnaik, into granting the women access to minor forest produce. That’s how the Ama Sangathan got access to grass and started making brooms. They also got a licence to buy, sell and market brooms.

Jhodia has battled the liquor mafia in her district and ensured development works were implemented honestly. Her village has a school, a fair price shop, a community centre and a dam they built across a stream. It is spotlessly clean because everyone composts their waste.

Below is a piece that appeared in Civil Society's September-October 2015 edition. Read on.

Sumoni Jhodia sits outside her hut in Siriguda village. There isn’t a trace of garbage around as far as the eye can see. Every home composts its waste. Siriguda has a school, a community hall, a fair price shop and a dam that they built themselves across a stream.

“My story isn’t just a story to be related over two days,” says Sumoni laconically. As she begins to talk we realise her story is epic.

Sumoni Jhodia, 60, is one of Odisha’s most prominent tribal leaders. She presides over the Ama Sangathan, a federation of several tribal groups. It produces brooms and deals in minor forest produce and other local products. Sumoni is also a member of the state’s Tribal Advisory Committee and part of the Kashipur panchayat in Rayagada district.

She was born into an impoverished family but her father, Ravi Jhodia, was a progressive man who sent her to school, which was 3km away. The long trudge forced the little girl to drop out after six months. She got married and her first child was born when she was 17.

In those days, tribal people in Siriguda village would run and hide in the jungle if they spotted a man dressed in shirt and trousers. They thought he was either a policeman or a forest official who had turned up to throw them into jail on fake charges of stealing minor forest produce. Or maybe he was a moneylender looking for tribals who were working for him as bonded labour.

Ramdhar Jhodia, the most literate man in her village, had studied till Class 9. He was working as a night schoolteacher with Agragamee, a local NGO. The elders in the village persuaded Sumoni to enroll. She was a shy young lady burdened with poverty, housework and child rearing but she decided to learn how to read and write.

At Agragamee she went beyond literacy. The NGO’s ‘leadership development’ programme gave her confidence and helped her see the exploitation her people were being subjected to. The NGO has backed her solidly all these years.

In 1991 she fought her first battle — against hunger. “Our income lasted for only six months. During the monsoon we depended on moneylenders for food. In return we worked for them for Rs 1.50 per day, when the minimum wage rate at that time was Rs 6 per day,” says Sumoni.

She talked the villagers into starting a grain bank. It would provide them food security during the monsoon and save them from the clutches of moneylenders, she reasoned. The men were sceptical but the women understood. Eventually everybody contributed 4 kg of grain. A village grain bank committee was set up with Sumoni and six others as its members. The grain bank now has 200 quintals of grain and fulfills its purpose. After opposing it for two years, the moneylenders joined it too.

When social mobilisation wins political support a lot can be achieved. So it was when Sumoni met the then Chief Minister Biju Patnaik in 1993. “We had held a meeting in Kalahandi district that was attended by 450 women from 10 districts. The outcome was a list of 10 demands. We sent this charter to the Chief Minister. He called 20 of us to come and meet him and he asked me to be part of his advisory team,” recalls Sumoni.

Demands that men and women be given equal pay, that local liquor breweries be banned, that village communities get rights over minor forest produce and that land be given to the landless were acceded to.

One of the most important outcomes was that the Chief Minister agreed to her demand that people should be informed of all development work to be carried out in their villages in Oriya so that they could oversee its implementation. 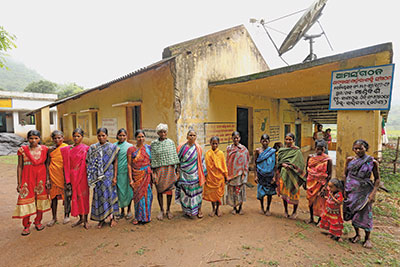 As a result, hundreds of village committees in Kashipur block were formed. They took up development works and ensured those were completed. This way there was no room for corruption. The government has paid people for their labour.

Implementing all that the Chief Minister had agreed to proved tough. “We were harassed at block and district levels. But we never gave up. We took out rallies, conducted meetings, submitted petitions and met officials. I once locked up the BDO’s (Block Development Officer) office,” she recalls with a smile.

Liquor breweries were a major concern for tribal women. Whatever little money they were saving was being handed over to the liquor mafia by their men. Biju Patnaik had agreed to a ban. Eight tribal women, including Sumoni, were given ‘special policing powers’ to keep a check on the local breweries.

But implementing the ban was easier said than done. Led by Sumoni, the women would hold rallies in the local market. This incensed the local liquor barons. Rati Majhi, the owner of one such brewery, threatened Aundhari Majhi, one of the women with special policing powers.

She filed a complaint at the Tikri police station. But the police took no action against Rati Majhi. Sumoni says she mobilised 5,000 women from the length and breadth of Kashipur block.  The women surrounded the police station in full force and demanded that Rati Majhi be arrested. The police was forced to round him up.

A bigger battle was to follow — the demand for minor forest produce. “You can say Sumoni started a civil disobedience movement,” says Divya Das, joint director of Agragamee.

At that time, the right to collect minor forest produce had been leased by the government to the Tribal Development Cooperative Corporation (TDCC) and private companies like Utkal Forest Produce. The Chief Minister had agreed in principle that tribal women would be given this right on condition that they organise themselves and register.

In those days Agragamee was training 40 women in carpet weaving. This group, called the Mandibisi Mahila Mandal, had registered themselves. One day, Hitmai Majhi, a tribal woman, approached them for help. She complained that her stock of grass, with which she made brooms to earn an income had been forcibly seized by officials of the TDCC and the forest department.

Twelve women of the Mandibisi Mahila Mandal along with Sumoni went with Hitmai to complain to the District Collector about this arbitrary action by the TDCC and the forest department.

The District Collector tried to negotiate. An offer was made to the women. The Mandibisi Mahila Mandal could buy the grass for making brooms. They would be given `2 lakhs for starting such an enterprise. But they would have to sell their brooms only to the TDCC with just a two per cent margin of profit.

The women said nothing doing. Instead they pooled the stipend they were earning from the carpet training course and bought 174 quintals of grass for making brooms. But TDCC officials turned up with the police and ordered the women to sign documents saying that they were selling the grass to TDCC.

The women point blank refused to sign. The TDCC officials then forcibly seized their entire stock of grass. The women tried to stop them by blocking the road. But, says Sumoni, the police cheated on them and the TDCC officials escaped with their grass.

The women filed a complaint at the Kashipur police station. All attempts at negotiation between the TDCC and the women failed. The Mandibisi Mahila Mandal refused to budge from its stand. Finally, their grass was returned. The government said it could consider giving the women the right to resell forest produce. But it couldn’t be restricted to just one Mandibisi Mahila Mandal.

Immediately all 12 Mahila Mandals of Kashipur block came together and formed one federation called the Ama Sangathan. They elected Sumoni as their president and got their new organisation registered and in 1995 the Ama Sangathan got the licence to buy, purchase and market brooms.

But the problem was not yet solved. The Ama Sangathan found itself confronted with another dilemma. According to rules, you needed to pay royalty to the government for selling minor forest produce. The government increased this royalty every year. So the first year the Ama Sangathan paid Rs 45,000. The second year it coughed up Rs 75,000 and the year after it was saddled with a bill of Rs 1,50, 000.

The irony was that the royalty levied by the government on bauxite was only `35 per tonne. So the state was allowing miners to take bauxite almost for free and charging tribals amazing sums for grass.

As word about Ama Sangathan’s success in making brooms spread, the movement for rights over minor forest produce expanded across Odisha.  During the agitation it came to light that the TDCC was not paying the royalty that it owed to the government.  The Utkal Forest Produce Company had been given 30 forest items on lease on condition that it set up a processing plant to generate employment and revenue. But it had not set up a single processing plant.

Finally in 2000, the Odisha government passed rules that gave villages in tribal areas rights over 65 minor forest produce items. Royalty was reduced to `100 and the money was to be paid to the local panchayat.

The Ama Sangathan, which started with 300 members, now has 1,200 members. It pays Rs 35 per kg for the grass for its brooms. Every day around 20 to 30 women come to the Ama Sangathan centre in Mandibisi to make brooms. They are paid Rs 70 to Rs 80 per day.

The Ama Sangathan also deals in sal leaves, cereals, mustard and turmeric. It processes dals. Till 2010 the sangathan used to supply dal for the public distribution system and for the school midday meal programme.

The Ama Sangathan continues to mobilise people to demand their rights. If things go astray they correct it. “We came here for five years. After 35 years we are still here. Issues never end,” remarks Achyut Das, director and founder of Agragamee.

In 2008 the Ama Sangathan once again imposed a ban on local liquor breweries. Under Panchayats (Extension to Scheduled Areas) Act, gram sabhas now have the right to regulate liquor shops. The sangathan first got the Mandibisi gram panchayat to pass a resolution against the liquor breweries. Other gram sabhas passed a similar ban.

Sumoni continues to lead. Recently she was invited to a meeting of the International Fund for Agricultural Development (IFAD).  She was told that IFAD plans to introduce coffee plantations under the Odisha Tribal Development Project. 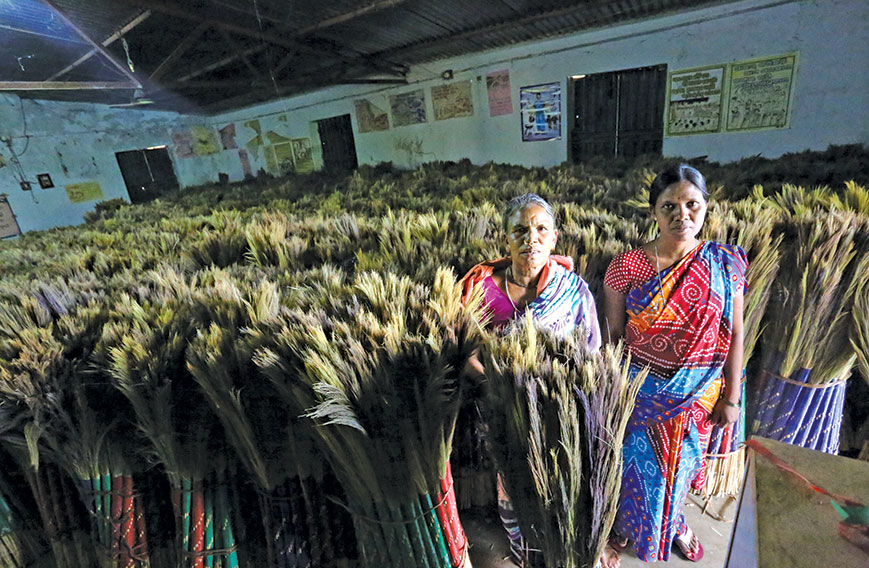 “I told them you are introducing coffee here but we will not be allowed to sell it. So are we supposed to eat it?  I am drinking coffee for the first time in my life in this meeting and it will be the last time,” says Sumoni. The plan for growing coffee was junked and agro-forestry was introduced instead.