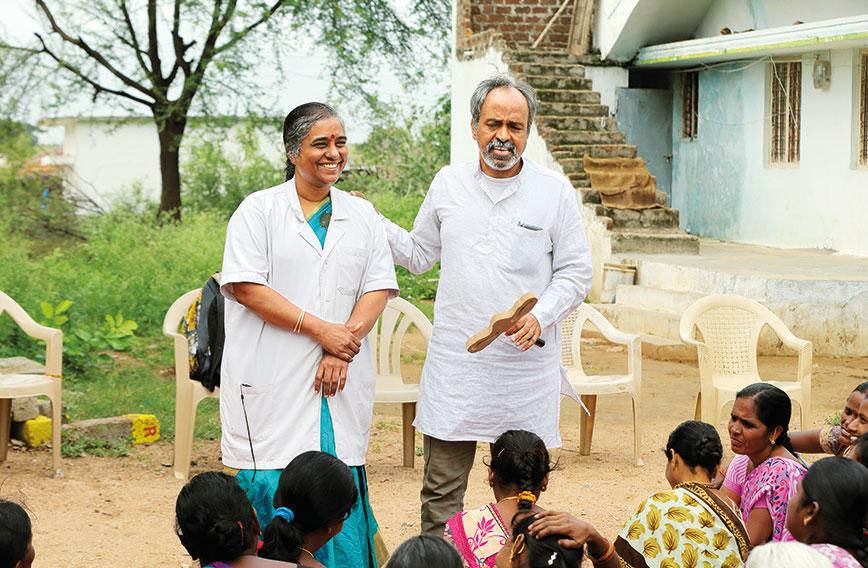 How best to spread the word about medical malpractices? Nothing can be better perhaps than getting doctors to talk about them and educate people about what is right and wrong.

Dr Prakash Vinjamuri and Dr S.V. Kameswari, a husband and wife team, have been doing just that, focusing on the pernicious practice of performing hysterectomies when they aren’t really needed.

The practice has been rampant in erstwhile Andhra Pradesh, now Telangana. Working in rural areas, Vinjamuri and Kameswari came across an increasing number of women whose uteruses had been removed at a young age. As they probed further, the scale of the malpractice shocked them.

Since 2001, they have reached out to thousands of women in the villages, telling them about the importance of the uterus, how to assess symptoms like a harmless white discharge and the very few conditions under which a hysterectomy is really needed.

If you sit in a district bus, every fifth woman doesn’t have a uterus, Dr Prakash Vinjamuri says to us quietly at the village of Vasalamarri, a  couple of hours by road from Hyderabad.

It is a stunning statistic, but Dr Vinjamuri and his wife, Dr S.V. Kameswari, should know. They are responsible and public-spirited physicians, who have since 2001 been educating rural women about the importance of the uterus and why it should not be removed except for the most compelling medical reasons.

What got them started back then was the discovery, while running a rural clinic in unified Andhra Pradesh, that all 300 women in a spinning mill had had their uteruses removed.

The doctor-couple initially found it difficult to believe, but as they probed further they discovered to their dismay that a large number of rural women, the majority of them in their twenties and even as young as 18, had been through hysterectomies. In many cases the ovaries too had been removed.

Widespread medical malpractice had condemned these village women to early menopause and ill-health. The unequal relationship between doctor and patient had prevented them from asking the right questions and seeking better advice.

The uterus and ovaries are essential to conceive and have babies. But they are also linked to the overall health of a woman. The ovaries, for instance, produce estrogen, a female hormone, the lack of which leads to heart problems, weakened bones and lack of libido.

The odd infection in the reproductive tract or white discharge or perhaps a little bleeding could have been easily treated. Instead, in the hands of manipulative doctors, women have been subjected to the violence of surgeries and left minus an organ so essential to  womanhood. 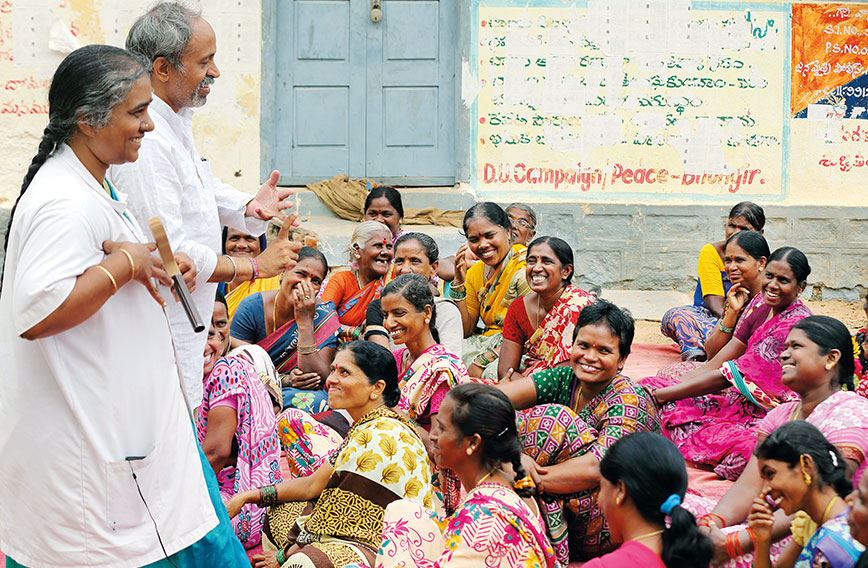 Engaging with the women and capturing their attention is important

Over the years, a few  million women in Andhra Pradesh, now split into Telangana, have perhaps been operated on wrongly. The exact number could be anyone’s guess, but without doubt it is huge.  Women continue to be victims of this malpractice because in the absence of awareness they get pushed into surgery by doctors who are either out to make money or just happen to get a diagnosis wrong.

For several years Dr Vinjamuri and Dr Kameswari campaigned in villages on their own. It was a meaningful but small effort. Given the size of the problem, working independently, they could at best have had a limited impact. However, they have now been enlisted by the Telangana government which had heard of their crucial campaign and reached out to them to work with the state health department.

The current programme with the government is for nine months and began in January 2018. For an awareness drive in Yadadri-Bhuvanagiri district, the government has drawn up a list of 72 villages, to be visited one by one.

“Every village is new to me but in a very short time I have to get connected. I reach out to the elderly and children. We begin by talking about food and what they are eating and move on to what they should be eating. The uterus is a sensitive issue and we can’t begin talking about it straightaway. We have to get the women thinking. In rural areas people start talking when they get thinking. We can’t straightaway talk science to them,” explains Dr Vinjamuri.

While Dr Vinjamuri gets the women engaged in a discussion, Dr Kameswari talks to them about their bodies and goes into details about reproductive systems. We watched the couple in action at the village of Vasalamarri, one of 12 villages that the couple was visiting in Thurkapally mandal, which has 23 villages. Even with the support of the state machinery, it is too much to visit each village.

Including the village of Vasalamarri, Dr Vinjamuri and Dr Kameswari had done 88 sessions with students, health workers, government functionaries and village women. They took a break in May when it is just too hot to be out in the open. But otherwise, every day it has been early to bed and early to rise and off to a new village.

From ASHA workers to village mobilisers and block coordinators, multiple functionaries of the government are now involved. While Dr Vinjamuri and Dr Kameswari take no money for themselves, their NGO, Life HRG, is reimbursed expenses such as car travel.

It helps to have the support of the government, but communicating with village women on matters of reproductive health is not easy. It won’t do to be academic or official or too casual, for that matter. The subject of the uterus, in particular, is extremely sensitive. It involves explaining bodily functions and many of the women who have wrongly had their uteruses and ovaries removed don’t want to hear about the mistake they have made. 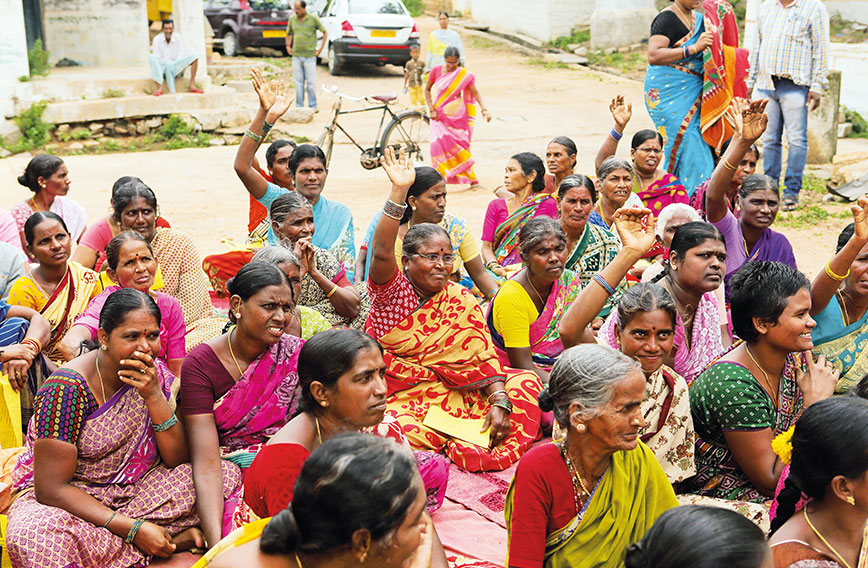 Women who have had their uteruses removed raise their hands

Dr Vinjamuri and Dr Kameswari have a great act going between them. Having spent long years of talking to rural women and getting them to view their empowerment in relation to the uterus, the couple know what to say and how to deal with the opposition they run into.

At Vasalamarri village about 50 women gather and sit on the floor in the open to hear the couple. The village coordinator has convinced them to stop the work they are doing at home and come here.

Dr Vinjamuri takes the lead. He begins by talking about food and the importance of nutrition. Like a scooter needs petrol and tyres air, the human body can’t do without food, he says. Women need to eat well to stay healthy. There are traditional greens all around which provide the body with iron and other nutrients. He plucks some from nearby and shows them.

Emphasising a balanced diet, Dr Vinjamuri gently takes up the topic of women’s reproductive health. Many of the problems they face are because they don’t consume the right foods. They would not have to go to doctors if they were careful about what they ate. It is because they don’t eat the right things that they have problems with their reproductive organs and end up in the hands of exploitative doctors.

Displaying a wooden replica of a woman’s reproductive organs, he talks about the functions of the uterus, the ovaries and the vagina. He holds the wooden replica over his lower abdomen. Dr Vinjamuri then asks the women listening to him how many of them have had their uteruses removed. About  one-fifth of the hands in the group go up. It is the same percentage that, he says, you would find on a district bus.

A  few of the women are very old. But mostly the women are in midlife. For us it is difficult to tell what they are going through or what age they are. We have been told by the doctors that the average age of women who have had their uteruses removed is 28.5 years. These women don’t look so young and so, perhaps, they have been through surgeries some years ago.

Dr Vinjamuri then launches into the subject of removing the uterus and that surgeries are needed only in a few cases. Just as he seems to be making good progress, a slightly stout and  elderly woman to his right begins making a ruckus. She and many others had their uteruses removed many years ago and so what is the point of this lecture, she wants to know. Dr Vinjamuri’s advice means nothing to her. Her banner of revolt prompts others to speak up. They want to know what they are supposed to do when a doctor tells them that they either have to remove the uterus or die. How do they make a choice?

As the questioning gets louder, Dr Vinjamuri is joined by Dr Kameswari. The women who don’t want to listen are told that they can leave. A good number get up and go and the audience is a little smaller now but all ears as Dr Kameswari seamlessly takes over from her husband. She gets into the specifics of gynaecological problems, which Dr Vinjamuri as a man could not take up. She talks about blood loss during periods, white discharge and smelly white discharge, spotting, bleeding while delivering a baby and so on.

She points out that many of the conditions for which uteruses are removed — such as white discharge — are really not cause for concern. White discharge can, in fact, be good as with bleeding. The only conditions in which the uterus must be removed are those in which the life of the woman is in danger such as heavy bleeding after childbirth or cancer. 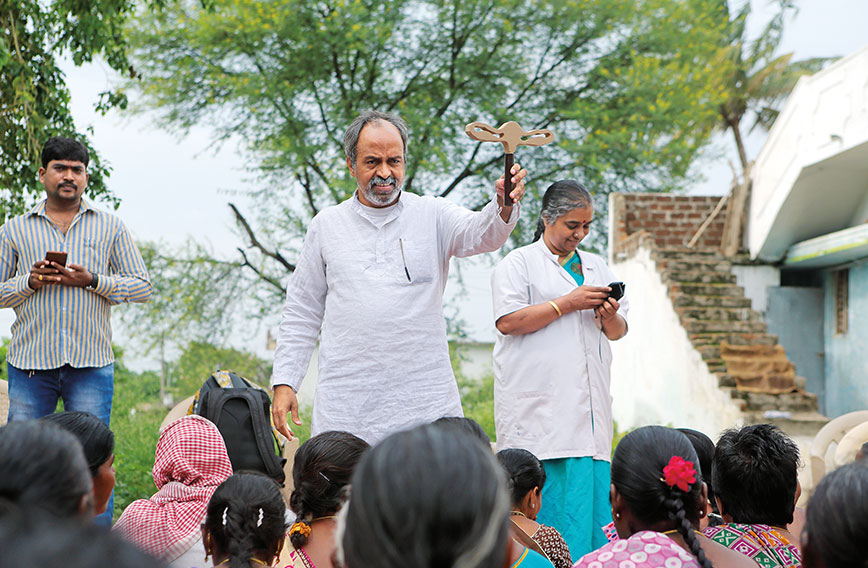 Dr Vinjamuri holds up a replica of the womb

“In any health issue, the government has a 33 percent role, the practitioner 33 percent and the patient 33 percent. We are making them aware so that they can play their role as patients,” says Dr Kameswari.

A study was done in Munipally block of Medak district by Dr Kameswari and Dr Vinjamuri with institutional support from the National Institute of Nutrition in Hyderabad. They looked at the cases of 173 women who had been through unindicated hysterectomies and had registered with their NGO. Additionally, a questionnaire was distributed among 265 women who had gone through hysterectomy or not.

The study goes into great detail, but the main takeaways present a worrisome picture of exploitation, poor medical ethics and the health of women. The average age at which hysterectomies were performed was 28.5 years. Of the sample, 60 percent had hysterectomies below the age of 30 and for them the average age was 24.6 years.

Other interesting findings are that the women were all married at the average age of 14. The first child was born at the age of 16.

In nine months they expect to cover a population of 200,000. But is that enough? Will government functionaries take over? It will be difficult to be as effective as the couple.

For one, they are both doctors. Dr Vinjamuri is also a gifted communicator and makes the audience laugh and answer questions. They also personalise their presentations, talking about themselves as husband and wife, and emphasising the importance of fidelity for sexual health. “I talk to them about myself and  say that I have only had sex with my wife. Multiple partners leads to infections and disease,” he says. For a bigger campaign to be impactful it will have to replicate much of this charisma.

Umesh Anand and Lakshman Anand travelled to Hyderabad and to Vasalamarri village with Dr Prakash Vinjamuri and Dr S.V. Kameswari