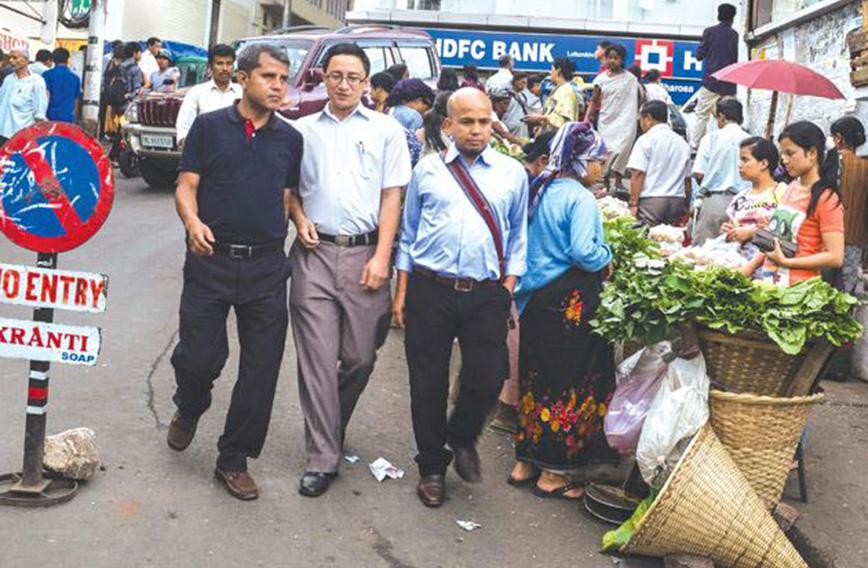 They found many discrepancies — the MLCU claimed to be associated with the United Evangelical Lutheran Churches in India and also claimed to be the owners of properties which actually didn’t belong to it.

The pastors have been champions of the Right to Information (RTI) law, showing how it can be used to bring accountability and transparency in government decisions. Their concern revolves around the standard and future of higher education in India. They dream of a just society.

Three pastors have set the Presbyterian Church in Meghalaya thinking about greater transparency in its decision-making and the importance of addressing the social concerns of the people.

Using the right to information (RTI) law, the pastors have had their Church annul an agreement with a private university and they have simultaneously  put a spotlight on the unregulated higher education sector in Meghalaya.

“The traditional conservative definition of a pastor is somebody who is confined to the four walls of the Church and to spiritual matters. But things have changed. I am professionally committed to the Church. But I can move beyond that and confront injustices in society. The Church needs to connect with larger society and subject itself to the same laws of accountability and transparency,” says Rev. Pyrtuh.

Rev. Pyrtuh was ordained in 2005. A Bachelor of Divinity from Bishop’s College, Kolkata, he is pastor of the Mawkhar Presbyterian Church, Shillong.

He is part of the Campaign for an Independent Lokayukta in the state. A founder-member of Thma U Rangli Juki (People’s Upsurge), he has been at the forefront of protests against the grabbing of raij or common land and the displacement of traditional farmers to build a New Shillong Township.

Rev. Sawkmie is a Master of Theology in Biblical Studies. He began his career as a pastor in Lapmala in the Jaintia Hills. Later, he joined the John Roberts Theological Seminary as a teacher of the New Testament. He now works as a Translations Adviser at the Translations Centre of the Bible Society of India in Shillong.

Rev. Lyngkhoi is the artist in the group. He is a painter, a musician, a singer and a songwriter.  A Master of Theology in communications, he works as a teacher at the John Roberts Theological Seminary.

Their story begins in April 2005. At that time the Khasi Jaintia Presbyterian Assembly (KJPA), the administrative body of the Presbyterian Church in Meghalaya, entered into an agreement with the National Lutheran Health & Medical Board to start a private university named the Martin Luther Christian University (MLCU) in Shillong.  Later that year, the state government formally notified the university.

The MLCU was, at first, warmly welcomed. The university promised much. The Presbyterians, including its elders and clergy, were initially optimistic. It would improve standards of higher education in Meghalaya and carry out high quality research, it was believed. It was the general opinion that such a university was surely needed.

However, as time passed, a feeling of unease developed about the university. “We felt it was not running as per our mission and vision,” says Rev. Pyrtuh. “So we began questioning them about the way they were functioning”.  But the university stonewalled all such questions.

So, Rev. Pyrtuh, Rev. Sawkmie and Rev. Lyngkhoi, joined by four more pastors, began scouting around for answers. Then they made a startling discovery.

The MLCU had claimed that it had representation with the United Evangelical Lutheran Churches in India, based in Chennai. Thinking that the MLCU was thereby linked to a sister Church, the Presbyterian Church had gone ahead and signed the MoU (Memorandum of Understanding) with them in good faith. This gave the MLCU a huge advantage. It now had the blessings of the Church, its name and goodwill. As a result the new university’s credibility among the people got boosted.

But the pastors found out, through their queries and interactions, that the United Evangelical Lutheran Churches in India had no knowledge of the agreement with their Church which they had supposedly been a party to. In a straightforward reply, the United Evangelical Lutheran Churches in India stated that they had “no correspondence or meeting to establish the university” and were “not aware of the MoU which was executed in April 2005,” and that the whole business had “become a private affair”.

Shocked at this revelation, the pastors probed further. “We did not stop there. We began inquiring from every public authority linked with the university. We approached the governor, various state departments and the university itself.”

The MLCU remained tightlipped, refusing to part with information or delaying matters. The pastors made many visits to the State Information Commission. A cabal of powerful people within the Church and in society tried to dispel any concerns.

At the KJPA’s biennial Dorbar held in April 2011, the pastors decided to make their findings public. They published a pamphlet and distributed it to the delegates. It caused an uproar. Many of the people at the Dorbar, just could not accept the findings. The pastors were attacked for using the RTI. It was seen by some as a profane thing to do. But the Church took it seriously and formed a commission to inquire into what the pastors had revealed.

“Initially it was tough,” admits Rev. Pyrtuh. “We even got letters condemning us. But the people soon began to understand what we were trying to do. We got support from the Church too.”

Almost immediately after the Dorbar and the press coverage surrounding it, MLCU lawyers served legal notices to the pastors for defamation, asking for a sum of Rs 10 crore in damages.

Instead of becoming defensive, the pastors responded by filing more RTIs and seeking even more information about the MLCU. Many revelations came to light.

RTI applications revealed that the MLCU had falsely claimed properties that legally belonged to the KJPA.

Even before consolidation of their permanent campus, the MLCU had broken UGC rules by opening off-campus centres. In complete violation of norms, the MLCU had started granting affiliation to colleges and institutes within and outside the state.

The MLCU was given money to set up a North East Career Institute that would coach aspirants for the civil service exams. People were happy thinking that their children wouldn’t have to travel to Delhi for coaching.  But nothing happened and now there is a CBI inquiry against the university.

The UGC has repeatedly issued directives to MLCU, the last on 7 June 2012, to comply with its rules and regulations. “But they don’t want to follow any regulations, not even state regulations,” says Rev. Pyrtuh.

Again through RTI, the pastors found out that the university administration had filed a writ petition in the Guwahati High Court’s Shillong Bench seeking exemption from UGC norms. The university claims to be self-financed. Hearing about this the pastors, fearing for the future of higher education within the state, were allowed to implead themselves in the case in the Shillong High Court. They are today providing vital information to the court.

They are also co-petitioners in an ongoing litigation in the Meghalaya High Court about the regulation of private universities in the state.

Their efforts have met with success. The KJPA has now disassociated itself from the MLCU. The MLCU Act 2005 was also amended so as to enable the Church to withdraw from this partnership in the last session of the Meghalaya Legislative Assembly in June 2014.

The pastors have been united in their vision of “building a just society” and have consistently called for transparency and accountability, both inside the Church and outside it. These pastors are also committed to reinterpreting the Bible in accordance with this day and age, using it to challenge oppression and everyday tyrannies. For them the greatest sin is to dehumanise someone.

“The power of the people will bring down the impenetrable walls dividing the rulers from the ruled, the rich from the poor and the denial of access to basic needs,” said Rev. Pyrtuh at a national convention on RTI held last year in Shillong.

The actions of the pastors have won them support from the laity of the Church and the people. But because they continue to ruffle feathers in the religious establishment and the secular establishment, they have become targets of vested interests. Unfazed, the pastors remain firmly committed to setting new standards for the Church and society.