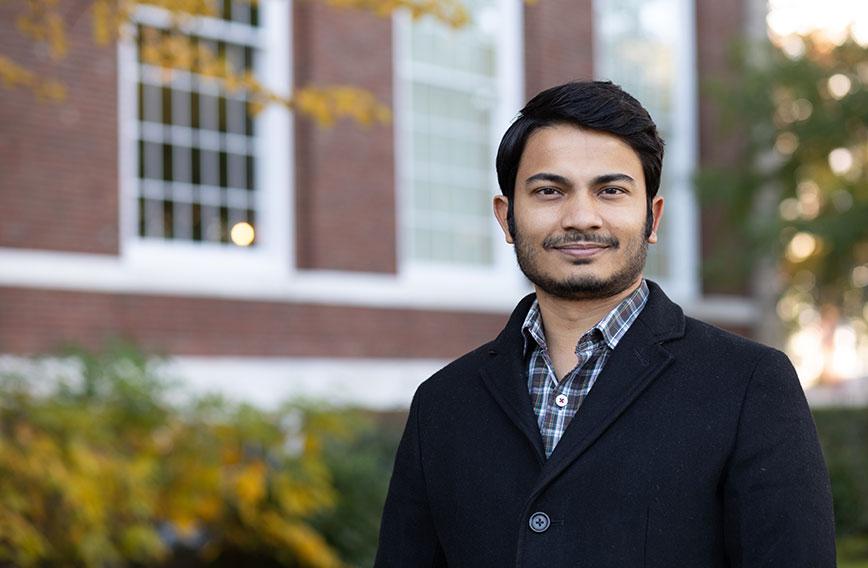 Chinmay Tumbe: 'This is an opportunity to fast forward the one nation, one ration card scheme'

‘We need an inter-state migration council’

MIGRANT workers have been at the core of the Indian economy. People from villages work in cities and industrial hubs to send money back to their families. It is a complex equation between urban and rural, which has received little public attention until the coronavirus pandemic and subsequent lockdown resulted in tens of thousands of migrants falling out of jobs and making desperate efforts to get back home.

Chinmay Tumbe, who teaches at IIM Ahmedabad, has for long studied migration in India closely. He has also been a member of the Working Group on Migration set up by the Union Ministry of Housing and Urban Poverty Alleviation. Civil Society spoke to him on the many complexities in migration and how the role of such workers can be formalized.

Migrant workers have left cities in droves due to the lockdown. What do you see as the likely impact on the economy in general and cities in particular?

I think once the lockdown is lifted you will see two responses. First, those who wanted to go home but couldn’t, will go back. They are desperate to return to their villages. Two, because of this mass exodus, you will have a shortage of labour in a variety of sectors including manufacturing. The shortage will be across industrial hubs, cities and urban agglomerations. That means you will see some wage spikes because of the shortage of labour.

Again, that depends on how many firms are going to be alive and in what capacity they start production. But overall, a labour shortage for a variety of sectors from drivers to loaders to even the logistics sector will make it tougher for the economy to resume its potential.

Typically, workers go back anyways after June for the sowing season. If you see the migration calendar of India — especially of semi-permanent migration — these are people who spend nine to 10 months outside and two months back home. And those two months are typically June and July, the monsoon.

My guess is that a lot of migrants will wait it out (in their villages) till the monsoon is over because they will think things are so uncertain right now. They will eventually come back. But, in the short term, there is going to be a labour shortage.

So, in terms of restoration of essential economic activity, which would generate money, jobs and so on, we are looking at a hiatus.

I think the coming months are going to be really bad in terms of resuming some sort of economic activity essentially because of the shortage of labour.

In villages there isn’t much to do in April and May either. You will have deficient labour in cities and surplus labour in villages. Overall, it’s a bad situation to be in. That’s why the only safety net is a direct payout to workers as social security. Which is what the government has announced but I think it should be much more.

Given the important role migrant workers play, how can their role be better formalized?

The burden of formality is really on the employer. The majority of migrant workers are employed in small and medium industries, which obviously want to skirt rules. It’s tough to impose rules top-down.

Workers would love social security of the right kind. But, from experience, workers also prefer informality because it means they can go back home anytime. Many times they prefer to work in such jobs because of the informal relationship. So there are preferences on both sides. It’s not just a story of exploitation.

From a policy perspective, what we have found over the past 10 years and a myriad people in the world of migration have been advocating for in India, is to have a more universalized kind of social security. Or portability of social security programmes. That has started kicking in with
the health insurance scheme that has been announced. In theory you can access it anywhere if you have a card.

The most important form of social security in India is the Public Distribution System (PDS) and that works only in your state. Until a few years ago you could access your rations only in the village where you are domiciled. If you went to another district you wouldn’t be able to access the PDS.

After a lot of policy advocacy by several organizations and people working on migration the Ministry of Consumer Affairs, Food and Public Distribution has been piloting portability of the ration card. The big announcement made in February, before the pandemic, was ‘One nation, one ration card’.

This is a very important scheme. The core reason it hasn’t been fielded is the fiscal math. The thinking is, why should the Maharashtra government pay for work being done by Bihari workers? Some compensation or basically fiscal coordination between the states is needed.

This crisis is an opportunity to fast-forward the one nation, one ration card scheme. It was slated to start in June. People are saying it will be postponed because of the pandemic. I think we should start right now. We are, in any case, giving rations to people irrespective of domiciled status, due to the crisis.

This is basic security. People can then get access in any state to subsidized food and other benefits, which can be included in the ration card.

You probably need an inter-state migration council just like for GST there is a council to resolve inter-state issues. This is the one big idea that can emerge from this crisis. We should go into overdrive and not wait till June because then migrant workers don’t need to go back and we can tide over the shortage of labour.

Do you think there is scope for a policy that would incentivize employers to formalize the informal nature of employment?

It’s a tough trade-off. A lot has been written about this issue in the last 30 years. Our experience is that when we try to enforce top-down measures the outcome is the inspector raj and the labour raj. We know that an entire economy has been built around this. In theory, I would say you are right. The informal sector has to be formalized. On the ground, however, the inspector raj system imposed by the government does not work in practice and leads to all kinds of strange distortions.

I think a smarter way is to incentivize employers by giving tax concessions if a firm actually provides workers all benefits. An award-based system, rather than an inspector raj. If a guy is going to start a small powerloom shed, say, in Surat, employing 15 to 20 workers, which is the standard mode over there, and he has to begin thinking about all the things he ought to be doing, there is a lot of  bureaucratic cost involved in that.

Workers send remittances home. How much does this work out to and does it have an impact on the village economy?

My first work published in 2011 was on India’s remittance economy. These numbers are huge in proportion to GDP. Of course, there are domestic remittances and international remittances.

In Kerala it works out to 30 percent of GDP. I have estimated that 150 to 200 of India’s districts can literally be classified as remittance economies either from outside India or inside India.

I have also argued that this isn’t a new phenomenon. These districts have been remittance economies for more than 100 years. So there is a culture of out- migration and remittances.

Are these remittances fundamentally transforming regions?

But in the west coast region the remittance economy came in conjunction with better education and governance and transformed the region. So remittances are a game changer but when combined with other parameters.

Another example is Udupi, which is even today a remittance economy. Most migrants run Udupi restaurants. They go back after having worked all their lives in restaurants across India. They keep sending money so a huge part of Udupi’s economy is fuelled by remittances.

You can look at Udupi and think, if so many people are leaving something must be wrong. But actually things are quite different. Udupi is not a basket case of poverty. It ranks second after Bengaluru on the human development index in Karnataka.

Upward mobility among migrants has been fairly dramatic. So the first generation of migrants got low-level jobs. Migrants themselves invested in education both at source and destination. In Mumbai they used to have night schools and so on. That’s how each generation started coming up and so today they migrate for different jobs.

It is very similar to Kerala. The migrants who used to go to the Gulf from Kerala were very different. It’s not anymore just a labour class kind of story. Kerala’s entire economy has been transformed in the last 30 years through remittances. Keralites don’t do low-end jobs anymore and that’s why over two million north Indians now migrate to Kerala to do those jobs. So remittances are fairly powerful, but only in conjunction with other factors.

How can states and cities work in synergy to smoothen migration from village to city and back? Do we have any mechanism for such coordination?

There has been some interesting inter-state coordination. One document to look at is the January 2017 Report of the Working Group on Migration of which I was a member. It had eight ministries involved and it has an appendix, which includes an MoU between Tamil Nadu and Odisha with a focus on workers in the construction sector.

Entire families migrate and children drop out of school. So the specific concern was that kids weren’t entering the virtuous cycle of education because of migration. The medium of instruction in Tamil Nadu schools is also different.

The two states entered into a partnership to register workers, provide facilities, schools, and instruction in the Odia language. Children of migrant worker families are now sitting for exams as per the school calendar. This is a creative solution inspired by non-profits. I think Telangana and Odisha have a similar agreement.

In the current crisis, the UP government is keen to know how many of its people have migrated to Gujarat for work. There aren’t any up-to-date figures. This is another lacuna in the world of migration. The 2011 Census figures are all we have and those were released just six months ago.

I think this is the time for an inter-state migration council. You don’t even need a constitutional amendment. You just need a committee. States should know, at any given point of time, how many of their people are in other states, how many are on a roll and so on. This would be important data especially once the one nation, one ration card programme becomes operative.

I think this would be on the cards this year if the government is serious about coming out with a policy.

Do you see UP and Bihar developing due to migration?

As I said, (development comes) in conjunction with other factors. The remittances are useful at the household level but you need much more investment in the source region to activate development.

Many times migrants’ associations in the city play a useful role. Dadri, for example, has village-level associations which were instrumental in getting mobile towers to the nearest village and activating development. So, is leveraging remittances to activate development happening in UP and Bihar? Less evidence. But in both states migration takes place from relatively better-off districts. In Bundelkhand there is less migration compared to eastern UP.

In Ratnagiri, which is an out-migration hotspot (on the west coast), the richer tehsils send out more migrants. To migrate you also need some capital to live in the city for 10 months. There is a class of seasonal migration for two or three months like construction workers but that is not the dominant form of work-related migration in India. n