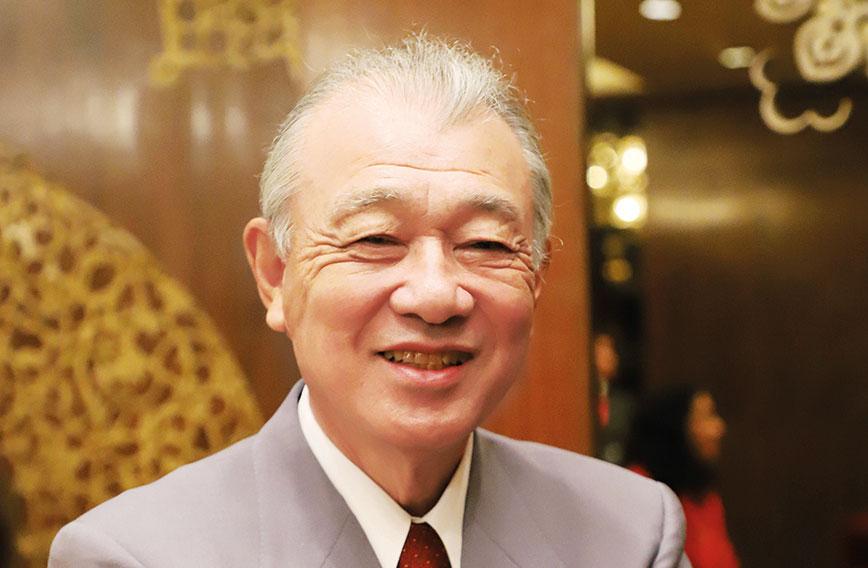 Yohei Sasakawa: ‘Young people from leprosy colonies are starting small businesses and are seeds of change’

Every year, on World Leprosy Day, Yohei Sasakawa makes a Global Appeal to end stigma and discrimination against people affected by leprosy. He has been doing this for 13 years with the same passion with which he first took up the cause of leprosy and the  ostracism associated with it.

Sasakawa is chairman of the Nippon Foundation. Since 2001, he has been the WHO Goodwill Ambassador for Leprosy Elimination. He was conferred the International Gandhi Peace Prize by the Government of India in 2006.

This year’s Global Appeal, made from New Delhi on 28 January, had added punch because it was delivered in partnership with Disabled Peoples' International (DPI) which has an outreach in more than 130 countries. Thus far, the struggle for the rights of people affected by leprosy was a lonely one.

People with leprosy have been embraced by the disabilities movement. From now on they will jointly fight to end the stigma and discrimination associated with leprosy. “Nothing about us, without us,” is their slogan. It is an outcome that Sasakawa has been encouraging.

Javed Abidi, Global Chairperson of DPI, said the first issue on their table is getting discriminatory laws against those who get leprosy, repealed. A series of such laws, from the Special Marriage Act to the Life Insurance Corporation Act, discriminate against them. A new law, Elimination of Discrimination Against Persons Affected by Leprosy (EDAP), was drafted by the government in 2015 and is now languishing.

India has about 60 percent of the cases of leprosy globally. India’s National Leprosy Eradication Programme, the largest in the world, tackles prevention and detection of leprosy, going door-to-door in villages.

India had achieved the elimination target set by the World Health Organisation (WHO) in 2005 but new cases continue to be detected. The disease can be treated with medicines but the person who is cured remains a social outcaste because of the stigma attached to the disease. People who contract leprosy are forced to live in dilapidated colonies away from villages or urban areas and often beg for a living.

The Sasakawa Foundation works for the welfare of those affected by leprosy by providing education, skill-training, medical help and by fighting discrimination.

Sasakawa says his dream is to build an inclusive society and demolish the walls that separate blighted colonies from the world outside. While in India, he travelled to Jharkhand and states like Uttar Pradesh (UP) and Maharashtra, where there is high incidence of leprosy, to assess progress on the ground.

Civil Society met Sasakawa, who speaks through an interpreter, in New Delhi for an extended conversation.

This is the 13th Global Appeal to end stigma and discrimination against people affected by leprosy. Have we achieved some success?

The uniqueness of leprosy is that it has existed for thousands of years. The word leprosy appears in the Bible, in the Old Testament. This is the only disease with discrimination stretching back to thousands of years. Once a person was diagnosed with leprosy, he or she would be ostracised and abandoned by family members either on an island or in the middle of a desert or up in the mountains. This kind of situation is quite unique to leprosy.

Since 1995, medicine to cure leprosy is being distributed free of cost. If the person who gets leprosy can access this medicine at an early stage he or she can be fully cured without developing the disability associated with the disease.

What are the social successes?

Changes are happening within societies. There is a certain storyline behind our Global Appeal. We felt, not only myself but people working in WHO, that treating the disease was going to solve the problem. But it was not so because society strongly discriminates against people who contract leprosy even if they are fully cured of the disease.

Old laws exist, prohibiting those who were affected by leprosy from getting on a bus or a train or going to various areas. If one’s spouse was diagnosed with leprosy, one could even get a divorce. So, we realised treating the disease won’t help. Laws and customs still exist in society that discriminate against people affected by leprosy.

That’s why I took this up to the United Nations. As a result, we were able to get support from 193 member-countries to pass a resolution on elimination of discrimination against persons affected by leprosy and their family members in the UN General Assembly in 2010 together with principles and guidelines.

My help alone is not going to propagate this information. I needed to work with Nobel Prize Laureates, religious leaders, political leaders, scholars, medical groups… to further this knowledge so that society becomes aware that leprosy is no reason for discrimination. This kind of cooperative effort led us to issuing a Global Appeal. We felt it would be an effective tool to fight against leprosy.

Media support has been critical for propagating awareness. With their help we were able to inform the public about what was happening in the colonies. I will be visiting Jharkhand and what I always do is take journalists along so that they can see with their own eyes the situation on the ground.

It’s a difficult problem to deal with. Beyond media what are the subtler, quieter initiatives?

The thing is that leprosy is such an old discriminatory practice that it has become embedded in people’s DNA. They believe that it is dangerous. Despite medicine to treat it people are still stuck with the old thought process. Its an obsolete mindset.

In order to get rid of this bias we are working quite a lot on education. At the same time, we are encouraging people affected by leprosy to live in a self-sufficient way so that they gain the confidence to live on their own.

I mean they have actually been discriminating against themselves. They have given up on living because of stigma and discrimination. So, they need to get back their confidence and believe that their lives are worthwhile and they have a right to be living on this earth.

The situation is changing. Young people from colonies where people affected by leprosy live, are starting small businesses. Due to that activity people living around the colonies who don’t have leprosy are going back and forth and having more relations with the people in the colonies. Some people now get married to non-leprosy people. So this is the change we have observed.

Do you think young people who don’t have leprosy, but come from leprosy-affected homes, are key to changing attitudes? What could be done to speed up this process?

I am travelling to various rural areas in Bihar, Odisha, Maharashtra and UP. In the course of visiting these areas I will meet officials of these states so that I can help them bring down the number of leprosy people who are begging to zero.

The state governments have supported our efforts and are gradually increasing the special allowance for persons affected by leprosy so that they can live self-sufficiently within the community.

Self-sufficient living is going to be key. We provide vocational training to the second generation living in the colonies so that they can work and earn money. They are enthusiastic about becoming leaders and representing the colonies.

These young people will be key to changing society so that the painful past is not repeated. They are enthusiastic and passionate. Their numbers are not large,  but they are the seeds of change.

The downside of human beings is that they always want to discriminate against someone. Young people will have to face it, rectify it and contribute to changing society. If I see that, it will make me absolutely happy.

My final goal is to demolish the walls that separate the community from the colonies. This means integrating persons affected with leprosy with the rest of society. In some areas that has already started. Some people outside the colonies are moving in to live with the people affected by leprosy. So, if that happens more often then the mainstreaming of people affected by leprosy can be done.

In your Global Appeal, you have associated closely with the disabilities movement. Will the emphasis change from seeing leprosy as a disease to seeing it more as a disability?

By forming APAL, we were able to come on equal ground and talk to the disability rights groups. When I mentioned this to Javed Abidi of Disabled Peoples’ International (DPI) he said that a person with leprosy is also a person with disability so why aren’t they joining DPI? So that led us to work with them for the Global Appeal.

Not yet, but it is not zero. Some years ago, I was very impressed visiting one of Tata Motors’ vendor's in Pune. In this vendor's factory around 50 to 60 people employed were persons affected by leprosy. Some of them did not have fingers but they were able to do press work in this factory for Tata Motors.

So there are companies who have the courage to hire people affected by leprosy. If the media covers this example, other companies will come to know.

In Japan, private companies are required by law to hire 2.3 percent of their staff from people with disability. This is to be achieved by March 2021.

A lot needs to be done but the law is actually helping the disabled get jobs. In Japan, government offices have been doing this even before it was extended to the private sector. The private sector, too, had set this target on their own before the law stipulated this percentage.

Is there a fall in the number of new cases?

Actually, in the case of India, the number is growing. But there is a reason for this. WHO had set the elimination target at one patient out of 10,000. Once a country achieves this objective, they call it an elimination achievement.

Many countries have been successful in achieving the elimination goal. However, after these countries achieve this goal if they see a rise in new patients they get cagey. Officials feel the central government will criticise them for not doing a good job.

The person in charge of the leprosy programme starts manipulating the number of new patients so that it stays flat at one per 10,000.

But I have started telling people that a rise in new patients is a good thing because there is medicine free of charge that can cure the disease. Why not find patients at an early stage so they can be fully cured? An increase is not a bad thing.

India is one country that has taken action on this. They have begun to propagate that there is a cure and new patients should be found. This action has been led by Prime Minister Modi. A rise in the number of patients means you are finding new patients and doing a good job. As a result, last year India witnessed an increase of 8,000 new patients. Why hide leprosy when there is medicine to cure it.