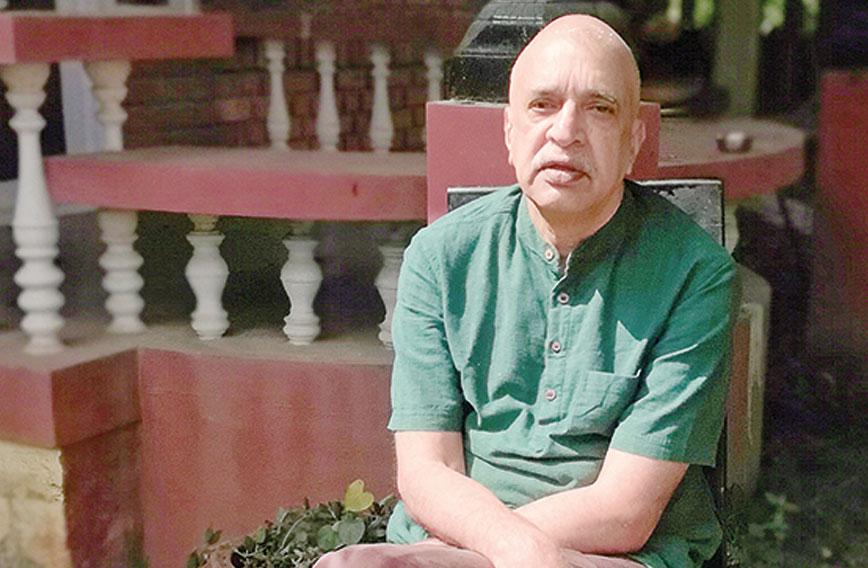 ‘Let Ayurvedic doctors be surgeons but train them’

AYURVEDIC doctors trained as surgeons in Ayurvedic colleges have been allowed by the government to perform 58 types of surgeries to make up for the lack of surgeons in India.

The decision has led to an outcry by allopathic doctors with the Indian Medical Association (IMA) saying it will lead to ‘mixology’ and quackery, which the public healthcare system could do without.

The fact is that surgery began in India with Sushruta whose treatises form the basis of Ayurveda. Present-day Ayurvedic doctors also study surgery at the master’s level in Ayurvedic colleges. But does that make them good enough to practise?

Darshan Shankar, who has spent a lifetime building bridges between western science and traditional medicine, strikes a note of caution. He says better infrastructure and training are needed in Ayurvedic colleges before the surgeons are treated as the equivalent of general surgeons, as the government has suddenly envisaged.

But India is short of surgeons and modern medicine owes a debt to Ayurveda. Instead of denying Ayurvedic doctors the right to practise as surgeons, they should be trained better and used to bolster the public healthcare system.

Excerpts from an insightful interview with Darshan Shankar, who has founded the Institute of Ayurveda and Integrative Medicine (IAIM) and the Trans-Disciplinary University (TDU) in Bengaluru.

Do you think Ayurveda physicians trained in surgery should be allowed to practise as surgeons? Surgery, after all, began with Sushruta whose treatises form the basis of Ayurveda.

It’s true that Ayurveda is a knowledge system that has given surgery to the world. The Burroughs Wellcome Library in London, which chronicles the history of medicine, has the Sushruta Samhita — which is an entire treatise on surgery. It is the palm leaf version that has been preserved. Even as late as the 18th century there is evidence that the techniques of plastic surgery were exported from India to Britain.

Historically, I would say there is a global debt that surgery owes to Ayurveda. The surgical world is obligated to revitalize surgery in Ayurveda.

At the bachelor’s level, the Ayurveda physician learns minor surgery just like in the MBBS course...

What is minor surgery?

Cuts, wounds, sutures. They don’t enter operation theatres (OTs) but minor OTs. At postgraduate level the MBBS and the Ayurveda graduates start at the same point. They don’t have a background in surgical practice.

It is the master’s degree course in surgery that trains the allopathic surgeon in general surgery or whatever he or she specializes in. It is similar in the case of Ayurveda. In my university I have looked at the master’s courses in allopathy and Ayurveda. We have compared the curriculum. We find that over 90 percent of the curriculum is the same. In Ayurveda they have used Sanskrit words with their allopathic terminology in brackets.

The element which is different in Ayurveda is that it includes features of pre-surgical and post-surgical practices which are very interesting. I think that if you look at such procedures objectively, you may find that allopathic surgery can benefit.

However, the training for both streams is very different. The infrastructure for teaching surgery at postgraduate level in Ayurvedic institutions is certainly much poorer than the infrastructure and human resources available in allopathic medical colleges.

Therefore, although they have the same curriculum, the training imparted to a modern surgeon is far superior compared to that imparted to an Ayurvedic surgeon. The reason is that the infrastructure in Ayurveda colleges is not of the same standard as modern surgical colleges.

Theoretically, both learn the same curriculum. But in practicals the Ayurvedic surgeon does not get the opportunity to practise during the course of his training with the same exposure that the modern surgeon gets during his master’s degree.

The situation varies from state to state. In Maharashtra the state has passed a gazette notification similar to the recent one passed by the central government saying that Ayurvedic surgeons can practise to the extent of their training. The training is, of course,  decided by the curriculum. As a result, several colleges in Maharashtra improved their infrastructure and you now have surgeons graduating from colleges in the state who do surgery almost on a par with modern surgeons.

I have a friend who is a master’s in surgery from an Ayurveda college who practises in Raigad-Ratnagiri district. The state government has appointed him district surgeon because there is such a huge shortage of surgeons in India. People from all over the district come to him and he does a fantastic job.

What kind of surgeries does he do?

He does all general surgeries — appendix, gall bladder, hernia and so on. Laparoscopy too.

Is this the case with all those who graduate in surgery from Ayurveda colleges?

No. I think theoretically they know the range of surgeries but in practice most Ayurvedic surgeons restrict their surgical practice to the anal-rectal region. Even allopaths advise patients with an anal-rectal problem to go to an Ayurvedic hospital. So even though the curriculum is the same, for lack of training, the Ayurvedic surgeon is not equipped to practise from day one.

But this is a ridiculous situation. You teach them the entire curriculum that an allopathic surgeon learns yet despite an acute shortage of surgeons you don’t train them adequately.

So you feel concerns over allowing Ayurvedic surgeons to practise are not unfounded?

They are not unfounded for day one.

Do you think it’s a good idea?

I think it’s an excellent idea and an extremely important one. It’s very important for India’s public health system. We are acutely short of surgeons. The IMA should welcome this move. They should be constructive and offer to work with Ayurvedic centres and strengthen their infrastructure and training. After all, 500 surgeons graduating annually would be an asset to the world of surgery. Actually, we need hundreds of thousands of surgeons. Instead, there is a very peculiar politics of medicine at play.

In my hospital I have three Ayurvedic surgeons. I find it absurd that they have spent three years learning surgery and they cannot practise general surgery. We have good infrastructure in our hospital. Yet every time a surgery has to be done, I have to invite modern surgeons to participate.  I do so willingly because I want my surgeons to build capacity, but I find it humiliating.

Why have a three-year course in surgery if an Ayurvedic surgeon can’t practise after that. On day one I would not advise that Ayurveda surgeons be allowed to practise until they undergo adequate training. But Ayurveda deserves to participate in surgery. It gifted surgery to the world and now the world must come forward to create a level playing field.

What is the infrastructure that Ayurveda colleges lack?

The teaching staff for a postgraduate programme in Ayurveda surgery must include trained surgeons and anaesthetists. In addition, it should have OT nurses, OT technicians and a resident surgeon. The unit should also have staff trained in BLS (basic life support) and ALS (advanced life support) systems.

With such infrastructure and human resources an Ayurvedic surgical unit should certainly be able to handle emergencies with the same competence as an allopathic surgical unit.

Such capacity can be rapidly built in Ayurveda surgery teaching hospitals if there is active cooperation from the larger surgical fraternity which is currently mostly  located in allopathic hospitals.

Would regulation be needed and who would provide it?

Regulation for Ayurveda surgery must be exactly the same as for allopathic surgery. Ideally, the National Medical Commission for allopathy and AYUSH should create a common regulatory framework and a common register for licensed surgeons.

Today, this is not the case. The registers are different. However, since health is a state subject, state governments can  create a regulatory framework and a register which is common for all surgeons. The country should not have separate regulation for Ayurvedic surgeons and allopathic surgeons. This synergy across Ayurveda and mainstream surgery is not administratively difficult to achieve, if the narrow politics of the IMA do not vitiate the scene. India is woefully short of surgeons and constructive collaboration is needed for public health.

Some of this comes out of a feeling among ordinary people and allopathic medical practitioners that what comes from Ayurveda is not science. You’ve spent your life building bridges between western science and Ayurveda as a science. What needs to be done?

Now here is India with a heritage that understands change happening at a systemic level. Therefore, a combination of molecular approaches and systemic approaches is very important to understand biological change. How a cell behaves is not how a tissue, an organ or the whole system behaves. You cannot extrapolate.

We are in the middle of the COVID pandemic and this is what everybody is grappling with. We don’t know how the system as a whole behaves.

That’s right. I was in Norway a few years ago. I was talking to the head of their government medical system. They are far more open-minded there. He said all that allopathy is good at is managing acute conditions, emergencies and surgeries, not understanding systemic imbalances. Allopathy looks for systemic immunity in a limted way using vaccines. Instead, you have to make the system resilient, which is what Ayurveda does.

You have post-COVID clinics today which are struggling to deal with symptoms that persist in patients.

I think allopathy’s forte is in dealing with acute conditions, including COVID. Single molecules are good for an acute condition. If you want to relieve pain you want one molecule which is the analogue of a plant, actually. You extract morphine or its analogues. You can use it for short durations because such molecules are very powerful. For post-COVID what we are seeing are systemic disorders. Allopathy doesn’t have the capability to analyze or deal with them.

Your hospital in Bengaluru has worked with innumerable cases dealing with nervous disorders. What is your experience?

The entire turnover of the Ayurveda sector is around `70,000 crore per annum, mostly from private clinics, hospitals and industry. The government is a smaller player, as in allopathy. Its investment in allopathy is 1.5 percent of GDP. The actual spend on western medicine is 4 to 5 percent. The rest is happening in the private sector. It’s the same in Ayurveda.

It is citizens who are spending on private clinics, hospitals and non-profits. This is their health-seeking behaviour. Take our hospital. It’s self-financing. People come on their own for muscular-skeletal disorders, strokes, Parkinson’s, skin conditions, gastro-intestinal imbalances, irritable bowel syndrome. I mean, why do they come? Some of the richest people in the city who could go anywhere in the world, come here because they want relief.