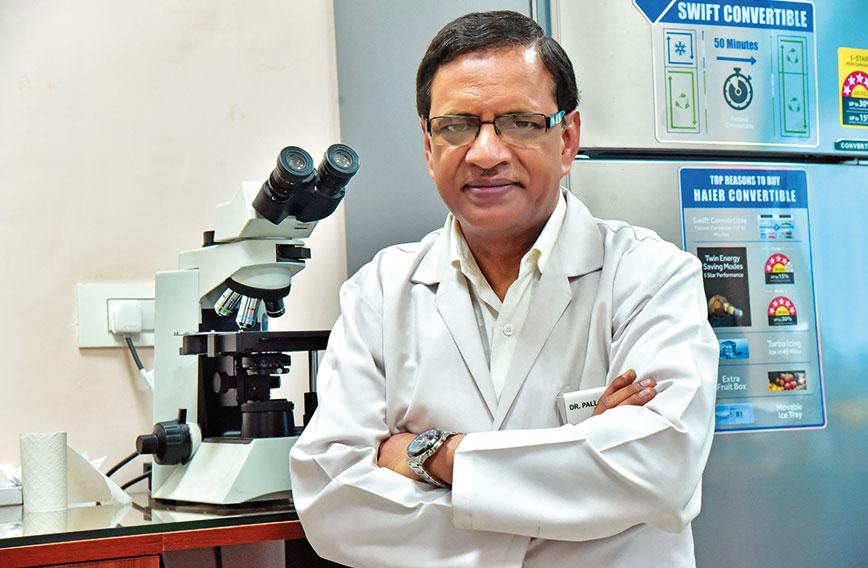 Dr Pallab Ray: 'Every person should ask their doctor whether he really needs an antibiotic'

'Bring back bacteria and sanitise less'

Is the irrational use of antibiotics leading to a public health emergency? Are Indians heading for a situation in which life-saving drugs won’t work on patients who desperately need them? A scientific study under the Indian Council for Medical Research (ICMR) has both good news and bad. The situation is not as bad as earlier (perhaps less rigorous) studies had made it out to be. But it is also true that antibiotics are being used too casually for the general good. Left unchecked, this trend could lead to a major problem. Better regulation and education of medical professionals is the answer together with a holistic approach involving humans, animals and agriculture.

The findings of the study, led by Dr Pallab Ray, professor of microbiology at the Post Graduate Institute of Medical Research and Education (PGIMER) in Chandigarh, were made public in June. They made sensational headlines, but for the wrong reasons. The scientific nuances of the research had not been fully understood. Civil Society spoke to Dr Ray at length for better understanding.

Your research findings are very worrying. How confident are you of your findings and what are the implications for public health?

I won’t say that we have done something for the first time. There have been earlier studies, though they were smaller. But this particular study is a part of the Indian Council for Medical Research's  antimicrobial resistance surveillance network study. ICMR has very strict protocols. That way this study is much more advanced as it meets all the scientific parameters set by ICMR.

While drawing conclusions from this study, I want to break down some myths. We need to stop sanitising everything and get bacteria back into our lives. The general public needs to appreciate the importance of microorganisms. We are on our guard when it comes to letting microorganisms into our gut (though it) is a much more robust place than our lungs, which are comparatively very delicate. There are many other aspects that the general public needs to understand.

The study should not be treated as a sensationalist document. We need to interpret the results in the right context.  The other day somebody rang me up and said that one of the Hindi newspapers had reported that from now on 70 percent of the population would not respond to any antibiotic. That is totally untrue.

You must have heard about a study by Timothy Walsh from Cardiff University. He said that the New Delhi metallo-beta-lactamase 1 (NDM 1) makes bacteria resistant to a broad range of antibiotics. He showed the existence of microorganisms or bugs that were resistant to even high-grade antibiotics like carbapenems.

We did not believe it. So we tried to find out the extent (of this resistance) and, truly speaking, we found much less than what he has shown. Till now, it’s not that alarming. What we found is that 70 percent of our population has at least one organism that is resistant to one of the drugs we used.

But what is more important is the phenomenon of multi-drug resistance (MDR), which means resistance to a minimum of one member each from at least three groups of drugs. Every group has got multiple drugs in it. In our study, MDR was found in only two percent of the individuals. For all others, if you had an organism which was resistant to X it was sensitive to Y.

Having said that, we may slowly be moving towards a crisis situation if steps are not taken to control the use of antibiotics. We do not want you to stop using antibiotics altogether, but you should use it only when it is absolutely necessary and not for infections like the common cold.

The dangers of recklessly using antibiotics are well known. Then how and why have we allowed ourselves to reach this point?

We first have to put into the minds of people how important helpful bacteria are in our day-to-day health. The general impression is that antibiotics are lifesavers and bacteria are harmful entities. But things are much more complex than that.

A person who comes to a hospital may already have an infection or may develop an infection at the hospital. When we test it (the infection) for its sensitivity to different antibiotics, we find a lot of resistance and we lay the blame on hospitals for administering antibiotics. Now this is not entirely true because the first concept about this phenomenon is that antibiotics do not cause drug resistance. Drug resistance is a natural phenomenon in the evolution of bacteria.

Humans did not use antibiotics before the 1940s. But when the mummies that had been preserved thousands of years ago were opened, scientists found traces of antibiotic-resistant microorganisms in them. That means we do not need antibiotics to cause antibiotic resistance. It is a natural phenomenon in the evolution of organisms.

When a sensitive organism multiplies there will be one or two organisms in maybe one million or so which will have an aberrant structure. While antibiotics kill the rest of them, the aberrant organism will be resistant because it probably binds to something. This is the natural process of evolution and what antibiotics do is change the proportion. Earlier, we had, say, one organism in 10 raised to the power of six which was resistant. But when we give antibiotics all the sensitive organisms will die because they are sensitive to the antibiotic and that one organism which is resistant will keep on multiplying and that will make the dominant population. Therefore, the total load of antibiotic used at any particular place will decide the degree of antibiotic resistance, whether we take it to be a state, the country or a hospital.

We have nearly 1.5 kg of microorganisms in our gut. We can expect that a few of them will have resistance to some antibiotics. So if we give that individual some antibiotic because of some disease, the resistant organism will become the dominant one. It still lives in the gut. It’s not causing any infection, but the proportion is being changed. Out of the whole quantity of stool which a person passes, two-thirds is undigested food. It is actually bacteria, of which a huge number are coming out.

So how much responsibility rests with the government and how much with the medical fraternity?

You must be aware by now of something called the One Health concept. This is globally in vogue. It means we have three entities — man, animals, and the environment. This means we cannot target one without targeting the others. There is so much exchange of microorganisms between the three that anything going wrong in any one of the three components is sure to have its effects on the others. You know, we are using huge amounts of antibiotics in animals as growth promoters.

So all the three — man, animals and environment — have to be targeted.

Now part of the blame for this overuse lies with doctors. One of the very important reasons is education. Most of the time the MBBS doctors or even those who are MDs do not know much more than the person who sold the antibiotic. It’s not taught from that angle in our curriculum. In the third year, in pharmacology, we study antibiotics to pass the examination. Studying to pass an examination is different from studying to apply ourselves. And by the time we get a chance to apply (what we have learnt) after passing the MBBS examination, we have forgotten much of it. Subsequently we never get an opportunity to read (and refresh our knowledge). Whatever we knew gets mutilated by the medical representatives of the pharma companies. So, what we need are doctors who are more educated about this aspect.

Secondly, again on the medical side, we need to strengthen our diagnostics. Giving antibiotics is one of the ways of somehow overcoming the lack of diagnostics. So even if there is a one percent chance that a patient has a bacterial infection, and the doctor didn’t give the antibiotic and something happens, the patient will catch the doctor and drag him to court. Secondly, an investigation takes Rs 600 but a low-end antibiotic course costs Rs 50 to 60. It is a cheaper alternative. To write an antibiotic prescription takes six seconds, but if I have to make a patient understand it will take 10 minutes.

What kind of regulation do you propose? What do you think the government should do today and in a structured/programmed way, moving forward?

We do not have well-formulated policies. For example, a well-documented policy about not to give antibiotics for ailments like common cold and re-evaluate after 48 hours. I think if we have a written document doctors can refer to, they will probably follow it.

The government has adopted a proactive approach on this. What we need is a multi-level policy — hospital, hospital departments and down to the unit level. There are two ways of enforcing a policy. One is punitive and you understand how it goes. Second is regulation by an authority, which monitors and advises doctors about the anomalies that may have been committed while prescribing medicines. This is known as prescription auditing.

ICMR has already started an Anti-Microbial Stewardship Programme. This programme aims to reduce usage of antibiotics without increasing morbidity. We are proving that antibiotic usage can be reduced by 50 percent without any impact on morbidity. In the US, hospitals have done this.

Many European countries have stopped use of antibiotics for animals. In India we have recommendations not to but much more needs to be done by way of implementation. For example, you will find a growth promoter contains antibiotics. It’s a crude medicine and you can get two kg of it for Rs 5,000. But the Animal Regulation of Antibiotics is coming up in the next couple of years. Things are moving at a very fast pace.

For our lay readers, could you explain what the irrational and misinformed use of antibiotics does to their health?

People need to understand that antibiotics have specific applications. Outside of those applications they are harmful. We have to weigh the benefits and losses of antibiotics. In bacterial infections, there is no alternative to antibiotics. But antibiotics should not be consumed casually.

Every person should ask the doctor whether he really needs an antibiotic. He ought to say: ‘If you wish I can come back again after two days, but please reconsider the antibiotic.’ There has to be a mass movement to sensitise the public.

Otherwise, we will go back to a pre-antibiotic era when there were no antibiotics. Excessive use of   antibiotics will strengthen the resistant organisms, and a stage will come when antibiotics just won’t have any effect. You can well imagine what will happen in that situation.

The resistant type will have an advantage in the presence of the antibiotic. When I stop giving antibiotics, the wild type of organisms, which are the original creation, will grow back. They have much better survival ability than their resistant counterparts. So as they grow back the resistant organisms die down. In this reverse cycle, the sensitive organisms do not become sensitive on their own, but they are developed when the environmental pressure of antibiotics is reduced significantly.

We have a clear example of typhoid fever. The drugs used to treat typhoid had become redundant.  The organism, salmonella typhi, became resistant to amoxycilin, chloramfenicol and trichloromaxicol. Over the past 25 years we used different drugs. In 2019, the resistance to the drugs used earlier has reduced.

The government has been active in checking the incessant promotion of antibiotics by pharma companies. WHO is acting on it. FAO is active and so is ICAR. All of them are making a concerted effort from the angle of One Health.