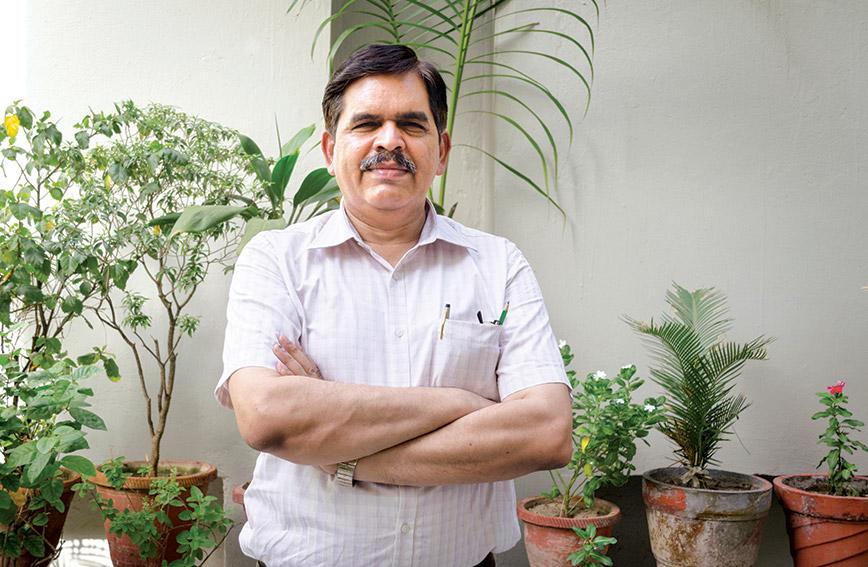 Dr Ashwani Mahajan: ‘Monopoly of seeds means surrender of our food security and my organisation can’t allow that’

‘GEAC and Niti Aayog are wrong on GM mustard’

Differences are out in the open once again over genetically modified (GM) crops with the Swadeshi Jagran Manch (SJM) weighing in heavily against the introduction of GM mustard.

The SJM’s position is consistent with its earlier opposition to Bt brinjal and Bt cotton.

In the past, it opposed the introduction of GM under the Congress-led government at the centre. This time it is questioning the Bharatiya Janata Party (BJP) government, which is technically its own government because the SJM is an affiliate of the Rashtriya Swayamsevak Sangh (RSS).

The SJM is particularly disenchanted with the Niti Aayog’s vice-chairman, Dr Arvind Panagariya, who has issued a report favouring the introduction of GM mustard. It feels the Niti Aayog has gone out of its way to support GM crops.

The SJM’s position is that India’s biodiversity is its wealth. The wide number of varieties of fruits, vegetables and grains that exist need to be preserved and nurtured through the involvement of communities. GM will lead to uniformity and give corporations control over seeds.

The SJM also points out that feedback on Bt cotton from several farmer organisations has been negative. Input costs have risen and problems with pests have become more complex.

The mustard issue is at a crucial stage because the Genetic Engineering Appraisal Committee (GEAC) of the government has cleared it. But the SJM says the GEAC is compromised and controlled by business interests.

The SJM backs natural farming, indigenous technology and has consistently opposed globalisation, perceiving it as an exploitative trend. “SJM was started as a platform for all those who believe, like we do, that globalisation is not going to work or even last long. It’s a passing phase. Ultimately it is swadeshi that is going to survive,” says Dr Ashwani Mahajan, professor of economics at Delhi University, who has been working for SJM since 1994.

When we caught up with Dr Mahajan for this interview, it was at the sparse office of the SJM in Delhi. It was a blistering summer afternoon and a power outage lasted throughout the interview. Dr Mahajan, well in command of his facts, was soft spoken and firm and quite clear that the SJM's views won't be overlooked.

We are of the opinion that capitalism and so-called communism and socialism are all based on the exploitation of nature. If you look at the bigger canvas, anything that doesn’t work on the principle of sustainability doesn’t have a future.

The whole world has been looking for an alternative to capitalism and socialism. What is your alternative?

From the beginning, we were of the opinion that globalisation was adopted as a last-ditch method of saving capitalism. Those countries practising capitalism were facing recession, low demand and so on. They wanted to capture world markets through the World Trade Organisation (WTO) and the name given to this strategy was the Washington Consensus. We all know how socialism drowned. China tried the capitalistic route. Its current status isn’t encouraging.

We believe that a country’s development methodology should not be based on exploitation of nature and the hunt for markets. On the contrary, every country should adopt a model of development based on its own resources, its own intellect, its own manpower and environment. Ultimately, what you need is a vision of self-reliance.

We were told when we began that self-reliance is an anachronism in a world which has become a global village. Now, in the same global village, the high priests of globalisation are talking of swadeshi. They are saying, be American, buy American, hire American. Even in the European Union the talk is to go local.

The whole world, out of compulsion, is speaking the language of swadeshi. Our message to our people, to the world, is that globalisation has failed and only development based on your own resources, intellect, manpower and natural resources will take you ahead.

Well, technologies that have done a lot of good to the world have spread because of globalisation.

So you say technology is neutral space. Yet you have staunchly opposed genetically modified (GM) mustard.  Why?

Because GM is against nature. GM seeds are seeds of destruction. The arguments being given for Bt cotton are fallacious. They don’t exist. They said productivity will increase. But the graph shows declining returns. The productivity of Bt cotton and cotton grown traditionally is the same. They said use of chemical pesticides will decline. Actually, it has increased. We have data.

These seeds are against nature. So far, pollination is a natural process. Now if you insert genes from a fish into a tomato, this is against the natural order. Besides, we know about the many cases that have been filed against Monsanto’s Round-Up variety for causing cancer.

We studied GM mustard too. It is not more productive than our traditional varieties. They said it’s swadeshi, we found out it’s not. They said it contaminates only up to 20 feet. That is also wrong. Contamination stretches for several kilometres and is a big issue in our biodiversity-rich environment. Beekeepers are upset at the impact GM will have on bees. Their livelihood will vanish. I told GEAC and Niti Aayog your report is unscientific, please read it again.

So why is GM being pushed repeatedly?

There is a conflict of interest among members of the GEAC. Some of them have links with multinational companies and derive benefits for pushing GM.

GEAC is not an independent body. They say we have scientists. I told them you should have independent scientists. I asked Arvind Panagariya why he was pushing GM when his mandate is to push cooperative federalism. States are not interested in GM. Without asking their opinion, how can he write a report on GM. He said, We have to educate them. We asked him, Where were you educated on GM, so that you could teach them further? It was discussed with farmers, we were told. But we know so many farmer organisations — the Bharatiya Kisan Sangh, the Bharatiya Kisan Union — they are all against it.

But the whole world is taking to GM.

Not at all. Only six nations. These include the US, Canada, Brazil and the UK, and they included India because 95 percent of the cotton grown here is now Bt. But who gave them permission? It was given after they had already started growing it. They misled farmers into growing Bt cotton and then the acreage increased to 95 percent.

When this issue came into the public domain, Bt brinjal did not get permission. Scientific data was made public. For GM mustard, too, we are asking for all data to be made public. If the data consists of eight to 10 thick dossiers you can place it on the internet.

GM is one of the biggest issues facing the country today. The environment ministry has not given it the nod as yet. Basically this is an attempt to monopolise the seeds market in India. Monopoly of seeds means surrender of our food security and my organisation can’t allow that to happen.

We have better seeds than what has been given by Professor Pental. Our seeds are more productive. As for our mustard we can eat its leaves, extract aromatic oil, use it in Ayurveda. Our biodiversity sustains our people. We should not destroy it.

What do you think of the Niti Aayog?

When the Niti Aayog was formed we welcomed it. The former Planning Commission had a top-down approach to development, a one-size-fits-all model. Sharing of financial resources with states was steeped in politics. If the state was allied to the ruling party at the centre it was bestowed with money, special packages and so on.

Modiji understood the skewed situation. He had studied it as chief minister. He said what was needed was cooperative federalism. We need a bottom-up approach and programmes in line with that approach. Accordingly, the 14th Finance Commission report cut down centrally sponsored schemes and the focus is on cooperative federalism.

We have welcomed all this. But they appointed Arvind Panagariya, who does not understand India. He has spent his formative years abroad and comes with old-fashioned ideas of globalisation, WTO compliance, development via the FDI route. Well, the WTO has failed and FDI won’t give you any results.

The PM is not pushing for GM either. He says technology is required to increase agricultural productivity. But his words are misread as advocating GM. The PM wants the Northeast to be organic. He cannot be a proponent of GM.

This government has been there for more than three years now. Since then GEAC has had 20 meetings. They have made various proposals, done field trials and so on, but not even one has been passed by the environment ministry. Besides, almost 99 percent of public opinion is against GM.

But agriculture does need growth?

Yes, of course. But, over the years, funding for research has diminished. The Council for Scientific and Industrial Research (CSIR) does not have funds. We used to spend 27 percent of our budget on agriculture. Today we spend just one-and-a-half percent. The victim of that reduction is the researcher. So companies took over and scientists began working on their projects. We have, per hectare, the highest number of scientists in the world. They are not working because there is no incentive, no encouragement, no motivation. We have to promote our indigenous scientists, not foreign science and scientists.

See, if I say proudly that our non-GM mustard variety is better it is because our agricultural scientists have developed it. We objected to Bt brinjal. When we told the chief ministers of states to speak against Bt brinjal, they said, We have thousands of varieties of brinjal and all of them will vanish. Vandana Shiva said at a meeting that in Raipur we have 150,000 varieties of rice. Which country has this kind of diversity? I can’t allow it to be ruined.

Will the Niti Aayog listen to you?

If the Niti Aayog does not speak for the benefit of the nation, no one will listen to them. If they want to get heard they will have to prove that they are working for the small man, the poor person and the most marginalised individual.  I am not criticising them. But we don’t see any effort on their part to improve the agricultural sector. To them, increasing the farmers’ income simply means introducing GM.

I would request them to go to their archives. There they will find the dust-laden S.P. Gupta report. They will find the answers to everything — how to increase the income of farmers, how to improve livelihoods, how to develop an indigenous agro-food processing industry. They should take out this report and lobby to get its recommendations implemented.