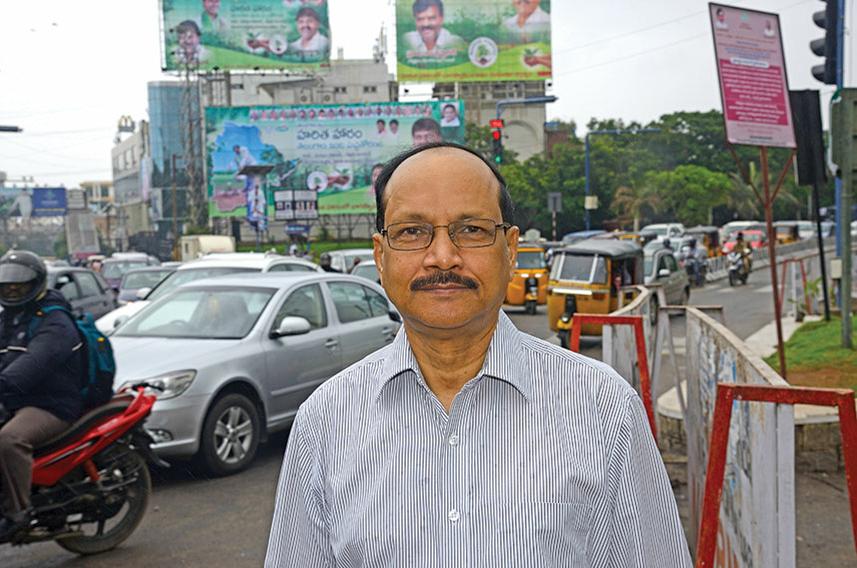 Prasanna K. Mohanty: ‘Over the years the sources of revenue for a municipality have shrunk’

‘Give cities a share of GST to make them viable’

India’s long-term economic prosperity will be closely linked to how its cities perform. Can they emerge from decades of neglect to become vibrant hubs of skills, technology and empowerment?

Helping municipalities acquire the authority and expertise they need to deal with backlogs and meet the rapidly increasing demands on them is a complex task. Money is needed in dollops for infrastructure, but more important is a change in perception. Though municipalities are the third tier of government, can mayors and councillors be given a context in which they feel more empowered?

Prasanna K. Mohanty says that a national consensus is needed on the role of municipalities so that they can be better funded and provided with the space to raise resources through innovative taxes and user charges.

Mohanty should know because as a bureaucrat he has been closely involved with urban governance. Now, as a scholar and Chair Professor of Economics at the University of Hyderabad, he is a student of cities and what makes them tick. Dr Mohanty is the author of the recently published book, Financing Cities in India. Excerpts from an interview:

In the drafting of the Goods and Services (GST) law, as we know it today, have the finances of the municipalities been taken into account?

Municipal finances have not been taken into account because policymakers think that state governments should sort out the issues of municipalities. But the point is that after the 74th Amendment Act recognised municipalities as the third tier, they need financial strengthening to perform. We gave them 18 functions through the 12th Schedule. But their finances are left to the state governments. And, over the years, the sources of revenue for a municipality have shrunk. Octroi was abolished but it was not replaced with an alternative source of revenue for municipalities. Currently, municipalities have got only property tax, except in Mumbai, which has got octroi.

In this entire debate and discussion over GST, which in itself is a complex mechanism in our country, has any kind of attention been paid to the financial needs of city governments?

The exercise on GST has not thought about the city. Perhaps it is in the belief that the matter can be referred to the GST Council, which would be empowered to take decisions. However, the high-power expert committee on urban infrastructure has recommended a sharing of GST.

Sharing of GST in a mandatory way?

Yes, in a mandatory way. Because anything you do without creating a fiscal space for municipalities I don’t think will work. We have given them functions and we know clearly how a municipality is expected to perform. McKinsey estimates are that by 2030 municipalities will require something like Rs 9.74 million crore, which includes affordable housing.

Another estimate, by the high-power expert committee, talks about Rs 5.92 million crore by 2031. The point is whether we can leave these financial requirements to be taken care of by the states or whether there should be a national debate to evolve a consensus on what municipalities need.

In India municipal revenues are about one percent of GDP. Even in countries like South Africa, Poland, Brazil, it is above five percent. So we have to strengthen municipal finances, but the question is how?

In the US and a few other countries, municipalities have got access to income tax, excise tax, value added tax, goods and services tax. But in India they have got only property tax.

The talk on GST is all about economic growth. But cities drive growth. How can they play this role when their finances are in a mess? How do you explain this contradiction?

I would like to start with the problems of cities. Are cities collecting their revenues? No. Property tax collection is something like 0.18 percent of GDP. In other countries, it is about two percent. If municipalities do not collect their own revenues like property tax and then say they want sharing of other taxes, I think that is not justified.

But even if municipalities collect property tax, there are limitations. Property tax is something like an asset tax. People can be asset-rich but they may be cash-poor. As a citizen I earn my income and I pay my taxes. I purchase goods and I pay taxes. I don’t feel the burden. But with a tax like property tax, where it is levied on an asset, the asset may not be (the source of) income. For example, owners of rent control properties do not get rent (at current rates). So, therefore, there are complications.

If Rs 5.31 million crore, or even half that amount, is to be mobilised we have to see what can be realistically mobilised by municipalities and what is the shortfall. The municipalities come under the states, but the states have their own problems. We cannot say only the states should be burdened. At the same time the requirements of cities are growing. They must be connected to a predictable and growing source. And, in the present framework of the Constitution, I don’t think there is any other way but to tap GST.

Is this a problem of vision? Do we lack a national vision for our cities?

It is not a problem of national vision. It is a problem that has been continuing since Independence. Not many people have looked into this. Research in this area is abysmally poor. We did a study for the Reserve Bank of India in 2007. That is perhaps the most up-to-date study with detailed data. Researchers have not articulated the problem. Strictly speaking, nobody has looked into local finances and in my opinion there has not been a demand at all. Mayors never demand.

Do you see the Niti Aayog looking into the issue?

I think they know of the problem. They might be looking into it, but I’m not aware of it.

You have suggested some reforms. Could you tell us what they are?

We must be very clear what exactly the municipalities are going to do. We gave them 18 functions through the 12th Schedule of the Constitution. But we never did activity mapping.  Let’s take water supply. It has got source creation, transmission, distribution…. If you say the municipality will get water from Nagarjuna Sagar or Godavari, it is not enough. We have to be very clear about the functions and activities being discharged by the municipalities. Once that is decided, then finances must be clear. Finances must be commensurate with the functions. There must be accountability and the entire thing must be through a public process.

How can they be better funded? What are the reforms that you are suggesting?

Land-based taxes could be reserved for cities. There is scope for value-capture financing. Land values are high in cities. Land values in Mumbai and Delhi are comparable to New York and London. Value in the city is created through planning and infrastructure investment. The Metro has created value. But (currently) people don’t pay for value.

An impact fee. Development has local impacts as well as city-wide impacts. Suppose you build a complex with two million square feet of space. It will have an impact on sewage, traffic and so on. The concept of an impact fee is that those who create adverse impact must mitigate the impact. Therefore we say property and land taxation, development financing through impact fee and value-capture financing must be fundamental principles for local finance.

A betterment levy is needed. For example, when a 151-km Outer Ring Road is built, land values go up. People didn’t contribute to this development, but they must at least contribute to the creation of connecting roads, water supply and sewerage.

Any other point on which you would want reform?

If you want our cities to become engines of growth, we must make investments in infrastructure. In the pre-Independence era, there was property tax and octroi. Octroi was rightly abolished because it was an obnoxious tax, but it has not been replaced. A substitute in the current framework is nothing but a statutory share or a share of GST.

We followed the British tradition and it was the British who gave us property tax and octroi. They themselves did not follow octroi and though they continued to depend on property taxes, they also gave municipalities huge formula-based grants.

In my opinion the empowering of the municipalities should be through finance. The ideal thing is a municipal finance list in the Constitution. If that can’t be done then there should be a statutory share in the GST. This share of GST could be what municipalities would have got had octroi existed. Calculate that and give it to them as a percentage of GST.

What about user charges?

Another source of revenue is user charges. We must pay user charges for services like water supply, sewage and solid waste management. And the poor must be subsidised. There is no way the poor can be made to pay for all this.

All long-gestation period projects must be funded through borrowing because they spread over generations. You pay back from user charges, property taxes, land-based taxes, value-added taxes and so on.

You need a lender who knows to lend in relation to such long-gestation projects.

We have to start somewhere. Look at municipal bonds in the US.

Municipalities should be strengthened with finances, functionaries and functions. So the bottom line is they must be strengthened and we should start today. Most of the services in the US are provided by local bodies. They are closest to the people.

Would you say there is a need to understand the unorganised sector better and bring it more into the organised sector and thereby make it a source of source revenue for municipalities?

When we talk to street vendors they are all very happy to pay basic municipal taxes. But no one collects it because of corruption and other reasons. Isn’t this a missed opportunity?

This is a huge opportunity, isn’t it?

Yes, this is a huge opportunity. But there is a much bigger opportunity in capture of land value and using planning as a resource.

Are there any other reforms that you would like to talk about?

Governance is the key. Cities are caught in a vicious circle. Municipalities don’t provide good services, people don’t pay taxes. If people cannot pay taxes, municipalities cannot give better services. As municipal commissioner in Hyderabad, we brought in reforms without octroi and value-added tax. The property tax growth in one year was 70 percent. The trade licensing growth was 40 percent and the advertising growth was 50 percent. So, what we have to understand is governance is the key. It is necessary that we strengthen our municipalities as institutions of democracy. Look at New York, Tokyo, London. Secondly, professionalisation of administration is very important.

You are saying municipalities need expertise?

They require expertise, the right people, motivation and leadership.

In our country the mayor has yet to become a powerful person. Even if you take a new city like Gurgaon, the municipal corporation has no status.

India is a union of states and the municipalities are a product under state laws. It is the states that have to come together along with the centre to decide what kind of municipalities we require.

You were closely involved with the Jawaharlal Nehru National Urban Renewal Mission (JNNURM). Has it been a success or a failure?

It is mixed. I was the first mission director and won’t say it has failed.

Where has it succeeded?

It has created a climate. It brought cities and reforms into the limelight. The point is that the reforms were not pursued. And any funding of municipalities without reforms will not last long. Therefore, we have to strengthen municipalities and pursue well-designed programmes supported by the state governments and the central government.