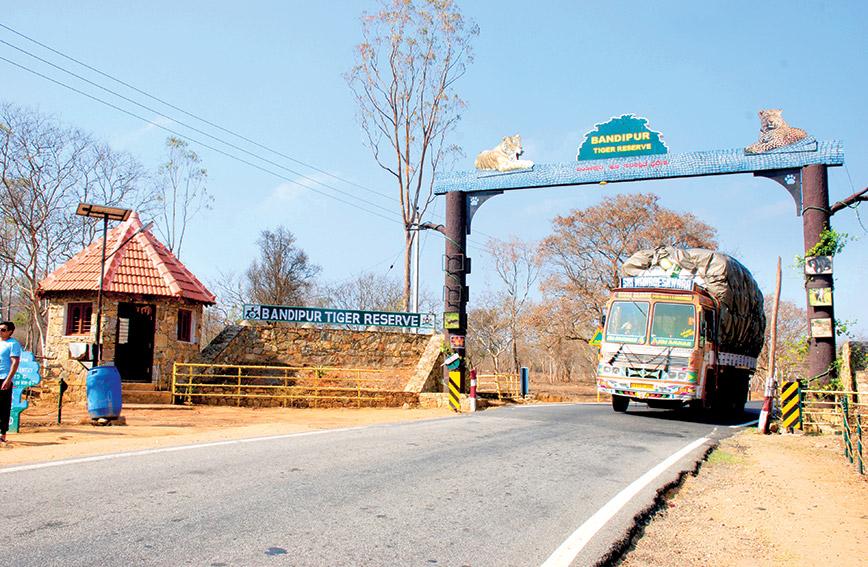 Entrance to the Bandipur Tiger Reserve

Why Bandipur is special: jungles and rustic living


April is the cruellest month at the Bandipur National Park but a slight mist in the early hours enhanced the mystery of the jungle. Shadows loomed large and dark. As the sun began to filter in, the jungle came alive with the twittering of birds. Spotted deer loped all over, rushing across our path and then grazing in small clearings with their fawns.

After a decade, I was on a wildlife jaunt to Bandipur, an enchanting forest that never ceases to delight me, no matter the season. Once the hunting preserve of the erstwhile Maharaja of Mysore, Bandipur is now the favourite haunt of wildlife enthusiasts and photographers. Set against the picturesque backdrop of the enchanting Nilgiri range with its mist-covered peaks, it sprawls over 874 sq km of diverse and dense vegetation.

The National Park, which was brought under Project Tiger, forms a contiguous stretch of forest with the neighbouring Rajiv Gandhi National Park, and the Mudumalai and Wayanad Wildlife Sanctuaries. Together they form the vast Nilgiri Biosphere Reserve, India’s most significant bio-geographic zone, sharing the wilderness of the Western Ghats, the Nilgiris and the Deccan plateau.

Comprising a mix of dry, deciduous and evergreen forests with scrubland vegetation, Bandipur is fed by the Moyar river which drains the Nilgiri hills along with the Nugu and Kabini that originate from the Western Ghats. The spectacular Moyar gorge forms a natural boundary between Bandipur and Mudumalai.

What makes Bandipur a special experience is the sheer profusion of animals, enabling viewing at close quarters, the abundant beauty of the reserve and, above all, its easy accessibility.

Manoeuvring our way through the jungle, we reached a pond. A sambhar sauntered through the undergrowth and made his way to the pool of water to quench his thirst. Peacocks we saw in plenty, some strutting around with their feathers spread. A troop of bonnet macaques frolicked around, prancing from one tree to another. A monitor lizard crawled across the dirt track and vanished into the bushes.

Rides into the park on especially laid-out dirt roads, which usually pass close to grazing areas, salt licks and water holes, offered excellent views of wildlife. When we asked our guide why sightings of elephants were rare, he explained, “As the bamboo that had flowered en masse died a few years ago, it will be several years before Bandipur’s elephants taste bamboo again.” We spotted only two elephants during our safari rides as some of them had migrated to the neighbouring forests in search of food and water.

We saw huge pugmarks, imprinted deeply on the soft track and, like all tourists, we waited in anticipation to see the elusive tiger. Though luck was not on our side it was a delight to see other creatures of the forest.

The park is a great birding area and is home to more than 230 species of birds. Some of the commonly sighted ones are jungle babblers, peacocks, tawny eagles, woodpeckers, shrikes, egrets, parakeets, drongos, barbets, warblers, cuckoos, red-wattled lapwings and sunbirds. Bandipur also has its share of reptiles, including pythons and marsh crocodiles.

We headed to the misty forested mountain of Himavad and Gopalaswamy Betta (Lord Krishna’s hill), the highest peak in the park, from where we had a bird’s-eye view of the surrounding expanse. At the peak is Venugopalaswamy temple, dedicated to Lord Krishna and dating from the 14th century. Built by a Chola king, it was later patronised by the Maharaja of Mysore. Standing in the temple courtyard, I could see the vast expanse of the once green canopy of the National Park and the adjoining forests of Nagarahole and Wayanad.

The large reservoir of the Kabini river glistened near the horizon. The Nilgiris rose high at the southern edge. Preparations were in full swing for the jatra.  Locals throng here during the annual jatra. From the top of the hill we sighted a herd of elephants scouting for water holes.

The sprawling five-acre Bandipur Safari Lodge, a unit of Jungle Lodges & Resorts Ltd, has a gazebo where meals are served and a cluster of cottages offering privacy and seclusion. Each room revolves around a wildlife theme with walls behind the beds painted with animal motifs and is named after the animal painted on its walls. Accommodation is provided in simple but comfortable cottages which have sizeable bedrooms and en suite bathrooms.

After the exciting safari ride we watched a nature video. One can borrow a nature book from the library or chat around the crackling campfire with the resident naturalists, who provide information about the area. Tired out by the safari, that night we slept soundly.

From Bandipur Safari Lodge, we moved to Windflower Resort in Mangala village for a night.  Twenty-two terracotta tile-roofed cottages were set amid five acres of local tree species. The resort is unfenced on two sides and, if you are lucky, you can see wild animals wandering in freely after dark. The rustic resort merges its spaces well with the jungle.

The rooms feature a cosy sit-out overlooking the dense and green forest. On offer are a bullock cart ride to a nearby village, guided walks to a tribal settlement near Mangala village, wildlife safaris and team-building activities. You can also relax at the outdoor infinity pool or the spa.

When to go: Between April and January is a good time to visit, but it is best to go between September and December for wildlife sighting. November to February is ideal for birding.