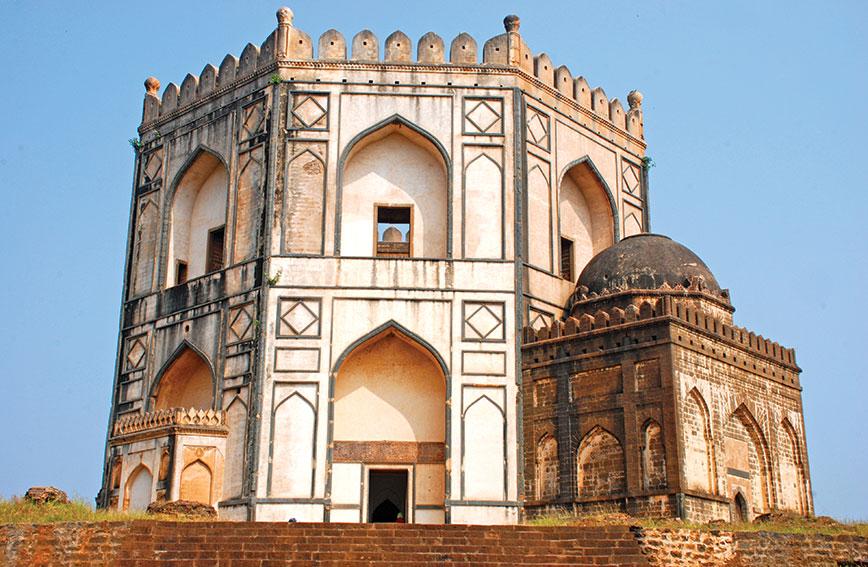 The Chaukhandi of Hazrat Khalil Ullah, an octagonal mausoleum

The silence of the morning was broken by the chorus of birds. Several colourful butterflies flitted around. Langurs pranced from tree to tree and peacocks sprang a surprise by making a sudden appearance. We were on a nature trail in Blackbuck Resort, a unit of Jungle Lodges and Resorts Ltd. Perched on a hillock behind a barren facade, between the Honnikere Reserve Forest and the Vilaspur lake, this nature retreat is an 18-km drive from the town of Bidar in north Karnataka. It gives added zest to a weekend getaway as one can combine bird-watching and boating. The cottages here are well spaced out and built at various elevations following the natural contours of the hillock. Spanning three categories, the cottages come in varying sizes with each offering a unique view of the pristine lake.

Escorted by Hussain, our driver-cum-guide, we ventured into the surrounding open grassland in Dumsapur village, five kilometers from Bidar. We sighted herds of free-roaming blackbuck grazing their way across the grassland. The light brown fawns, easily camouflaged by the tall grasses, are a lovely sight to behold.  The males looked graceful as they flaunted their corkscrew horns. The blackbuck sprinted off the ground as we drew closer. From there we headed to Bidar, the historic town founded by the Bahmani dynasty during the medieval era.

Entering Bidar was like being caught in a time warp. Encircled by eight imposing gateways and intricate battlements, Bidar was for centuries the capital of two of the most illustrious dynasties in south India, first the Bahmanis and then the Barid Shahis. I took a leisurely stroll to the innumerable forts, palaces, Sufi shrines and Bahmani-era mosques that dot this pleasant little town and the neighbouring villages. From here, we rambled through the crumbling ruins of the former royal enclosure — a sprawling complex of ramshackle palaces, royal baths, kitchens, zenanas (women’s quarters), pleasure pavilions and assembly halls. 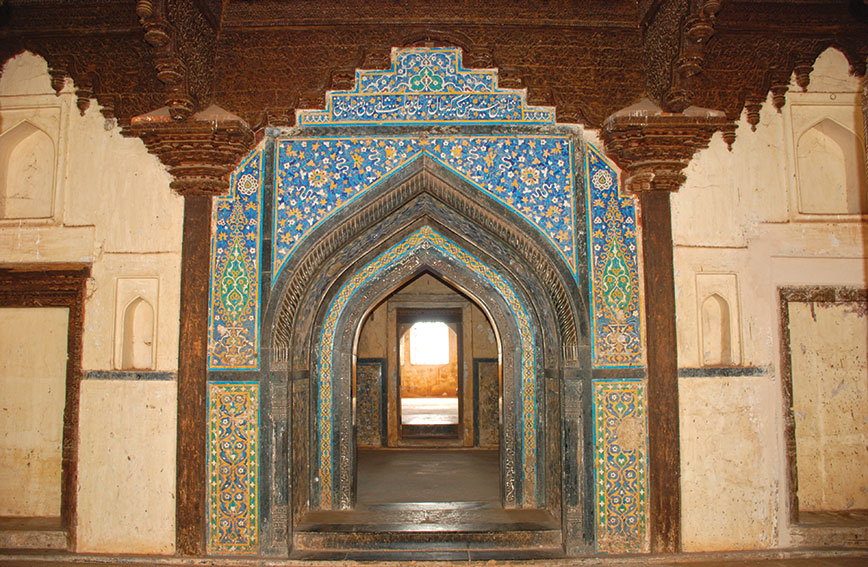 The rugged 15th-century fort, surrounded by a triple-moat wall hewn out of red rock, with intricate battlements and an imposing gateway in the centre of the town is the highlight of the old walled town. The first prominent building inside is the charming Rangin Mahal which comprises cisterns, tanks and underground rooms to beat the heat. The interiors flaunt the finest surviving Islamic art in the Deccan with superb wood carving above the door arches and Persian-style mother-of-pearl inlay on polished black granite surfaces. We visited the nearby Archaeological Society of India museum, which houses an interesting collection of artifacts from the Sultanate period, including Hindu temple sculpture, weapons, coins, pottery, huge fort locks and Stone Age implements.

Opposite the museum is the Solah Khamb mosque (1327), the oldest Muslim monument in Bidar and one of the largest in the Deccan. Its most striking feature is the intricate pierced-stone calligraphy around its central dome and the covered courtyard for prayers. It is so called because of the 16 pillars at the centre of its prayer hall. Our next stop was the impressive ruins of the madrassa (Islamic seminary), whose single minaret towers  tower above the town centre.

The distinctively Persian-style building once housed a world-famous library containing 3,000 manuscripts which were damaged after being struck by lightning in 1695. Today, the sprawling three-storied structure has a mosque. The elegant arched facade of the one remaining minaret has retained large patches of the vibrant Persian glazed tile work which includes swirls of floral patterns and bold Koranic calligraphy.

Just a hop away from the madrassa is the Choubara, a circular watchtower with a mounted clock at the crossroads, which kept vigil for enemies and happenings in the city and from where orders were announced. The next halt on our heritage sojourn were the eight domed tombs of the Bahmani Sultans and their families in Ashtur, two kilometres east of Bidar. The graves are still regularly draped with fresh satin and flowers, and are arranged in a long line along the edge of the road. 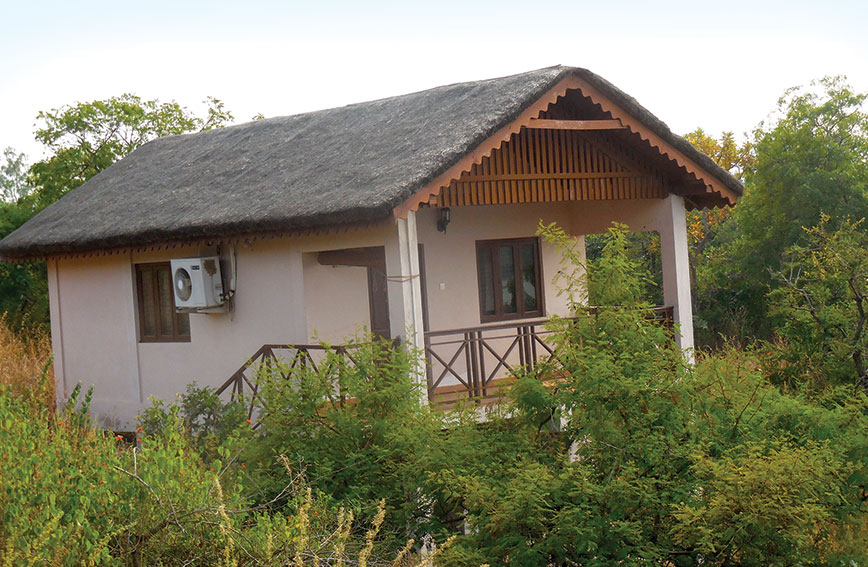 A cottage in Blackbuck Resort

The exteriors, embellished with stone carvings and superb coloured tile decoration, depict a strong Persian influence while the interiors flaunt coloured paintings with gilding. A quick detour from the road took us to Chaukhandi (of Hazrat Khalil Ullah), an octagonal mausoleum atop a low hillock between Ashtur and Bidar built by Allauddin Shah for his chief spiritual adviser. One can see inside the saint’s tomb and other graves, covered with green satin weighed down with stones and flowers.

Another fascinating testimony to Bidar’s long tradition of the harmonious intermingling of various cultural and religious traditions are the Gurdwara Nanak Jhira Sahib and Narasimha Jhira. They are unique as they have been built around jhiras (springs of water). Legend has it that in 1512 Guru Nanak halted at the place where the gurdwara stands today.

When the local villagers complained about the severe drought, the compassionate Guru is said to have moved a stone from a hillock with his wooden footwear after which an unrestricted supply of water gushed out. The water is believed to possess certain medicinal properties. At the Narasimha Jhira, with its underground cave temple, we had to wade through chest-deep water in a tunnel, braving the stench of bats, to have darshan of Lord Narasimha. 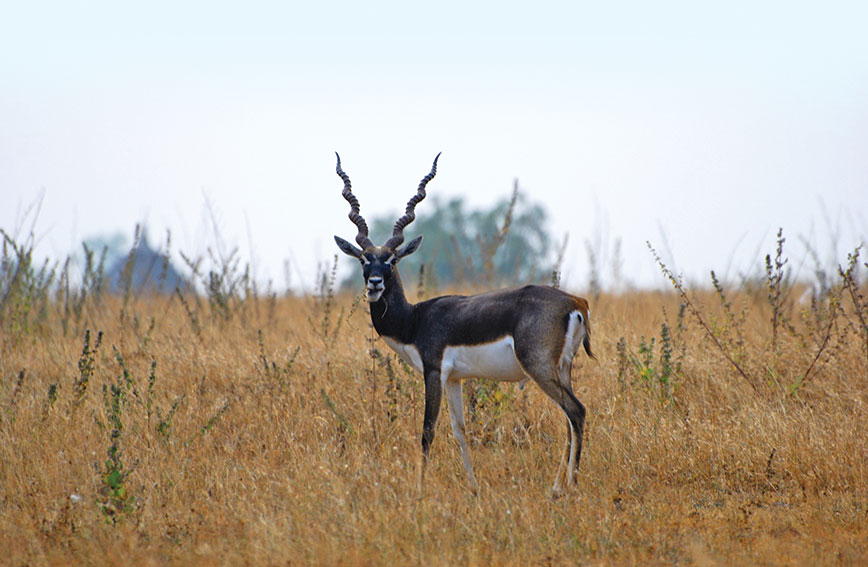 Fact File
Getting there: Air: Hyderabad is 145 km away.