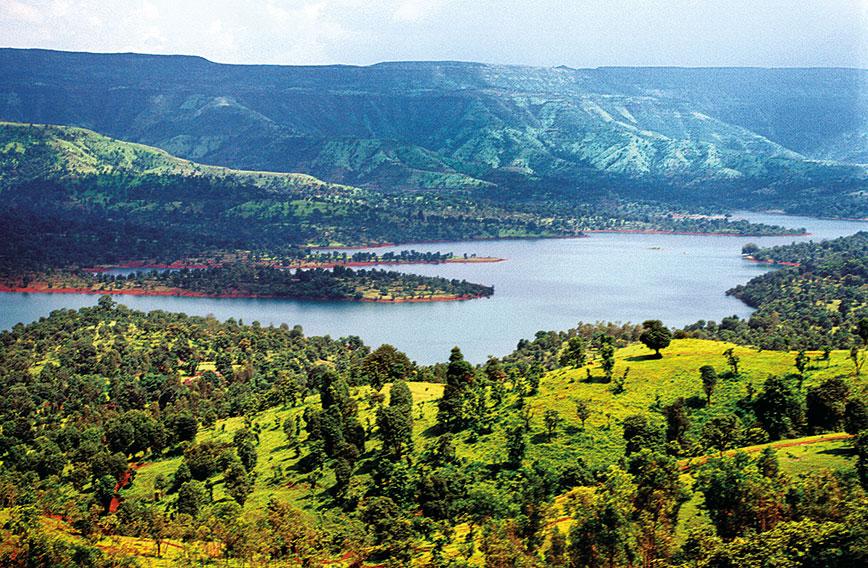 A view of the Krishna river from the Panchgani- Mahabaleshwar road

Take a tour of history and have strawberries

A striking statue of Chhatrapati Shivaji Maharaj astride a horse with sword held high welcomed us as we entered the verdant hill resort of Mahabaleshwar. The history of Mahabaleshwar can be traced to the days of Shivaji, who visited a sacred spot here in 1653 which symbolised the source of the Krishna river. It was in an ancient temple of Goddess Bhavani in Pratapgad that Shivaji’s mother, Jeejabai, gifted him a sword and wished him success in tackling the formidable tasks that lay ahead.

History records that the daring duo first visited old Mahabaleshwar to offer their prayers at Krishnabai or Panchganga (five streams) Mandir, an ancient temple where there is a sculpture of a cow suckling a calf. The five rivers, Krishna, Venna, Koyna, Savitri and Gayatri, are said to originate here. Close by, in a forest clearing, is the Mahabaleshwar Mandir, an equally ancient temple of Mahabali from which the hill station derived its name. From this naturally occurring Shivalinga flows a perennial spring whose clear waters have curative powers.

This is strawberry country. There are delicious red ones everywhere. But first it was history on our plate. We began our hilly sojourn with the Pratapgad fort built by Shivaji in 1656 on craggy cliffs. It is famous in historical chronicles since the fate of the Maratha Empire took a crucial turn here. The great Maratha warrior had to scale the treacherous slopes of these hills and fortify himself against raiding invaders behind the ramparts of the Pratapgad fort. We saw a tomb reminiscent of Shivaji’s exploits and his treacherous encounter with Sardar Afzal Khan of Bijapur. 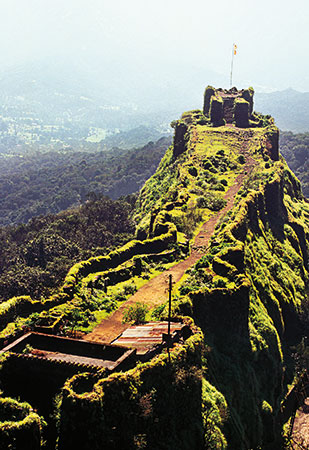 We did not venture to climb the 450 steps leading to the top of the towers as the climb looked daunting. There are four observation towers at the top, located at strategic corners from where one can see the three neighbouring districts of Raigad, Satara and Ratnagiri.

The British explored the region in 1824. But it was Sir John Malcolm, the then Governor of Bombay, who discovered Mahabaleshwar in 1828 and transformed it into a great hill retreat, originally known as Malcolm Peth. The bazaar main street is still known by this name. In 1929, the British formally acquired this territory and used it as a retreat for wounded and ailing soldiers. Subsequently, roads were laid and the resort developed quickly with the construction of bungalows, churches and a club, as well as a polo ground and race course. Mahabaleshwar, once the summer capital of the Bombay Presidency, is now Maharashtra’s most popular hill resort.

Nestling in the Sahyadri range, Mahabaleshwar has a luxuriant cover of foliage. Its protruding promontories offer magnificent views of the precipitous edges of the Sahyadris and the valleys below. On days when the sun shines bright and clear, one can even see the sea on the distant horizon. Streams originating from springs at the heads of ravines form waterfalls in the monsoon. Here rises the Krishna, one of southern India’s greatest and most sacred rivers. Thirty designated sightseeing spots offer dramatic scenery. With its pleasant walks and panoramic lookouts, there’s something to explore every minute of your holiday.

We visited favoured spots such as Arthur’s Seat, Connaught Peak, Kate’s Point, Lodwick Point and Lamington Ride which evoked memories of the historical escapades of the legendary Maratha warrior and the adventures of the British. Our ponywala shepherded us through Lady Wellington Gallop, Malcolm Ride, Bridle Path and Mahabaleshwar’s highest spot, Wilson Point, which offers a stunning view of sunrises. Relics of the British presence linger in the names of  various ‘points’, ‘rides’ and ‘paths’ as well as in several buildings. Faded traces of the British Raj are discernible in several 19th-century lodges and colonial homes dotted around the hill retreat. 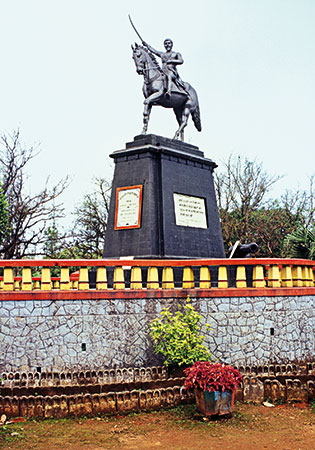 The best view is from Arthur’s Seat, 12 km from Mahabaleshwar, which looks out over a sheer drop of 600 m to the Konkan coastal strip. One can peer into the distance and see hill forts and observation towers at Raigad and Torna. It is so called as one Arthur used to sit and gaze at the river Savithri where his wife and daughter lost their lives in a boat disaster. We watched the wind lift a hurled twig high into the air.

Streams emanating from springs at the heads of the ravines hurtle down as waterfalls in the wet season. The Dhobi waterfalls and Lingamala waterfalls are the most prominent among them. Lake Venna, with its pleasant tree-lined banks ringed with popular walks and pony trails, is the ideal place for an outing for holidaymakers. One can indulge in boating and fishing here. We also visited Morajee Castle where Mahatma Gandhi stayed when he visited Mahabaleshwar in 1945, the B.D. Petit Library near the bus stand, and the colonial-style bungalows.

After visiting all the prominent points, we went on a shopping spree to the vibrant bazaar, which abounds in ice-cream parlours and chikki outlets. The bazaar is also lined with shops peddling ware like leather goods, bags, tribal trinkets, carved walking sticks and belts.

But don’t miss the strawberries, the red fruit is ubiquitous. A drive along the Panchgani-Mahabaleshwar road is a veritable ‘Strawberry Fields Forever’ ride. These luscious strawberries, converted into jams, syrups, crushes, jellies, marmalades, fudge and ice-cream, are truly yummy. A trip to Mahabaleshwar is not complete without the customary stop at a Mapro kiosk to have your fill of some mouth-watering strawberry milkshake topped with ice-cream.

Where to stay: MTDC’s Holiday Resort