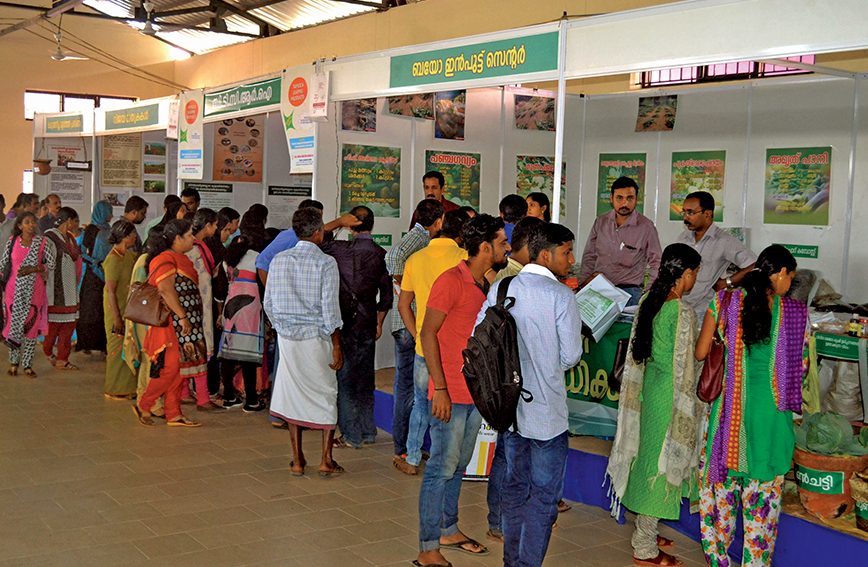 No job? MLA provides a range of options

Where do you begin if you want to start your own enterprise? Most young people don’t know. They search for answers, scanning newspapers, trudging to various government offices to figure out schemes and to banks to enquire about loans.

James Mathew, an MLA from Taliparamba in Kerala, understood the dilemma the unemployed in his constituency faced. For a long time he had wanted to help but as a member of the opposition he felt he lacked the leeway to do things the way he wanted to.

Once he was elected, he got down to work. After a lot of preparation with grassroots organisations in his constituency, he held a 10-day self-employment programme starting on 15 January called  “Samruddhi — Livelihood Options Training and Exhibition”.

It had over 50 stalls on more than 100 livelihood opportunities — all under one roof. Seminars were held as well. People could get basic knowledge of employment opportunities, government schemes and finance in just one day.

“I had been dreaming about this experiment for years,” confessed Mathew. “In fact, I tried to organise such an exhibition some years ago when I was in the opposition. But very soon I realised that it is difficult to achieve such a thing, being in the opposition. So, now that I’m a ruling party MLA, I decided to take it up.”

“It is very difficult for ordinary people to meet officers of different departments and get information. I thought, why not assemble all these department representatives with their exhibits at one place and facilitate an instant one-to-one interaction?

“Next are banks and other financial institutions. Generally, they are helpful only to the big players. Ordinary people have to wait. Often, they don’t get correct information or loans on time. We asked the banks to set up help desks at the event so that interaction starts from here and all people get easy access to information.” 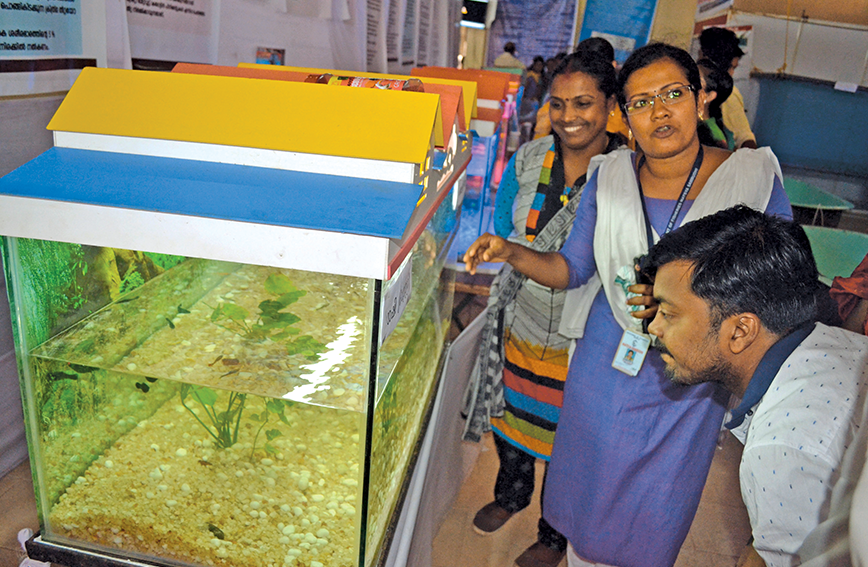 Breeding fish for aquariums was depicted as a viable business

Mathew’s assembly constituency in Kannur district of North Kerala consists of two municipalities and seven panchayats — thus totalling nine local self-government bodies. It has been preparing for this programme for three months. A house-to-house survey was initially carried out which listed all those seeking self-employment. Each local self-government body was given a date exclusively for it.

The aspirants were split into batches of 40. A few batches were led to the stalls while others were sent to seminars. An entry fee of Rs 50 was charged which paid for their breakfast and lunch. By afternoon, they had mostly seen and heard about all the livelihood options available.

At the end of the day, if they had made up their minds, they were asked to register by filling in a form with their contact details and their self-employment preferences listed in order of priority. The aspirants then left these forms in a bag.

The Central Tuber Crops Research Institute (CTCRI) was there with a range of value-added products made from tubers — crops for which Kerala is famous. “We have an incubation centre at our facility in Thiruvananthapuram where agri- business aspirants can learn value addition of tubers, make the product and sell it without investing any money,” said Dr S. Shanavas, Senior Technical Assistant.

The institute has technology that can make 65 products from tuber crops. It conducts a one-day hands-on training session. Trainees are encouraged to make products from tubers themselves. If some of them want to study further, detailed sessions are held at a later date. For those who don’t have finance or lack the confidence to plunge into commercial production, the CTCRI has an attractive offer. 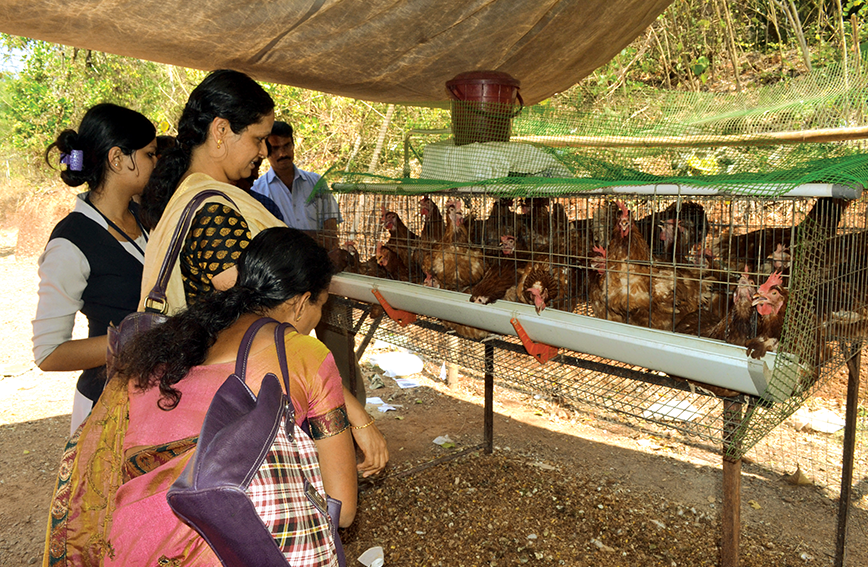 Women look keenly at an example of poultry farming

It has machinery costing more than Rs 60 lakh to perform tasks from peeling to packing. Trainees can just bring their tubers along, make the product of their choice, package and brand it, and start selling it straightaway. If a trainee is confident about the marketability of the product, he or she can start a manufacturing unit. The incubation centre started two years ago. Since then it has trained around 1,600 people and six have started their own units.

“For Nendran banana cultivation to be remunerative, a farmer has to get Rs 50 per kg of banana from every cent of land,” explains Shahnaz, an extension scientist from the Krishi Vijnan Kendra (KVK) in Kannur. “We have around 1,200 farmers solely dependent on banana cultivation in our work area. Most of them are cultivating on paatta (rented) land ranging from 30 cents to an acre. Right now the average yield is 30 kg. The weight of a Nendran banana bunch is six kg. It has to go up to 15 kg to be economically viable. Of course, we have very few farmers growing 50 to 100 kg on a cent.”

In Kadannapally panchayat in Kannur, three aquarium fish breeding centres are running profitably for the past year. “Five housewives can join hands and start an aquarium fish breeding unit if they have two cents of land. The government provides a 50 percent subsidy,” said Sandhya, Project Assistant at the Fisheries Department. “People pay fancy prices for aquarium fish and demand is increasing. The group can earn about Rs 10,000 per month easily.”

An NGO from Thiruvananthapuram displayed three types of modern goat houses for rearing five, 10 and 30 goats. “The 30-goat unit is advisable. From 10 female goats, you can get 30 baby goats. We have used HDPE slated sheets for flooring instead of wood. It keeps disease at bay. The goat house, though a bit expensive, is easy to maintain. Goat manure and urine can be cleaned out without any hassles,” said Vinod, who worked for the NGO. “Fifty such units are running in Kerala. With an initial investment of Rs 1,20,000, one can earn Rs 2,67,000 per annum.”

Roy Varghese of Panniyur, a farmer, displayed an innovatively designed bee box that makes handling bees very easy. It has an opening at the top to which a small Pearlpet jar can be fitted. Bees deposit honey inside the jar. Since the jar is transparent you know when it is full with honey.

“Just pull off the jar and tap it gently so that the bees fly away. In just five minutes honey extraction is over,” explained Roy, giving a demo.

Little bee honey is much sought after for medicinal purposes by companies manufacturing Ayurvedic medicine. Little bee honey is priced at Rs 2,000 per kg. “In a year, good colonies produce around 500 gm of honey,” said Roy. He claims to have sold 1,500 boxes. His box with a bee colony costs Rs 2,500.

Financial institutions too were well represented. National and cooperative banks had put up stalls where they provided details of schemes, finances available and related details. RUDSETI (Rural Development and Self Employment Institute), a reputed self-employment training institute, informed the aspirants about the kind of training sessions it provides.

But some stalls were laggards. A striking case was the Pepper Research Station of Panniyur. Pepper commands a good price. Naturally, a section of people would be interested in knowing more about pepper. But there was nobody in the stall to explain.

On the whole, the event was well managed. An aide of Mathew said the MLA had conducted not less than 300 grassroots meetings to explain his experiment. 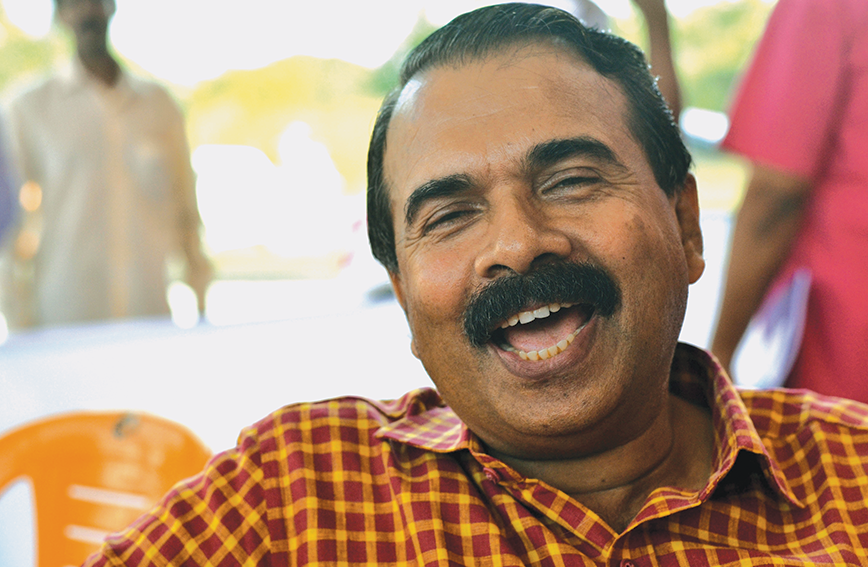 The big question is, what next? How will Mathew and his team ensure that all government departments and financial institutions who converged for the exhibition help the people seeking self-employment?

“I am aware that if I drop the issue here and don’t do any follow-up, just a few candidates will succeed. We will then be back to square one. So we will begin our follow-up action by first sorting out the candidates who registered according to their panchayats,” said Mathew.

“Before we started this event, I talked to the heads of all nine local self- government bodies. We will now request each of them to start a help desk at panchayat level. For three days a month in rotation, they will follow up with the aspirants.”

Mathew said they would study all the facilities and incentives available for self-employment provided by the centre and the state. The panchayats can accordingly design projects to boost self-employment in their areas.

“Each panchayat will then set apart 40 percent of its planned fund for activities that aid self-employment. The total outlay in all the local self-government bodies will come to `4-5 crore. This can be used for creating opportunities for registered candidates,” said Mathew.

Rajesh, President of Pariyaram panchayat, said, “We hope to groom at least five to six people from each of our wards. We can draw on schemes like poultry rearing and vegetable farming. But we will have to back up their efforts until they can sell their products in markets.”

“Ours is a very small panchayat with a population of 14,000,” said Pushpajan, President of Malappattam panchayat, “We have good scope for goat farming, animal husbandry, fish farming and so on. These products will sell at local level also. We will seek the help of all the agencies.”

Mathew is planning to hire graduates from the Institute of Rural Management in Anand, Gujarat, to help the panchayats and those who registered.

He hopes such efforts will have a spin-off effect. “I have created an environment in my area for some sustainable livelihood options. So new seeds have been sown. From now on we need to care for the plants that emerge,” he said.

“Out of the 7,000-plus aspirants, say, only 200 to 300 people eventually begin their own enterprises. That will set an example for others. Another 500 to 600 people will gain the confidence to opt for self-employment the next year by seeing these initial models. Our ambition is to facilitate each family to earn at least Rs 15,000 a month by beginning a small venture.”

The MLA’s own enterprise in organising Samruddhi is also an example that’s being appreciated.

P. Jayaraj, Programme Coordinator at the KVK in Kannur, said that by bringing all the panchayat presidents and municipal chairpersons on board, Mathew has put his initiative on a firm footing.

“At KVK we have many technologies. Unfortunately, these are not used for livelihood activities. Take, for example, the task force for agriculture that helps farming, especially paddy farming. This has already been tested and endorsed. It has potential. We have participatory models of income generating activities like pepper plant production that now has tremendous demand. We also have seasoned mentors who can provide hand-holding,” he said.