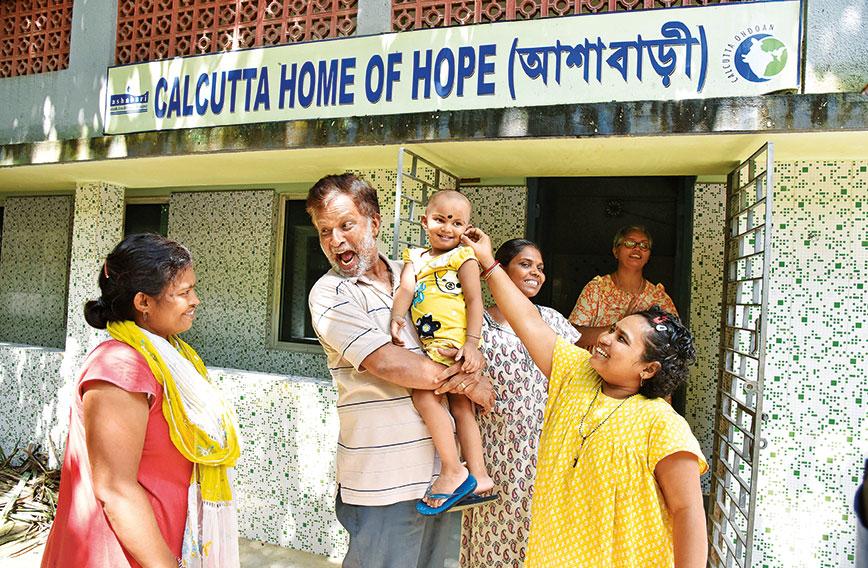 At Ashabari the destitute find a home and hope

Sarita is around three, sweet-looking and healthy. But she was not so when she and her mother, Guria, first came in. She was so emaciated she could hardly walk, her legs bent as if she had polio. Guria is a Muslim from Pilkhana, a large slum in Howrah across the Ganga from Kolkata. A Hindu man from Moradabad in UP had taken her along and there they lived as man and wife.

Then one day the man told her, let’s go live where I work and there you can cook. He put mother and child in the ladies compartment of a train to take them to his workplace and that was the last they saw of him. When Guria got down at Howrah station she had nowhere to go as she did not know her home address or the way to it. Mother and child somehow survived on the city streets until another woman, a former inmate of Ashabari who used to come for free medicines, brought the two there.

Guria giggles like a girl well below her age and is mentally challenged, though with time and treatment has grown better. Seeing the mother’s condition, Joseph Das and his wife have moved the little girl out of the general women’s ward to their own home and there she lives like a granddaughter of the couple. Sarita is clearly very attached to Das and does not seem to have enough of cuddling, perhaps out of an ingrained sense of insecurity.

Manju D’Souza’s story is far different from Guria’s. We catch a glimpse of her sitting at a window in the women’s ward of Ashabari, a dignified greying woman with glasses. It seems she and her son didn’t know where to go after her husband died and ended up with the Missionaries of Charity founded by Mother Teresa. But as the Missionaries won’t accept a person with money (she has a bit), Manju and her son are in Das’ care at Ashabari. As we move on Das tells us that both mother and son are mentally challenged.

Both Guria, who giggles, and Manju, who keeps staring stonily, look mentally challenged. Anup Mahato in the men’s ward is totally different. He looks and is a hundred percent normal, speaks clear English, and has been at Ashabari for over a decade. He is of great help to Das as he drives well and stands by to drive the home’s ambulance when the regular driver is absent. He says he was in the army and his son lives in the US. There seems absolutely nothing wrong with him but for the fact that he is an alcoholic, confides Das, quickly running through whatever money he comes by.

Joseph Das, 67, is the founder and spirit behind Ashabari, Calcutta Home of Hope. He started it nearly two decades ago, in 2000 on Gandhi Jayanti (October 2), to take care of dying destitutes. Over time it has been found that those who are lucky enough to recover from an acute physical condition are often left mentally challenged, needing clinical attention. Thus, Ashabari now also looks after the mentally challenged. There is also an active effort to locate the families of those who have recovered in both mind and body, so that they can be reunited with their families.

Das, a Malayali, first served for 12 years as a member of the Missionaries of Charity Brothers (also founded by Mother Teresa), setting up homes for destitutes all over the country. He worked very closely with Mother in a senior position (he looked after the transport operations of the Missionaries) until he left the organisation shortly before Mother passed away in 1998 and set up Ashabari in 1999. He is married to Lilly Joseph, a nurse by profession, who is Das’s partner in Ashabari. They have an 18-year-old daughter now pursuing her undergraduate studies.

Ashabari is registered as an NGO and runs on philanthropy. The number of inmates at its centre on the outskirts of Kolkata in Amtala, South 24-Parganas district, varies. When we first spoke to Das he said, “Till yesterday there were 120 inmates, but two passed away today and so there are now 118. Actual capacity is around 60-90 but most often there are around 120. Earlier I picked up destitutes from Howrah and Sealdah stations and also Kolkata’s streets. Now I do not go around looking for inmates but take them in when I find them. Most of the present inmates are from around 10 km.” Destitutes are sometimes handed over by the police, in critical condition. Then the caring touch is applied, curative or palliative.

Interestingly, Ashabari began as an outdoor medical clinic before offering a home for the truly left behind. When the home was being constructed, Das recalls, “I found the local people needed a lot of medical care and so passed on to them some unused medicines given by friends. Word spread and soon a weekly clinic, serving around 500 at its peak, got going.” Though public healthcare delivery in the area has improved, the clinic still serves around 100 a week.

“Initially I was doing the job of a doctor with the paramedical training I had received. Then I was joined by a local doctor, Dilip Kumar Golder, and I became his compounder. Then other local doctors came forward to help. Initially they worked for free.” Dr Golder, 58, is unassuming, focuses on general medicine, and is without any specialisation. He admits he is a bit into samaj seva and recalls that it was his father who hand-held him into it, saying that this was a must for a doctor. 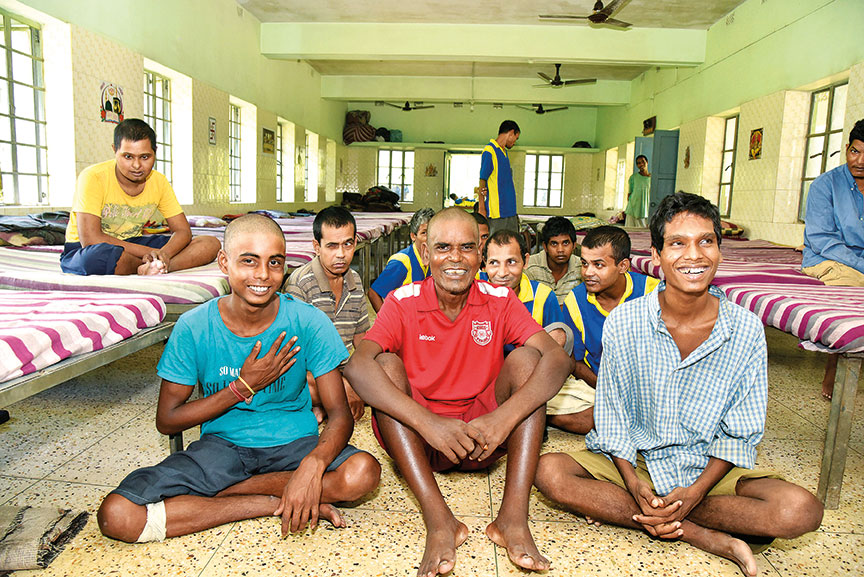 The clean and functional  men's ward

After all these years he still visits the weekly clinic at Ashabari. Basic medical care includes dressing and treating festering maggot-infested wounds that many come with. Those needing in-patient care are admitted into his 25-bed nursing home. The psychiatrist working with him also attends the Saturday clinic. Dr Golder marvels at the transformation that routinely takes place at Ashabari. “When they come in, some of the inmates can hardly speak. Then many recover, are able to say where they come from and go back home.”

Ashabari has always run on donations hence financial ups and downs have been a part of its existence. But for the first 14 years there was no serious problem as there was regular help from a Spanish organisation, Calcutta Ondoan, run by a volunteer couple who worked with Mother Teresa. But this cooperation came to an end around four years ago, in 2014, when the Spanish donors wanted the operation to expand and run with better facilities but Das wanted to run things on a scale which he himself could handle.

Ashabari continues to run on donations from friends in India and abroad. Plus children from two schools periodically help with provisions — Sushila Birla Girls School in Kolkata’s posh Minto Park area and K E Carmel School in the same area run by the Carmelite fathers of Kerala. Ashabari employs 15 people and spends around Rs 3 lakh to Rs 3.5 lakh a year and “at any given time we have resources for a couple of months ahead. I strongly believe I am doing God’s work and he will take care of our needs.”

Every month Ashabari purchases medicines worth Rs 50,000 for free distribution. Significantly, more than half, Rs 30,000, goes in purchasing psychiatric medicines. “We manage because I personally run things,” says Das.

We do most of our talking seated in a large room with a bank of medicine cabinets along one wall, packing cases with medicines on the floor, a sewing machine against another wall and a good part of the room taken up by a long table with several chairs around it. There is also a cupboard in one corner with what looks like the control for a sound and public address system. The room serves as reception, office and weekly clinic. “Every evening I hold a prayer meeting here which is carried by the public address system,” says Das.

To get to Ashabari you have to turn off the Baruipur-Amtala highway down a narrow lane and then go into another narrower lane that can barely take a car. The complex has three buildings, a two-storied one with the men’s wards, another one with the women’s ward and a third one where Das and family and, of course, Sarita live.

The men’s ward on the first floor has a locked iron grill gate. It is opened to let us in. Das says these inmates are mentally challenged and may go astray if the door is kept open. Along an entire side is a long narrow table and bench on which are seated dozens of inmates with anticipation written on their faces. “They know it is meal time and they are waiting for lunch,” says Das. The gate to the women’s ward is not locked and there we meet Mrs Das, who is 60, matronly and jolly.

When I enter the men’s ward my unaccustomed senses detect an odour. I look around and find everything clean and the men bathed and in clean, simple attire. I realise the odour comes from bodies that don’t use talcum powder — a powerful body odour sans the use of personal care products. The whole place is utterly functional, signalling a lower middle class lifestyle, running on enough to meet necessities without a paisa to waste on non-essentials.

It looks a bit run-down, no wonder because financial support has been unpredictable for four years now. But then fresh construction is going on in two buildings. Ashabari is able to save on costs because some of the older inmates who are recovered help look after the newer ones who need personal care.

Financial trouble is not the only hurdle Ashabari has faced. At one time there were as many as 3,000 women, members of bank-linked self-help groups (SHGs), helped by dedicated Ashabari staff, pursuing a range of income earning activities. But it was discovered that the staff were selling chit fund products to the women. When asked to stop, they went on strike. Das then shut down this programme, though some of the women are still with SHGs on their own.

Since Das is pushing 70 I ask him about succession planning. Mrs Das is able to run the place well on her own even when he is away for a longish period like a month. As for the longer-term future, Das comes up with a reply classically his, “God knows.” He means it, quite literally.