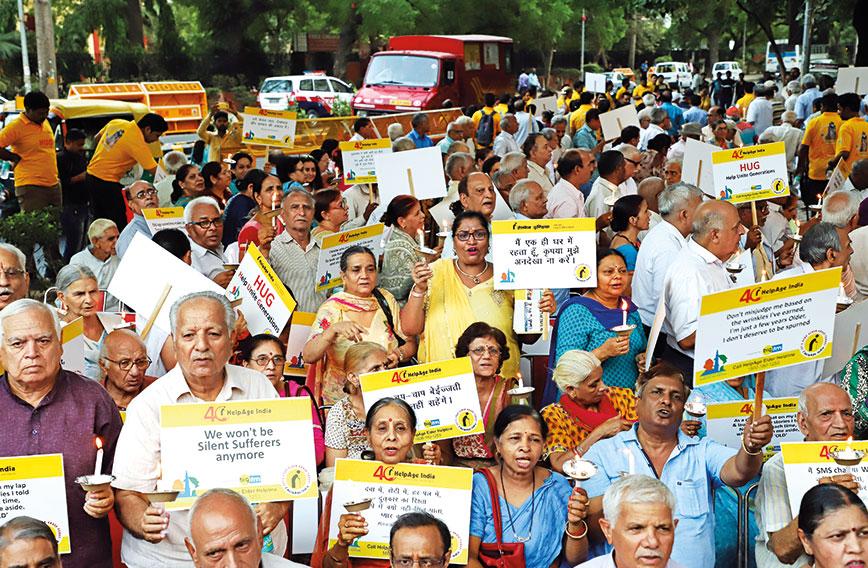 A candlelight protest by elders in New Delhi

With worrisome regularity, news stories have been appearing of the elderly being subjected to harassment and abuse. Apart from the odd robbery or eviction bid, their tormentors tend to come from within their families and are often their own children.

It is fairly certain that for every episode that gets reported there are innumerable others that don’t make the news. The old find it socially embarrassing to talk about their problems, especially when family members are the perpetrators. Many suffer silently because they don’t know how to make formal complaints and are unaware of the legal provisions for their protection.

What then is the extent of the insecurity elders face in India? Is it worse in the north than in the south? Is it just about property and inheritance? Or are there more complex scenarios resulting from changing values and lifestyles?

To get some idea of what is going on, Helpage India, a non-profit which works for the elderly, has gone out and done a survey across a large number of cities, asking elderly men and women how they see abuse and what they do about it when it surfaces in their daily lives.  It is in urban areas that the elderly feel threatened and isolated. In rural areas they find space and continuity in extended households.

Predictably, the results of Helpage’s survey show a growing sense of insecurity among the elderly in cities with 25 percent admitting that they had actually faced abuse in their own lives. More than 60 percent of the respondents felt that elder abuse existed in the country. Of them, 43 percent said it was high, 44 percent moderate and just 12 percent, low.

The majority said that verbal abuse and disrespect were the most common forms of harassment they faced. But there were also those who spoke of beating and slapping, plain neglect and economic abandonment. A significant number spoke of unwanted sexual advances.

The perception of elder abuse in society was highest in Delhi at 87.2 percent with Bhubaneswar coming a close second at 86.7 percent followed by Ahmedabad at 86.2 and Kolkata at 85.8. The numbers get smaller for the other cities but the survey shows that elder abuse is a significant problem across the cities it has covered.

The survey says sons and daughters-in-law are the main perpetrators of the abuse. The median age of the perpetrators is 42 and they are reasonably well-educated.

Elders with whom intensive interviews were conducted as a part of the survey cited property as the main reasons for being abused. Other reasons were that their children wanted to live separately, did not like their way of living,  regarded them as a burden and lacked the economic resources to take care of them.

Instances of abuse were embarrassing because they involved close family like the son and daughter-in-law and consequently the majority of the elderly chose not to report it so as to maintain confidentiality. But when they did speak to someone it was to a friend followed by a relative and lastly to the police. A significantly large number of the elderly surveyed just did not know how to deal with the problem and did not know about their rights under the law.

Asked what they felt was the answer, 37 percent of the respondents said that economic independence would help. If the elderly had their sources of income, they wouldn’t be beholden to younger people who either didn’t want to spend on them or had financial problems of their own and didn’t have the money to spare.

They also felt that it would help to have better legal and  social reporting systems. It was important to be able to easily go to someone for help. Easy reporting would be a deterrent to their tormentors.

Another solution was sensitising children and young adults and finding ways to bridge the gap between generations so that the young could be more appreciative of the elderly and understand their dependence on society. It was important to have a culture in which the elderly were valued even as younger people got on with their lives.

Mistreatment of them as being witnessed now can be expected to increase proportionately and should be addressed socially and legally. It is also important to prepare, in economic and administrative terms, for meeting the needs of a large elder population.

Rapid urban expansion together with the collapse of services that is being witnessed today is the script of the problems that the elderly are experiencing. How they travel, access healthcare and deploy their savings are all crucial to their well-being and emotional stability.

The Helpage survey covered Tier 1 and Tier 2 cities, conducting 5,014 quantitative interviews and 230 in-depth interviews. Is that enough? Perhaps not. We also don’t know how thorough the process was. But an important and useful contribution has been made with limited resources. The findings are also reinforced by what is anecdotally known. Helpage assists the elderly in dealing with real-life situations. Such outreach is complex and challenging for a non-profit. Even so, Helpage goes about its role purposefully and it is essential to see in its experience the real extent of the problem.