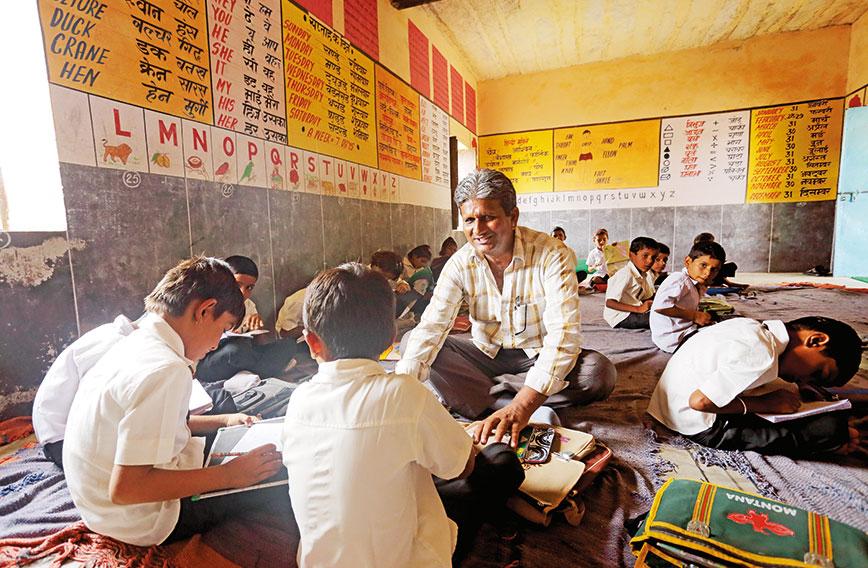 School official with no power

I was excited to visit this Model Senior Secondary Government School in one of the blocks in Rajasthan because a colleague from the Azim Premji Foundation was holding a discussion with a group of teachers on a subject that combined several issues in science and social science. This is typical of our work in the capacity enhancement of teachers in public schools. Instead of merely focussing on the content of various subjects, we make an effort to build teachers’ perspective on the role and essence of education as enunciated in the National Policy of Education as well as in the National Curriculum Framework.

Today’s session was no exception. We picked up the topic of adulteration in food items in the market that covered issues of chemistry, physics, biology, integrity, equity, economics, law and governance related to such adulteration. The responses of the teachers were incisive and indicated they were understanding the integrated approach that was being presented to them. In turn, we were seeing the prospect of teachers changing their teaching-learning practices in schools and classrooms.

The Panchayat Elementary Education Officer (PEEO) who made it a point to be present for the session appeared pretty pleased with what was happening with the teachers. While he belonged to another Adarsh (Model) School, he had travelled 10 kilometres to be present for this interaction and to meet my colleague and me.

Sometime in 2009 or so, in a major structural change on the ground (that was to have long-term implications on education), the state government of Rajasthan abolished the position of Cluster Resource Persons (CRPs), Cluster Resource Coordinators (CRCs) and the like, and sent them back to schools as teachers. The position of Block and Cluster Resource Person was created vide the National Policy for Education, 1986, to provide academic support to schools within a cluster. However, in most states, it failed to provide quality academic support for multiple reasons such as not having developed the necessary competence among the CRPs, loading them with a plethora of administrative jobs in addition to not enabling them to travel to various schools that they were to support, and so on.

The creation of the position of a PEEO in Rajasthan about a year ago, therefore, came as a blessing both structurally and academically. This has the potential to ensure effective decentralisation of school education by providing both academic and administrative authority to the PEEO to ensure quality among schools within a panchayat. More important, PEEOs are persons who are closely connected with ground realities since they are also the principals of an Adarsh School in the panchayat. The PEEOs will be responsible for the learning outcomes and results of the schools and have the authority to visit (inspect) schools, take decisions on leave and salary-related issues of teachers, and so on. Given the scale and size of our geography, it was impossible for a Block Education Officer to be responsible for all the schools in the block (around 175 to 200 schools). The PEEO’s span of control is thus far more manageable with 10-16 schools in the panchayat.

Several other positive steps have been taken by the Rajasthan government in the past few years — the most important being appointment of a significant number of teachers (after a hiatus of almost 10 years) and strengthening the infrastructure in schools.

The PEEO whom we were interacting with in the school was a wise, sincere, committed and hardworking individual who has been teaching in schools for over 30 years. He was determined to make a difference to the children in government schools. He was very articulate and outspoken in a responsible manner. He held a clear view that any step that the government or school principals or teachers take must eventually contribute to children learning better and becoming better human beings. For him, it was a mixed bag, since too many actions were being taken simultaneously — making it impossible to assess which step was contributing to better quality. While he was happy with the appointment of new teachers, he was terribly upset with the indiscriminate transfer of teachers — some even in the middle of the academic year. In his own Adarsh School, for instance, earlier he had 17 teachers but after the appointment of new teachers and the transfer of existing teachers to higher secondary schools, he was left with only seven.

As a result, his workload has increased so much that he ends up sleeping just about four to five hours every night and his 80-year-old mother has told him to quit the job which, of course, he cannot do because of his commitment. So what are the critical issues? One, he gets no time to contribute to his core area of competence and preference of work in the academic domain. His reading up on new stuff has almost stopped. Two, he is burdened with all kinds of administrative responsibilities (like maintenance of schools, administrative matters including record-keeping) with no help from the system at all. Consequently, he ends up taking work home and burns the midnight oil to cope with his daily responsibilities. Three, shortage of teachers has led to making all kinds of unhealthy adjustments in schools, classrooms, and so on, leading to an adverse influence on the results of the school. He lamented that after more than 70 years of Independence, we have failed to provide one classroom per grade and one teacher per classroom.

He narrated how senior officers hold meetings in the state capital and blame the juniors working on the ground for the lack of quality in education. He was surprised to observe the behaviour of “no resistance” by the juniors at such meetings. Later, he realised that the juniors have consciously adopted the strategy of simply listening to such blame without offering any contrary view. They know that the seniors have no understanding of the ground situation. The seniors neither appreciate the difficulties of the system nor are they interested in solving the issues permanently. These officers behave like children in the doctor’s clinic. Their approach is “yes, it is going to cause pain but get it over with as painlessly and as quickly as possible”.

In one such meeting, the PEEO told the seniormost person that quality in education would not be achieved since the top management was not serious about quality. He pointed out that, for the leadership, the mid-day meal programme is of far higher priority as compared to children not learning or the school not having a sufficient number of teachers. Not only was the senior officer not sympathetic, his own colleagues blamed him for having raised the issue and wasted their time.

This is a great example of how, after having taken the right step by creating the PEEO role, the state is not reaping the best benefits of its action by not empowering the post. Our nation, for the past seven decades, has seen several well-intentioned and great programmes failing due to either inappropriate execution of those programmes or not resourcing them well to make them truly effective. It is just a string of “missed opportunities” after having created such opportunities.