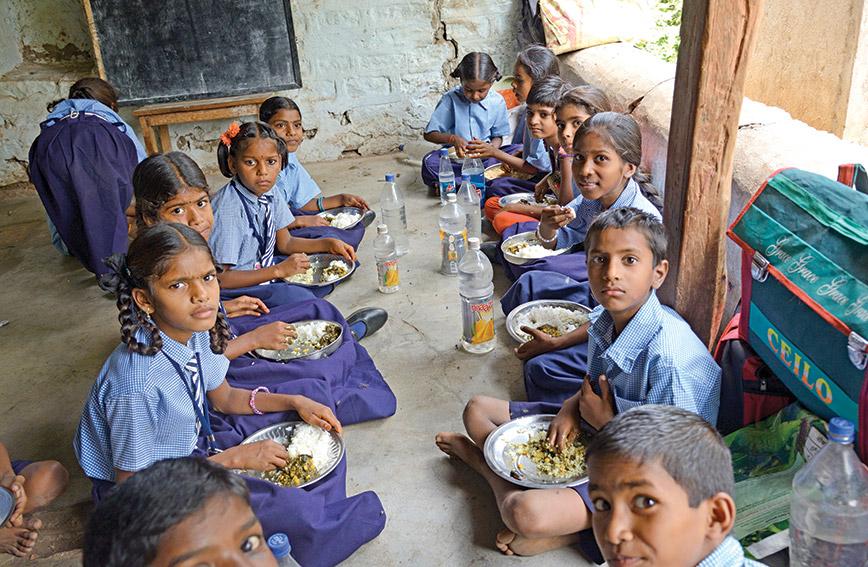 It is possible for midday meal scheme to improve

My son fell sick on his first birthday and we were rather disappointed since he was in no mood to play with the children who had been invited home. Even his pictures taken on the occasion clearly showed the discomfort he was experiencing. This was the beginning of an infection in his alimentary canal that went undetected for a few months. He became a cranky child, totally disinterested in normal activities. The infection grew out of control and one night he had to be hospitalised. After four days in hospital and a month of recuperation, he was back to being his joyful self. This was our first-hand experience of what ill health can do to a child.

During my visits to several thousand government schools and classrooms I have observed children who apparently looked sick and were therefore unable to focus on classroom activities. It took some time for me to realise that the key reasons for their ill health were malnutrition and various infections. I was shocked when I first learnt that over 44 percent of Indian children below the age of four years are malnourished.

India’s commitment to the Midday Meal Scheme has to be viewed from this perspective. This programme is among the most important programmes contributing to child development at an appropriate phase in life.

The movement to provide meals or some kind of nutrition began as a trickle in parts of India in the mid-1920s. Madras Corporation was among the first to launch a nutrition programme. On 15 August 1995, a National Programme of Nutritional Support to Primary Education was launched across 2,400 blocks which was then expanded to all blocks in the country by 1997-98. Initially, the programme consisted of only free supply of foodgrain at 100 gm per child per school day, and subsidy for transportation of foodgrain up to a maximum of Rs 50 per quintal.

On 28 November 2001, the Supreme Court passed an interim order consolidating the eight food security schemes into entitlements of the poor. Its most significant component was the directive to the state governments to implement the Midday Meal Scheme by providing every child in government primary schools (including aided schools) with a prepared midday meal that included 300 calories and 8-12 gm of protein each day for a minimum of 200 days per year.

In September 2004 the scheme was revised into a ‘cooked midday meal programme’, with the same nutritional value; this was in addition to supply of free grain. There was also a provision for midday meals during the summer vacation in drought-affected areas. In October 2007, the name of the programme was changed from National Programme of Nutritional Support to Primary Education to National Programme of Mid-Day Meal in Schools. From 1 April 2008, the scheme was extended across the country for Classes 1 to 8. By 2014, about 104.5 million children in 1.2 million elementary schools were covered by the programme. Many states have extended the scheme up to Class 10. It is common knowledge that in addition to the children enrolled in school, their younger siblings often accompany them and are served the same meal by schools.

The current specifications prescribed by the government under the programme are:

For many children, the midday meal is the only decent meal that is assured to them. The evening meal depends on whether their parents, often daily wage earners, get employment on that day. However, the implementation of the midday meal programme differs vastly in various states and, while this important programme has moved in the right direction, it suffers from non-adherence to the commitment, primarily for two critical reasons — inadequate budgets and execution deficiencies. 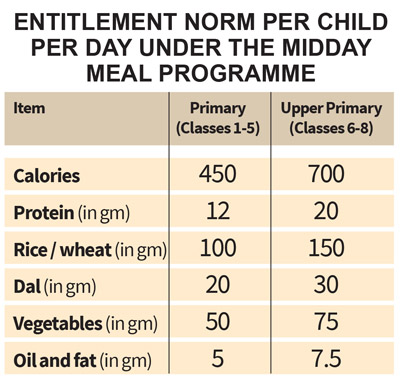 In addition to the above budgets, separate provisions are made for the honorarium of the cook or cook-cum-helper ranging from Rs 1,000 to Rs 2,500 per month per school.

Enhanced budget: The Azim Premji Foundation runs six schools in rural areas of four states on exactly the same basis as government schools run for the children of disadvantaged communities. Based on our experience on the ground we can state that current government budgets need to be enhanced by more than double. Even the cost of the Akshaya Patra meal (one of the largest private programmes providing midday meals) with an efficient centralised kitchen is much more than the government budget. Budgets have to be provided for every component of the programme from foodgrain and vegetable purchase, storage costs, cook and assistant cook’s salaries, fuel for cooking, and so on.

Delivering nutritional commitments: Under no circumstances should we forget the original purpose of the midday meal programme: nutrition of a certain threshold level — 450-700 calories, 12 gm of protein and micronutrients. We must ensure delivery of these nutritional values by systematic structuring of menus each day — to include these nutrients. The health of the children is supreme.

Management of midday meals: Logistics and hygienic storage of foodgrain for the purpose of cooking a healthy meal is critical. Most schools do not have adequate storage facilities and necessary staff to cook hot meals. There are intricate issues of head teachers and teachers spending significant time ensuring the meal. It is often stated (sarcastically) that for the education department, the criticality of the midday meal is far higher than the learning levels of the children. There are issues such as delays in reimbursement of expenses, quality of grains, absence of vegetables, pilferage of allotted grains, and the like. It is possible to streamline all these through robust management systems and decentralisation of responsibilities coupled with effective deployment of technology.

Monitoring and grievance redressal: Effective management of any programme includes providing for management/monitoring mechanism and costs for the same. It needs a will to act on the findings of the monitoring organisation. It needs frequent rationalisation of various arrangements involving logistics, storage, indexing of costs and actual delivery of nutritional values. The monitoring committee must also listen to the grievances of stakeholders and act on them. Best practices across states and schools must be shared with all.

The Midday Meal Scheme is an integral part of the holistic development of the child in the early years of growth. The nation has made a commitment and the implementation so far is in the right direction. We must make it work under any circumstances!